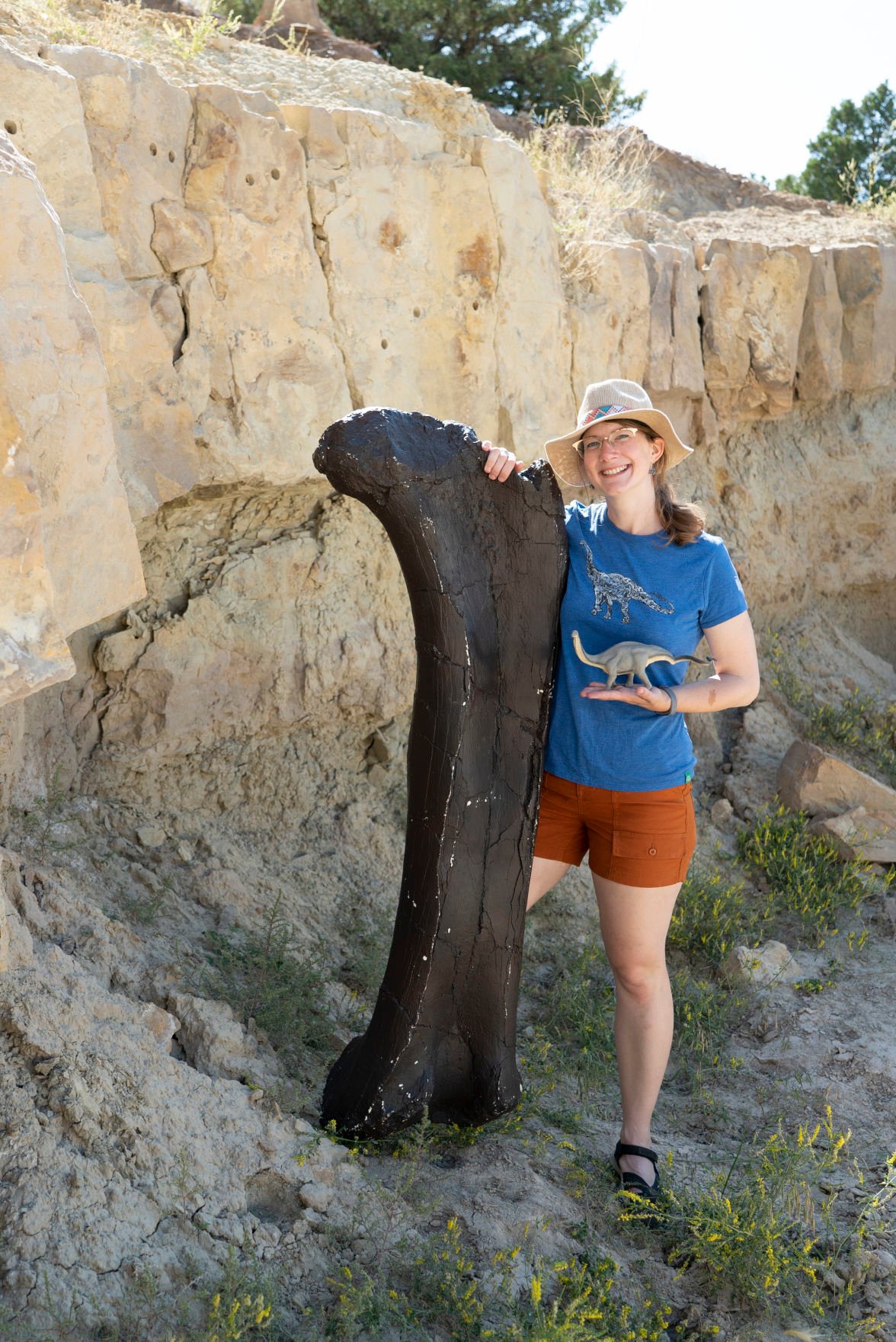 Emily Graslie is shown at a sauropod quarry near Bozeman, Mont., on the "Prehistoric Road Trip." The three-episode series begins airing June 17 on SDPB. 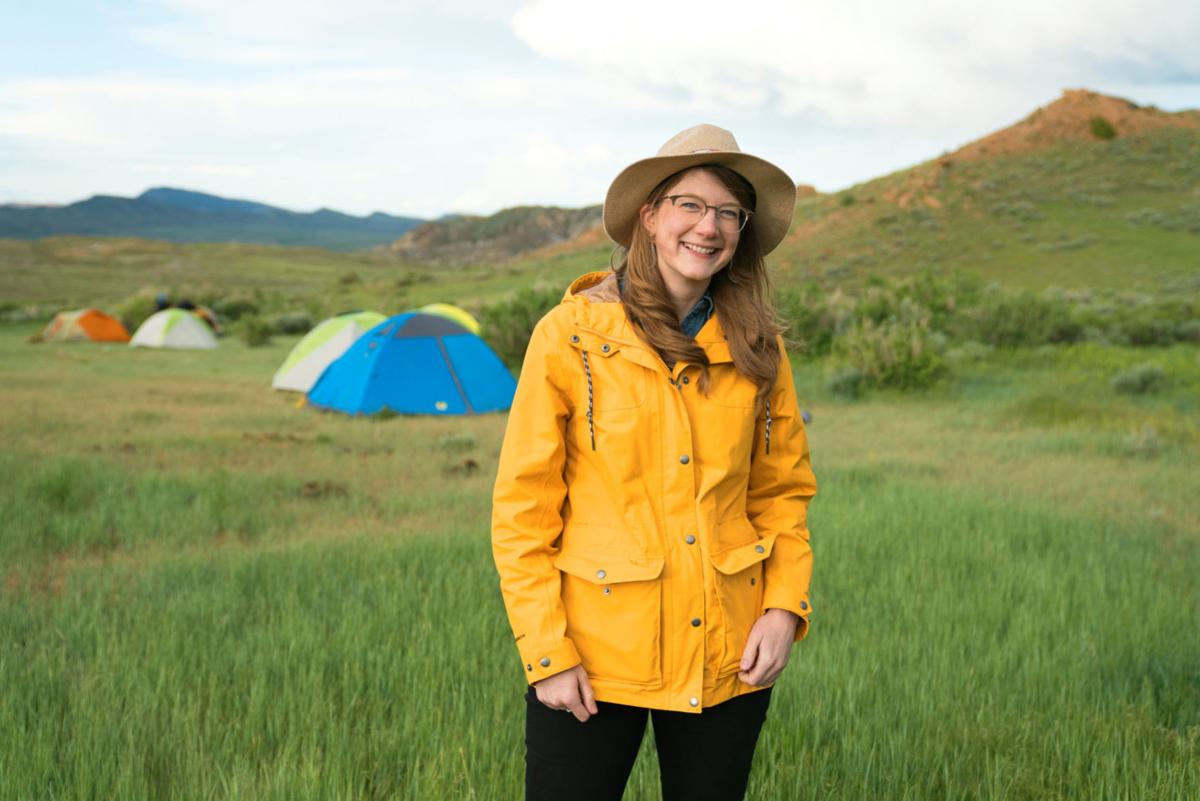 Emily Graslie’s “Prehistoric Road Trip” is a wild ride exploring three billion years of history across 2,000 miles of the Northern Plains, and everyone is invited.

“Prehistoric Road Trip” takes viewers some of the nation’s most active fossil sites. Graslie guides the way through Montana, Nebraska, Wyoming, Illinois, and North and South Dakota, including a stop on her family’s ranch near Faith. Along the way, she discovers facts about North America’s dinosaur period and uncover fossils of plants, mammoths, early mammals and more.

“It’s such a personal project, and I hope other Rapid Citians and those in western South Dakota will learn something new about the area, and ‘Prehistoric Road Show’ fosters appreciation for the amazing scientific research that comes out of the Black Hills,” Graslie said. “There are fossils from South Dakota that can be seen in museums around the world.”

South Dakota Public Broadcasting also will host a live virtual screening and presentation with Graslie at 6 p.m. on Wednesday. It can be viewed at facebook.com/SoDakPB/ or sdpb.org.

“Prehistoric Road Trip” has evolved out of Graslie’s unique career as a science communicator. She launched and still produces the educational YouTube series “The Brain Scoop.” That led to her job as Chief Curiosity Correspondent at The Field Museum of Natural History in Chicago, a position created for her that she’s held since 2013.

“Prehistoric Road Trip” has been in the works since 2017, when Chicago PBS station WWTW met Graslie and asked if she’d ever considered making an hour-long TV show. Graslie initially pitched an idea inspired by her home state and family.

“My grandfather was a huge dinosaur fan,” she said. “My family has ranch land near Faith about five miles from where Sue (the famous T.Rex) was found. I always wondered if dinosaurs were out there. … How cool would it be to find the next Sue?”

For “Prehistoric Road Trip,” Graslie’s parents, Tom and Carol Graslie, did let their daughter explore their land, though it turned out not to have topography and geography conducive to finding fossils, Graslie said.

Still, including South Dakota in “Prehistoric Road Trip” excites Graslie. The series is sponsored in part by The Mammoth Site and Badlands National Park Conservancy, and Graslie interviewed scientists and educators from the Badlands, the Mammoth Site, and Oglala Lakota College for the South Dakota segments.

“South Dakota has some of the best fossil deposits in the world. You have the Badlands, the mammoths in Hot Springs. It’s unheard of to have such great fossils located within a two-hour drive of one another, representing such a vast range of geographic time,” she said.

“Being able to return to my home state and celebrate how special we are has been really important to me personally,” Graslie said. “We don’t often see South Dakota celebrated on the national stage, especially as a place of great scientific accomplishment, which it is. The Museum of Geology at School of Mines and School of Mines in general is an amazing place. It’s the only institution in the country where you can get a master’s degree in paleontology. SDSMT has a relationship with Badlands National Park that precedes the park even before it was established as a national monument.”

“Everywhere we went, we tried to show and celebrate that there’s so much more to this part of the country. I think South Dakotans will hopefully feel a sense of pride in their state and their legacy. And I hope it teaches more people in the state about the land that they’re walking on,” she said.

Graslie wrote and is the executive producer for “Prehistoric Road Trip,” which grew to encompass several states because WWTW executives urged Graslie to create a series with nationwide appeal. In 2018, she and co-producer Ally Gimbel set out on a scouting road trip to choose locations.

“We needed to narrow the scope and find the parameters. We wanted to get the widest range of geologic exposures possible,” Graslie said. “We looked at how much geological time we could find if we focused on (the Northern Great Plains) and started plotting all the places we wanted to go. From there, we knew if you were a viewer watching this, you’re probably not going to take eight weeks off to do so. We drew a circle on a map that spanned 2,000 miles and the majority of places we wanted to go. Within that giant circle you can visit at least two billion years of Earth’s history at different formations.”

Graslie highlights sites that are available to the public and locations where researchers are doing paleontology field work. After nine months of planning, Graslie and a crew set out for nine weeks of filming. Graslie celebrated her 30th birthday during the filming.

Graslie admits the scope of the project was daunting. “My focus has been making 10-minute videos about single topics (for The Brain Scoop). This is a completely different undertaking. It’s so much more vast in terms of time. The scope of the project is a three-hour program about hundreds of millions of years of the Earth’s history. What was I thinking?” she said, laughing.

“What surprised me the most was how well we were able to pull (the filming) off. There was almost nothing we didn’t accomplish we wanted to. We didn’t have a single cancellation. … It was amazing we were able to film at almost 40 locations with 60 people across five states without any major mishaps,” Graslie said. “I was so impressed with the preparedness of everybody we worked with.”

“I’ve put everything I’ve got into this show,” she said. “If given the chance to do another program, I absolutely would do it with the same level of scientific rigor and sense of responsibility. I hope I get to do something like this again."

Nick Cordero, a Broadway actor who had admirers across the world rallying for his recovery, has died after a battle with COVID-19, his wife Amanda Kloots said.

Country music firebrand and fiddler Charlie Daniels, who had a hit with "Devil Went Down to Georgia,"' has died at age 83.

LOS ANGELES (AP) — Authorities said Thursday that they believe “Glee” star Naya Rivera drowned in a Southern California lake but they are continuing the search for her a day after her 4-year-old son was found alone in a rented boat.

LONDON (AP) — Johnny Depp said in a London court on Friday that he was left embittered by ex-wife Amber Heard's claims he abused her, which turned him from “Cinderella to Quasimodo” in the public eye.

Naked men and drunks: England assesses the reopening of pubs

LONDON (AP) — It seems to have been more like a typical Saturday night than a drunken New Year's Eve.

NEW YORK (AP) — Tony Award-nominated actor Nick Cordero, who specialized in playing tough guys on Broadway in such shows as “Waitress,” “A Bronx Tale” and “Bullets Over Broadway,” has died in Los Angeles after suffering severe medical complications after contracting the coronavirus. He was 41.

MURFREESBORO, Tenn. (AP) — Country stars, veterans and longtime friends talked about the faith and patriotism of Charlie Daniels at a funeral Friday for the country singer and fiddler.

Jada and Will Smith reveal marriage trouble on Facebook show

LOS ANGELES (AP) — With their marriage under social-media scrutiny, Jada Pinkett Smith and Will Smith reaffirmed their commitment to each other as Pinkett Smith admitted to having a relationship with musician August Alsina when she and Smith were separated.

WASHINGTON (AP) — The government on Monday identified roughly 650,000 mostly small businesses and nonprofits that received taxpayer money through a federal program that was designed to soften job losses from the coronavirus but also benefited wealthy, well-connected companies and some celebrity owned firms.

Here's a collection of what's arriving on TV, streaming services and music platforms this week.

Movies in a Minute: 'Greyhound'

How to safely road trip this summer

How to safely road trip this summer

The Harvest   (From “Days of Heaven")

The Harvest   (From “Days of Heaven")

Emily Graslie is shown at a sauropod quarry near Bozeman, Mont., on the "Prehistoric Road Trip." The three-episode series begins airing June 17 on SDPB.