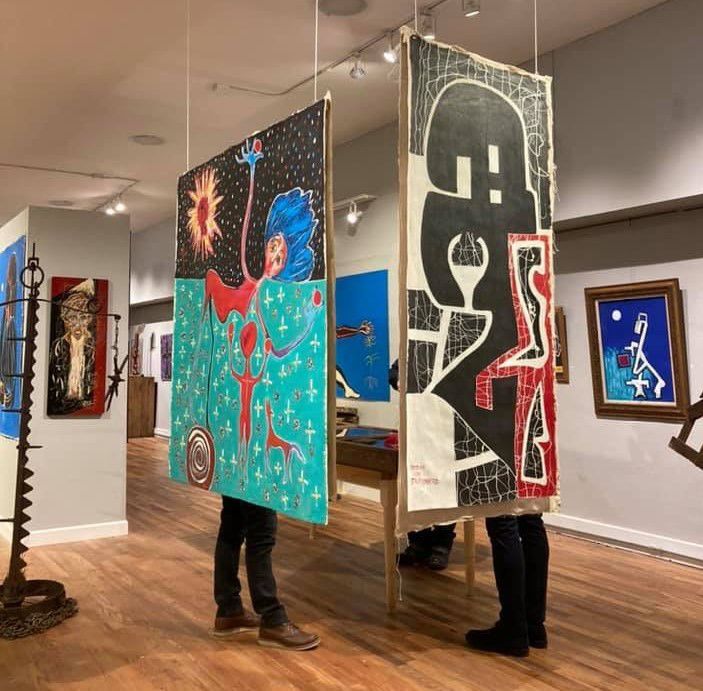 Visitors to Gallery Six13 examine some of Rodney Bode's larger art. About 30 pieces of Bode’s work have sold since his exhibit opened, and news of his work is starting to attract attention from collectors, gallery co-owner Greg Geiger said. 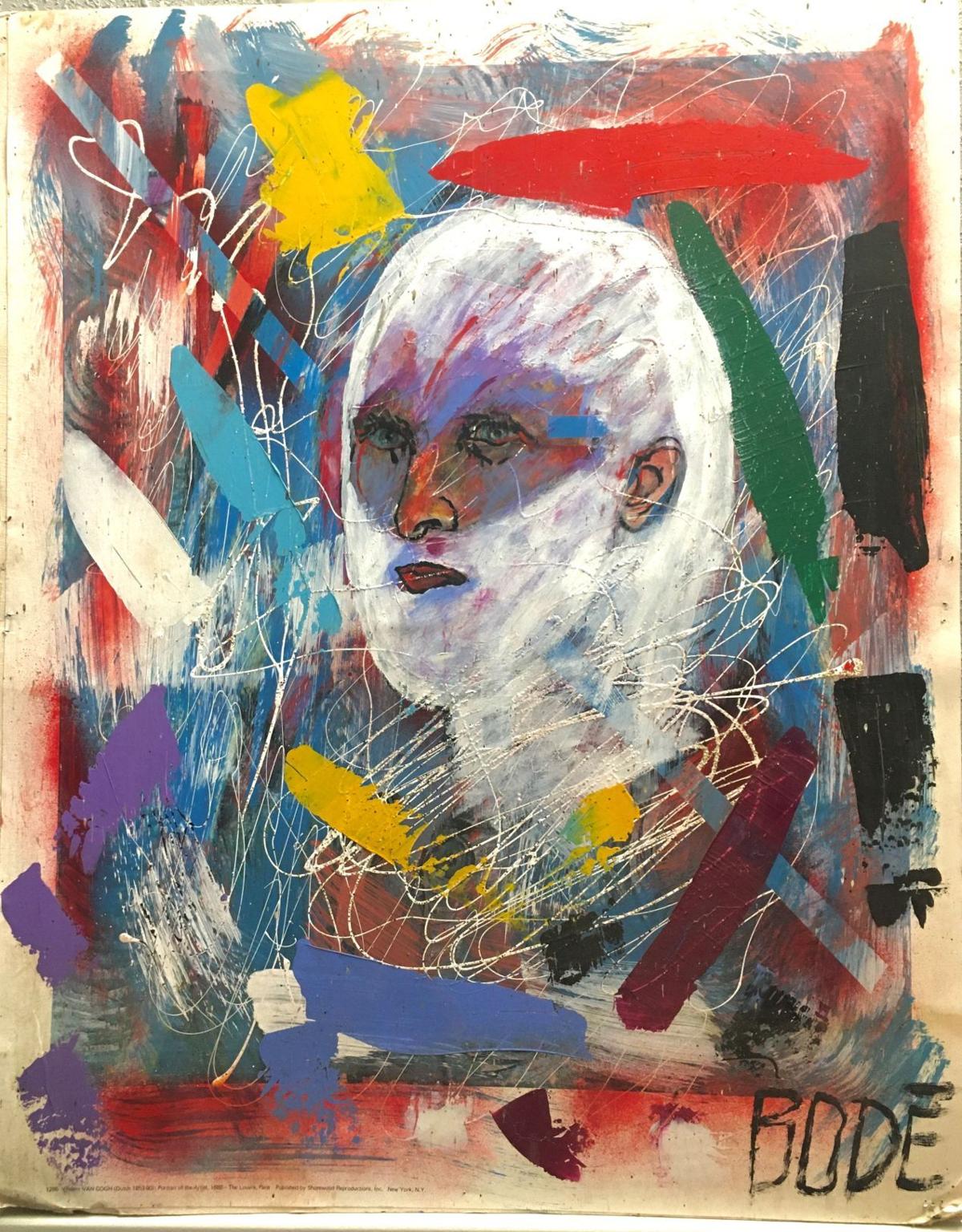 Rodney Bode's work falls into the category of outsider art. Like Bode, outsider artists typically are self-taught, tend to be loners who are reclusive, and typically struggle with mental illnesses, according to Gallery Six13 co-owner Greg Geiger. 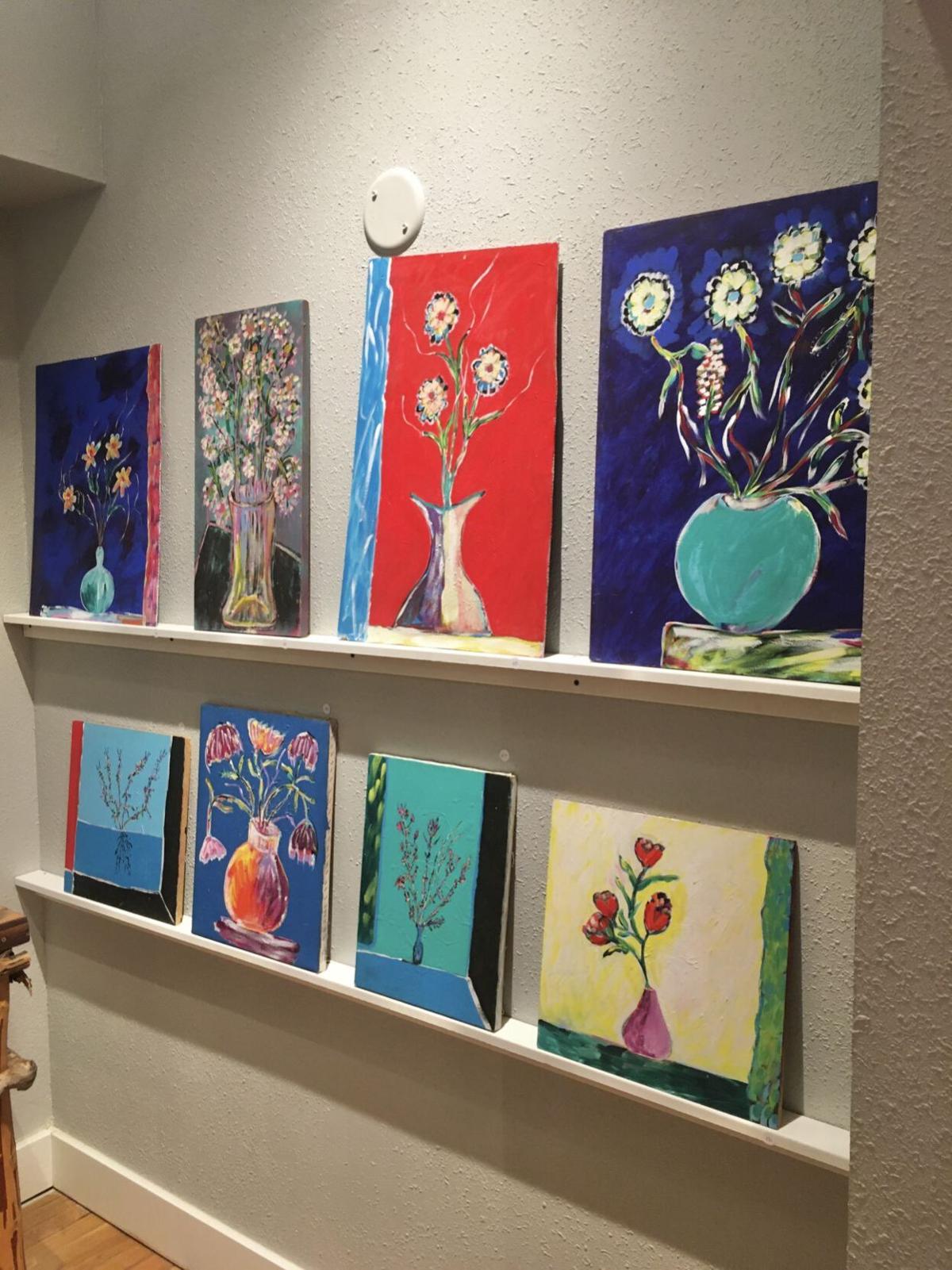 A collection of Rodney Bode's smaller paintings are seen on display at Gallery Six13 in downtown Rapid City. 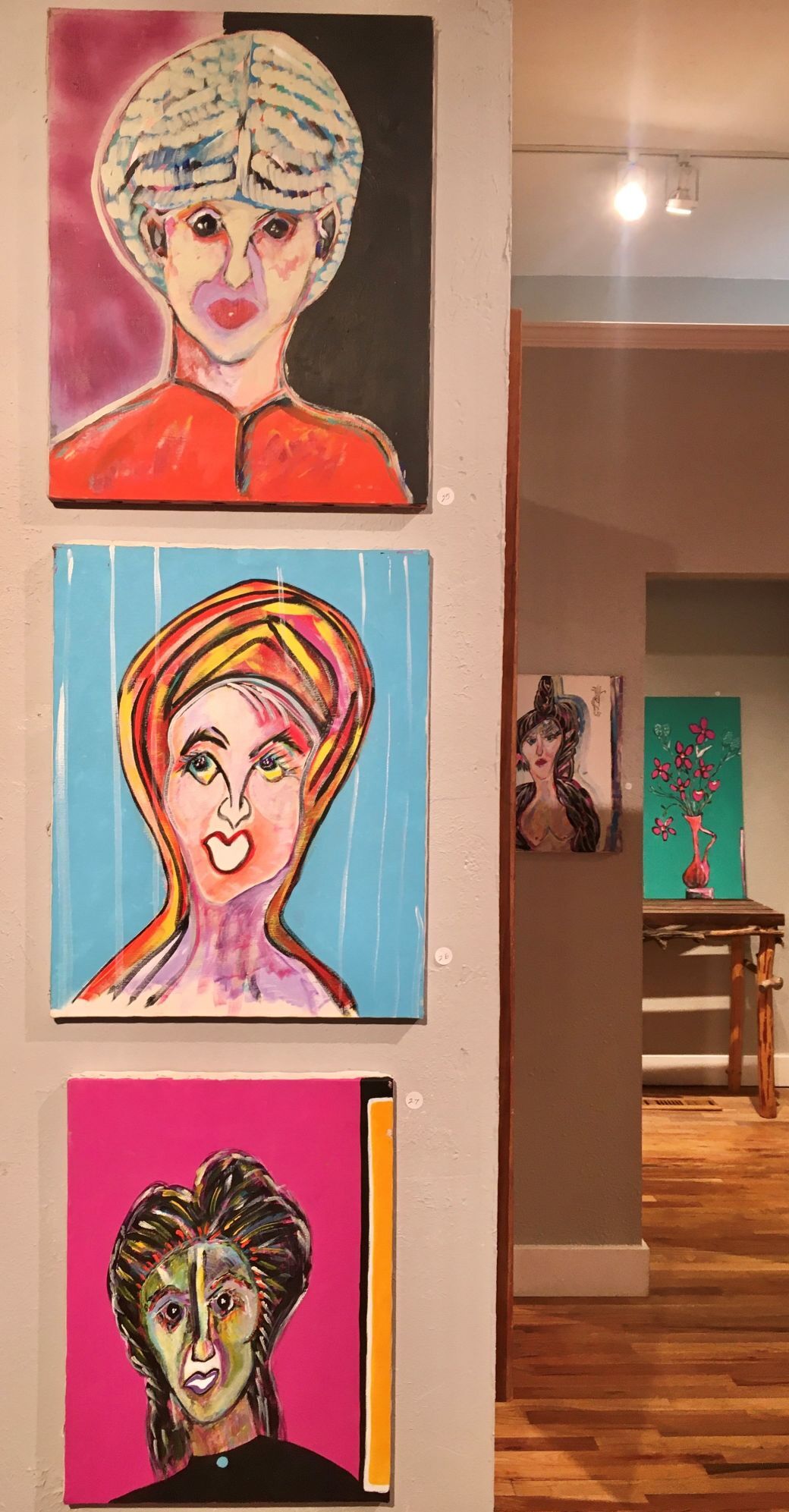 A series of portraits are part of Rodney Bode's eclectic body of artwork.

The newest exhibit at Gallery Six13 is a journey through the mind of a former Butte County rancher, Rodney Bode, who has spent his life grappling with mental illness.

Bode’s art is on display in the downtown Rapid City gallery through Nov. 20. The exhibit highlights four decades of 80-year-old Bode’s work, which was almost unknown until it was discovered at his ranch last fall.

“The collection is about 250 paintings, about 50 sculptures, 40 hand-made knives,” said Greg Geiger, who co-owns Gallery Six13 with Jay Pond. “He also had all kinds of sketches and four little booklets of poetry, which is kind of enlightening. … We are only showing half of the collection due to the limitations of our gallery space.”

Bode is entirely self-taught and before this exhibit was largely an unknown artist. His art shows influences from Picasso, Cézanne, art history, Native American culture, mysticism and religion.

Bode’s work falls into the category of “outsider art,” created by artists who are outside the mainstream art world. Geiger said Bode is the first documented outsider artist in South Dakota.

This exhibit and the sales of Bode’s art are a joint effort between Gallery Six13 and Bode’s guardian and conservator, Jenny Schmidt of Black Hills Advocate. Bode lives in a care facility in Yankton, and sales of his art will help pay for his care for the rest of his life.

In addition to the exhibit, Rapid City-based filmmaker Randal Iverson has made a short documentary, titled “Bode,” that will air on South Dakota Public Television in December.

Though Black Hills Advocate typically does not share personal details about their clients, in this instance, Schmidt said Bode’s lawyer approved telling his story to raise awareness about Bode and his art.

“When we take on the responsibility of caring for a person, we are usually not able to tell their story. But in this case, Rod’s asset is his art,” Schmidt said. “We have a duty to liquidate his assets and use those for his care, so in his case, we can’t market the art if no one knows about it, so we had to tell his story.”

Schmidt said Bode has schizoaffective disorder, a condition that can include delusion, hallucination, disorganized speech and behavior, and diminished emotional expression. His brain also shows the impact of vascular dementia, which leads to irreversible, worsening cognitive changes.

Schmidt learned from his neighbors that Bode and his wife moved from Idaho to South Dakota. They lived on a small ranch they owned near Nisland. Neighbors said Bode had a small herd of Arabian stallions he bred and sold. He also had a llama and a donkey. Bode’s neighbors didn’t know he was a prolific artist.

Bode’s wife, Renee, worked at the Rapid City Post Office. The Bodes mostly kept to themselves, although one of Renee’s co-workers, Nancy Sullivan, visited the Bodes in 2017. Sullivan took what may be the last known photo of the couple, Geiger said, and she saw much of his art that filled the kitchen, hallways, living room and basement when Renee gave her a tour of the house.

Bode began to decline physically and mentally after Renee died in January 2019.

“When she died, he didn’t have his anchor anymore,” Schmidt said.

Neighbors said his ability to care for himself and his animals diminished and Bode became mentally unstable as his dementia worsened. Ultimately, the Butte County Sheriff’s Office had to intervene and contacted Schmidt for help. Schmidt was appointed Bode’s guardian and conservator.

When Schmidt visited Bode’s house for the first time, Bode’s artwork and library were exactly as he’d left them, with art throughout the house.

“We stumbled on something unique. … He was very much an introvert. He kept to himself and he had his own little world out there. It was not what any of us expected to find,” Schmidt said.

Gallery Six13 has been put in charge of cataloguing, storing and selling Bode’s work, a find Geiger describes as "hard to believe."

“Jay and I drove up (to Bode’s ranch) and right away we were met with three really large sculptures,” Geiger said. “Behind the ranch house is a geodome made out of cement, a cool big old dome, and inside there he had more sculptures and more artwork. … Especially at anybody’s ranch in South Dakota, you don’t expect to see those things outdoors.”

Inside the house, “art was lining the hallways and it was on the walls and (lined up) on the floors. We went downstairs and found his studio for painting, and that’s where a lot of work was hanging from joists and stapled to the walls and also there was a large pile of archived artwork,” Geiger said.

“As we walked through, I saw an artist growing his talent. His early faces were a struggle, but later on, he had more ability. And even later, he added narratives and symbolism. There’s a ton of story in this work. We felt wave after wave of excitement,” Geiger said.

The gallery created a website for Bode’s work, rodneybode.com, where visitors can also view the documentary “Bode.” In February, Geiger plans to take Bode’s work to an outsider artists’ fair in New York. Christie’s Auction House will be having an outsider art auction, so Geiger hopes those two events will introduce Bode’s work to the New York art world.

“When we become ill, we go down a road we might not have planned for,” Schmidt said. “That’s what happened to Rod. But his exhibit looks incredible, and it’s an honor to serve him in this way. … I’m really tickled to be part of such a unique, cool story. To be able to tell a story of a person and a South Dakota artist has been such a pleasure.”

Schmidt and the gallery owners also would like to gather as much information as they can about Bode and his life. Anyone who knows or knew Bode and would like to share more information can contact rodneybode.com or blackhillsadvocate.com.

Grab some popcorn and enjoy this year’s Black Hills Film Festival from the comfort of your couch, in a movie theater, or both. The 2022 film f…

Louie Anderson, whose four-decade career as a comedian and actor included his Emmy-winning performance as mom to twin adult sons in the TV series "Baskets," has died.

The South Dakota Humanities Council has directed $582,000 from the American Rescue Plan Act of 2021 through the National Endowment for the Hum…

Neil Young told Spotify to remove his music from the service, accusing it of providing Joe Rogan with a platform to spread COVID vaccine misinformation.

20 of the best movies set in winter weather

Ralphie, hero of the 1983 movie “A Christmas Story,”  is set to return to the screen as an adult in a sequel, with Peter Billingsley back as Ralphie.

WASHINGTON (AP) — President Joe Biden responded to a question about inflation by calling a Fox News reporter a vulgarity.

Here's a look at the top-rated true crime documentaries, according to Metacritic and IMDb ratings.

10 essential documentaries on the opioid crisis

To shed light on this manufactured drug epidemic, here's a brief look at 10 documentary films and docuseries that explore the opioid epidemic.

WATCH NOW: Bruce Miller sits down to talk with Oscar nominee Diane Warren about her success

Justin Timberlake 'will be in Janet Jackson documenty'

Justin Timberlake 'will be in Janet Jackson documenty'

Visitors to Gallery Six13 examine some of Rodney Bode's larger art. About 30 pieces of Bode’s work have sold since his exhibit opened, and news of his work is starting to attract attention from collectors, gallery co-owner Greg Geiger said.

Rodney Bode's work falls into the category of outsider art. Like Bode, outsider artists typically are self-taught, tend to be loners who are reclusive, and typically struggle with mental illnesses, according to Gallery Six13 co-owner Greg Geiger.

A collection of Rodney Bode's smaller paintings are seen on display at Gallery Six13 in downtown Rapid City.

A series of portraits are part of Rodney Bode's eclectic body of artwork.