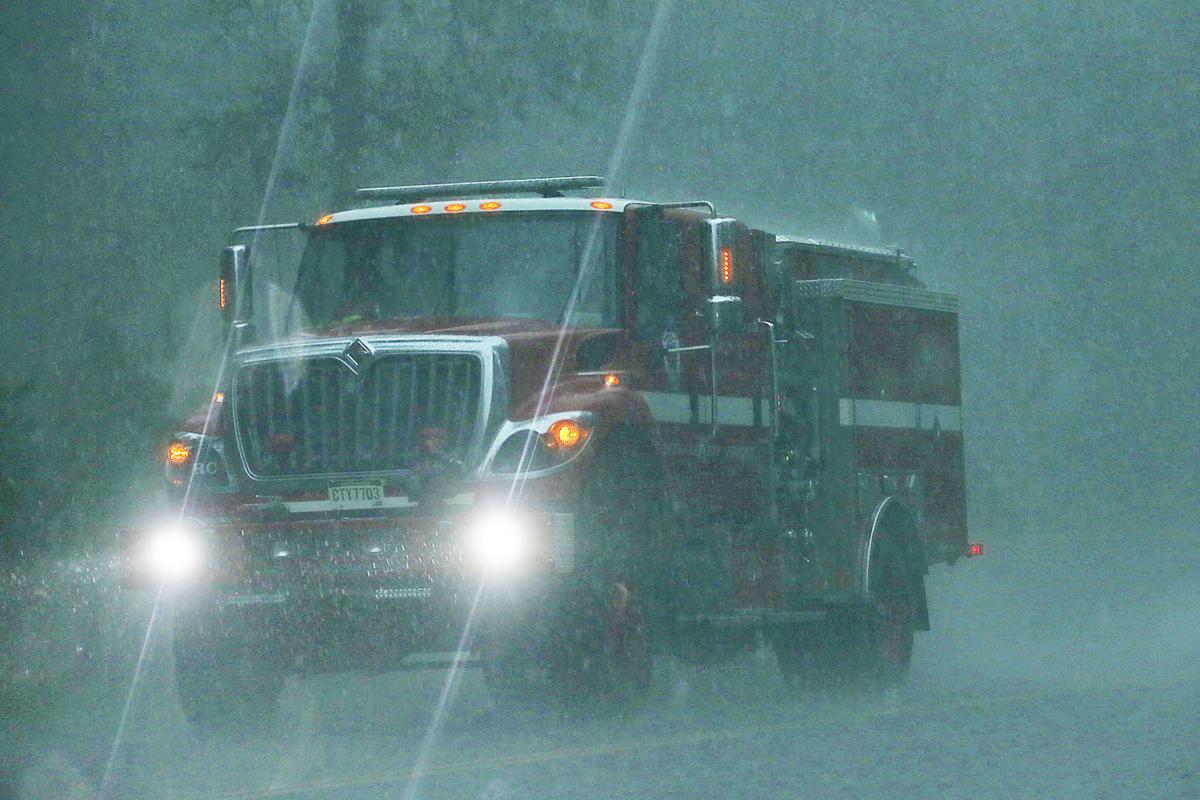 One of the trucks battling the Mine Draw Fire in Custer State Park travels along South Dakota Highway 16A in a heavy rainstorm on its way to the Hidden Valley Fire Station on Thursday. 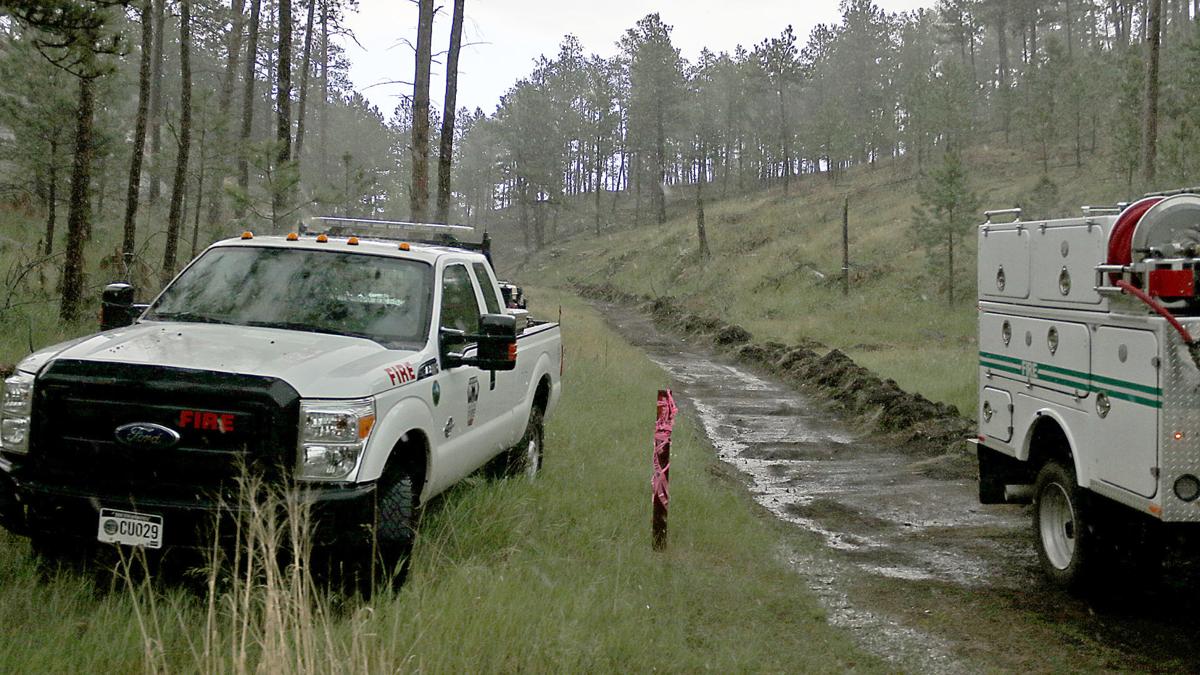 Two firefighting trucks sit just off South Dakota Highway 16A at the entrance to a fire road leading to the Mine Draw Fire on Thursday. The fire was 100% contained following a severe storm.

The Mine Draw Fire near Mount Rushmore was put to bed after a little over 24 hours thanks to the efforts of 117 firefighters and perhaps Mother Nature.

Following heavy rain and hail that drenched parts of the southern Black Hills from about 1 p.m. to 2 p.m. Thursday, Ian Fury, communications director for Gov. Kristi Noem’s office, released a statement saying the 60-acre fire was 100% contained as of 2 p.m.

The fire was about seven miles from Mount Rushmore where President Donald Trump is slated to visit July 3 for a fireworks display.

According to the release, there were three aerial resources on Thursday, two Type 1 helicopters and one air attack plane, with other air resources available to help.

While the fire moved through the park Wednesday, there were eight aerial aircraft assisting in the fight. The state also had assistance from the Wyoming and Colorado Roosevelt hotshot crews.

According to the release, the fire started at about 11:15 a.m. Wednesday and the cause is still under investigation.

Custer State Park released a statement on Twitter and its Facebook page at 2 p.m. Wednesday stating the fire was heading northwest from the park shop near Highway 16A, although no park structures or public areas were being threatened at the time.

According to tweets from the Rocky Mountain Area Coordination center, five engines responded to the fire along with a large air tanker, AA, two helicopters, two SEATS, one hotshot crew, a T-2IA crew and other personnel.

RMACC also reported the fire was at 150 acres around 4:30 p.m. Wednesday, which Fury confirmed in an email to the Journal late Wednesday evening.

Meteorologist Jeff Johnson with the Rapid City National Weather Center said the last updated number for rainfall in Custer was about .62 inches, as of Thursday afternoon, although unofficial numbers quoted 1.2 to 2 inches of rain. The area also received quite a bit of hail ranging in size from peas to golf balls, although most of it was small, Johnson said.

Johnson told the Journal on Thursday morning that the Black Hills is in a moderate drought due to less-than-average rainfall from March through June.

“Everybody (in this region is) running multiple-inch deficits and that related to dryer fuels out there,” he said.

Johnson said the area has an average eight years each of dry and wet periods, and the Black Hills has been in a wet pattern since about 2007.

“Through history we go through patterns of dry and wet, and research shows we’re heading into a longer stretch of dry weather,” he said. “It’s not a guarantee we won’t turn wet, but research shows once we start a dry period, we usually stay dry.”

Both Wednesday and Thursday were classified as moderate chances for wildfire, according to the South Dakota Wildland Fire website.

Moderate fire danger means fire can start from accidental causes with the exception of lightning fires.

Johnson said this weekend looks to be relatively dry and hot with indications of a little precipitation in the middle of next week. He also said next weekend looks to be above average temperature, although predictions further than a week out are more difficult to forecast.

Multiple crews are battling a 200-acre wildfire Wednesday on the Pine Ridge Reservation.

One of the trucks battling the Mine Draw Fire in Custer State Park travels along South Dakota Highway 16A in a heavy rainstorm on its way to the Hidden Valley Fire Station on Thursday.

Two firefighting trucks sit just off South Dakota Highway 16A at the entrance to a fire road leading to the Mine Draw Fire on Thursday. The fire was 100% contained following a severe storm.