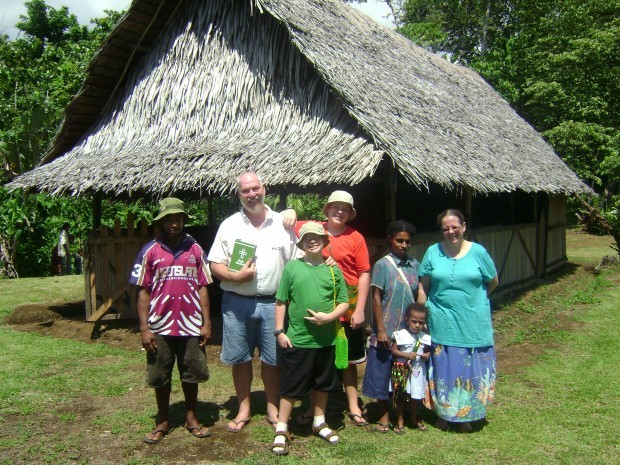 Hot Springs missionaries Ken and Miriam Martin, with sons Sam and Jesse, pose with their host family outside of the church they attended duriing a week-long visit to the host familiy's village. 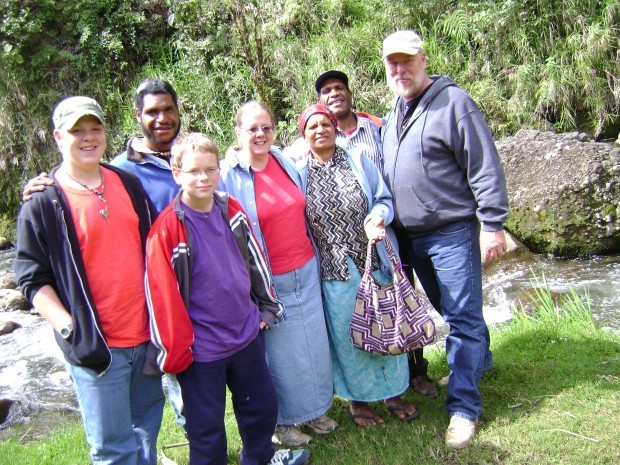 After 27 years of correspondence by mail and telephone, the Martin family got to meet and spend time with Pastor John Poning, his wife Wani and his brother, Bras Buna, from a remote village in Papua New Guinea during a year-long mission to the South Pacific Ocean island.

HOT SPRINGS - The mission trip that Ken and Miriam Martin - along with sons Sam, 16, and Jesse 12, embarked on was not the standard mission trip.

Theirs had seeds that were planted nearly 30 years ago.

In December of 2010, the Martins left their Hot Springs home, headed to the island nation of Papua New Guinea - PNG for short - more than 6,500 miles away, knowing that a friendship cultivated via letters and phone calls for 27 years was waiting on the other end.

The Martins will make an informative presentation on their year-long mission to the island beginning at 6 p.m. this Sunday, Jan. 22, at the Southern Hills Evangelical Free Church in Hot Springs. Included in the presentation will be a slide show of pictures from their mission, as well as artifacts they had previously owned, along with things they brought back with them. Among the many spectacular, colorful items is a hand-carved alligator.

"We served as volunteers with Wycliffe Associates," Ken explained. "It is a branch of the Wycliffe Bible Translators, supporting Bible Translation in PNG." Papua New Guinea is a unique nation, in that its approximately 7 million residents speak a total of more than 800 different languages. Ken Martin said about 500 of those languages have a biblical translation.

"We worked - Miriam as the office coordinator and I as the property manager - for the Ukarumpa Training Center," Ken said. "Each day we worked closely with PNG nationals at the training center, which is the largest Bible translation center in the world."

More than 1,000 people - from all over the world - live and work in the Center. "They call it ‘Little America,'" Ken said. "Many of the people there are missionaries as we were, or are American ex-patriots who have moved to PNG."

Natives from outlying villages come to the center for training and on occasion people will travel from the center to the villages. The goal is to provide the tools needed to do Bible translations into the native language in an area.

Ken said that one of the sessions in which he was involved 13 different languages in one training. "English is the language of education, Pidgin is the trade language and Hiri Motu is the government language." Martin described Pidgin as a mixture of numerous languages, including English and German.

"Most of the population is fluent in reading and writing English," he said, "but few speak it, because few people understand." A letter from long-time friend Pastor John Poning showed a rich dialect of vowels.

It was through Poning that the Martins wound up in PNG, but the ball really started folling in Pine Ridge many years ago.

"We, Miriam and I, were doing missionary work in Pine Ridge and heard a presentation seeking assistance to build a tribal school in PNG," Ken said "We ended up sponsoring a boy named Bras Buna, from a remote village in the western mountains." Bras Buna is John Poning's brother.

"So we made the trip to meet the people we had been communicating with for 27 years," Ken said with a grin.

Leaving South Dakota in December is one thing, but landing on an island that sits near the equator was a bit of a change. Ken said that the average temperature fluctuates between 60 and 80 degrees and that humidity is high on the coast, but is much more tolerable at higher elevations, such as in the mountains where the training center is located.

"It rains every day," Ken said, "and they measure their rainfall in meters. Annual rainfall in PNG is up to four meters (about 160 inches) per year."

He said that the Southern Hills Evangelical-Free Church supported the family in their mission, along with family and friends and another church.

"We did a short presentation at the church already," Ken said. "Doing this is our way of saying ‘thank you' to everyone who made the mission trip possible."

The presentation begins at 6 p.m., but Martin said he will stay as long as people want to answer questions.

Hot Springs missionaries Ken and Miriam Martin, with sons Sam and Jesse, pose with their host family outside of the church they attended duriing a week-long visit to the host familiy's village.

After 27 years of correspondence by mail and telephone, the Martin family got to meet and spend time with Pastor John Poning, his wife Wani and his brother, Bras Buna, from a remote village in Papua New Guinea during a year-long mission to the South Pacific Ocean island.