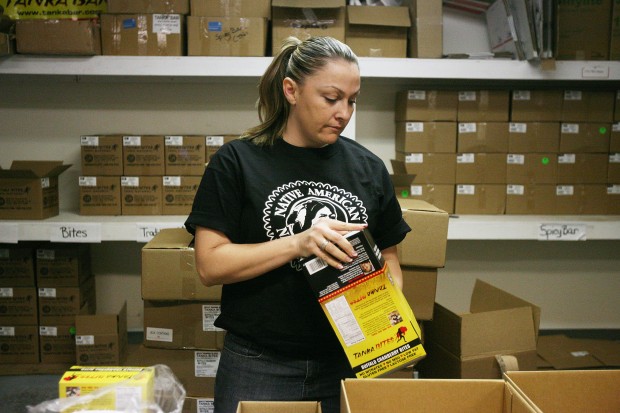 Kelly Hunter prepares a package for shipping at the Tanka Bar headquarters in Kyle on Monday, March 21, 2011. Tanka Bar ships small orders from Kyle to all 50 states. Hunter ships about 30 packages per day. (Aaron Rosenblatt/Journal staff) 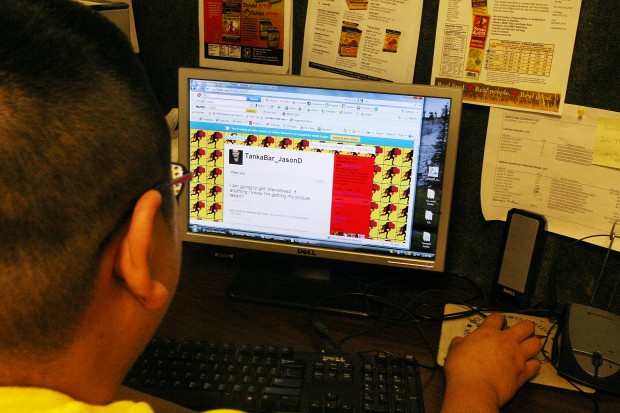 Jason Stover, marketing specialist, checks his Twitter feed at the Tanka Bar headquarters in Kyle on Monday, March 21, 2011. Tanka Bar has grown with the help of social media, and has a presence on YouTube, Twitter, Mypace and Facebook. (Aaron Rosenblatt/Journal staff) 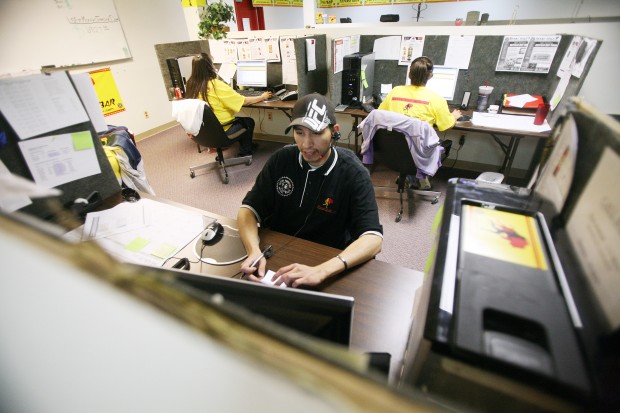 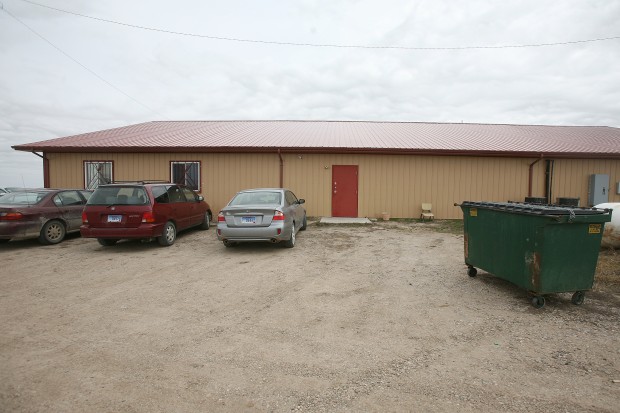 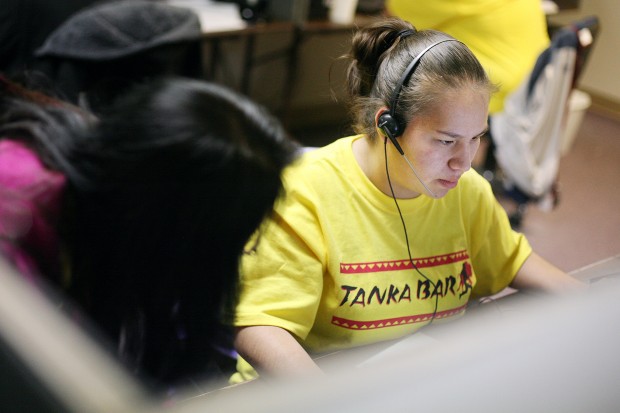 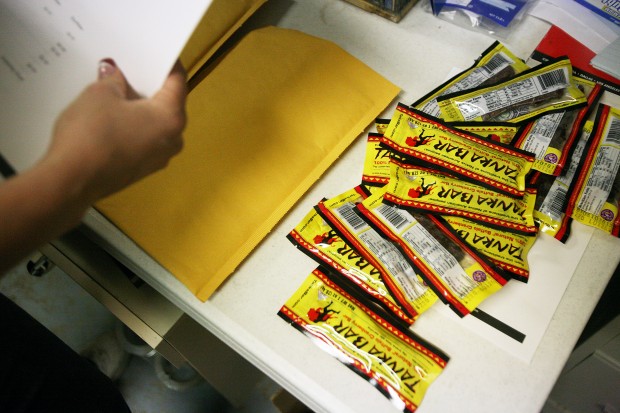 Mark Tilsen and Karlene Hunter are at the point when some entrepreneurs would start thinking about their exit strategy — how to sell their business, pocket the profits and move on.

But while the Tanka Bar buffalo snack they launched three years ago is now sold in 4,000 locations in 50 states — with help from national distribution and sales management partners — Tilsen and Hunter say there is much more work to be done.

They announced this month another in the string of growth initiatives they’ve celebrated since launching the homegrown Tanka Bar in October 2007 at the Black Hills Pow Wow. They’ve partnered with IGNITE Sales Management and Consulting, a company specializing in natural foods that will manage the product’s business development and sales processes.

That will mean Tilsen, the company’s president, won’t have to put so many miles on his truck traveling the country to meet vendors and promote the Tanka Bar line at college campuses and food stores.

Now he and Hunter, the chief executive officer, can focus on what they see as the larger mission of their

The company has to meet what the Federal Reserve Bank called a “double bottom line” in a 2009 profile of Native American Natural Foods and other “social enterprises,” those businesses that try to profit while also making the world a better place.

For Tilsen and Hunter, that means economic development on the reservations. The two are Pine Ridge Indian Reservation residents and longtime business partners. Together they founded the Lakota Express direct marketing firm years ago and both also have been board members at the Pine Ridge Area Chamber of Commerce.

They want to fight poverty and unemployment among Native Americans in a number of ways: first, through hiring and job training. They now employ 18 people at their Kyle headquarters, some of whom had

never worked before and who might otherwise have not seen a way out of poverty. Five others work for the company in other locations, and the actual processing is done at plants the company contracts with.

Tilsen said he expects excellence from his employees. Too often, he said, people expect that a Native

company will somehow provide service that is “less than.”

“We pride ourselves in being a little ‘more than,’” he said. With the skills the employees have developed, “They could walk out of Kyle, South Dakota, and get a job anywhere.”

They also want to buy from Native Americans where possible. They say today they get 20 percent of their bison from Native producers and hope to increase that further.

Another part of their mission is helping to fight obesity and diabetes that disproportionately plague Native people. People aren’t going to eat low-fat buffalo just because their grandmothers tell them to. It has to taste good and be branded as something cool to do, they said.

“We need to learn how to snack better, and that means better products and better-tasting products,” Hunter said.

Now that the Tanka Bar is a national brand, with the marketing, sales and distribution system in place to support it, the company can develop new products and help other Native entrepreneurs bring products from remote reservations to a national market. That might appeal to people who have a good product, but not the business expertise or connections to bring it to its sales potential, they said.

Hunter said people ask her why they don’t move their business from Kyle to a metropolitan area, or use fillers in the Tanka bars.

“As long as we stay true to our goals, then the fear comes down,” she said. “We know we’re doing what we’re supposed to be doing.”

Karlene Hunter and Mark Tilsen found Native American Natural Foods and work to develop its first product, the Tanka Bar energy snack made from dried buffalo, cranberries and spices. Funding includes their own investment, plus a $99,000 economic development grant from the U.S. Department of Agriculture and a $76,000 value-added agriculture loan from the Governor’s Office of Economic Development.

Buffalo rancher and consultant Duane Lammers works with researchers at South Dakota State University to produce the bar, made at Frohling Meats in Hecla.

The company debuts the Tanka Bar at the Black Hills Pow Wow. Volunteers in “Tanka Teams” hand out fake tattoos that work as a coupon for a sample of Tanka Bites at the Rushmore Plaza Civic Center. They also promote the bars at the National Indian Health Board meeting in Portland, Ore.

A news article about the debut is picked up nationwide, and the company scrambles to supply enough Tanka Bars to meet surging demand. They contract with an Idaho food processor to add capacity on top of what’s produced in Hecla.

The Tanka Bar debuts nationally at the Natural Products Expo West in California to more than 52,000 natural foods industry brokers, distributors and retailers. Reaction is “overwhelming,” according to Tilsen, adding,

“The difference between today and last October is that now, we’re ready.”

Native American Natural Foods announces its third product, Tanka Wild, a summer sausage made of buffalo, cranberry and wild rice. It joins Tanka Bars and Tanka Bites. Higher food prices are a challenge to the company’s growth, according to Tilsen.

Tanka Bars are featured on “Live with Regis & Kelly.” Hosts Regis Philbin and Kelly Ripa sample the bars on TV.

Tanka Bars are available both to delegates at the Republican National Convention in St. Paul, Minn., and to music fans at Farm Aid in Boston.

Tanka Bar is named an Editor’s Choice product by The Gourmet Retailer, a national magazine focused on gourmet and specialty foods. The magazine calls them the “perfect portable snack.”

Working with Natural Specialty Sales, the company signs contracts with natural foods distributors UNFI, Tree of Life, KeHE and Nature’s Best, as well as Sysco. Tanka Bar products are for sale in 49 states.

Tilsen: “It took us a long time to figure out how to access the food distribution industry. Now we finally have the relationships in place to move our brand to the next level in terms of sales and exposure.”

New distribution relationships are anticipated to add about 200 percent in sales growth for the company in 2010.

Native American Natural Foods is featured in a film series shown onboard the 24 airlines that are members of Star Alliance, including United Airlines and U.S. Airways. The series focused on “unexpected and burgeoning new businesses.”

Tanka Bar Spicy Pepper Blend earns the 2010 Backpacker magazine Editors’ Choice Award, given to products in recognition of innovation in design, materials and/or performance. The award, given at the Outdoor Retailer Winter Market in Salt Lake City, introduces the product to an expanded audience of outdoor adventurers.

Native American Natural Foods partners with IGNITE Sales Management and Consulting, turning over responsibilities for business development and sales processes to the expert group. IGNITE will handle the brand’s move into Whole Foods Market. The move means Tilsen won’t have to travel constantly and will be free to develop new products.

How coffee grounds can help you out around the house

How coffee grounds can help you out around the house

Why everyone should try yoga at least once

Why everyone should try yoga at least once

It’s unclear whether “red flag” laws — which allow the seizure of guns from a person deemed dangerous — help prevent mass shootings or should have been applied to the suspects in recent shootings in Boulder, Colorado, and Indianapolis.

The auto industry is undergoing a fundamental shift in technology to battery-powered electric vehicles. Here are 13 EVs coming in the next few years.

Who's your TV mom?

With Mother's Day closing in, we wondered which TV mom most closely resembles your own. Take our quiz, and think about how your mom reacts, or would have reacted, to certain situations.

As dog Major has returned to the White House after two biting incidents, first lady Jill Biden confirmed that the family will be adding a cat.

This vegan, gluten-free dessert bar recipe is a favorite of patrons at Maxie B’s bakery in Greensboro, North Carolina.

It’s easy enough that kids could help dad or a teenage sibling to make it.

Recipe of the Day: Fish Tacos With Apple Slaw

There aren't enough good things to be said about tacos — they're delicious, easy to make and completely customizable based on your flavor preferences.

When to stop drinking caffeine for a good night's sleep

Coffee, tea or sleep? Here's when to wisely consume caffeine, what qualifies as too much and what to know about why it affects each of us differently.

The cities where people are buying RVs

Unlike other segments of the travel and tourism economy, the market for recreational vehicles has been thriving in the face of COVID-19.

It’s always OK to fall back on the classics like flowers or a sweet treat, but if you want to give her a special gift that she will actually use, here are a few standout ideas.

Kelly Hunter prepares a package for shipping at the Tanka Bar headquarters in Kyle on Monday, March 21, 2011. Tanka Bar ships small orders from Kyle to all 50 states. Hunter ships about 30 packages per day. (Aaron Rosenblatt/Journal staff)

Jason Stover, marketing specialist, checks his Twitter feed at the Tanka Bar headquarters in Kyle on Monday, March 21, 2011. Tanka Bar has grown with the help of social media, and has a presence on YouTube, Twitter, Mypace and Facebook. (Aaron Rosenblatt/Journal staff)