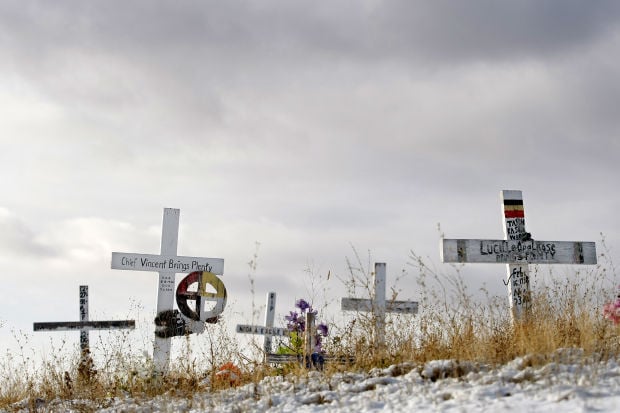 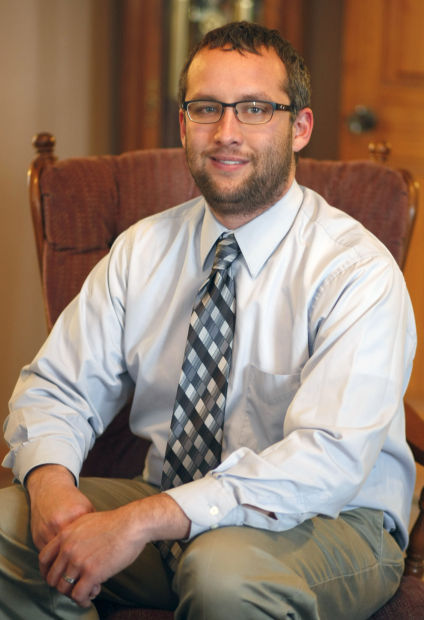 Michael Selzler, funeral director at Sioux Funeral Home, is the director at the only funeral home in Pine Ridge. 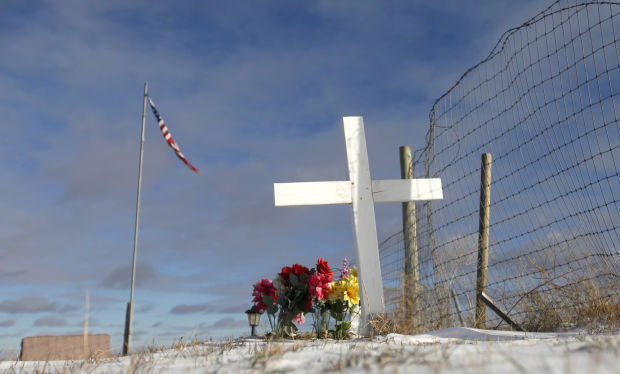 The American flag flies on the eastern edge of the Holy Cross cemetery in Pine Ridge. 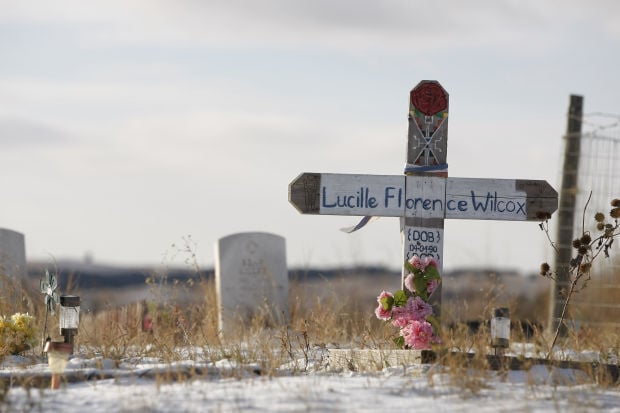 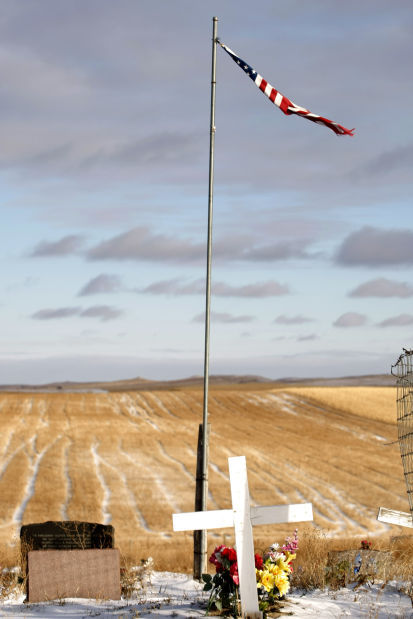 The American flag flies on the eastern edge of the Holy Cross cemetery Wednesday afternoon in Pine Ridge. Lakota burial rites include old and new traditions.

Death comes too soon for too many on the Pine Ridge Indian Reservation.

“We have a lot of deaths here — suicide, bad health, car wrecks,” said Pat Janis, whose phone regularly rings with calls about families who’ve just lost a loved one.

Janis oversees the Oglala Sioux Tribe’s Burial Assistance Program. As director, he determines who qualifies for a tribal burial and how much of the bill will be covered.

“I’m the burial director, but I’m also a spiritual leader,” he said.

Burial customs have changed since Native Americans were brought to the reservation.

“After we got on the reservation, a lot of that stuff started going away,” Janis said.

In the past, he said, bodies weren’t embalmed. The deceased were placed on a scaffold, along with their possessions. Food was set out for them “as if they were still alive,” he added.

Grieving family and friends observed a four-day wake, a time frame that may seem tedious, but it was time well spent, Janis said.

“If there was any conflict, like we all have with loved ones, there was time to resolve it so they could move on,” he said.

“I want to say 99 percent are both Christian and traditional,” said Michael Selzler, director of Pine Ridge’s lone funeral home.

Sioux Funeral Home is one of the oldest privately owned businesses on the reservation and one of the busiest.

Selzler may be looking at half a dozen pending services during any given week. It’s sobering to see such loss week in and week out, but Selzler said he sees purpose in what he’s doing.

“We are just doing our part in helping people,” he said. “That’s how I get through it.”

The Rev. Craig West moved to the southwestern South Dakota town of Martin nearly eight years ago. The Episcopal priest, along with two other ordained Lakota women, minister to the residents of Pine Ridge.

By far, he devotes the majority of his ministry to the deceased and their families.

“I spend 70 percent of my time burying people,” he said.

More sobering, he said, is knowing so few of the faces whose funerals he’s officiated.

“I’ve been here almost eight years, and I can count on both hands the number of people I knew before they died,” West said.

When West receives a call to officiate a funeral, it’s typically a three-day commitment. Wakes among the Lakota people are no longer four-day engagements, but they do run longer than modern-day visitations or viewings.

Families tend to hold a one- or two-night wake, although recent trends are toward a 24-hour period of remembering the deceased, Selzler said.

“We are starting to get to one night just because it’s harder on the family,” he said.

The bereaved are expected to feed anyone who comes to call, and often it’s a steady stream of people paying their respects.

Feeding so many people can get expensive, so some families choose to limit the wake to one night.

Immediate family members, such as a spouse, sibling or child, remain by their loved one’s side throughout a wake.

“Traditionally, there’s always at least one family member there,” Richard Two Dogs of Porcupine said. ‘It goes back generations, that it’s disrespectful to leave them alone.”

Wakes typically occur in large public spaces on the reservation. Meeting halls and school gymnasiums are common indoor sites, but not all wakes occur within four walls.

Two Dogs, a medicine man, recalls a summertime wake or two in which the body was placed in a teepee.

Wake and funeral ceremonies tend to be held in the same location. Once a body arrives, it doesn’t move until it’s taken to its final resting place.

“The body will lie there until the burial,” West said.

As soon as West or any other Christian minister concludes his or her portion of the funeral service, the traditional conclusion to the ceremony begins. A medicine man offers prayers, and Lakota songs are sung, often to the beat of a drum group.

“We make prayers for the deceased and for the surviving relatives to have strength to endure,” Two Dogs said.

Toward the end of the traditional rites, guests are invited to view the body one last time. One by one, those in attendance pass by the casket, paying their respects to the deceased and offering their condolences to those left behind.

“When the last person goes through, the food and the gifts are put in … right before we close the casket,” Two Dogs said.

“We believe the spirit will journey for four days after they are put into the ground,” Two Dogs said.

Gifts placed in the casket are equally ideal for the journey ahead. Practical presents for men include a knife; women may receive a shawl or scarf.

“It’s just another beginning for another journey,” he said. “We look at it as a spiritual journey.”

The traditional Native American funeral takes more time than its modern-day counterpart, but it engages people in ways that more contemporary ceremonies might not.

For one, he added, there’s more family interaction.

“I used to work in a city where funerals started at 10 a.m., and we were done by 11 a.m., and it was just a hurry, hurry thing. Everything needed to run on time.

“With this, things … are done when everybody has done their part.”

Prayer apps are flooding the market, but how well do they work?

A scholar of Christian spirituality argues that prayers are meant to bring together a faith community — something apps aren’t likely to achieve.

Michael Selzler, funeral director at Sioux Funeral Home, is the director at the only funeral home in Pine Ridge.

The American flag flies on the eastern edge of the Holy Cross cemetery in Pine Ridge.

The American flag flies on the eastern edge of the Holy Cross cemetery Wednesday afternoon in Pine Ridge. Lakota burial rites include old and new traditions.