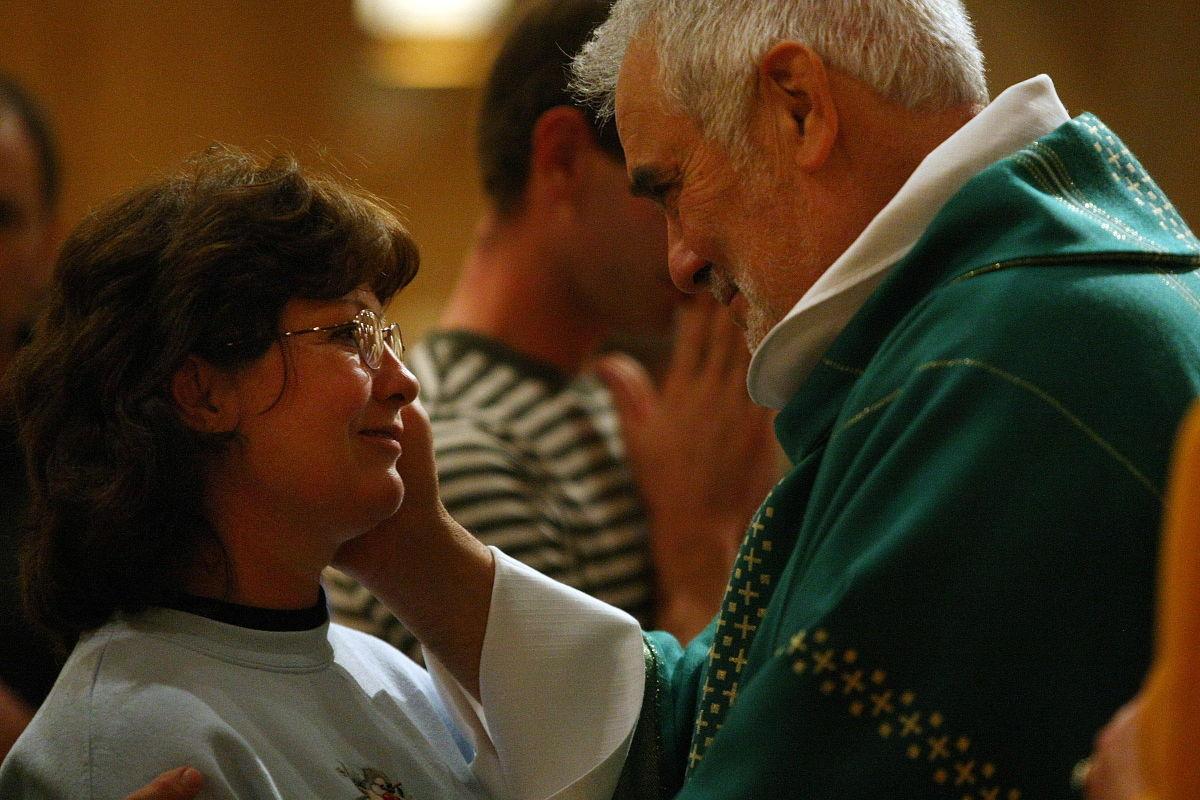 The Rev. Richard McAlear will holds healing retreats around the world, and will be visiting Rapid City from Sept. 11-12. 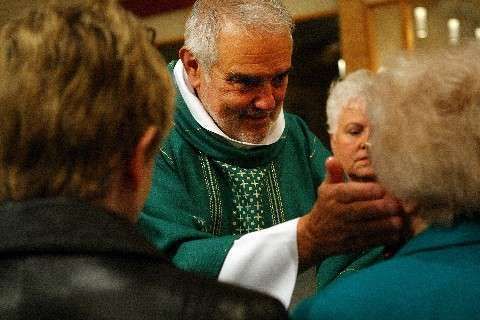 The Rev. Richard McAlear touches a parishioner’s face as he prays for her during a healing retreat at Blessed Sacrament Church in Rapid City in 2009.

“People have said they see Jesus’s eyes in his eyes,” Halina Hladysz says of the Rev. Richard McAlear.

Her family is one of thousands who have witnessed “Father Mac’s” healing power by watching loved ones made whole again after attending one of his prayer masses or healing retreats.

McAlear is holding a healing retreat titled “Come to Me All Who Are Weary” from Sept. 11 to 12 at the Cathedral of Perpetual Help on Cathedral Drive. McAlear has previously offered messages of hope in Rapid City in 2006, 2009 and 2011.

So far this year, he has traveled to Australia and held retreats in at least a dozen states and Sao Paolo, Brazil. There is no charge for the Rapid City retreat, and it is open to all faiths and people from all walks of life.

Originally from the Boston area, McAlear says on his website that he experienced his first healing miracle when he prayed for a dying woman who recovered. “I have a ringside seat to something going on. I know something is going on. Something is happening,” he said.

Hladysz and her late husband came to the U.S. from Poland about 30 years ago. For 16 years, she wrote a column for the Journal on health and healing. Several years ago, Hladysz learned that McAlear was going to hold a retreat in Yankton and she attended, carrying a letter in her hand she hoped to present as a healing prayer request for another person.

During a break, Hladysz handed McAlear letter as he mingled. “I found him very sweet ,” she said. “I was shy, and he was kind and fatherly to me.”

A few weeks later, the Hladysz family received a postcard from McAlear, telling them that he had the photo she had given him on his desk and was saying prayers for healing. “He goes all over the world. I didn’t think he would personally acknowledge us," Hladysz said.

Hladysz said that while she cannot compare him with Jesus, McAlear's lifework is very similar as he goes out among the people, offering prayers and words of encouragement to help them deal with personal burdens. Numerous testimonials are posted online from those who have seen positive changes and healing. Many are from cancer sufferers who claim they have been cured.

Before leaving for Rome recently, the Rev. Michael Mulloy, rector of Our Lady of Perpetual Help, said "healing is something desperately needed in our world today. We have marvelous abilities to heal physically, but the healing of spirit and soul requires more than our human ingenuity. Father McAlear has been gifted with being a channel of God’s mercy and love.

"Through his talks, the sacrament of reconciliation, the celebration of the mass and the healing service itself, God will bless us with his presence. I am excited to have Father McAlear come to the Cathedral. It will be a restful and peaceful time of prayer and fellowship. I hope the Cathedral will be filled with many people who will experience this wonderful opportunity.”

For more information or to register for the retreat, contact Beth Strain at 342-0507. An 18-part course on the Rev. Richard McAlear’s healing ministry is available free-of-charge online at frmac.org/listen-to-ministry-healing-course-for-free.

Historic brewery is making a case for reusable beer bottles

How to prevent obesity in senior dogs

How to prevent obesity in senior dogs

Has the world's best coffee bean been found?

Has the world's best coffee bean been found?

The Rev. Richard McAlear will holds healing retreats around the world, and will be visiting Rapid City from Sept. 11-12.

The Rev. Richard McAlear touches a parishioner’s face as he prays for her during a healing retreat at Blessed Sacrament Church in Rapid City in 2009.