Become a Member
Read Today's E-edition
Share This
Sensational steak, but the recipe's a secret
Share this
1 of 3 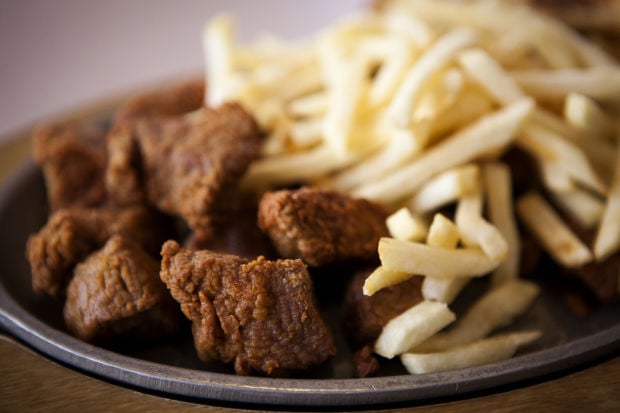 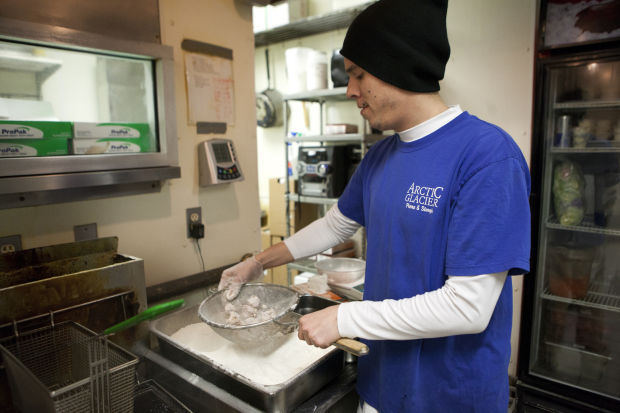 Justin Antuna, 34, coats a serving of steak tips in flour before deep frying them on last month at the Stadium Sports Grill in Belle Fourche. 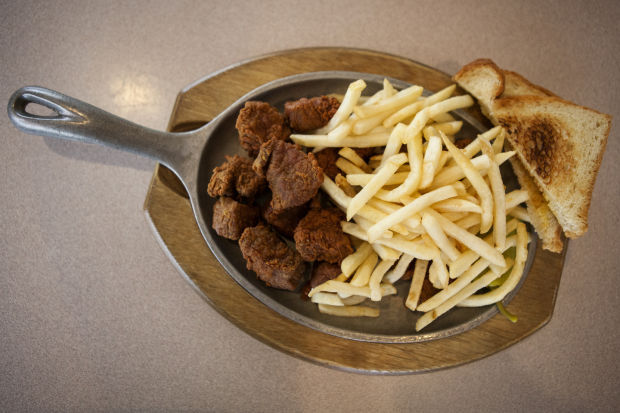 Jennifer Jungwirth Special to the Journal

Steak is king in South Dakota. And there is one local franchise that has perfected the art of preparing the popular dish.

The steak tips at Stadium Sports Grill, made with South Dakota beef, marinated in a top-secret sauce, breaded and deep-fried, are labeled legendary among its patrons.

Keanen Smart will attest to that. Three days a week Smart, of Fruitdale, spends his lunch break at the Stadium Sports Grill’s Belle Fourche location.

“I get the beef tips every time I come in here,” Smart said. “They are just so good.”

The Stadium Sports Grill, owned by John and Jo Heck and Clair Donovan, has three locations — Belle Fourche, Spearfish and Madison. The original location in Spearfish opened in 1993. The franchise expanded two years later, with the Belle Fourche location opening in 1995. In 2007, a third location was opened in Madison.

In addition to the beef tips, the Stadium Sports Grill menu offers more than 100 items including hand-patted burgers, sandwiches, salads and appetizers. Heck said the beef tips make up nearly one-third of the business, however. The tips come in many varieties, from a lunch portion to a macho portion, in quesadillas, on salads and in sandwiches.

“We get asked at least a few times a week to give out the recipe,” said Kris Kryza, general manager of the Belle Fourche location. “We must be doing something right. It’s by far the best recipe I’ve ever had.”

And that recipe is a well kept secret.

Aside from the Hecks and Donovan, the general managers are the only others who know the secret recipe. And they are sworn to secrecy.

“The often imitated, but never duplicated” steak tips have been in South Dakota since the 1970s, Heck said.

The recipe came from a good friend of John and Jo Heck. Her name was Marcel Butts and she owned the Rancher Bar and Grill in St. Onge in the ’70s and ‘80s.

“People came from all over to visit Marcel and dine on her famous Rancher Beef Tips,” Heck said.

In addition to a fantastic steak recipe, the Rancher Bar and Grill had a dance floor. The Hecks were part of a weekend music trio that performed regularly at the steakhouse.

The couple became good friends with Marcel over the years and on their 25th wedding anniversary, Marcel catered their party and let them in on the secret recipe.

“We are honored to have the chance to carry on the Rancher Beef Tip legend at the Stadium,” Heck said. “Who ever heard of deep frying steak?”

Marcel now lives in Montana, but her legendary steak tips live on at the Stadium Sports Grill.

Opening a restaurant wasn’t in Heck’s original plans. Heck and Donovan, who have been business partners since 1988 in various ventures, owned the building on the bustling corner of Jackson Boulevard and Main Street in Spearfish. The two had other plans for the building, but they fell through.

“Clair owned a Spearfish liquor license and he came to me (and) said, ‘Let’s just put a bar in there.’”

After a complete renovation of the building, the Stadium Sports Grill opened with beef tips on the menu.

“We have had the opportunity to meet a lot of good people – both customers and staff over the years,” Heck said. “This is what we enjoy most about the business. We would put our people and staff against any. They are just incredible.”

“It’s the friendliest outfit you’re going to come to,” Smart said. “When you walk through the door, they know you by name and ask, ‘How ya doing?’”

And after trying the Stadium Steak Tips, everyone will be doing just fine.

The Stadium Grill’s recipe is top-secret, but here’s a recipe from local chef Herb Lenerville, owner of the Golden Buffalo Café in Beulah, Wyo.

"Steak tips are wonderful," Lenerville said. "Especially when made with the best choice uptown cuts (tenderloin and sirloin are my favorites)."

Cut steak into bite-sized pieces. Mix all other ingredients well and marinate the tips overnight, or at least 4 to 6 hours. Roll in flour and deep-fat fry. Cook them about 2-1/2 to 3 minutes.

McDonald's is returning the Egg McMuffin to its original price

McDonald's Egg McMuffin is turning 50 years old, and it's giving the breakfast sandwich a price to match.

6 tips for carving a Thanksgiving turkey like a pro

Here's everything you need to know before slicing into that turkey on Thanksgiving Day.

Cheers-worthy gifts for those who like a good drink

We raise a glass to our seven top-shelf picks.

The soup has a delicious aroma and a sweet flavor from the carrots, onions and butternut squash. It’s a perfect cold-weather soup.

The kitchen can be chaotic place during the holidays, and knife mishaps can occur. Here's advice on how to avoid a kitchen knife injury.

From exciting spice blends to candles that deliver on ambiance, we bring you our top picks for gifting that friend who’s always whipping up new culinary creations.

Justin Antuna, 34, coats a serving of steak tips in flour before deep frying them on last month at the Stadium Sports Grill in Belle Fourche.