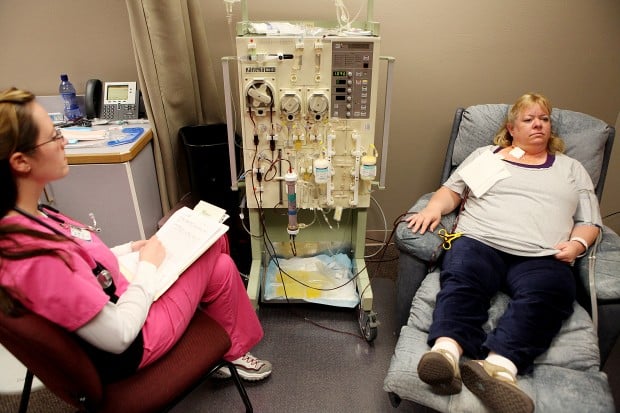 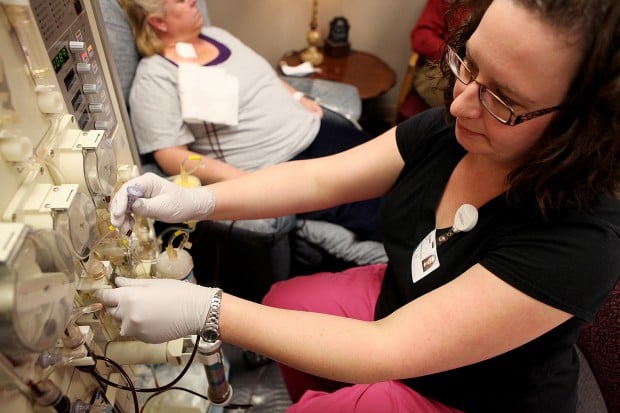 Angela Pfleger, RN, adjusts the level of fluid in the machine to maximize the amount of plasma being pulled from the blood. (Toby Brusseau/Journal staff) 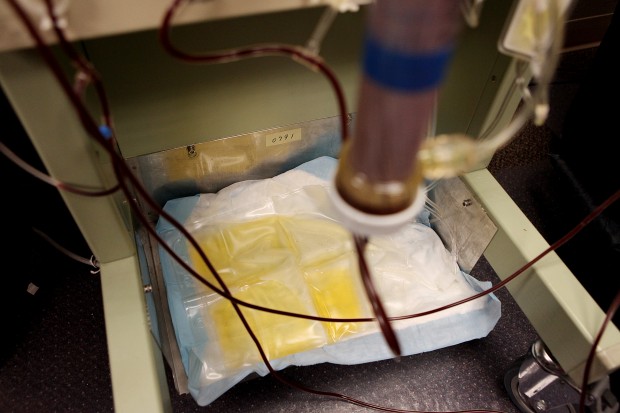 Yellow cholesterol that has been cleaned from Dillie's blood is filtered out into a bag at the bottom of the machine on Thursday morning, March 25th, 2010. (Toby Brusseau/Journal staff) 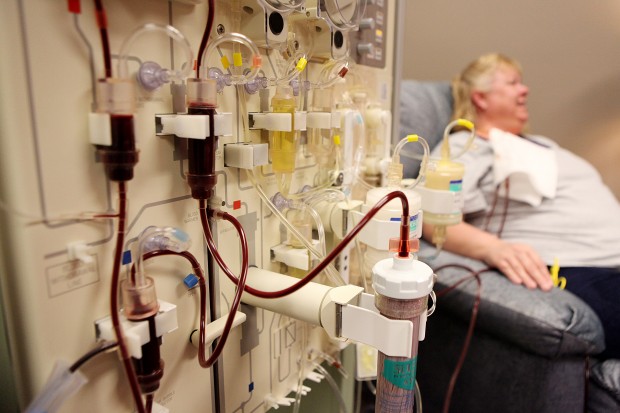 The Liposorber machine is an "extracorporeal" (blood taken outside the body) procedure to remove LDL cholesterol ("bad" cholesterol) from the blood. (Toby Brusseau/Journal staff) 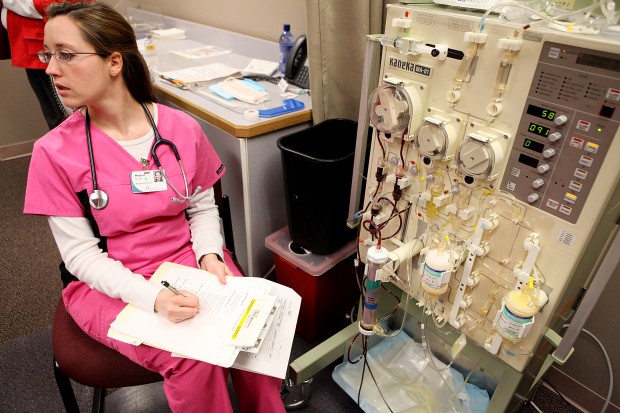 Every two weeks, Kay Dillie is drained of all her blood, one pint at a time.

She gets it back, of course, but with less cholesterol.

During a recent appointment at Regional Medical Center, Dillie reclined in a chair as tubing pulled her blood from her arm into a machine called the Liposorber. The machine, new to the center, removed her blood, strained out the bad cholesterol known as LDL and returned the blood to her body.

Near the bottom of the Liposorber, the liquid LDL from Dillie’s blood began to pool in a bag. When first removed, it looks like melted butter, but will turn to a Silly Putty consistency if exposed to the air.

Dillie, who lives in Gillette, Wyo., was the first person to be treated with the new Liposorber in Rapid City. The device is used to lower LDL cholesterol levels in people with extreme levels.

When there’s too much LDL in the blood, it builds up in the inner walls of the arteries and forms plaque. To avoid that, people should strive for a low number. The lower the number, the lower the risk of heart attack and stroke. The LDL is a better gauge of risk of heart attack and stroke than the total blood cholesterol, according to the AHA. Optimal LDL levels are 100 milligrams per deciliter.

Dillie had her first heart attack at age 35. After her attack, she learned her LDL cholesterol level was more than 400.

Doctors performed six bypasses on her heart. Then last year, after eight years of cholesterol-lowering medication, she had another heart attack.

Repas said Dillie’s liver does not have the receptors that would generally rid the body of built-up cholesterol.

Patients with such an abnormality face an early death from heart disease unless they can have the cholesterol removed. More people have the genetic disorder than previously thought, Repas said.

Dillie comes from a long line of people who have died early from heart-related diseases. Only after her own diagnosis did Dillie realize that they, too, probably had sky-high cholesterol levels.

“It’s not that rare actually,” Repas said. “One in 500 people have it. For a lot of people, the drugs won’t work. You cannot diet enough to lower your cholesterol if you have this.”

After Dillie’s first three- to four-hour Liposorber treatment in early March, her cholesterol levels dropped from 355 to 104. And she felt healthier.

“I feel better when I’m done,” she said. “The next day, I’m bouncing off the walls. I didn’t really know how much it did hurt until it was gone.”

Before the Liposorber, which has been on the market since 1986, doctors had little they could do for patients such as Dillie. Now, there are options. And it’s an option that excites Repas.

“It’s really awesome. It really is,” he said.

Over time, the cholesterol-removing process will even begin to remove hardened plaque in the arteries. The treatment also will keep the levels lower between treatments.

“There are still a lot of people who don’t even know it’s an option,” Repas said.

“It lessens your worry about whether you’re going to be alive tomorrow,” she said.

Cities that spend the most on residential construction

Here's how to stop being such a people pleaser

Here's how to stop being such a people pleaser

If you could be one age for the rest of your life, what would it be? A developmental psychologist explains how a period of life that's often hectic and stressful can also end up being quite rewarding.

Many Evangelicals say they won't be vaccinated against Covid-19. Some experts say distrust and misinformation have played a role

At Pastor Tony Spell's Sunday sermon this week, he preached a different kind of message than usual to his congregants: Don't trust Covid-19 vaccines.

Are those pesky allergies once again raining on your parade? Here’s a look at the best allergy medicines available today.

Prince Philip died at 99. Living to such a ripe old age isn't unusual for UK royals. Nor is it surprising, argues an expert on aging and longevity.

KHN’s ‘What the Health?’: Health Care as Infrastructure

President Joe Biden’s infrastructure proposal includes items not traditionally considered “infrastructure,” including a $400 billion expansion of home and community-based services for seniors and people with disabilities, and a $50 billion effort to replace water pipes lined with lead. Meanwhile, the politics of covid-19 are turning to how or whether Americans will need to prove they’ve been vaccinated. Joanne Kenen of Politico, Tami Luhby of CNN and Sarah Karlin-Smith of the Pink Sheet join KHN’s Julie Rovner to discuss these issues and more. Plus, Rovner interviews KFF’s Mollyann Brodie about the KFF COVID-19 Vaccine Monitor.

The US Centers for Disease Control and Prevention and the US Food and Drug Administration are recommending that the United States pause the use of Johnson & Johnson's Covid-19 vaccine over six reported US cases of a "rare and severe" type of blood clot.

Fauci says this is a pause and not a cancellation of the J&J vaccine. Here's how long a final decision may take

Dr. Anthony Fauci, the nation's top infectious disease expert, says the recommended pause on the Johnson & Johnson Covid-19 vaccine is just that: a pause -- and not a cancellation -- and will likely last days to weeks.

While COVID toes have been a widely discussed skin change in the pandemic, other rashes have been noted to occur in patients infected with COVID-19.

Here's what can help the US soon see a Covid-19 'turnaround,' Fauci says

US officials are racing to vaccinate as many Americans as possible to beat another Covid-19 surge -- and doses are being administered at a record pace.

Altered sense of smell common, even prior to COVID-19

Having an altered sense of smell is actually common. A survey of U.S. adults found two-thirds experienced a problem with smell sometime in their lives.

Why do some people feel different than others after getting the Covid vaccine?

Why do some people feel different than others after getting the Covid vaccine?

Be a more energetic morning person by following this method

Be a more energetic morning person by following this method

Angela Pfleger, RN, adjusts the level of fluid in the machine to maximize the amount of plasma being pulled from the blood. (Toby Brusseau/Journal staff)

Yellow cholesterol that has been cleaned from Dillie's blood is filtered out into a bag at the bottom of the machine on Thursday morning, March 25th, 2010. (Toby Brusseau/Journal staff)

The Liposorber machine is an "extracorporeal" (blood taken outside the body) procedure to remove LDL cholesterol ("bad" cholesterol) from the blood. (Toby Brusseau/Journal staff)