US beats Iran, advances to round of 16 at World Cup

The country’s medical debt crisis is at its most dire in several parts of Texas, which is home to three of the worst 10 U.S. counties for medical debt, according to data analyzed by the Urban Institute.

In each of those communities -- Haskell County, Pecos County and Nolan County -- the share of residents with outstanding delinquent medical bills is at least three times as high as the U.S. average.

In Haskell County, 43% of residents have medical debt that’s gone to collections, a rate that’s higher than almost anywhere else in the country. The Pecos and Nolan County rates are within a few percentage points, hovering around 40%.

Experts say medical debt is so pronounced in Texas because of the high number of uninsured people. More than 5 million Texans are uninsured, according to the U.S. Census Bureau, or about one in five Texans. That’s much higher than the overall U.S. uninsured rate of 8%.

“There is absolutely no doubt that the people with the highest risk of medical debt are the uninsured,” said Anne Dunkelberg, associate director with the public policy institute EveryTexan, who has studied medical debt in the state.

“Unfortunately, the safety net is through the hospital emergency department, and that drives costs up,” Floyd said.

But having insurance doesn’t protect people from incurring debt either.

“We have patients who come in who are surprised all the time that their plan doesn’t cover whatever it is that it’s not covering,” Floyd said. “Some people buy very high deductible commercial plans because they’re cheaper and then when they get in trouble medically, they realize … they don’t have the coverage they need.”

Other key drivers of medical debt include unfair billing and collection practices and complicated bureaucracy in dealing with providers and insurers, according to healthcare advocacy group Community Catalyst.

The family of Deborah Mais, a College Station resident who lives with a traumatic brain injury after a 2021 car wreck that left her with insurmountable debt, said more help needs to be available for Texans struggling with unforeseen medical bills.

“It's a little disconcerting that our country doesn't provide us with the resources to take care of people like her, with her needs,” said Mais’ mother and caretaker, Dolly Francis.

Mais’ healthcare providers have advocated that she still needs to be in an inpatient rehabilitation facility, but many of the facilities are cost-prohibitive, Francis said.

“She's troubled about finances, because she has no way to provide for herself, and so no way to have decent medical insurance that she can pay for herself, Francis said.

If she did, Francis said, “she could get the help that she needs.”

Part of the problem in Texas stems from the tight limits on the state’s Medicaid program. Texas’ Republican-controlled Legislature has failed to expand Medicaid in the more than a decade since the Affordable Care Act was passed.

An estimated 1.4 million additional uninsured Texans would qualify for care if the state did a Medicaid expansion, according to the Kaiser Family Foundation.

A bill that would have expanded Medicaid died in 2021 after failing to receive enough support, despite it having some Republican backers and a large coalition of support outside the statehouse.

But key Republicans, including Gov. Greg Abbott, have long been opposed to the policy. Abbott once called it the “expansion of an already broken and bloated Medicaid program.” The governor did not respond to a request for comment about his current stance on the policy or other ways to address medical debt among Texas residents.

And Texas House Speaker Dade Phelan, who in the past has advocated for increasing access to telehealth and helping children access healthcare, has stopped short of advocating for Medicaid expansion. Phelan did not respond to a request for comment about his current stance on the issue.

Largely, the failure to expand Medicaid in Texas is a political decision, Dunkelberg said, which disproportionately impacts Texans of color.

“The bottom line is the vast majority of Texas elected officials understand there’s enormous fiscal benefit for the state if we do Medicaid expansion,” she said. “It’s definitely a political, ideological thing.”

About 60% of uninsured Texans are Hispanic, according to Urban Institute data. And 21% of Texans of color have medical debt in collections, two percentage points higher than the state as a whole.

“It’s kind of like a poster child for what institutional racism looks like,” she said. “Regardless of whether anyone consciously decided they didn’t want to help (people of color), the fact is the outcome is disproportionately holding back Texans of color from being able to make economic progress in their lifetimes.”

Floyd, the medical association president, said the state has made some incremental progress with expanding access to health coverage, like expanding Medicaid coverage for postpartum moms in Texas from two months to six months.

“We’ve been successful in targeted approaches,” Floyd said. “As far as why Medicaid has not been expanded, I’d have to refer you to our legislators.”

Republican state Sen. Paul Bettencourt said he believed the reason why Medicaid hadn’t been expanded in Texas was that “the long-term belief was that Obamacare would be overturned.”

“This has been a decade (long) argument,” he said. “I’m sure the issue will come up in some manner in the next legislative session.”

Meanwhile, Bettencourt is behind a non-Medicaid related fix to curb healthcare costs, a legislative effort to require hospitals to provide itemized bills to patients before pursuing debt collection.

“What gets measured gets fixed,” Bettencourt said. “It’s a way for the public to have transparency about their medical bills. It’s just Texas common sense.”

Dunkelberg said the piecemeal approaches supported by Republicans have been frustrating to advocates who want to tackle the problem on a bigger scale.

“Many are not bad ideas at all, they’re just not sufficient to prevent medical debt or pull someone out of the grease if they’re uninsured and have a big hospital debt,” Dunkelberg said.

In the absence of Medicaid expansion, there is some help for uninsured Texans in need of services, but advocates said it doesn’t go far enough.

A county indigent healthcare law provides vaccines, medical screening, physical exams, labs and hospital care for people at or below 21% of the federal poverty rate. But that leaves many people out.

“It’s better than nothing and there are a handful of counties where it’s really meaningful,” Dunkelberg said. “You’ve got a fair amount going on in the Rio Grande valley. Waco has a pretty significant indigent care program. But it’s limited in scope.”

In addition, Texas’ nonprofit and public hospitals are required to provide charity care programs in order to maintain their not-for-profit, tax-exempt status. But the size of those programs vary, and private, for-profit hospitals don’t have the same requirement.

“Our health districts … have historically been so concerned about being overwhelmed with demand for their services, particularly free and sliding-scale services, that they’ve never put it all out there and made it real easy for people to understand,” Dunkelberg said.

However, Carrie Williams, spokeswoman for the Texas Hospital Association, said “there are requirements to disclose these policies to patients and it is to the hospital’s benefit to make sure patients understand them well.” That includes posting charity care notices in hospital waiting areas.

“Hospitals are front and center, providing life-saving treatment to people, regardless of their ability to pay,” Williams said.

But even charity care doesn’t necessarily protect patients from debt.

“A patient who is eligible for charity care can still end up with a bill, and possible debt,” Williams said. “For instance, if a hospital has a sliding scale charity care policy and a patient gets an 80% discount on their bill, the patient is only responsible for the remaining 20% of the bill. They can still end up in medical debt over the portion of the bill they were responsible for.”

Waco resident and activist Carmen Saenz has been a longtime patient of Waco Family Medicine, a federally qualified health center that serves low-income and uninsured patients.

She said it’s not uncommon to have to wait an hour or more on hold on the phone in order to access care for her chronic illness, which causes inflammation of her blood vessels.

“You literally need a graduate degree to navigate the healthcare system in the state of Texas,” Saenz said. “I have a lot of privilege(s). I can guarantee that a regular person down in East Waco with a high school education or for people who have limited English skills, accessing care is very difficult.”

At the very least, Texans should have access to health care liaisons who could help them navigate the complicated existing bureaucracy to help them access care, Mais’ family said.

Francis lost her job last year after having to take too many days off work to take Mais to appointments and deal with phone calls from insurance companies.

“That almost seems like it would be the most helpful thing … somebody whose sole job was just to help you kind of navigate the bureaucracy with the insurance companies, the bureaucracy with these facilities,” said Mais’ brother, Brian Thornton. “There just seems to be no sort of system wide coordination on this type of injury.”

A traumatic brain injury and $500k in medical debt: 'It feels unbearable sometimes'

A traumatic brain injury and $500k in medical debt: 'It feels unbearable sometimes'

Medical debt has become a nationwide crisis, with 13% of U.S. adults impacted by past-due medical bills, according to data collected by the Urban Institute, a Washington, D.C., public policy think tank.

'Gaslighting' Is Merriam-Webster's 2022 Word of the Year

'Gaslighting' Is Merriam-Webster's 2022 Word of the Year

Hate eating leftovers? You're not alone

Hate eating leftovers? You're not alone

What is 'junk sleep' and are you experiencing it?

What is 'junk sleep' and are you experiencing it? 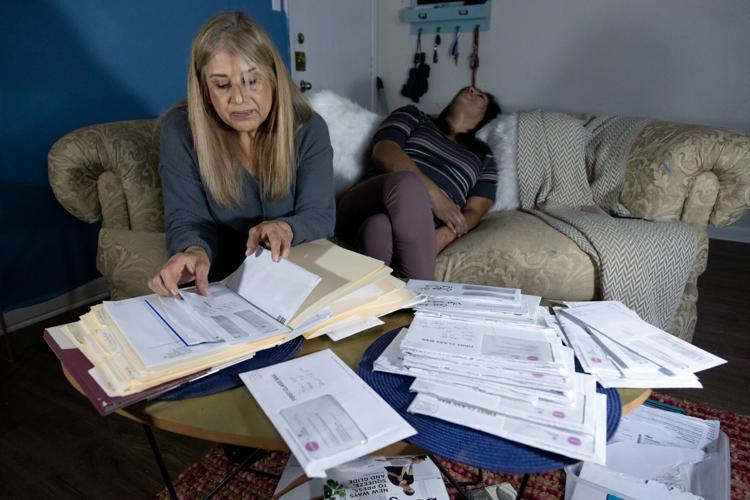 Deborah Mais lays on her mom's couch as Dolly Francis looks through her daughter's medical bills at Francis’ apartment on Oct. 26 in College Station, Texas. 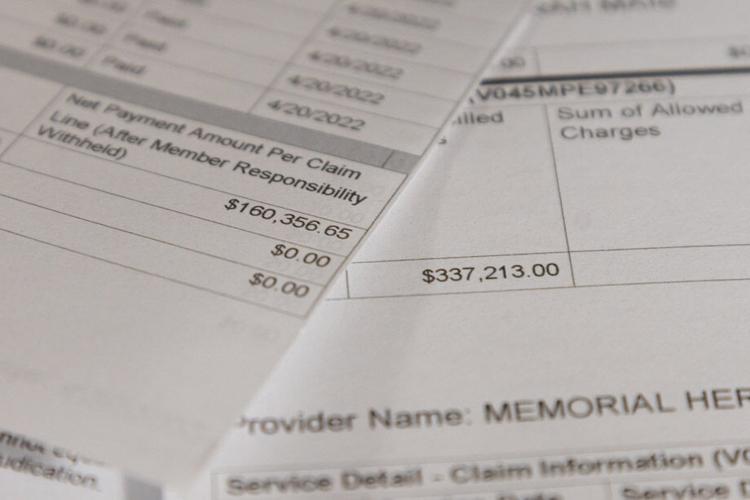 Medical bills for Deborah Mais sit on a living room table at her mom's apartment in College Station, Texas. The total for these two bills is $497,569.65. 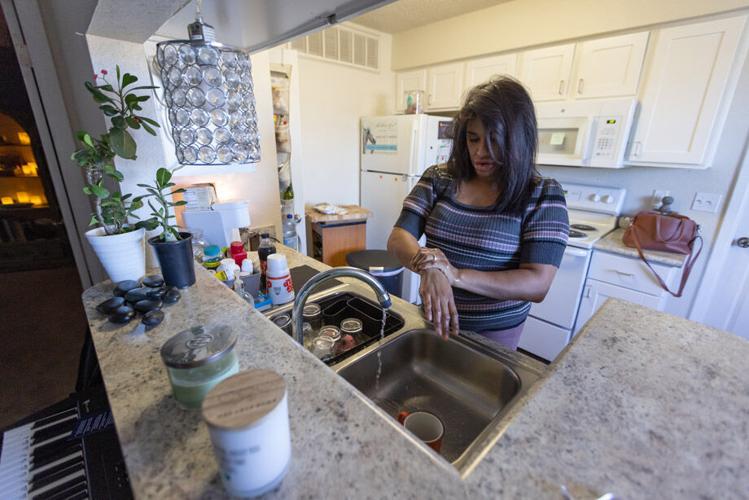 Deborah Mais works on doing the dishes at her mom's apartment on Oct. 26 in College Station, Texas.