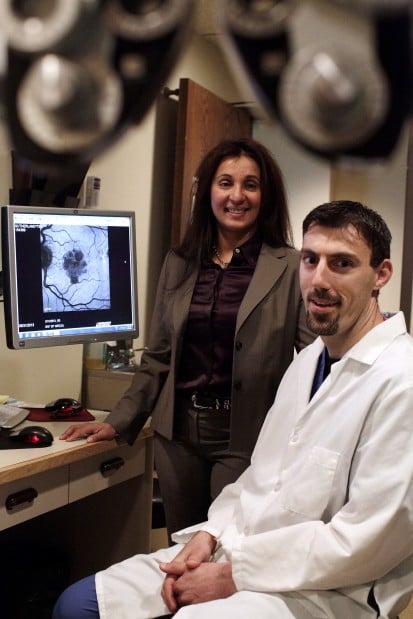 A miniature implantable telescope is about the size of a pea. 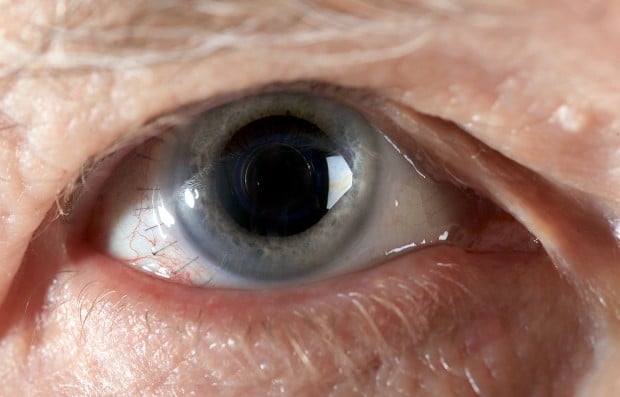 Lee McElwain, 78, has a miniature telescope implanted in this right eye to help recover some of the sight he lost from macular degeneration. 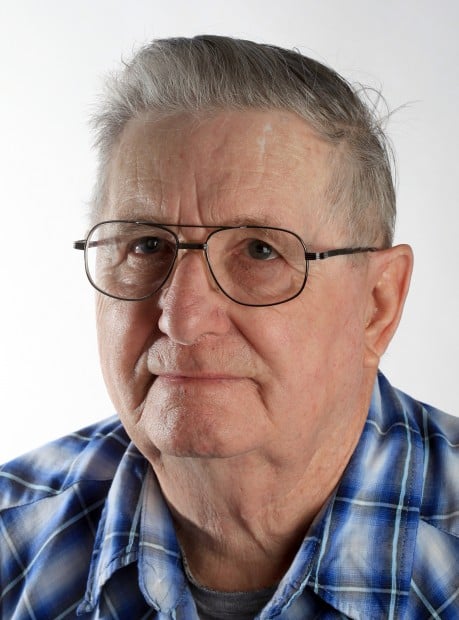 It was just a month ago that Lee McElwain was legally blind.

The Sturgis man's central vision had degenerated to the point that if you walked up to him on the street, your face would have been nothing more than a black blur to him.

“The things you miss the most are small things, sitting down and reading the paper, or reading the menu," the 78-year-old said. "It’s the little things."

Those everyday events are again becoming part of McElwain’s life, thanks to a new device and surgical procedure that offers the restoration of central vision in patients suffering from end-stage age-related macular degeneration (AMD).

AMD, which is the leading cause of blindness in people over age 65, affects an estimated 2 million people in the United States. The genetic disease destroys central vision at the macula, the central area of the retina where light-sensitive cells are the most dense, and it creates a blind spot in the center of the field of vision. It is not correctable by glasses, and until recently, it was not correctable by surgery.

A miniature implantable telescope (IMT) made by VisionCare Opthalmic Technologies in California and a treatment program developed by CentraSight was recently approved by the FDA and is covered by Medicare. The lenses are available in two models: one with 2.2 times magnification and one with 2.7 times magnification.

IMTs were recently implanted into the eyes of two patients of the Black Hills Regional Eye Institute. Only 100 of the painless surgeries have been completed nationwide.

“When I was watching TV before, I had to look with my peripheral vision,” McElwain said. “Now I can look at the TV and see. I can see faces a lot better, too.”

Rapid City ophthalmologist Dr. Steve Khachikian implanted the tiny telescope, which is about the size of a pea, inside McElwain's right eye last month. The device is positioned behind the iris, or the colored part of the eye, and it projects enlarged images in the field of view onto the healthy areas of the retina surrounding the macula.

Those images are enlarged, Khachikian said, which reduces the effect that the blind spot has on the central vision.

“It’s not as sharp as what we would normally see,” he said. “But if  (patients) look at someone, they can recognize them.”

“It’s kind of confusing because one eye is seeing one thing and the other eye is seeing another,” McElwain said. But his recognition will improve with time, he has been told, as he continues his therapy.

“The process is long,” Khachikian said. “They see an occupational therapist for two months.”

Therapy before and after surgery is a large part of the procedure, he said. It takes a team of specialists to make the process successful on the ideal candidate.

The patient must have end-stage macular degeneration in both eyes and can not have had cataract surgery. They must work with a low-vision specialist, a retina specialist and an occupational therapist before and after the surgery.

Khachikian said all of those requirements are in place in Rapid City, including Dr. Prema Abraham, who worked with the IMT patients with Khachikian.

According to both patients, it has been worth the work. The second patient, Ruth Gaetze of Mitchell, said she is able to see her grandchildren again.

McElwain, who was first diagnosed with the disease at age 45, now rides his bicycle near his house. Patients also report other basic life improvements such as easier maneuvering around their homes, reading, writing and other activities that had been lost to the disease.

“It’s really been fantastic,” Khachikian said, adding that he hopes to do more of the surgeries on appropriate patients in time.

“We don’t want to rush in,” he said. “But the two who have had it done have done fantastic.”

McElwain said he is still recovering, which includes a little bit of vision blurriness. The therapy has helped, he said.

“You’re training your brain,” he said. “When you look at something, it goes to one eye or the other.”

He said he only wished the surgery could have been done sooner, and he mentioned that he would recommend the procedure to other qualified candidates.

“It’s not a matter of life and death, but more a quality-of-life decision they have to make,” McElwain said.

Is it healthy for children to be vegetarians?

Vegetarian diets are healthy for kids, as long as they get key nutrients needed to grow healthy and strong. This can take extra planning at mealtime.

A Boston hospital is launching a landmark clinical trial to test a nasal vaccine intended to prevent and slow the progression of Alzheimer’s disease.

Scoliosis is a side-to-side curvature of the spine that can occur in about 1 in 300 children.

Blurb: Some front-line workers who die of covid-19 have been considered eligible for accidental death benefits because it is presumed their infection was contracted on the job. But some employers now suggest that if the workers didn’t follow established safety protocols, such as getting vaccinated, those benefits may be denied.

Thanksgiving is often the kickoff to a six-week food fest. Here are some ways to navigate the holidays without letting your healthy habits slip.

A miniature implantable telescope is about the size of a pea.

Lee McElwain, 78, has a miniature telescope implanted in this right eye to help recover some of the sight he lost from macular degeneration.