Minnesota cop will be charged in shooting of Black motorist

The accidental scientist: Emily Graslie shares the scoop by fully immersing herself in nature
Share this
{{featured_button_text}}
1 of 3 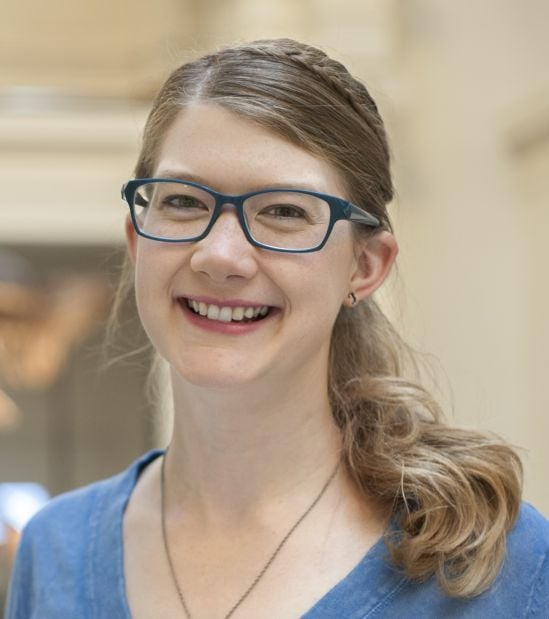 Emily Graslie started out as an art major, but has found her dream job delivering hands-on science at the Chicago Field Museum. 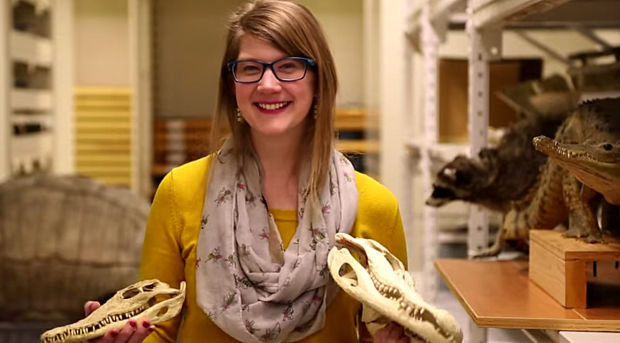 Emily Graslie is willing to dive in to just about everything — bones, blood and guts — in her videos.

"The Brain Scoop" episode featuring the skinning of a wolf has gotten 377,859 views on YouTube.

The 25-year-old Rapid City native is both artist and scientist — a passionate painter, musician and writer who dissects and discusses dead things with equal aplomb.

Graslie graduated from high school with artistic inclinations, but she’s since made a name for herself in the scientific community.

The 2007 Central High School graduate hosts "The Brain Scoop," a web series that delivers its more than 200,000 subscribers entertaining and unforgettable science lessons in the time it takes some teachers to call class roll. Shows are filmed out of the Chicago Field Museum, where Graslie works as “chief curiosity correspondent.”

Every other Wednesday, viewers get to watch a new YouTube episode brimming with wit and wonder. Graslie is funny and utterly into her subject matter, no matter how unpleasant or obscure. She’s not at all squeamish when prepping specimens for display.

In fact, she’s downright comical. When there’s nothing to skin or gut, she still keeps things interesting. She explains why the sail-backed Dimetrodon was not a dinosaur without sounding like someone who’s been around since overgrown reptiles roamed the earth. She’s truly thrilled about pinning an insect for the first time.

It’s her dream job, the kind of hands-on science that makes nerds swoon in their lab seats. But Graslie’s gig isn’t just for geeks. It’s science for the masses, delivered by an unlikely messenger.

Graslie wasn’t a science buff in high school. A semester of organic chemistry was the lone exception.

“It was the only science class I ever took that I enjoyed,” she told the Rapid City Journal in an email.

Graslie credits her organic chemistry teacher with pointing her in the right direction after high school. Beth Farrar was pursuing a master’s degree through Montana State University at the time and brought a brochure to class one day.

Graslie enrolled in the University of Montana instead, but she still credits Farrar with her decision to attend college in Montana.

That decision paved the way for Graslie’s artistic run-in with science.

Graslie was finishing up her studio art degree when she discovered the university’s zoological museum. What she saw took her breath away. Skeletons, taxidermied animals and sundry specimens spilled over into every square inch of space; it was a treasure trove of subjects just waiting to be sketched.

Graslie made arrangements with the school and museum curator to do an independent study on scientific illustration. She thought she would earn enough credits to graduate and move on. But her 2011 graduation came and went, and Graslie was still at the museum.

It became apparent early on how little manpower and money the museum ran on, so Graslie started helping out. Simple jobs grew into headier tasks. She even got a promotion: curatorial assistant. It was full-time job without pay, so Graslie worked in a bakery to cover expenses —and still found time to take online courses for a master’s degree in museum studies.

For 2-½ years, Graslie volunteered 30 to 40 hours a week. Science was no longer the stuff in textbooks. It was real and right in front of her.

A science star is born

Graslie decided her newfound fascination with the natural world was too good to keep to herself, so she started a blog to share her day-to-day discoveries.

Her musings caught the eye of Hank Green, a well-known host and producer of several YouTube channels. He paid Graslie a visit at the museum, requested a tour and asked if he could film it for an upcoming installment of his video blog series, "Vlogbrothers." The episode aired in December 2012. A month later, Green helped Graslie launch "The Brain Scoop."

Google “female YouTube stars,” and you’ll get pages of personalities with plenty to say about fashion, fitness, food and finessing preschoolers. There aren’t too many women dishing about science.

That gives Graslie a huge platform, but it’s one she’d like to share with other women. She wouldn’t mind seeing more female hosts of STEM (science, technology, engineering and math) series on YouTube.

If the comments on her blog are any indication, "The Brain Scoop" is engaging and inspiring a generation of would-be female scientists. Graslie largely hears from young women who enjoy watching her hands-on approach to science and want to be like her.

Women are underrepresented in STEM careers, so it’s important that girls can look to real examples of women in those fields, said Jessica Broullire, a local advocate for bridging the gender gap in math, science and technology.

Girls may lack the confidence to pursue such professions because they’ve received the subtle message that they shouldn’t be interested in math or science.

“There’s a lot of shyness,” said Broullire, who coordinates Operation SMART, a branch of Youth and Family Services’ Girls Inc. “So I like to give them a lot of real-life examples.”

Broullire helps her students get past the “yuck” factor by encouraging them to get their hands dirty within and outside the lab.

All that hands-on experimentation helps girls resist the gender stereotyping that suggests such activities are “gross” or only for boys, she said.

"The Brain Scoop" episodes begin with a “Grossometer” to caution those with weak stomachs. “The Two-Faced Calf,” a two-part series that aired in mid- and late March, warned viewers of coming attractions: “oceans of blood,” “dismemberment” and “visible organs.”

Viewers are sometimes mystified with Graslie’s fortitude in the face of so much blood and guts. This intrepid scientist can play it so cool because she’s truly enamored with the natural world — and it doesn’t hurt that she spent many a childhood summer immersed in it.

When one fan opined on her blog: “I would never use my hands … ever again after all the blood in that last episode,” Graslie assured the viewer she made sure her hands were squeaky clean after handling specimens.

Graslie also took a moment to put her work in perspective.

“I grew up spending my summers on my family’s ranch,” Graslie wrote. “I rolled around in the dirt, picked up and threw cow pies, pet wild animals and dogs that had never taken baths and feral cats with permanent kitty colds, swam in stock ponds and waded in drainage ditches and sat on dirty barn floors and climbed hay bales.”

Tom Graslie agrees those formative years on the ranch near Faith probably had something to do with the adventurous woman his daughter is today.

“She’s always been willing to try new things,” the Rapid City attorney said. “She has a real instinct for being an entrepreneur.”

Graslie and his wife, Dr. Carol Zielike, try to keep tabs on their daughter’s latest musings, doings and discoveries.

They follow her Twitter feed and tune in whenever a new episode of "The Brain Scoop" is released. Zielike carries around a copy of Glamour Magazine’s May edition, in which her daughter was named one of five female entrepreneurs to watch.

“I’m positive my parents are my No. 1 fans,” Emily Graslie said in an email. “They’ve been hugely supportive of this entire adventure.”

Sister Serri, likewise a professional wordsmith, lends her younger sibling advice about how best to phrase scripts for her show.

“I really credit all three of my sisters and my parents for the humor and tone of the videos,” Graslie said. “We’ve always loved to have a good laugh, and I like to incorporate that into my work as much as possible.”

Graslie finally left the University of Montana Zoological Museum for bigger and better things last June. The Chicago Field Museum’s impressive size and scope make it a world-class place to work and film "The Brain Scoop."

Graslie’s fame has only grown since her series moved to the Windy City. And so has the list of stuff to talk about. The Field Museum’s collection includes 25 million objects — everything from plants and dinosaur skeletons to bird bones and unearthed artifacts from ancient civilizations.

Graslie may have landed the role of a lifetime, but she has no interest in playing a part. The acclaimed science educator and the accomplished artist are one and the same. When she’s not making people smarter, Graslie makes art, music and scones. She still plays the violin, paints and bakes goodies for her friends — all interests she pursued before everyone knew her name.

“I would still consider myself all those things,” she said. “My passions and hobbies are central to my success and personality.”

What’s the scoop on the name?

"The Brain Scoop" comes from Emily Graslie’s first-ever YouTube appearance, in which she gives Hank Green a tour of the University of Montana Zoological Museum. Graslie informs Green that prepping bird specimens involves removing “the brain with a very sophisticated tool called a brain scoop.”

One of Emily Graslie’s first jobs was at Black Hills Bagels in Rapid City. According to Graslie, “I didn't realize at the time that having a job in a bagel shop would be so formative to who I am today, but I've got very fond memories of working there. After I graduated high school I continued to seek out jobs in bakeries and coffee shops because I loved that sort of environment. Now that I'm no longer working baking jobs I still bake in my free time to share that type of joy with my friends and colleagues at The Field Museum. I'd like to think they appreciate the cookies every week!”

Where can I watch 'The Brain Scoop'?

Watch Now: Why you should eat bananas

Watch Now: Why you should eat bananas

Will downsizing today contribute to an upgraded tomorrow?

Will downsizing today contribute to an upgraded tomorrow?

Emily Graslie started out as an art major, but has found her dream job delivering hands-on science at the Chicago Field Museum.

Emily Graslie is willing to dive in to just about everything — bones, blood and guts — in her videos.

"The Brain Scoop" episode featuring the skinning of a wolf has gotten 377,859 views on YouTube.