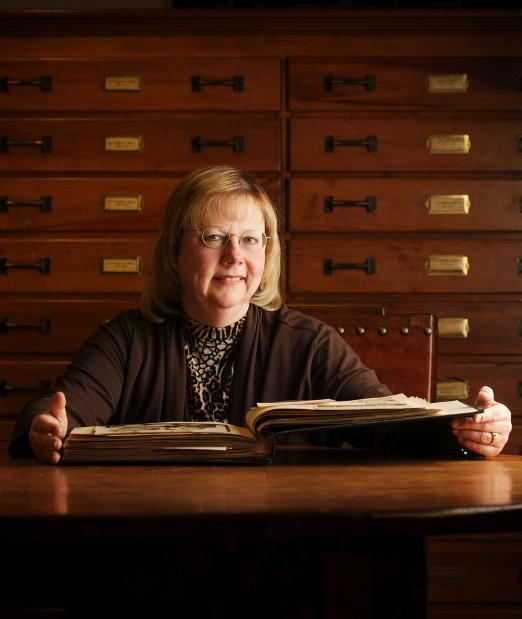 Mary Kopco teaches people how to make memory books. Kopco is the director of the Homestake Adams Research and Cultural Center in Deadwood. Kopco is seen here on Nov. 1, 2011. (Ryan Soderlin/Journal staff) 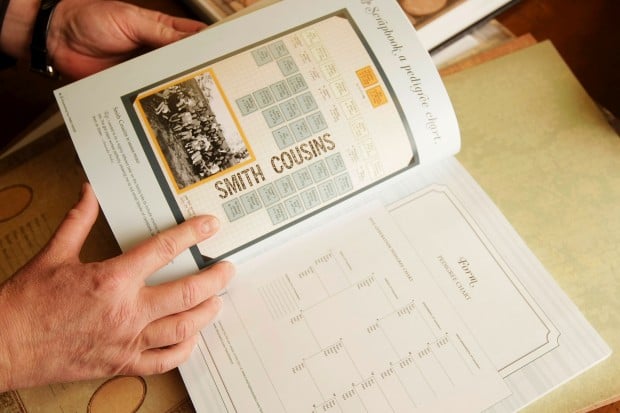 Mary Kopco said one of the best books she has found on making memory books is "Scrapbooking Your Family History, The Ultimate Workbook." (Ryan Soderlin/Journal staff) 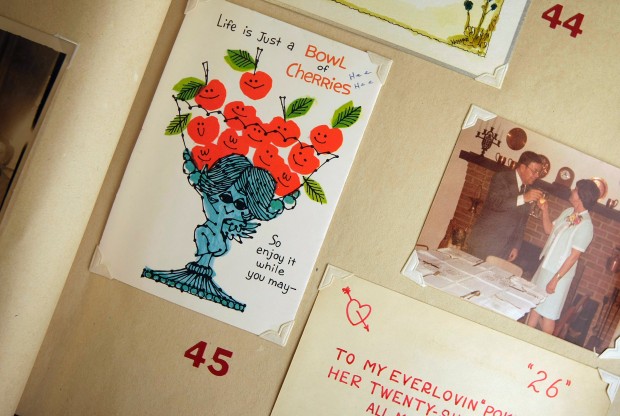 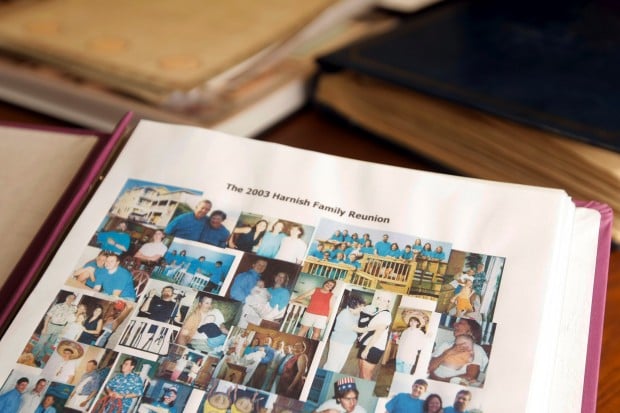 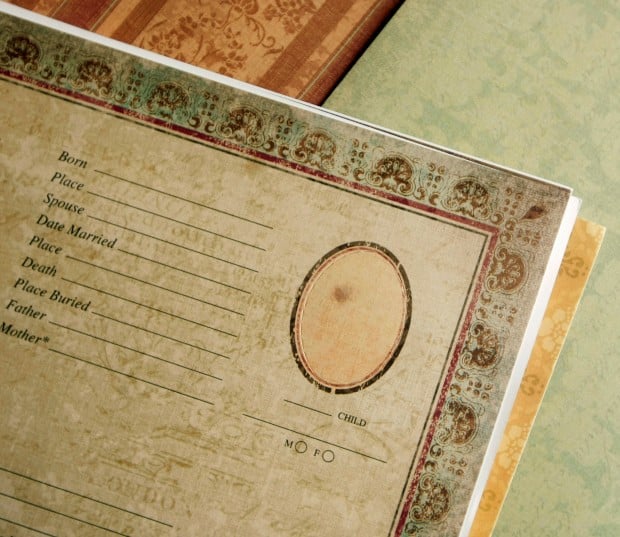 Acid free papers, like these, Mary Kopco said, can be found in many local crafting stores and some larger retail stores. (Ryan Soderlin/Journal staff)

As we enter into a paperless society, Mary Kopco is worried that our family histories will be lost forever. One way to preserve it is through family history memory books.

"Your family stories kind of get more and more faded as time goes by, and as a historian, it terrifies me that we live in an age that is increasingly going paperless," she said. "If people don't make a concerted effort to write down their stories or to record their stories - whether on audio or video - how are people going to remember us?"

Kopco teaches a class on preserving that history through family history memory books. She is the director of the Adams Museum & House, Inc., has been in the museum field for more than 25 years and has had an interest in her own family's history from a very young age.

There are many different types of memory books. They can be as simple as using a photo album with clear sheets that hold slips of paper. Or they can incorporate scrapbooking design techniques and printed papers.

You also can choose to do a digital book.

"The drawback to that is if you don't have a hard copy, and 10 years goes by and the technology is outdated, you've lost it," she said.

"I think it blows people's minds," she said.

She made a book for her father's 70th birthday, and it turned into a memoir of his life that included photographs, an account of his time during World War II, his family and his professional career through his retirement.

"My dad has never been one to be moved necessarily to tears, but he sure was close when I gave it to him," she said.

Whatever type of book you choose, Kopco said the critical thing is to just do it.

"It's so easy to say, ‘Oh, I really should do that,' and you just toss the photographs into a container," she said.

After a while, details such as dates, places and names become casualties to time.

You can choose the depth of the history you catalog. You can do a memory book that focuses on only you or on just your immediate family and then update it or create a new one every year, which she said is similar to scrapbooking.

Or the book can be more detailed and focus on your family heritage, such as the one she created for her father.

Kopco created memory books for each member of her immediate family as part of a family reunion in 2003.

She compiled those books using answers to a set of questions she sent to each of them, asking such things as where and when they were born; if they have any nicknames; their education, degrees or honors; and what they would like to be remembered for.

She included two photographs: one from when the person was younger and one that was more current.

"It's really fun because we continue to add to it as babies are born, and it's kind of an ongoing narrative," she said.

With the immediacy and convenience of the Internet and social networking, people don't even write letters any more, Kopco said. As one who also communicates through the Internet, she realizes the importance of keeping records of important events.

For example, her son, Alex, kept a blog during his semester in England. Rather than leaving his words in cyberspace, Kopco printed out all of his blogs to one day put in a memory book for him.

"People need to think to do that," she said.

Kopco recommends using paper and pages that are acid-free and to choose a type of book that can be expanded with additional pages later on.

Journaling is what distinguishes a memory book from a photo album or even a scrapbook, she said.

"They say a picture tells a thousand words. No, it doesn't," she said.

By including narratives in the book, you are creating family memoirs.

"A lot of people don't like to write or think they have to have it in perfect prose, but they don't. They just have to put it down," she said.

Because word-processing technology changes, it is important to keep hard copies of the stories you write, she said.

If you do not know much about your family's history, Kopco said there is help available through books or online genealogy websites, some free and some that require a paid subscription.

She is a paid subscriber to ancestry.com. That site has a pedigree chart, and other people can join and have access to what you are doing.

To gather stories about your family, Kopco said you also can conduct an oral history.

In the case of her family's history, she knows it well enough to skip a set format of questions.

But when she does a professional oral history, she always has prepared questions.

Having photographs nearby for the person to look at helps to spark memories or to bring out colorful stories.

"I just sit down and turn on the tape recorder or the digital recorder and start asking questions," she said.

Once the interview is over, she recommends transcribing it right away.

Not only can you have the person read it for accuracy, but you will then have a transcript of the interview.

For keeping actual audio copies of the interviews, she said you always have to stay on top of the technology and convert the recordings to the latest technology.

Another option is to keep a piece of that old technology around, she said.

She recommends scanning in your photographs and using the copies in your memory book.

She made the mistake of using originals in her father's memoir and is in the process of scanning those so she has copies.

When scanning photographs, she recommends printing out a hard copy using acid-free inks and acid-free paper.

Someday, that technology will have changed, too, she said.

The important thing is to start putting together an account of your family's history or stories now before they become lost in time.

You can even begin by using a formatted fill-in-the-blank memory book available in most hobby stores. Kopco said to start locally and expand globally.

"I think people get intimidated because they think, ‘I'm not organized enough' or ‘I'm not going to do it right.' That's why I tell them to just do it."

It started 17 years ago with just a few strings of lights and around 15 volunteers. Today, the Storybook Island Christmas Nights of Light is a…

Party Management 101: It’s all about the guests

NEW YORK - It would be so easy to give holiday parties if it weren't for the guests.

The holidays give us an excuse to jazz up the house with stuff we don't normally "wear" - essentially, it's dress-up time for our living spaces.

Area communities are getting in the spirit of the season and lighting up the Black Hills with activities, holiday festivals and parades.

The one thing you can do for optimal brain health

The one thing you can do for optimal brain health

Thousands line up before sunrise at Texas food bank

Thousands line up before sunrise at Texas food bank

Mary Kopco teaches people how to make memory books. Kopco is the director of the Homestake Adams Research and Cultural Center in Deadwood. Kopco is seen here on Nov. 1, 2011. (Ryan Soderlin/Journal staff)

Mary Kopco said one of the best books she has found on making memory books is "Scrapbooking Your Family History, The Ultimate Workbook." (Ryan Soderlin/Journal staff)

Acid free papers, like these, Mary Kopco said, can be found in many local crafting stores and some larger retail stores. (Ryan Soderlin/Journal staff)