When Kwane Stewart first decided to become a veterinarian, he had no idea his job would become less about the animals he treats and more about the humans who own them.

The 49-year-old animal lover spends his free time driving around California and spotting homeless people with animals. But his goal isn't to take away their pets — it's to treat them, for no cost at all.

Before taking on his role as "The Street Vet," Stewart grew up in New Mexico where he spent his childhood trying to rescue stray animals and dreaming about trading in deserts for beaches. This dream eventually led him to practice veterinary medicine in California, where he ran an animal hospital before becoming the county veterinarian for Stanislaus County in Modesto, California.

But when the Great Recession hit the US in 2007, Stewart realized he needed to do a lot more for the animals who had suddenly been tossed to the sidelines of a financial crisis.

"Modesto got hit especially hard, it was ground zero for California as far as job loss and home loss, and people were just dumping their pets in shelters," Stewart told CNN.

"That was the moment for me career-wise that was enlightening. Up until then, I'd been practicing high-end medicine for clients who could pay for everything. But suddenly I was thrown into this economic war and people couldn't even afford to help their pets."

When he isn't on the street walking around and looking for animals he can treat, Stewart works for Netflix as a movie set animal expert to ensure the safety of animals on movie and commercial sets.

A mission to keep animals with their owners

As the Great Recession drove California's homeless populations higher year after year, so too did it increase the number of animals on the street.

So one day in 2011, "on a whim," Stewart set up a table at a soup kitchen with his son and girlfriend. Anytime he spotted someone with an animal, he called them over and offered to give their pet a checkup.

"Before I knew it, I had a whole line," Stewart said. "There was something about it that I loved. I did it one more time before I decided to just take it to the street and walk to homeless people instead of waiting for them to walk up to me."

Some of the common illnesses the 20-year veterinarian treats include allergies, skin and ear infections, flea infestations, bad teeth, and even arthritis.

For animals who need vaccinations, medicine, or food, Stewart pays for the costs out of pocket. However, he often runs into animals with severe issues such as tooth decay or illnesses that need treatment at a veterinary hospital. For these cases, Stewart uses his GoFundMe to cover surgeries and invasive procedures which can cost pet owners thousands of dollars.

No matter where he is or where he's heading, Stewart always drives prepared with his medical bag — and animal treats — to make a stop whenever he spots a homeless person with an animal.

On weekends, he spends hours walking around areas such as Skid Row in Los Angeles and downtown San Diego in search of homeless pet owners who could use a helping hand.

So far, he has treated about 400 animals in the nine years he has worked as a street vet. Stewart documents many of his stories through his TV series, "Dr. Kwane: The Street Vet," which airs internationally in over 30 countries.

One of the most important lessons Stewart said he learned from working as a street vet is that almost everything he thought he knew about homelessness wasn't true.

"I had my own prejudgments, like a lot of people, about homeless people before I started doing this work," Stewart said. "You just make assumptions about their story without even knowing anything about them. You learn very quickly that you have no idea what put them there. It could be something like job loss which leads to bad credit, so they can't get an apartment, and these moments snowball quickly."

Homeless people face more than just judgment and stereotypes. Those with pets also face the misconception that they are incapable of caring for an animal, something which Stewart said he also considered at first.

"These homeless people take care of their pets even better than we do," he added. "When they own a pet, it engenders this generosity. They always make sure their pet is fed. Medically is where they need help."

During his time working with homeless people, he's seen them face physical abuse and harassment, ranging from police hassling them to move and drivers spitting and throwing food at them as they pass by. Their pets are often the sole form of emotional support.

Many of the people whose animals Stewart treats told him their pets "are better than any form of therapy." They serve as constant protectors, companions, and many times their only source of true love.

Along with beautiful stories and blossoming friendships, Stewart says the job also comes with a lot of happy tears, hugs, and constant life lessons.

"Above all else, I've learned that homelessness can be solved if we really want to solve it," Stewart said. "This is of our own creation. We've been putting Band-Aids on it for so long, with a free meal here and there, but there's not really a foundation to get them off the streets and keep them off the streets."

While solving the issue of homelessness will take many years, for now California has its street vet to make sure these humans and their pets will always have a home in each other. 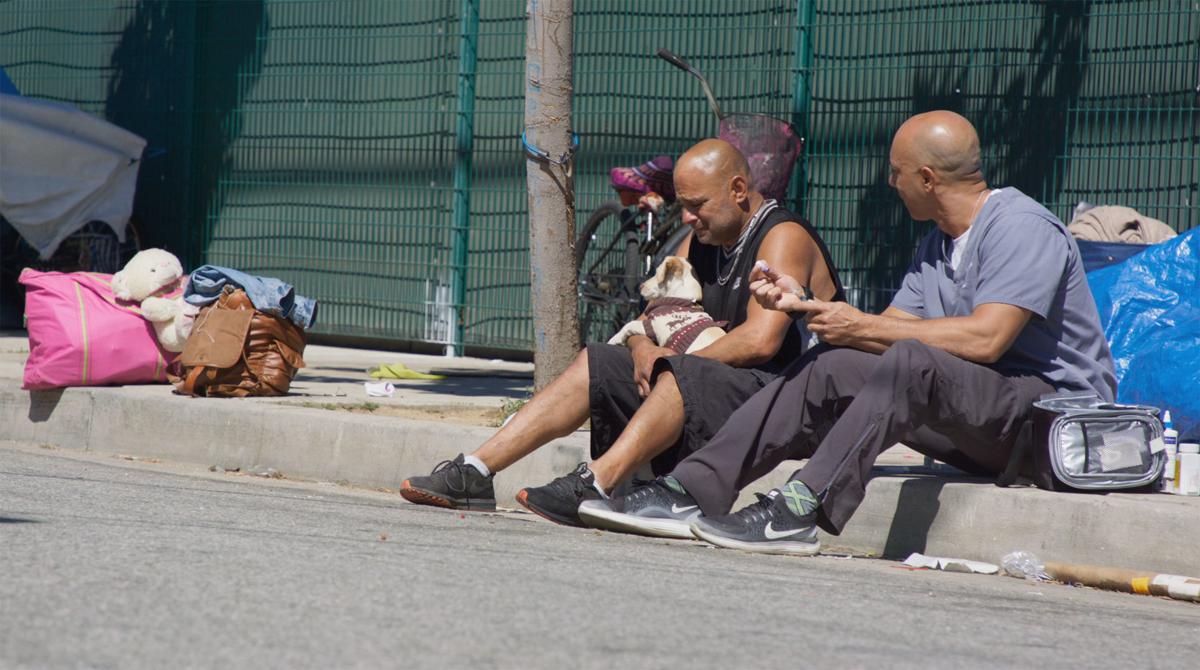 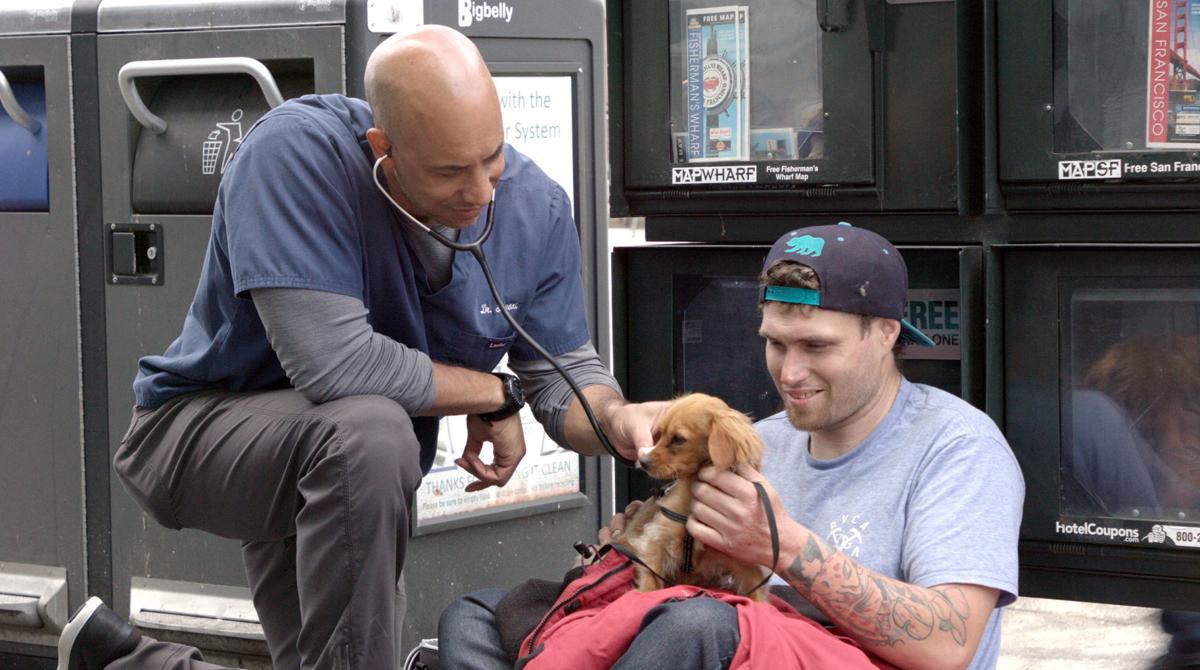 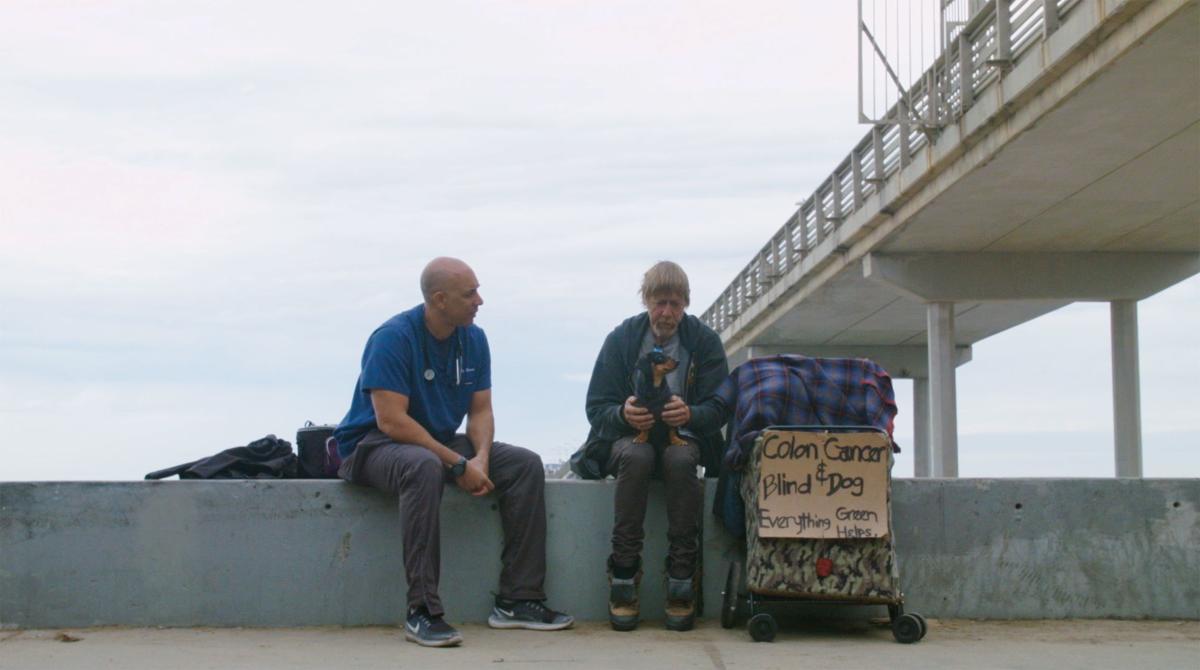 Kwane Stewart helping a man with colon cancer and his dog, Crazy Girl.