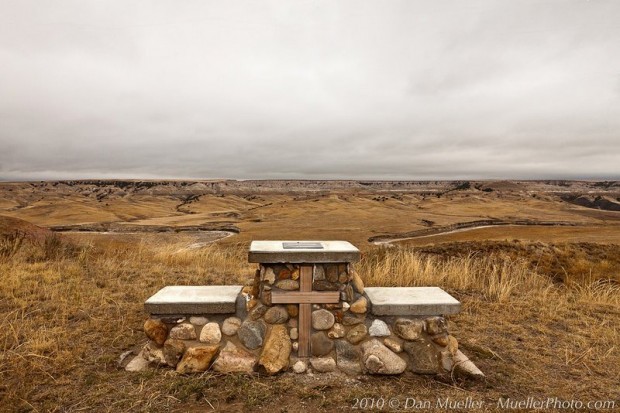 An outdoor altar at Christ Church Episcopal overlooking Red Shirt Table will be used during the Taize Pine Ridge event May 24-27. 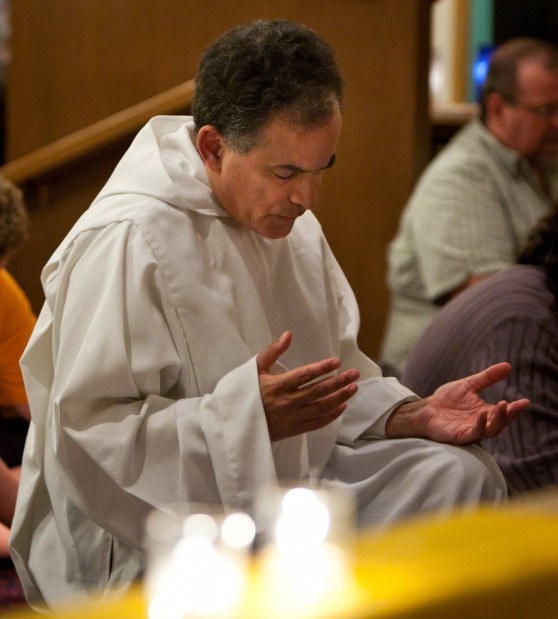 Brother John of the Taize community in France prays during a past visit to South Dakota. 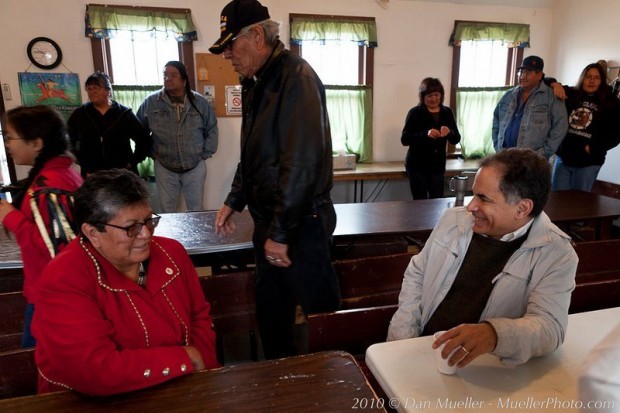 When a famous religious community in France brings its worldwide pilgrimage to a tiny church on the Pine Ridge Reservation this May, it hopes to start a conversation about reconciliation that will continue far beyond South Dakota.

On Memorial Day weekend, the brothers of Taize, an ecumenical monastic community in France, will partner with Lakota people to host hundreds of young people, ages 18-35, for prayer and conversation at Christ Church, an Episcopal church near Red Shirt in the northwest corner of the reservation.

The outdoor, four-day event is part of the “pilgrimage of trust across the earth” that the Taize community began more than 30 years ago that has taken the brothers and their unique prayer around the world -- to Rwanda, to Rome and now to Red Shirt — to encourage peace and reconciliation among all people.

"It's tremendous. It's the first time we'll do something like this on Pine Ridge," said the Rev. Robert Two Bulls, an Episcopal priest in Minneapolis whose family roots are at Christ Church, where his father, also named Robert, is the rector.

The May 24-27 gathering will include morning, noon and night prayer, with Bible study, workshops, small group sharing, meals and evening fellowship. Prayer in the Taize community is characterized by a meditatative style, simple music sung in repetition, and periods of silence to contemplate the presence of God. Like most people, Two Bulls' first exposure to Taize was through its music. "They're known for their music," he said.

The current friendship between Taize and South Dakota began in 2009, when a group of university students from the state, including two young Lakota men, visited Taize.

It was one of the very first times Native Americans joined the community, and the guests extended an invitation to the community to return the visit. Two Bulls likens them to the "scouts" of Lakota history. Brother John visited South Dakota in 2010 and again in 2011, stopping at the Pine Ridge Reservation and getting to know the Two Bulls family at Red Shirt.

A larger group, including a number of Lakota and Ojibwa young people, visited Taize for a week in 2011. And last summer, Micheal Two Bulls, 29, spent three months at Taize living and working with about 60 other long-term international volunteers there.

"I have to admit I was a little skeptical at first," he said of his initial experience of monastic community life. He was drawn, he found, to the simplicity of the communal routines. "What appealed to me was that there was no dogmatic things. When they do talk, it's very striking and truthful. That sort of dialogue appealed to me," Two Bulls said. "The simplicity of it really attracted me. It kind of reminded me of the way my ancestors lived."

The task of housing and feeding what is expected to be "hundreds" or more young adults at Red Shirt, given its lack of facilities, is a daunting one, said the Rev. Kathy Monson Lutes of Rapid City, one of the organizers.

Most participants will camp on site, but getting enough portable toilets rented, solid waste disposal, setting up a simple meal service and transporting people around the reservation as needed is all problematic. Just estimating the size of the crowd is difficult and Christian churches of all denominations in the area are working together to prepare for it.

Two Bulls is less interested in the number of people who show up as he is in the conversations the event is already promoting. The Oglala Sioux Tribal Council recently voted to support the event, including a tribe-owned buffalo for meals. "We were pleased by the tribal council involvement ... it was seen that it went beyond religion to community development," he said. Other denominations and churches, including Jesuits, Lutherans and Presbyterians, are offering to help. "We're accomplishing a goal of having dialogue with people we wouldn't normally have dialogue with," he said.

Two or three of the brothers of Taize will arrive in Rapid City on April 12 to begin traveling the state to hold prayer meetings and invite young people to Red Shirt.

“When we travel to visit other peoples and cultures we go above all to listen," said Brother Alois, prior of Taize, in a prepared statement. "In going to Pine Ridge we want to listen carefully to the story of the Lakota people, and listen together to what the Spirit is saying to us all in our attempt to create a world of solidarity and peace. Only by coming together beyond our differences in a climate of prayer and sharing can we find new ways forward.”

In other parts of the world, people often have an overly romanticized image of Native American people and their culture, drawn from history or films, he said. Conversely, national media coverage of Pine Ridge and other reservations often leaves the mistaken impression that life there is a story of "unremitting poverty, violence and despair."

That dichotomy is what makes the Taize Pine Ridge event so important. Young people there have another story to tell, one that avoids both extremes of idealization and hopelessness, Rev. Two Bulls believes.

He's arranging speakers and programs on the theme of reconciliation, "Toward a New Solidarity," for daily workshops during the event.

"It's kind of what this is all about. It's what attracted me to Taize to begin with, this idea of reconciliation in the world," he said. The world is divided along political, religious, racial, economic, cultural and other lines,  the elder Two Bulls said. "You name it, and we're divided."  But Taize speaks to the unity of all humanity through Christ. "They don't get all mixed up in the theological. Christ came into the world to reconcile. The church as an institution has its problems, but we have to go back to the gospel, daily, because that's what we're really all about."

His nephew has few expectations for the event, but hopes the "experience might blossom into something else," he said. "It will definitely be an experience, especially on the Pine Ridge Reservation."

When: Plan to arrive after noon on Friday, May 24, 2013 and leave after noon on Monday, May 27, 2013. If you are interested in arriving earlier to help with preparations and welcome, contact the welcome team.

Where: Red Shirt, a locality on the Pine Ridge Oglala Lakota Indian Reservation in South Dakota.

Who: The gathering is meant for young adults between the ages of 18 and 35. Because of the particular conditions of the meeting, we cannot offer accommodation to minors, and can only welcome adults over 35 if they are leading a group of people under 21.

Lodging: Participants will be camping in tents at the site of the meeting. If you are traveling from a great distance and unable to bring your own tent, please note that on your registration and we will find space for you. Simple meals will be provided.

For more information on the Taizé Community see www.taize.fr

Cities with the largest homes

Cities with the largest homes

Millennial Money: Reboot your budget to prep for reopening

Picture cruising your car deep into 2021 and never glancing in the rearview mirror. Vaccines, travel and a hope of normalcy are finally on the horizon.

Child welfare agency sees only half their cases in person

BOSTON (AP) — The Massachusetts child welfare agency is seeing only about half of their cases in person, according to the most recent data released by the agency in December and January.

KHN’s ‘What the Health?’: Health Care as Infrastructure

President Joe Biden’s infrastructure proposal includes items not traditionally considered “infrastructure,” including a $400 billion expansion of home and community-based services for seniors and people with disabilities, and a $50 billion effort to replace water pipes lined with lead. Meanwhile, the politics of covid-19 are turning to how or whether Americans will need to prove they’ve been vaccinated. Joanne Kenen of Politico, Tami Luhby of CNN and Sarah Karlin-Smith of the Pink Sheet join KHN’s Julie Rovner to discuss these issues and more. Plus, Rovner interviews KFF’s Mollyann Brodie about the KFF COVID-19 Vaccine Monitor.

After being forgotten in a desk drawer for almost 35 years, a sealed copy of the Nintendo video game Super Mario Bros. sold at auction last week for a whopping $660,000.

Startup cards can help build credit even in tough times

Norwegian Cruises asks CDC to allow trips from US in July

The Norwegian Cruise Line is seeking permission to resume trips from U.S. ports on July 4, requiring passengers and crew members to be vaccinated against COVID-19 at least two weeks before the trip.

Try this take on this comfort-food favorite! These individualized chicken pot pies with prosciutto and herbs are perfect for the whole family.

So you're one of 533 million in the Facebook leak. What now?

Here's what users should know about how the leaked data could be used, and how to protect themselves.

The cities with the largest (and smallest) homes

A recent trend in slightly smaller homes that began several years ago might be reversed by the COVID-19 pandemic. As homebuyers spend more time at home, they are seeking houses with more space.

After 400+ days in Texas shelter, dog returned after one day with new owners

Rusty the dog has spent 400+ days at the Humane Society of Central Texas. His latest adoption lasted less than a day, and he was back at the shelter.

Dr. Sanjay Gupta looks into the origins of vaccine hesitancy

Dr. Sanjay Gupta looks into the origins of vaccine hesitancy

An outdoor altar at Christ Church Episcopal overlooking Red Shirt Table will be used during the Taize Pine Ridge event May 24-27.

Brother John of the Taize community in France prays during a past visit to South Dakota. 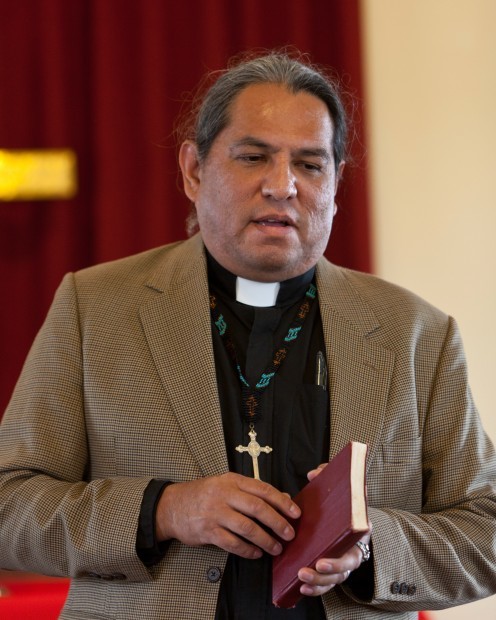