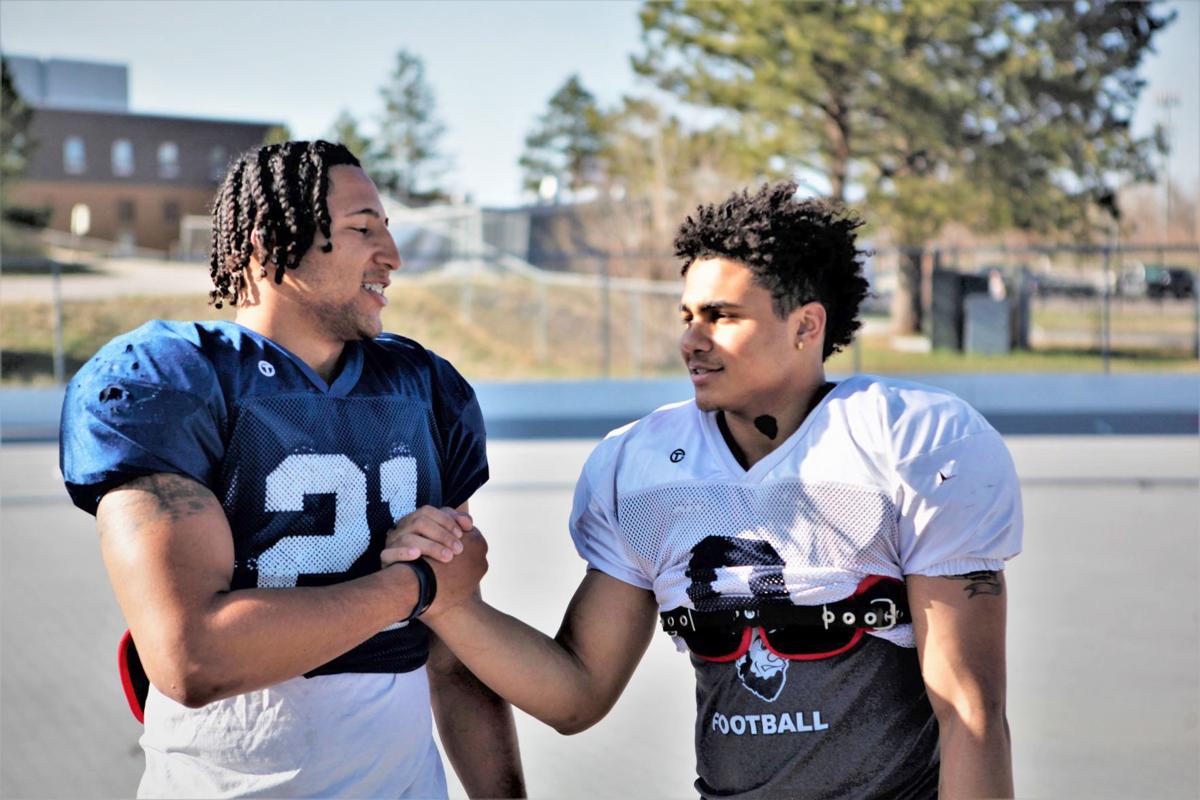 Brothers Adrian, left, and Isaiah Eastman never got to play football together in high school, but are enjoying their time now as teammates at South Dakota Mines. 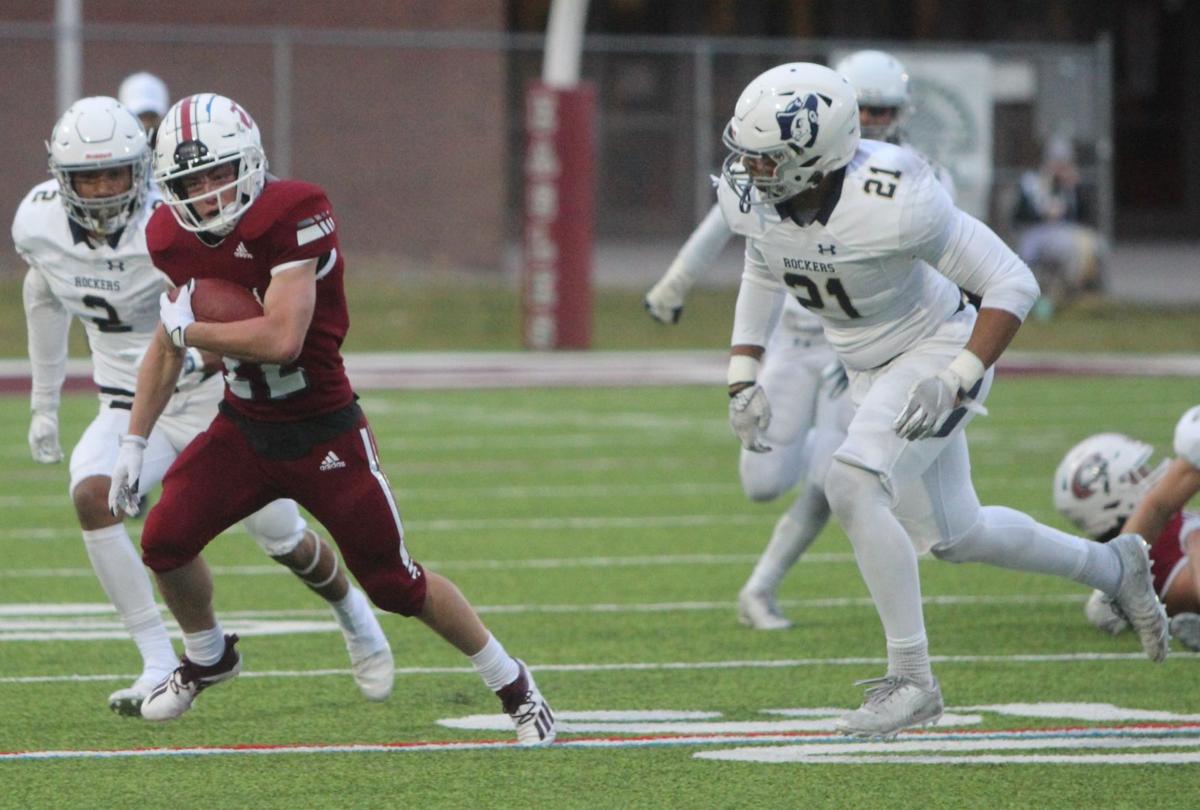 Adrian Eastman, 21, of South Dakota Mines chases down a Chadron State College receiver this past fall.

It took brothers Adrian and Isaiah Eastman to come to South Dakota Mines for the chance to get on the football field together once again.

Despite both being graduates of Higley High School in Gilbert, Ariz., they never played on the same high school team.

It's been a dream of theirs to finally play together and both have played big roles for the Hardrockers — Adrian as a defensive back and Isaiah as a running back/slot receiver.

Isaiah, who played his first season as a Hardrocker last fall, also said it has been a memorable experience to be able to play with his older brother.

“I’ve wanted to play with him my whole life," Isaiah said. "Coming up here and being able to work out with him and get better with him, just trying to get wins with him, it has been a great experience.”

The Eastmans aren't the only brothers on the Mines team — Collin and Spencer Zur have been with the program for a couple of years now. As the older brother, Adrian said that for the most part, he has tied to treat Isaiah like a normal teammate, although there are times when he is just his little brother.

"You obviously get to the point where you know, ‘He is my blood brother,'" he said. "It is nice to see him succeed.”

And there is no doubt the brotherly blood flows when they go up against each other in practice.

During practice it is competition, but during the game they watch each other on the field and cheer like brothers do.

Maybe not so much in practice.

“I try not to hit him too hard, wide receivers against DB’s. It is definitely a battle out there. We’re both going our hardest trying to get each other better. But I’m definitely the big brother,” Adrian said of his 6-foot-2, 205-pound stature, compared to Isaiah’s 5-10, 191-pound frame. “He’s definitely trying to avoid getting hit when he can.”

Isaiah admits that there is the, “I want to beat the big brother factor,” when they play on the opposite side of the football.

“We love going against each other, the one-on-ones in practice,” he said. “There is always that trash talk of, ‘I would have done this to you, I would have done that.’ It is the same when we go back to Arizona when we compete one-on-ones and stuff like that. I love it, I love the energy. He gives me more motivation to go out and play hard.”

Isaiah said he never likes to lose, whether it was against Adrian or their father, Sheldon.

“It doesn’t matter what it is, I’m like, ‘Let’s run it back right now,’” he said with a laugh. “I never want to leave with a loss. It’s always been a motivating factor of mine. I saw him come up here and play college football and I wanted to do the same thing. That’s all it is.”

Adrian came to Mines and stepped into the starting lineup right away in the 2018 season and finished with 56 tackles (34 solo) and had two interceptions, three pass deflections, one forced fumble and one fumble recovery. In 26 total games with the Hardrockers, he has 156 tackles (77 solo), 7.5 tackles for a loss, five interceptions, 13 pass deflections, two forced fumbles and two fumble recoveries.

Isaiah came in in 2020, and as a true freshman, led the team in pass receptions with 23 for 290 yards and three touchdowns. He also had four rushes for nine yards and returned 12 kickoffs for 252 yards.

Mines head coach Charlie Flohr said the Eastman bothers are great examples of what they want for the young men to be in their program.

“I’m really proud of how Adrian has stepped up on the leadership aspect on the defensive side of the football," Flohr said. "Isaiah came in and probably was one of our better playmakers last year and really established himself as a true freshman. We’re excited for what those two are going to be able to do in the next two or three years.”

Isaiah is listed at running back, but he basically plays wide receiver. He said he is just going with "athlete" and play where the coaches put him.

“I’ll take handoffs in the backfield, I’ll go out and catch passes,” he said. “It is whatever the coaches need.”

Adrian said it didn't surprise him that his brother found success right away with the team.

“Just watching him put in all that work and having him come in and see it pay off as a true freshman, which was kind of the same thing I did here, that was super cool to watch as an older brother," he said. "It made me super proud.”

Because of the pandemic, Adrian will have two more years of eligibility and Isaiah four more years. Adrian admits that he decided to play two more years so he could have more time on the field with his brother.

“That is going to be nice,” Adrian said. “I am supposed to graduate in May of 2023, so that extra year helps me get through school. But definitely, Isaiah being here makes me want to stay for sure.”

Isaiah said one of the reasons he came to Mines was because of his older brother. He also said the coaches and the players all made him comfortable to come here.

“They made me feel like I was already part of the team before I got up here,” he said. “I knew some of the incoming freshmen, so we had a good connection, a good bond. It all played a role for me to come up here.”

Both are excited for not only their future, but the team's future. The Hardrockers were 2-2 in the short fall season and they are both looking forward to the 2021 campaign and beyond.

Adrian said they’ve had steady improvement this spring, and he said their confidence level is going up for a lot of the players, which is big for a young team.

“A lot of guys got experience that they hadn’t had before,” Adrian said of the 2020 fall season. “I know defensively we have been young for the past two or three years, so the more experience you have in the game always helps. Offensively, we’re getting there for sure. A lot of those guys got experience too. We have a lot of pieces come together."

Isaiah said he thought it was a great first experience in college and he is looking forward to the future of the team.

"I think we’re putting together an amazing thing here," he said. "I think the coaches got something going. They are always preaching, ‘Be the change, be the change.’ I’m starting to see that here. I’m excited for the bright future that we have here.”

While the future is now for the Eastman brothers playing together, they both hope their football days aren't over when they graduate from South Dakota Mines.

“If I have a chance to play football after I am done here, that would be great,” said Adrian, an industrial engineering major. “If not, things will work out just having a degree from this school.”

Isaiah, a business management and technology major, admits he is too dreaming big right now.

"I would love a shot to play at the highest level," he said. "I’m working every day to accomplish that goal. I’m working my butt off and we’ll just see what happens."

Although their high school football experiences weren't together, they are making the most of their college years together on the football field.

"We’re here now, so we can look ahead to the future and be in the present right now," Isaiah said.

Brothers Adrian, left, and Isaiah Eastman never got to play football together in high school, but are enjoying their time now as teammates at South Dakota Mines.

Adrian Eastman, 21, of South Dakota Mines chases down a Chadron State College receiver this past fall.