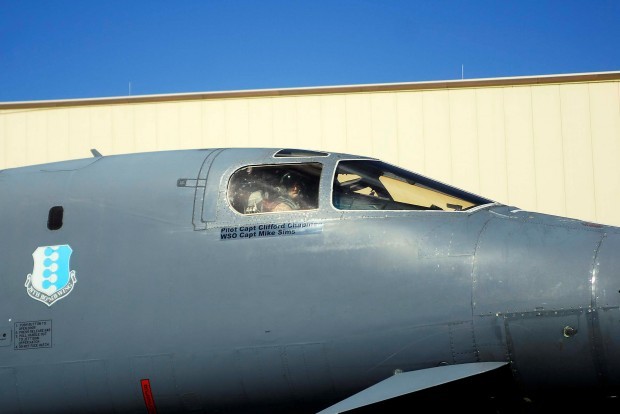 A B-1B Lancer crewman peers out the window of his aircraft as members of Ellsworth Air Force Base welcome him home from an airstrike mission in Libya on Wednesday, March 30, 2011. Officials would not provide the name of the airman. (Holly Meyer/Journal staff) 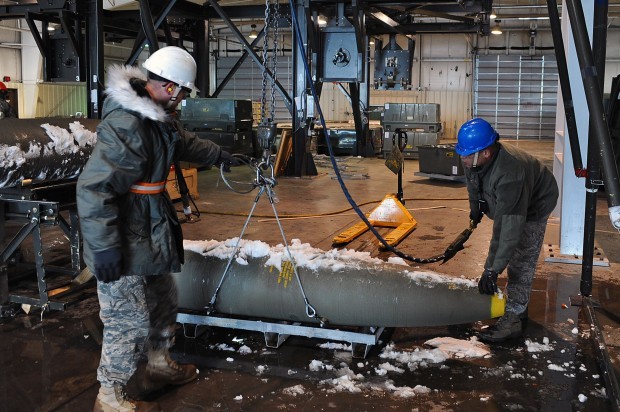 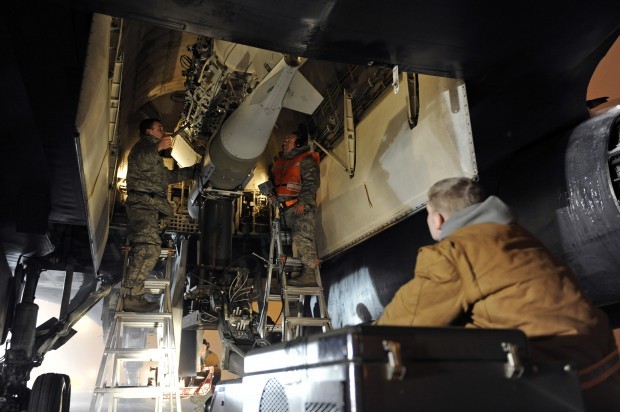 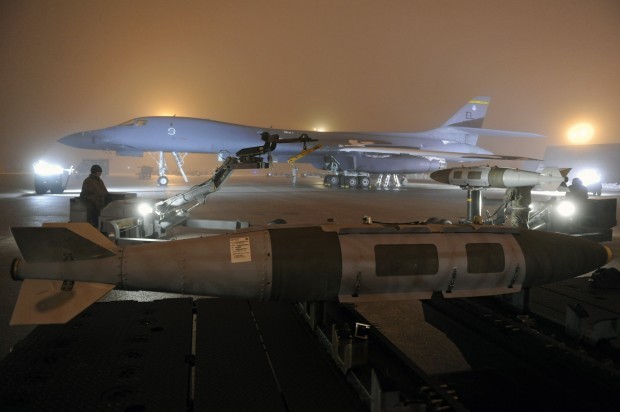 "We, of course, were striking military targets that were designed to protect the Libyan population," said Col. Jeffrey Taliaferro, 28th Bomb Wing Commander. "It was nearly 100 targets, nearly 100 weapons and those weapons did achieve their intended effects."

The two Ellsworth aircrews were a part of airstrikes in the NATO-led campaign against Libyan leader Col. Moammar Gadhafi and army units who still support him. In a Monday address, President Barack Obama defended the United States' involvement in the campaign, which he said is meant to protect the Libyan people targeted by Gadhafi and his forces and to support those rebelling against Gadhafi's rule. The U.N. Security Council imposed a no-fly zone over Libya on March 19, which authorized the military action.

Taliaferro would not reveal specific targets, but said they were spread out across Libya. A news release stated that coalition forces are striking at targets that pose direct threats to civilians or aircraft enforcing the no-fly zone. Targets, like military sites and air defense systems, are selected to limit their harm to the Libyan people, it said.

Launched early Sunday morning, the Ellsworth aircrews from the 34th Bomb Squadron had little notice of their departure.

"Just under two days from our initial notification to launch, we were able to generate several aircraft, hundreds of weapons and launch those aircraft to get them all the way around to the other side of the world to strike targets," Taliaferro said.

Capt. Matt Tull, a weapons systems officer on one of the two B-1s, said meeting a tight deadline is what they train for everyday.

"We are very flexible. We pride ourselves on that ability and really, just, it was just an amazing effort of teamwork," said Tull, shortly after he climbed out of his B-1 on Wednesday.

That training is what helped keep nerves at bay for the aircrews.

"I think we were all a little too focused on the task at hand to think too much about how we were really feeling," Tull said. "We were proud to do what we did. It was a bit exhilarating, and we're just really happy that everything turned out well."

On top of the mission's quick timeline, the flight from western South Dakota to Libya's airspace marked the first time the B-1 fleet deployed a combat unit from the continental U.S. to strike targets overseas.

"They launched from Ellsworth, flew half way across the world by air refueling and many hours later got to Libya and struck those targets," said Taliaferro, who added that such a mission is not new to all bomber aircrafts.

About 24 hours after their mission in Libya, the two B-1s hit the Ellsworth runway around 11 a.m. on Monday and taxied toward two long lines of saluting airmen. Under largely clear skies and warmer temperatures, the aircrews exited the B-1s to a welcome of handshakes, hugs and congratulatory messages.

Exhausted and fresh off their aircraft, fellow crewman Capt. Donavon Davis and Capt. Brian Baker felt honored that they had the opportunity to perform the mission over the other aircrews. They found the recognition for their success remarkable.

"It's incredible," said Davis, a pilot.

"I'm still kind of floored by the welcome we got," said Baker, a weapons systems officer. "This is almost as surreal as being over there."

Hear from schoolgirl who escaped abduction in Nigeria

Hear from schoolgirl who escaped abduction in Nigeria

A B-1B Lancer crewman peers out the window of his aircraft as members of Ellsworth Air Force Base welcome him home from an airstrike mission in Libya on Wednesday, March 30, 2011. Officials would not provide the name of the airman. (Holly Meyer/Journal staff)