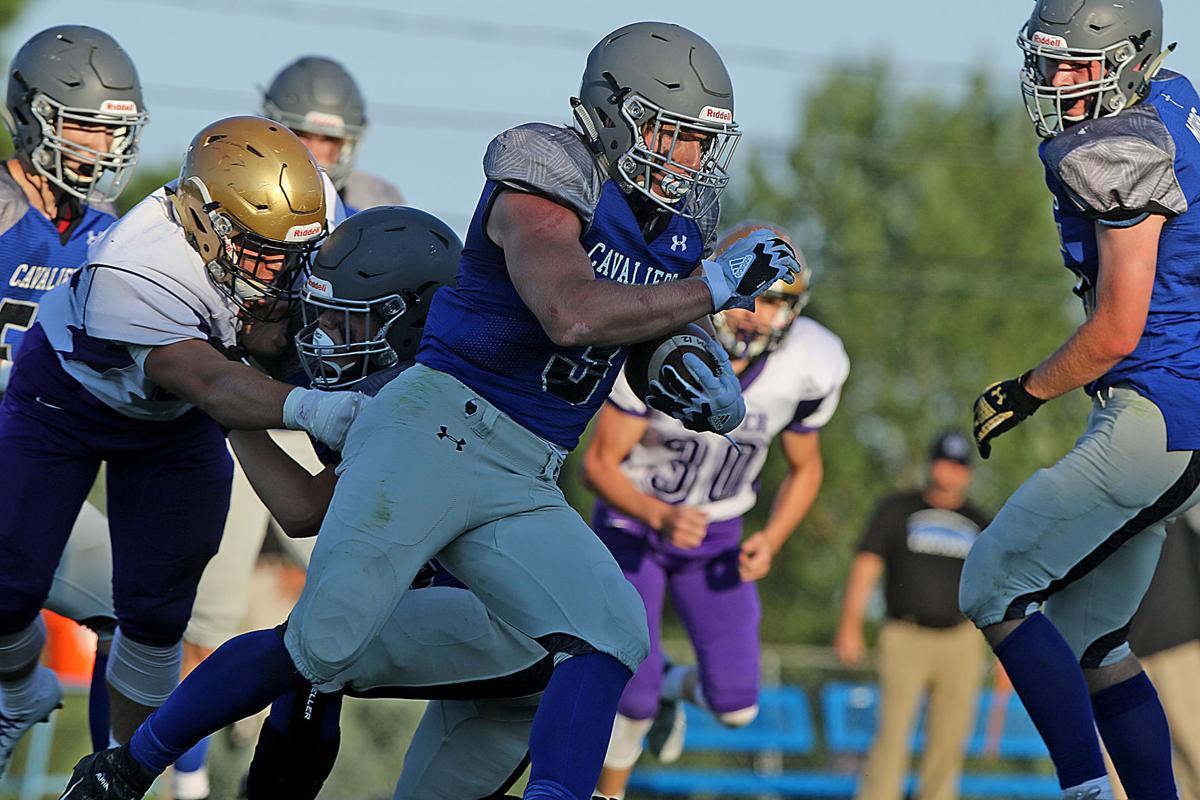 St. Thomas More running back Ryan Wojcik (3) carries the ball upfield during the Cavaliers’ game against Winner in Class 11B football action Friday at Dutton Field in Rapid City. 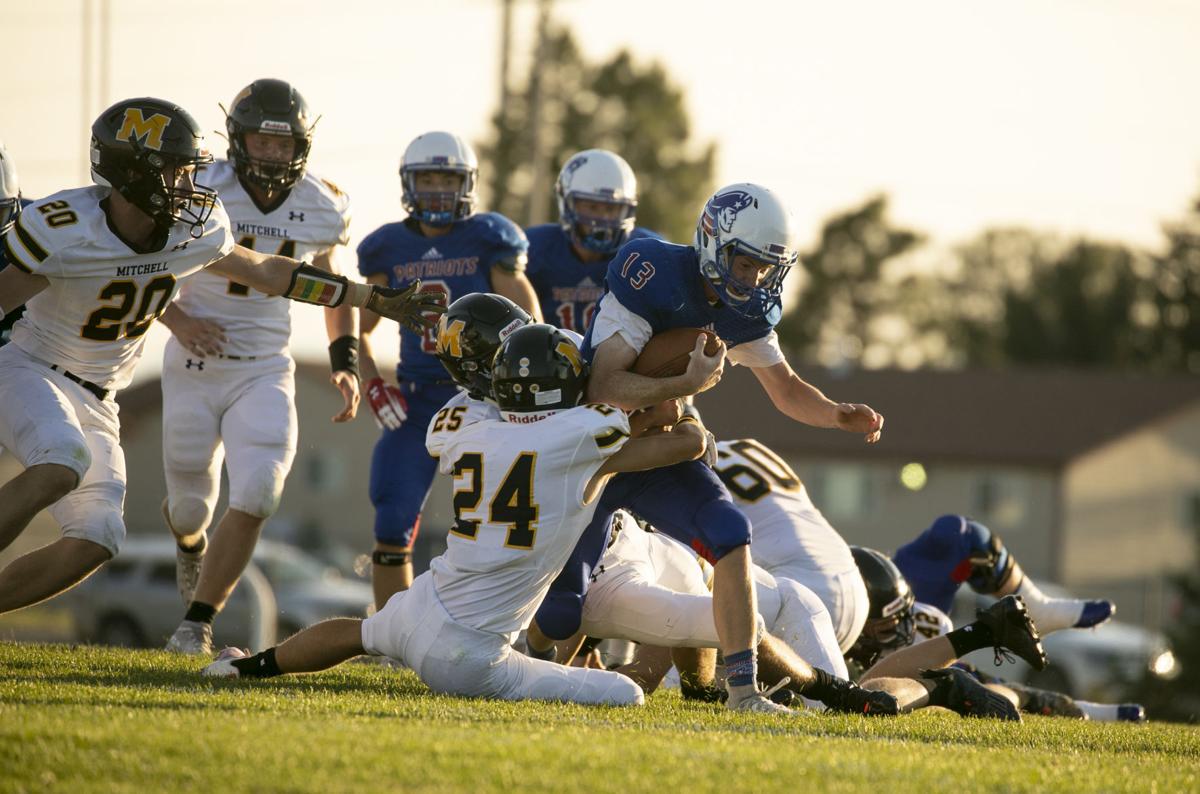 David Severson is tackled during the Douglas Patriots game against the Mitchell Kernels Friday.

I have to be honest, and I hope it changes very soon, but last weekend was not a good start for many local high school football teams in the old West River vs. East River scenario.

There's no way around it; it was a bummer of a beginning.

• Rapid City Central opened on the road with a 63-7 loss to Harrisburg.

• Rapid City Stevens opened on the road with a 43-0 loss to Sioux Falls O'Gorman.

• Belle Fourche opened on the road with a 35-0 loss to Vermillion.

• Douglas played a strong first half, but eventually lost 55-28 at home to Mitchell in its opener.

Granted, three of those games were against respective No. 1 teams, either last year or currently, or both. There were some highlights, but the end results made for a tough Friday night.

Don't shoot the messenger, but like they say, facts are facts.

Every year the question gets asked, especially to new coaches, "What do you have to do to be competitive with Sioux Falls or East River teams?"

It's a legitimate question and one that still needs to be answered.

I don't know what the answer is. I would imagine there are multiple reasons as to why high school football is a struggle West River compared to East River. It certainly is sports radio talk.

There's plenty of the season left and still hope. Area coaches and players are working on closing the gap, and certainly new head coaches need time. Just a little more success will go a long way in building these programs.

There has been some success on the gridiron from West River 9-man teams. Wall, New Underwood, Kadoka Area and Lemmon-McIntosh are all off to nice 2-0 starts.

One or two games early don't make a season, but it certainly doesn't hurt to stay on the left side of the won-loss margin as much as possible.

We at the Journal sports department have a bit of a staff shortage, as some of you know, which is certainly the case nationally with changes in the newspaper industry.

It was just a few years ago that you could find as many as eight to 10 bylines in the Journal sports section, which often numbered four to six pages or more on a regular basis.

The times, they are a changing. We're at two full-time sportswriters and maybe a couple of very part-time sports correspondents the last couple of years. At this writing, it's basically down to yours truly, with a little correspondence help from former Journal sportswriter Jeff Easton, Joe Kavanaugh (who now lives in Vermillion) and JR Hughes with the Black Hills Speedway, as well as from Journal news editor Kent Bush.

The good news is we have hired another full-time sports reporter, and his first day is Sept. 9.

We can always use some correspondence help, so if you can write timely sports story for next day publication, or features, call or email sports editor Richard Anderson at 394-8431 or richard.anderson@rapidcityjournal.com.

We'll give it a try.

This is intended for area high school coaches and athletic directors. There are way too many of you not reporting results. I know, we've changed and the times have changed.

But anybody who really knows me throughout the 38 years since I first became a full-time sportswriter (the last eight years in Rapid City), knows the changes in the business are eating me up. I'm probably as old school as it gets.

I do not like it when days, like Saturday, I was not able to get to a couple local events, like the Rapid City Christian volleyball tournament or the Rapid City Invitational tennis tournament.

That was on me, I was not feeling well with a Crohn's flare. Hence the need for more help.

At the same time, working together includes coaches, ADs and even parents if the situation works. Let's gets some publicity for your team, your players, your kids and grand kids.

A big thank you for those coaches and ADs, and even parental representatives who are supplying their team's results. The best way to get results these days to the Journal sports department are to email me at sports@rapidcityjournal.com.

P.S., I'm still working on the cross country and volleyball preview capsules that some coaches did send in (and some still need to). I will get them in.

St. Thomas More running back Ryan Wojcik (3) carries the ball upfield during the Cavaliers’ game against Winner in Class 11B football action Friday at Dutton Field in Rapid City.

David Severson is tackled during the Douglas Patriots game against the Mitchell Kernels Friday.