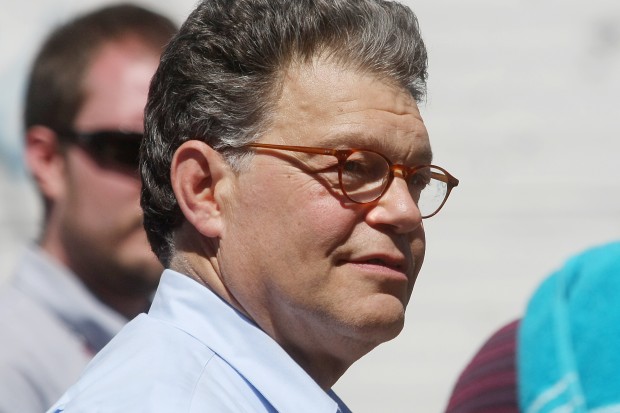 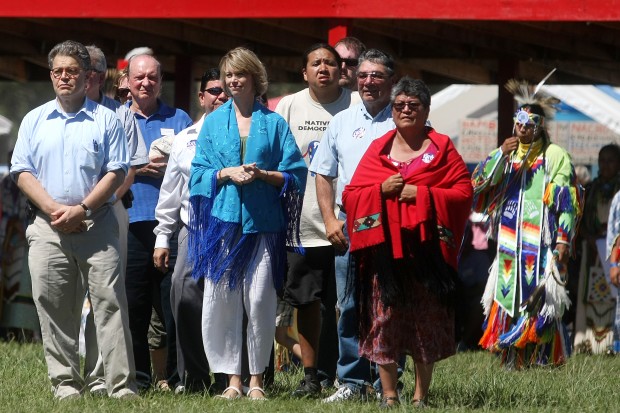 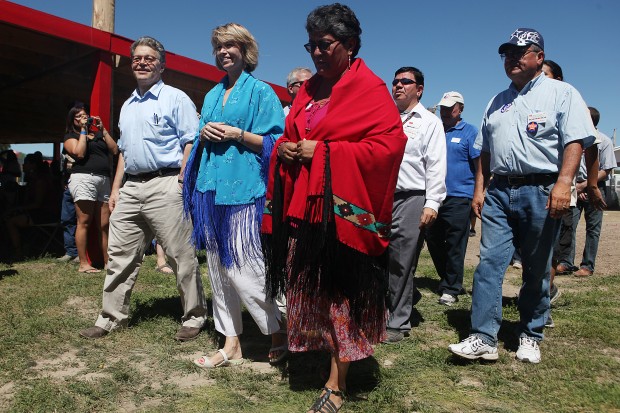 PINE RIDGE -- Lakota artist Joe Pulliam thought Sen. Al Franken’s visit to the Oglala Lakota Nation Powwow on Saturday was pure politics, and that was just fine with him.

“I liked him from his ‘Saturday Night Live’ days,” Pulliam, 41, said. “Of course, I think it’s all politics, but it’s sure nice to have him here.”

Franken, D-Minn., visited Pine Ridge at the invitation of Rep. Stephanie Herseth Sandlin, D-S.D., who faces Republican challenger Kristi Noem in November. As a member of the Senate’s Indian Affairs Committee, Franken said he was there to help his friend and colleague’s re-election bid but also to gather more knowledge about the Oglala Sioux Tribe and the housing problems that plague the Pine Ridge Indian Reservation’s 45,000 or so residents.

Herseth Sandlin and Franken met with staff from the Oglala Sioux Lakota Housing Authority and other tribal officials in a wide-ranging conversation that covered everything from social and economic problems on the reservation to the need to reform and streamline the Bureau of Indian Affairs for greater accountability.

The group gave Franken a litany of complaints about Congress underfunding treaty obligations and told him that Pine Ridge needs another 4,000 housing units to clear its waiting list for low-income housing. It also needs more law enforcement officers and better public safety if living conditions in the housing authority’s current 1,500 units are to improve, executive director Paul Iron Cloud said.

“Public safety is a housing issue,” he said. “It’s really sad to say our people are living in fear. The most important thing is to make our people feel safe.”

Franken said he hoped his visit would benefit Herseth Sandlin, as well as her constituents.

“Any time you are gathering knowledge, yeah, hopefully that helps. Eighty-five percent unemployment is a tragedy, and we have to do something about economic development here,” he said.

Pulliam was selling his artwork at a powwow vendor’s booth. He seemed to be in the minority of young powwow participants who recognized Franken’s comedy career. The senator left “Saturday Night Live” in 1995 and evolved into a leading voice for progressive/liberal talk radio. That launched him into the U.S. Senate in 2008 after he won the race by the slimmest of margins over incumbent Republican Norm Coleman.

His celebrity was lost on the powwow announcer, however, who introduced Franken as “Allen Franklin, a candidate for Senate.”

“I don’t think he’s a political junkie,” joked Franken of the announcer. “And I’m glad I’m not running for re-election this year.”

Franken said he was in South Dakota to help Herseth Sandlin at the polls in what promises to be a tough mid-term election for Democrats. Despite their different voting record on such issues as health care reform and cap-and-trade legislation, Franken said, he is a supporter of hers.

“I think she’s a great leader, and I really believe in her,” he said. “She has voted differently than I voted on a couple of things, but we need to be able to have somebody here in South Dakota who’s going to vote for Speaker Pelosi, not for Speaker Boehner.”

Herseth Sandlin defended Franken’s visit as “good for the nine sovereign nations I represent.” She said Republican criticism of it was political posturing.

“I’ll work with the most liberal and the most conservative if they want to do right by Indian Country,” she said. “I think that criticism is all about politics and not about the right policies to meet our treaty obligations to Indian Country.”

It is never not a good time to have folks from other parts of the country spend time on South Dakota's reservations, Herseth Sandlin said. "This is a national embarrassment that conditions like this exist."

Herseth Sandlin said that if conservative Republicans John Kyl from Arizona or Tom Coburn of Oklahoma, with whom she worked closely to pass the Tribal Law and Order Act, care about Native American issues, then "it shouldn't be criticized that Al Franken is willing to spend time here in Pine Ridge meeting with some of my constituents."

Before meeting with tribal officials, Franken and Herseth Sandlin joined 345 registered dancers and about half that many children dressed in full Native American regalia for grand-entry ceremonies under a blazing sun that produced temperatures near 100 degrees. The dancers were competing at the four-day event for about $72,000 in prizes.

Herseth Sandlin was there looking for votes by promising to keep fighting in Washington for the same things that she said every parent and every elder on Pine Ridge want for their children and grandchildren: a safe community, a healthy child and a well-educated child.

With 11 reservations in Minnesota, Franken told the powwow crowd that he already knows “many of the challenges that face Indian Country and Pine Ridge.” Instead, he told them -- in what was part story, part stand-up comedy routine -- about attending his first powwow on the Red Lake Indian Reservation in northern Minnesota.

He asked an Ojibwe woman for advice on how to conduct himself during it, and she told him that, no matter what, “don’t dance.”

“She said Gov. Pawlenty danced two years ago, and they still haven’t stopped making fun of him,” Franken said.

Franken’s advisor advised him to “be funny” on that visit.

Eventually, he did dance that day in Minnesota, after extracting a promise from the entire crowd that “they wouldn’t make fun of me after I leave.”

And he was funny, too.

“So, I begin to dance alone, and suddenly I got people laughing,” Franken said.

Canary Islands: Lava flows engulf houses on their way to the sea

Canary Islands: Lava flows engulf houses on their way to the sea