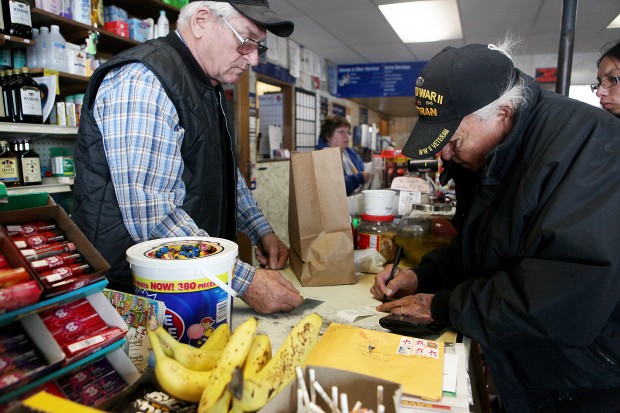 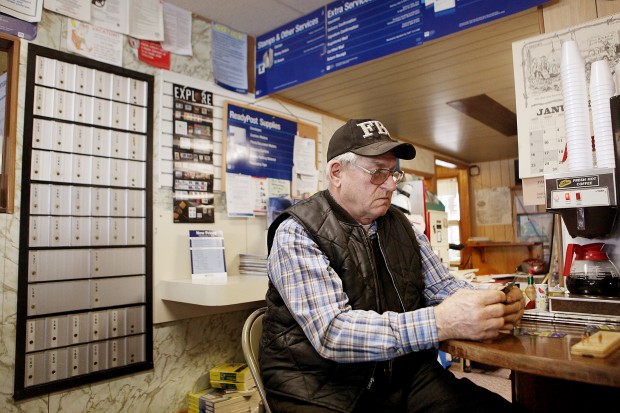 Bob Hansen has owned Howe's Store for 34 years. Located inside the store is a U.S. Postal Service office. Hansen said that if the post office closes he fears his store will be the next to go because he would lose so much business from the people that stop in to buy things when they pick up their mail. "If you close the post office, the store goes with it," he said. "You just can't make it out here." (Kristina Barker/Journal staff) 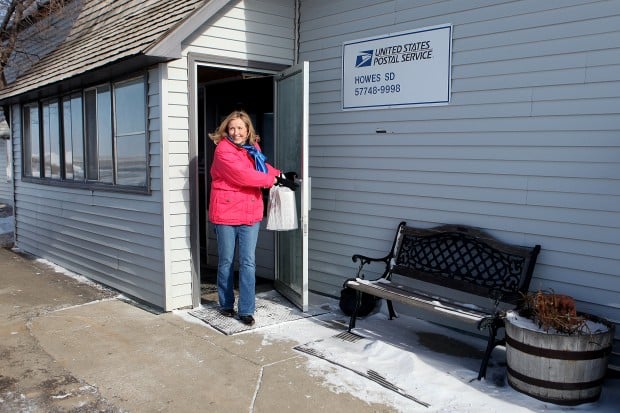 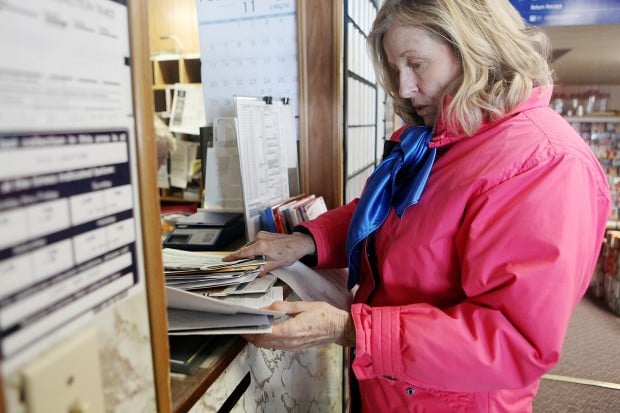 Joan Wink knows that her use of internet-based services, such as online bill paying and e-mails to friends, family and business associates, plays a tiny part in the U.S. Postal Service's huge financial problems - a record-breaking $8.5 billion deficit in fiscal year 2010.

"I do everything online. Through the years, I could see that happening more," Wink said.

The retired college professor and ranch wife from Howes may be part of the problem, but she is also a loyal customer of the Howes Post Office, which she and her state legislator husband, Dean, use almost daily because of its proximity to their ranch 28 miles south of Faith. Like a lot of people who live and work in remote rural areas of western South Dakota, she is worried about recent reports that the postal service is reviewing the profitability of as many as 20,000 post offices nationwide with plans to target the ones that are bleeding the most red ink for closure.

"I heard about it on the news, and I wondered if maybe Howes was on the list," Wink said. Despite her online habits, Wink is also a big consumer of face-to-face postal services from Howes postmaster Lavonne Hansen. "I'm mailing things all the time. I still mail letters like crazy. I use them non-stop to send and receive books and packages to the grandkids."

There is no specific closure list for any state, according to Postal Service spokesman Pete Nowacki.

"There is no set number of offices by state area or district to be closed," Nowacki said. "The Postal Service is taking each office's financial situation into consideration, as well as its proximity to other post offices or other access to postal services (such as automated postal centers, grocery stores, Costco or Office Depot locations, etc.). Reviews are ongoing, but no decisions on specific offices have yet been made."

"Red Owl, Plainview, Marcus, Stoneville ... they've all lost post offices," said Hansen, who hasn't heard any thing specific about the future of Howes from Postal Service officials. "I'm concerned about any small post office. They're all at risk."

Post offices in isolated rural areas usually operate at a deficit, just as Howes does. During Fiscal Year 2010, which ended Oct. 30, the Howes post office had revenues of $11,177 and total expenses of $42,399, Nowacki said. In its last year of operation, the Prairie City post office had an operating deficit of $19,000. Numerous other small post offices - at out of the way places like Enning, White Owl, Reva and Milesville - face similar financial scenarios.

The Howes post office is inside the Howes store, the only business in Howes, which is on a lonely stretch of S.D. Highway 34. Sturgis is 85 miles away and Faith is 28 miles to the north. People who live in the area, including many from the nearby Cheyenne River Indian Reservation, come to Howes to shop for groceries, buy gas, drink coffee or enjoy a game of cards or cribbage. "It's the neighborhood gathering place," said Hansen. "It's the only thing in the community of Howes - and the only post office for 28 miles around."

"It's kind of a hand in glove thing," she said.

But rural post offices aren't the only ones at risk. The main downtown post office in Yankton and a branch office in Aberdeen are both slated for closure this year. Increasingly, the Postal Service is competing with social networks and other forms of cyber space communications for customers.

"Given the extraordinary decline in mail volume and customer traffic, the Postal Service must take action to reduce the size of its retail network," Clem Felchle, manager of the Sioux Falls-based Dakotas District, said in a news release. "By consolidating, streamlining and adjusting our operations, the Postal Service becomes a more efficient and effective organization."

Balancing profitable services with operating deficits has always been a reality for the Postal Service, which was founded 236 years ago on the principle that "every person in the United States - no matter who, no matter where - has the right to equal access to secure, efficient and affordable mail service," according to former U.S. Post Master General John Potter's forward to "The United States Postal Service: An American History."

That philosophy is the basis for the federal law that prevents the postal service from closing any post office solely for economic reasons. Sen. Thomas Carper, D-Del., has proposed legislation, which is supported by the postal service, that repeals the law. The biggest financial strain on the Postal Service now is the congressionally imposed funding requirements for its future retirees, including employees like Hansen. She plans to retire soon after nearly 35 years working for the postal service.

"Unlike other federal agencies and most private businesses, the postal service is now required to set aside between $5.5 and $5.8 billion each year through 2016 to pay for health benefits for future retirees," Nowacki said. "We would prefer to go to a pay-as-you-go structure."

Ruby Van Den Berg, 86, thinks the Postal Service is failing rural residents like her and her husband, Herman, who live on a ranch 20 miles south of Prairie City.

"From what I understand, the upper crust in the post office gets plenty of money, but they can take away what we have," Van Den Berg told the Wall Street Journal in a recent article about the postal service's woes that included a look at the Prairie City closing.

Van Den Berg said she got two telephone calls about three weeks ago from "a woman named Jennifer from D.C." The caller I.D. on her telephone said "Dow Jones," she recalled, but she didn't realize she was speaking to a Wall Street Journal reporter until another reporter from Boston called her last week to inquire about the story. "It was a surprise to me," she said.

The Van Den Bergs still get their rural route mail delivered three times a week, just like they have for many years, but in the past year they have gotten used to driving 40 miles one way to Bison to mail packages or pick up registered mail. "The big inconvenience is having to go to Bison ... but we make do, just like we always do out in the country," she said.

"When they pulled the rural route out, our customers were so upset," Hansen said. "We're supposed to be a service-oriented agency."

Wink is concerned about what she would do if Howes loses postal service. As an educational consultant and author who still does work for California State University Stanislaus, she depends on it for many things, not the least of which was Hansen's help in selecting just the right mailing box to safely return an expensive jacket that Wink had borrowed to wear to the inauguration of Gov. Dennis Daugaard last month.

"I get such great service there," she said. "I literally don't know what I'd do if they closed, because we're really isolated out here."

Bob Hansen has owned Howe's Store for 34 years. Located inside the store is a U.S. Postal Service office. Hansen said that if the post office closes he fears his store will be the next to go because he would lose so much business from the people that stop in to buy things when they pick up their mail. "If you close the post office, the store goes with it," he said. "You just can't make it out here." (Kristina Barker/Journal staff)

Joan Wink picks up her mail at the Howe's Store on Tuesday morning, Feb. 1, 2011. Sen. John McCain, R-Ariz., has proposed a bill that would close rural post offices across the country. The U.S. Postal Service office at the Howe's Store could be affected. (Kristina Barker/Journal staff)
© Copyright 2021 Rapid City Journal, 507 Main Street Rapid City, SD | Terms of Use | Privacy Policy
Powered by BLOX Content Management System from TownNews.com.
You don't have any notifications.