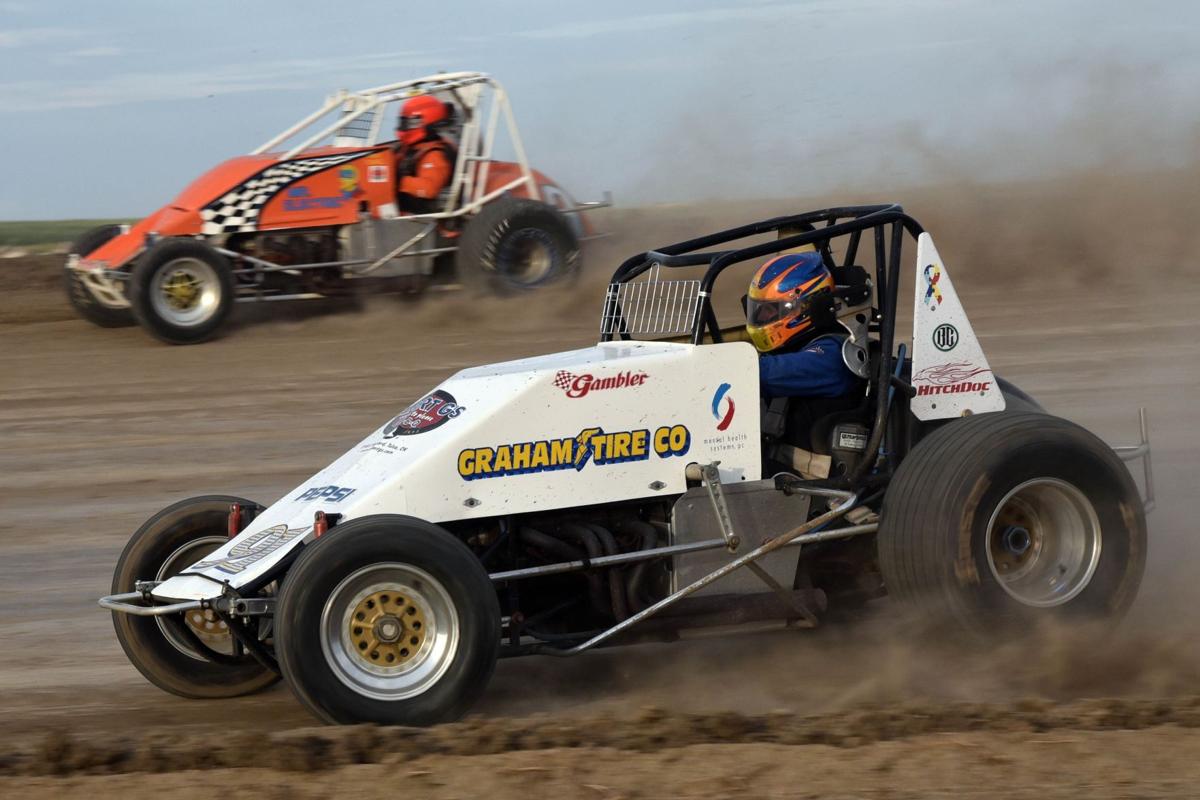 Rick Shuman ducks under Mike Pennel in wingless sprint action on turn 3 Saturday at the Bandit Speedway near Box Elder. 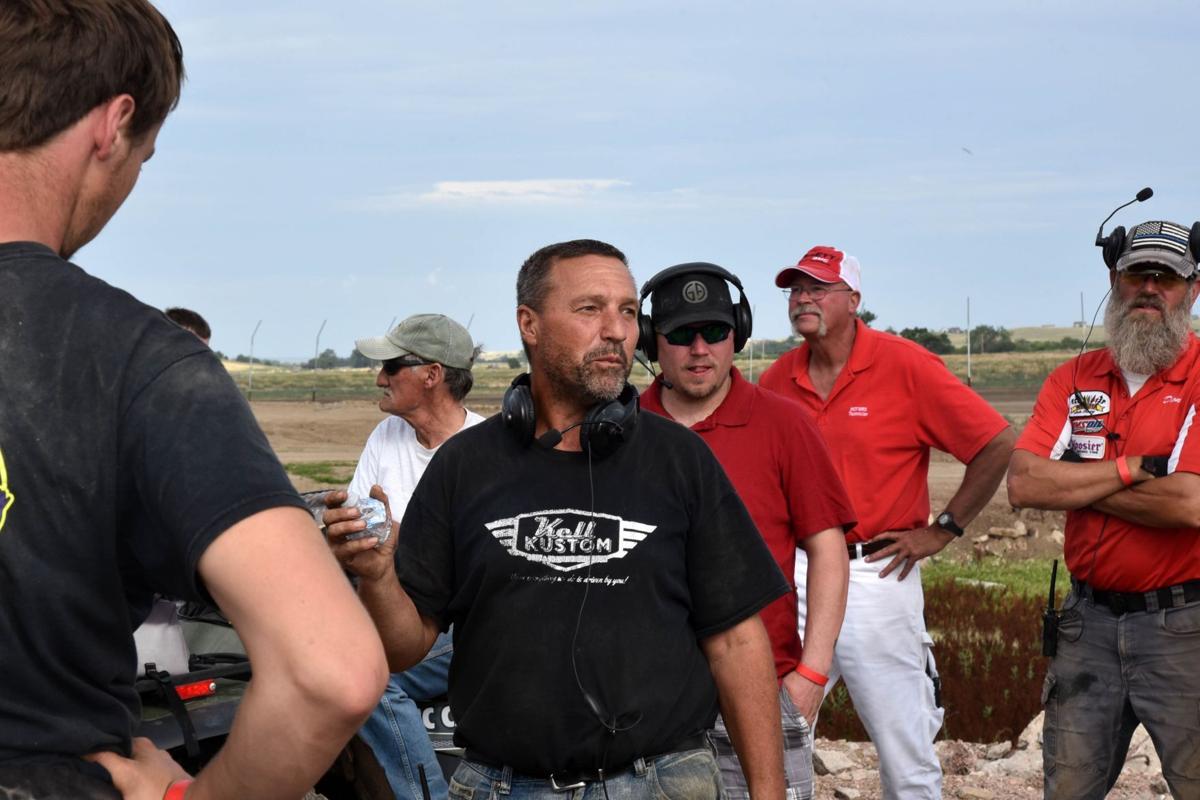 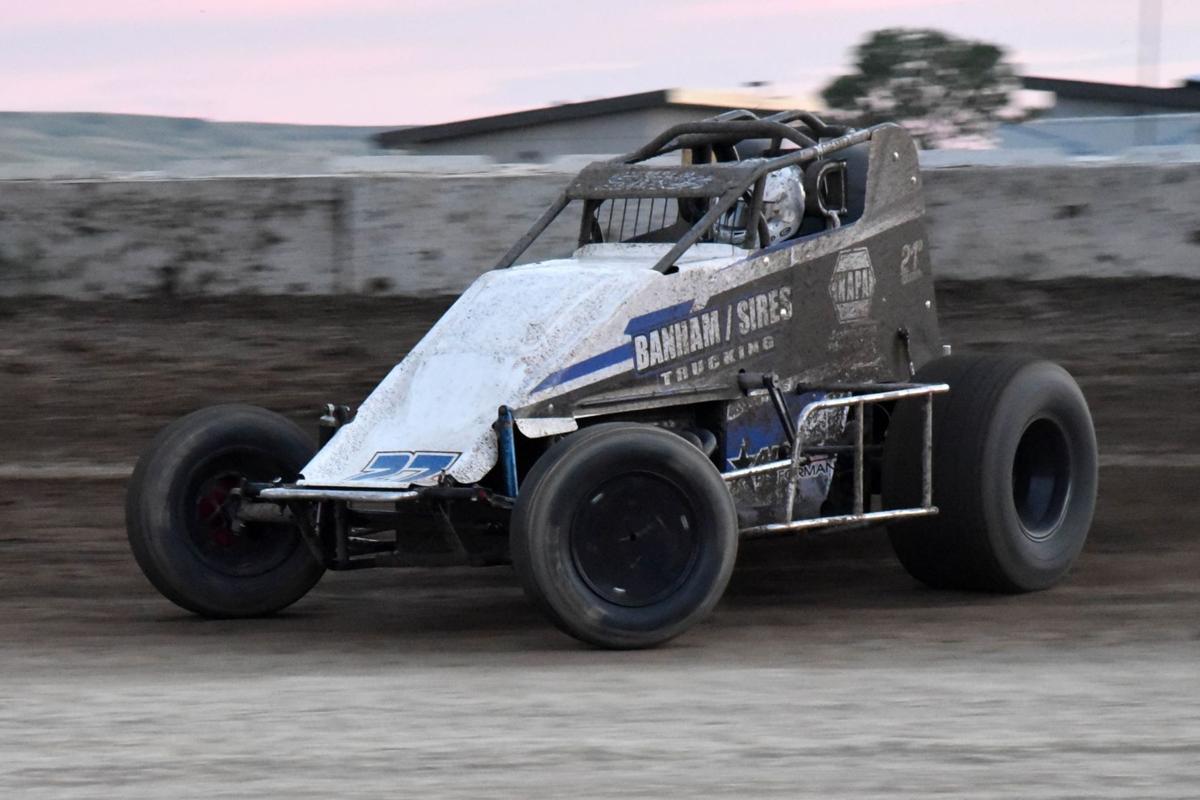 Tom Sires rumbles out of turn two Saturday in the wingless sprint competition at the Bandit Speedway near Box Elder. 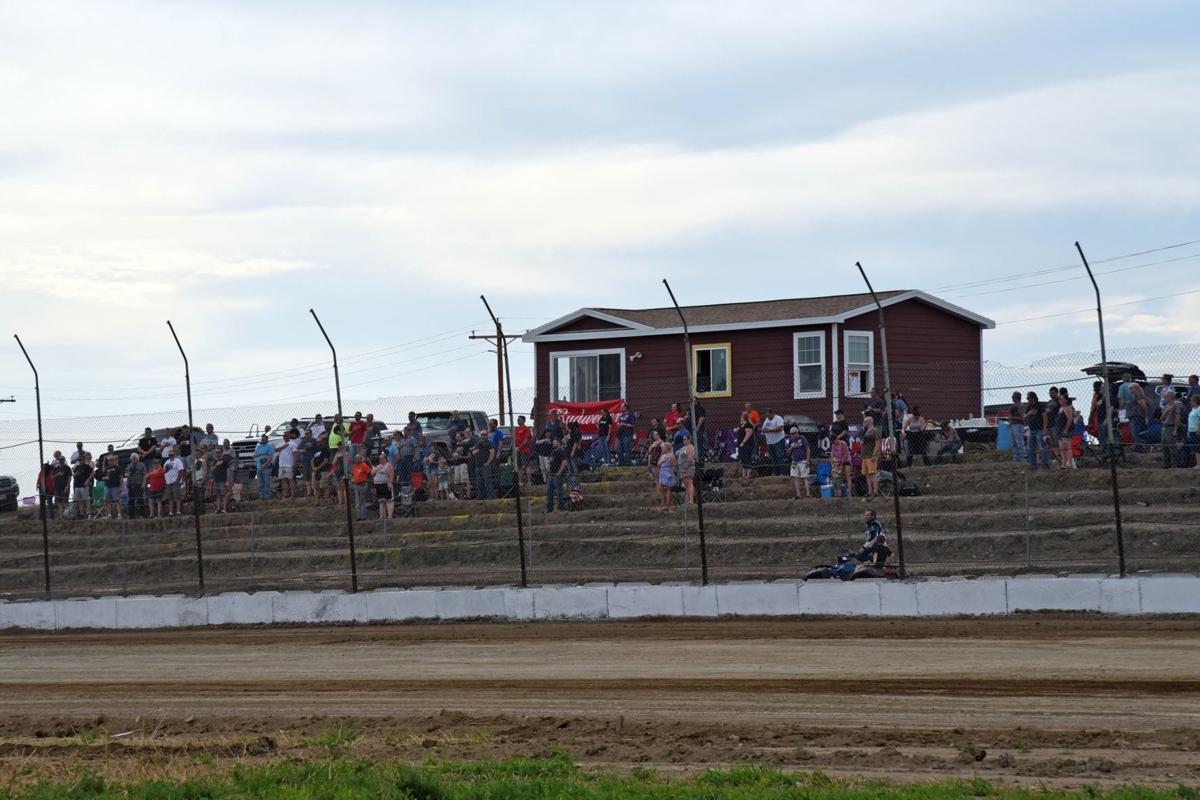 The early evening crowd begins to gather by the front stretch below concession stand at the opening night of the Bandit Speedway near Box Elder. 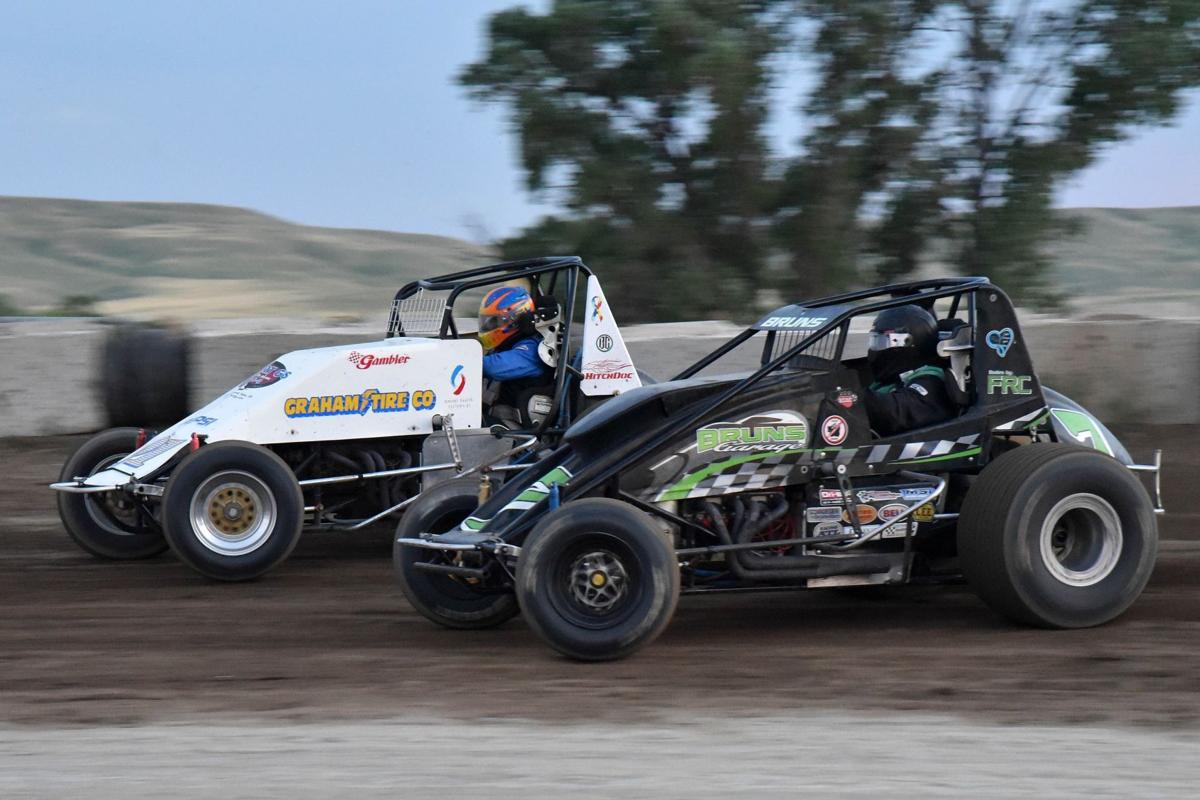 While many race tracks across the nation have shuttered among the motorsport landscape-some that hosted generations of racers and fans alike, a new playground of speed opened for business on a hot, windy Saturday night.

Bandit Speedway, a short drive from the outskirts of Box Elder, has been an in the making 3/8 mile oval for almost three years, according to builder/promoter Billy Keester.

“To have a track of my own has been a dream since I got out of the cockpit and into the promotion side of racing,” he said.

Keester's days as a racer began some 40 years ago, culminating with several sprint car season championships before veering into the promotional realm.

The city council of Box Elder has been supportive of the endeavor, as has nearby Ellsworth Air Force Base. The new track's name is in homage to the military base's mascot.

“We wanted to come up with a name recognizable to the local community, and as a way to say thanks," Keester said.

For at least the inaugural season, the track will be unsanctioned.

“One less hand to deal with for our first year,” Keester said. “This is like our test and tune year.”

With nervous enthusiasm, the decision to finally open the gates to South Dakota's latest speedway was made knowing there is much more to be done.

“It is a work in progress,” Keester said. “With all the rumors and questions, we had to show our hand.”

Perhaps the biggest question to Keester was the “if I build it, will they come” poser.

And in short, the answer was yes.

Despite scorching temperatures and a prevailing northern breeze, the response Saturday surprised both Keester and his assembled crew of volunteers.

“In my mind, it was the worst of both worlds — fans and no cars, or cars with no fans," he said. “The numbers weren't record setting, but I know I was beyond thrilled at all that came check out the new kid in town.”

Modified racer Justin Williams pulled over from Gillette, Wyo., to be among the first to test the new track.

“Even if they're like me and raced for years,” Williams said. “We're all rookies tonight.”

Keester's vision of a stripped down, back to the basics way of racing is the root of his business model.

“We built this track with one goal. To bring back the fun in racing, for both drivers and fans," he said

Tailgate parking was a must in the new entertainment venue. “We're a car and truck nation, especially here in the midwest. It's the ultimate go-together, like the drive in theater.”

For those opting for outdoor seating, a terraced section in front of the concession stand has room for many patrons that bring their own lawn chairs.

Many of the racers were curious about the new track, knowing well in advance of the unknowns they were to face.

“This is unproven territory,” Keester said. “There was so much we weren't going to know until the cars were hitting the dirt.”

Without a lighting system installed yet, racing activity must occur during daylight hours, always a problem for dirt track preparations. Steady sun, even a mild wind just drains the track of any moisture, Keester said.

As the program progressed to a near dusk conclusion, the dust plumes that haunted most of the activity magically dissipated.

“We knew it was going to be our biggest issue; we just didn't know the extent of it," Keester said.

Light poles and light fixtures have been purchased. However, cost of hooking up to the local electric utility comes with a steep cost not in this year's allowance. Their main goal is to be racing under the lights next year.

For the rest of the 2020 season, plans are to host races every Saturday night until Oct. 3.

“If we can't get a better handle on the dust problem, we'll have to adjust the schedule. We don't want anyone to get hurt," Keester said.

Obviously exhausted from the roller coaster ride of Saturday's opener, Keester is already formulating plans to tackle the dust problem. He said they are doing what they can with the budget hey have.

“Now that we have an idea of what it will and will not do," he said.

Even with the gratifying first show in the books, Keester is quick to add that there is much more to do. It's all the hundreds of little things that steal so much time.

"We want to make it a place that racers want to race and fans want to watch," he said. " “We've got our work cut out for us; we're listening while we're learning.”

A trio of recognizable drivers hoisted trophies for the first Bandit Speedway feature event wins. Glenn Puckett pulled his maroon-flavored Monte Carlo to his first even feature nod among the Street Stock set.

“I've been waiting for six years to be here,” Puckett said.

An amalgamation of what is referred to as “A” modifieds and “B” modifieds raced tightly throughout the night, with Corey Aga getting the win in his “A” mod, followed by two “B” mods of Williams and Ryan Featherstone.

Tom Sires captured the non-wing sprint car main event, a near regular occurrence when the class was part of the Black Hills Speedway lineup.

“It feels so good to have a home track again,” Sires said.

The open wheel class included a couple of visitors from afar: Clinton Bruns of Iowa and Rick Shuman of Arizona. Shuman's uncle is Ron Shuman, a veteran of the sprint car scene for many years.

Mike Pennel's speedway first may be memorable, but not one he could have wanted. In the closing laps of the sprint feature, he clipped the wall trying to secure a pass when he skirted the outside concrete barrier, thrusting his car into a series of flips.

Fortunately, the driver fared better than the car as he walked away under his own power.

Space Force commander fired after his comments on podcast

Space Force commander fired after his comments on podcast

Rick Shuman ducks under Mike Pennel in wingless sprint action on turn 3 Saturday at the Bandit Speedway near Box Elder.

Tom Sires rumbles out of turn two Saturday in the wingless sprint competition at the Bandit Speedway near Box Elder.

The early evening crowd begins to gather by the front stretch below concession stand at the opening night of the Bandit Speedway near Box Elder.