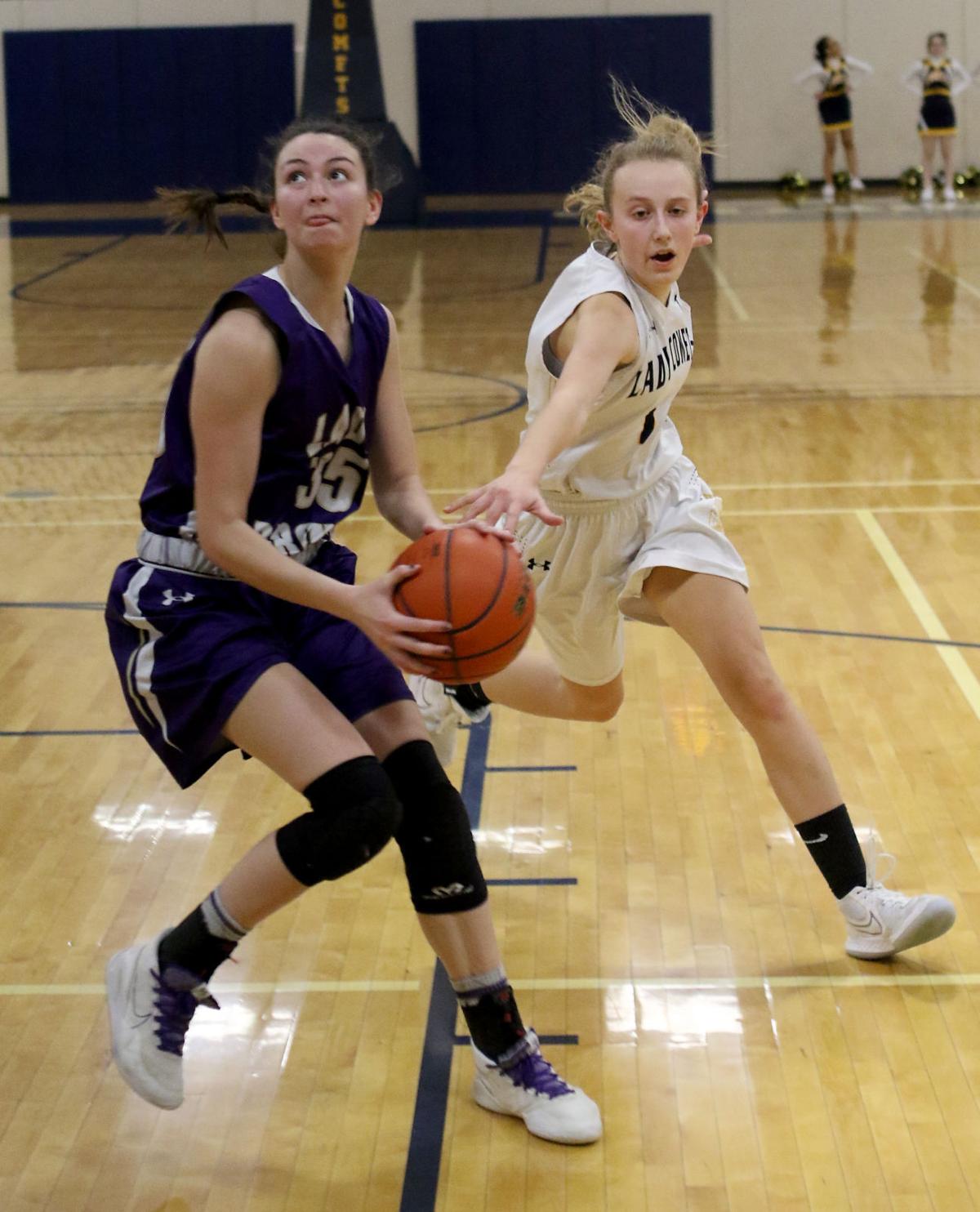 Belle Fourche senior guard Bella Jensen beats the Rapid City Christian defense to the basket for two points in the Broncs' win over the Comets at Hart Ranch Tuesday night. 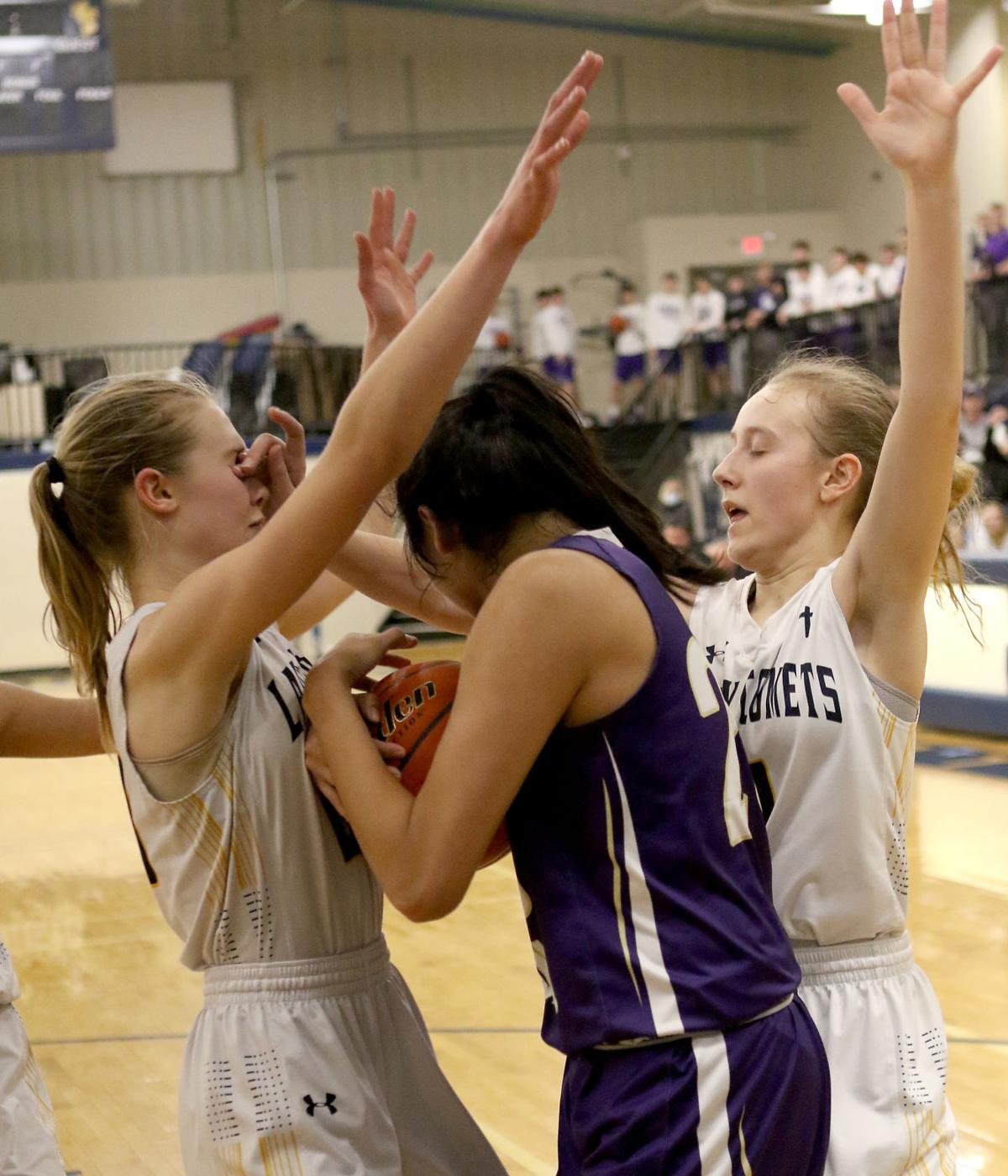 Comet sophomore Alexa Ham catches an unintentional slap to the face from Belle Fourche's Kaylin Garza as they and Morgan Swarthout battle for control of a loose ball Tuesday night. 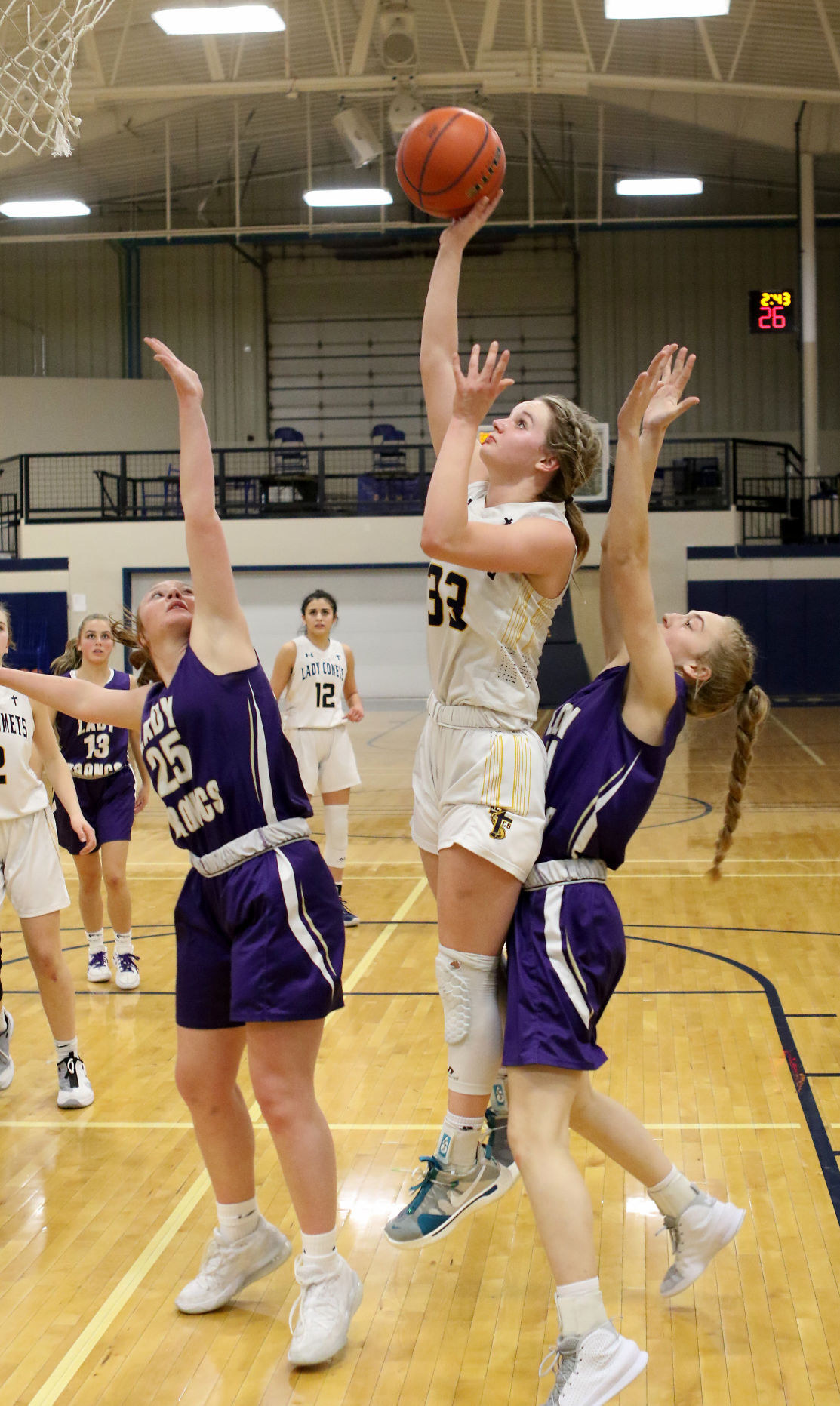 Rapid City Christian's Olivia Kieffer is fouled from behind on a jump shot by Belle Fourche freshman Mataya Ward.

Despite taking control at times the second half, it was a come-from-behind victory for the Belle Fourche girls' basketball team, as the Broncs picked up the road win against Rapid City Christian 65-56 Tuesday night at Hart Ranch.

The Broncs spotted the Lady Comets the first eight points of the game, and after Belle Fourche battled back to take the lead late in the first, Rapid City Christian was up by as much as 10 points in the second.

The second half, however, pretty much belonged to Belle Fourche as the Broncs led for much of the final two quarters.

"We were kind of slow getting out and recovering on the 3-point shot," Belle Fourche head coach Bill Burr said. "We make a run and were up two, and then we kind of relaxed a little bit, did some subbing and we didn't quite have the lineup that we wanted.

"But we closed it back down, and give the girls credit, they kept playing hard. The second half I thought we played really good defense, and we were patient and looked for some good shots, and we hit some big shots."

The Broncs took their first lead late in the opening quarter on a basket by Dylan Stedille, who led Belle Fourche with 18 points, 13 in the second half.

Rapid City Christian caught its second wind and took a 14-12 lead into the second when Alexa Ham took a feed from Olivia Kieffer.

The Lady Comets took that late momentum into the second and jumped out to a 24-14 lead on two 3-pointers by Kieffer and another by Abby Pierce.

But Belle Fourche once again made up the deficit with a 10-0 run with 3-pointers by Charlie Henwood and Bella Jensen.

The Broncs were the aggressor in the third taking a 42-33 lead with three minutes remaining in the quarter, but Christian came back with five points from Kieffer and a buzzer-beating 3-pointer by Pierce to cut the lead to 46-43 going into the fourth.

Belle Fourche continued to dominate the offensive boards and opened the fourth with three points by freshman Mataya Ward, a basket by Stedillie and a free throw by Kaylin Garza for a 52-43 lead with 5:50 to play.

After Rapid City Christian cut the lead to four (54-50), baskets by Tia Williamson, Ward and Chloe Crago seemingly put the Broncs comfortably back up by nine with just under a minute to play.

But a 3-pointer by Sarah Burkhalter and two free throws with just three seconds taken off the clock made it a four-point game again.

The Broncs held on by hitting 5-of-6 from the free-throw-line in the final 25 seconds.

"We were disappointed on how we played team defense, honestly," Rapid City Christian head coach Joe Kieffer said. "We had a couple of streaks where we were up, not comfortable, but decent leads. We just kept giving it up. Our defense, turnovers and rebounding — the same thing everybody works on every day. today it cost us."

Also hitting in double figures for the Broncs was Garza, who scored 10 points. Jensen and Ward added seven points each.

"We don't rely on one player, it's the whole team," Burr said. "I thought we had some great support off the bench tonight. We had some girls come in and contribute for us. I can't say say enough about Mataya Ward, she came in and had a big fourth quarter for us. It was a group win for us."

The Broncs got some big offensive rebounds, especially in the fourth quarter, and turned them into points.

"The girls rebound well. They box out well," Burr said. "This is a good ballclub (Rapid City Christian). They run the floor well and they shoot the ball well out front. We knew we had to box and rebound. We did a good job of it tonight."

Olivia Kieffer led all scorers with 20 points for the Lady Comets. Pierce had 12 points and Burkhalter added 11. The lady Comets hit 11 3-pointers to just six 2-pointers and all of their points came from their starting lineup.

"Very easily we might be playing Belle Fourche again in a little it," Joe Kieffer said. "I give them a lot of credit. They played 8-10 people and their coach did a good job of coaching them up. This game shows to us where we need to go playing half-court defense, and half-court rebounding. We work on it everyday but we're still a long ways to where we need to be."

Belle Fourche senior guard Bella Jensen beats the Rapid City Christian defense to the basket for two points in the Broncs' win over the Comets at Hart Ranch Tuesday night.

Comet sophomore Alexa Ham catches an unintentional slap to the face from Belle Fourche's Kaylin Garza as they and Morgan Swarthout battle for control of a loose ball Tuesday night.

Rapid City Christian's Olivia Kieffer is fouled from behind on a jump shot by Belle Fourche freshman Mataya Ward.