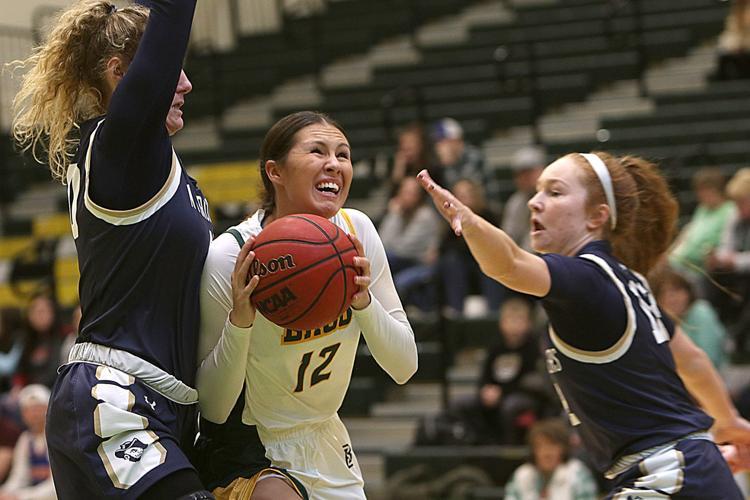 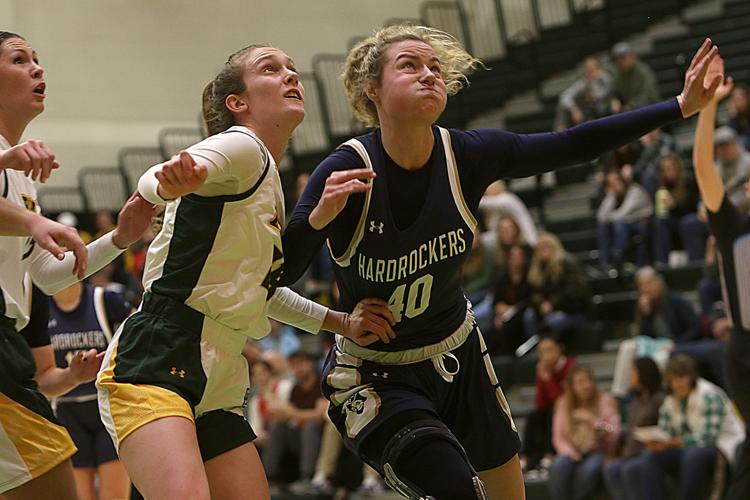 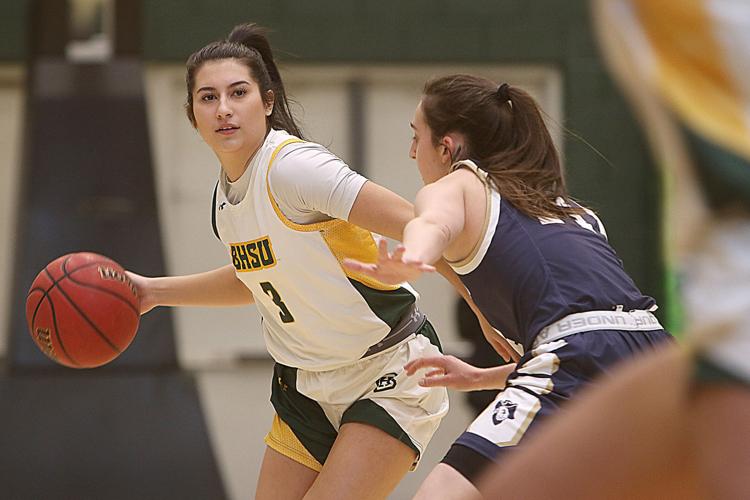 Black Hills State guard Raven Cournoyer (3) looks for a teammate to pass to during the Yellow Jackets' Rocky Mountain Athletic Conference game against South Dakota Mines on Thursday at the Donald E. Young Center in Spearfish. 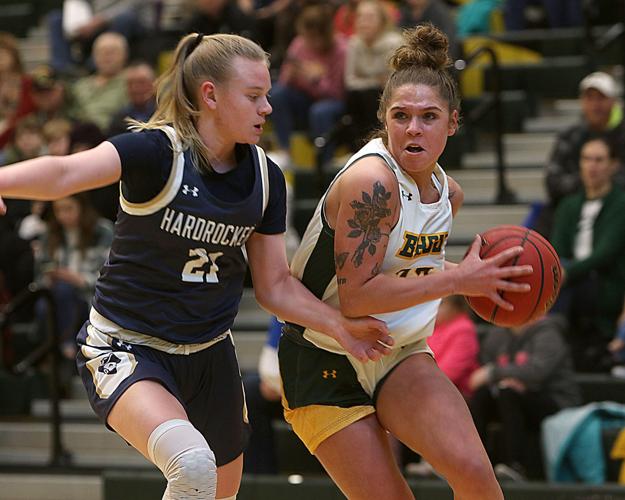 The Yellow Jackets roared out to a 41-15 halftime lead and then used a strong fourth quarter to down South Dakota Mines 69-55 in Rocky Mountain Athletic Conference play Thursday at the Donald E. Young Center in Spearfish.

Black Hills had a hot shooting hand over the opening quarter, using 9 of 15 shooting to build a 21-5 lead after 10 minutes of play. The Yellow Jackets built on their strong shooting by playing salty defense and forcing the Hardrockers into 15 first-half turnovers to take control of the game.

BH head coach Mark Nore threw a new wrinkle at Mines – starting the game in a zone defense – and he felt his team used its defensive energy to fuel its offense.

Down 26 points at the half, Mines head coach Jeri Jacobson gave her team an earful at halftime, and her Hardrockers took the message to heart.

“What's frustrating is, all week we talked about them shooting the three and how we needed to have our hands up and get great contests on threes,” Jacobson said. “We gave up way too many open threes in that first half. You can't do that up here.

“Some of our players were too amped and we'd break the press and we were just making quick rush decisions. Then, because I said slow it down, we started not being aggressive enough offensively.

“This team, they will battle. They'll never quit. I knew they'd come out ready to go in that third quarter and be a little more fired up to make sure that this game didn't get completely out of control on us.”

Mines used its defense to spark an offense that made just 6 of 23 field goal attempts in the first half. Guards Ryan Weiss and Bailey Johnson hit 3-pointers during an 18-5 scoring run, as the Hardrockers whittled the Yellow Jackets’ lead to 46-33 with 2:46 left in the third quarter.

Johnson’s second 3-pointer of the third quarter came with 12.6 seconds left and drew Mines within 50-36 lead into the final 10 minutes of the game.

“They responded from what we said in the locker room and came out and picked up our defensive intensity, which in turn led to stops,” Jacobson said. “Then we could come down and get some stuff going on.”

Danica Kocer gave Black Hills a needed lift to start the fourth quarter. Kocer, a junior guard who finished with 10 points, sandwiched two 3-pointers around a slick shot near the basket to up the Yellow Jackets’ lead back to 22 points two minutes into the fourth quarter.

Black Hills guard Ashley Davis, who finished with a team-high 21 points, and Haylee Weathersby played strong over the final 6-1/2 minutes to keep BH’s lead between around 15 points the rest of the way.

“Mines responded well,” Nore said. “And we did not play well. The third quarter I thought we just weren't in it. We stopped talking. Mines did a nice job. They stepped up, made some plays and some shots. We regrouped and we responded in the fourth quarter.”

Weiss scored 18 of her game-high 23 points and Johnson had all 10 of her points over the second half. Freshman Jansi Merz scored seven of her 11 points over the final 20 minutes.

Mines (1-14, 1-8 RMAC) returns to action Saturday when the Hardrockers travel to Chadron State, in Nebraska. Black Hills State (9-7, 7-3 RMAC) will host Colorado Mesa in a make-up game Monday at 4 p.m..

A 17-year-old died by suicide hours after being scammed. The FBI says he was targeted in 'sextortion' scheme.

Law enforcement calls the scam "sextortion," and investigators have seen an explosion in complaints from victims leading the FBI to ramp up a campaign to warn parents from coast to coast.

On Friday at approximately 11 a.m., officers from the Box Elder Police Department along with Deputies from the Pennington County Sheriff’s Off…

Black Hills State guard Raven Cournoyer (3) looks for a teammate to pass to during the Yellow Jackets' Rocky Mountain Athletic Conference game against South Dakota Mines on Thursday at the Donald E. Young Center in Spearfish.