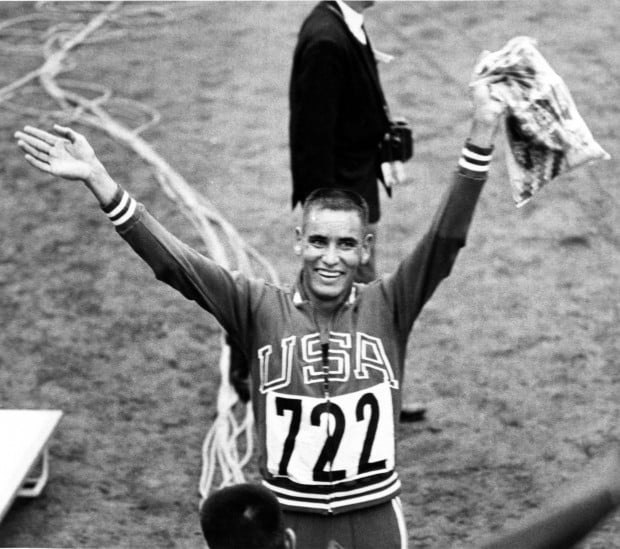 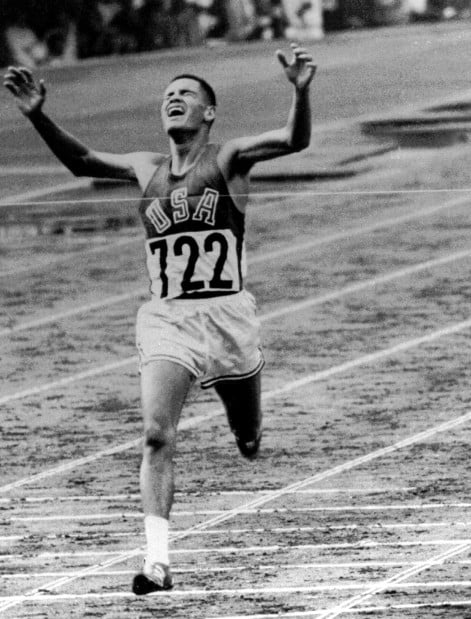 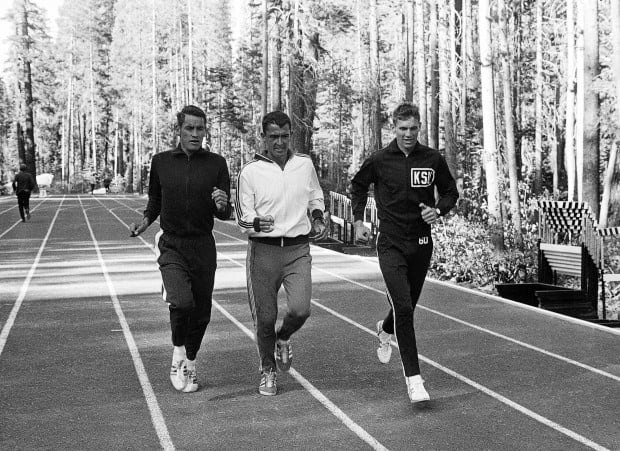 Ron Clark of Australia, center, works out on the United States Olympic team track in the mountain above South Lake Tahoe, California, Sept. 13, 1968. The altitude is more than 7,000 feet. Clarke, one of the world's distance stars, is allowed to work out on the track when the U.S. team is not officially using it. With him are American distance stars Billy Mills, left, Olympic 10,000-meter champ in 1964, and Conrad Nightengale. 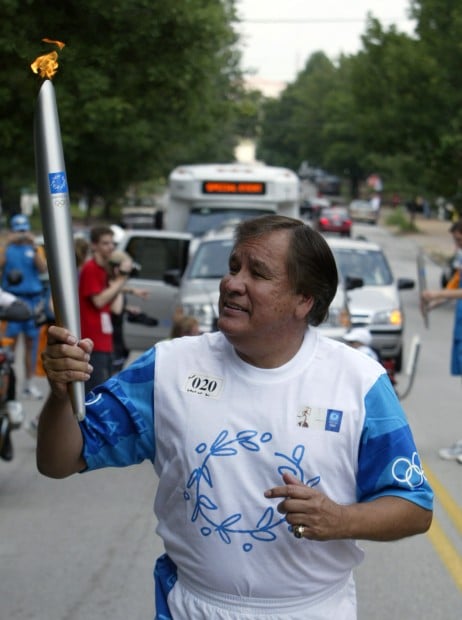 Former Olympian Billy Mills takes his turn carrying the flame during the Olympic torch relay in St. Louis in 2004. 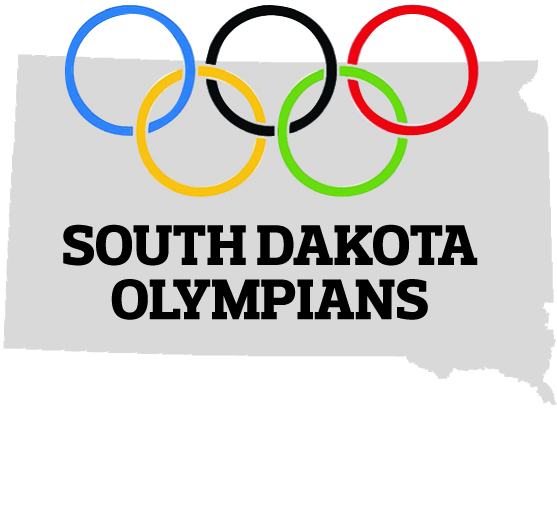 Logo to go with Olympic series.

Billy Mills’ journey has taken him a long way from the Pine Ridge Indian Reservation.

But the only man from the Western Hemisphere to ever win the Olympic 10,000 meters is still very much a product of his home and that home still feels his impact to this day.

“He’s an icon down here,” Kevin Poor Bear said. “He’s almost like Jesus to people here. He’s the person I looked up to the most growing up and the person who made the biggest impact on me. I think he’s the greatest Oglala since Crazy Horse.”

That Mills, considered to be one of the greatest underdog winners of an Olympic event in history, comes from one of the most underdog places in the country, seems to fit. And while the 1964 Olympic champ has fond memories every time the Olympic Games come around, he says the journey and the relationships that have sprouted out of it are most important to him.

“I get most excited to see all of the friends that I made over the years,” Mills said. “To see people who shared my journey and whose journey I shared is the most important thing. Then, I’m most excited looking forward to what the young athletes can do.”

Mills and his wife, Pat, will be attending the 2012 Games in London, his ninth Summer Games and 12th overall. He says that he is quite excited to see world-record holding decathlete Ashton Eaton go for the gold on the 100th anniversary of one of Mills’ own heroes, Jim Thorpe, winning the gold in the event.

Mills said that growing up he looked up to two Native American decathletes — Thorpe and South Dakotan Buster Charles — the most.

“Jim was more like a god,” Mills said with a laugh. “I could try to be a good athlete, but I could never think that I was going to be like Jim Thorpe. To me he is still the greatest athlete who has ever lived, but I did also have my favorite athlete, who was Buster Charles. He was one of South Dakota’s greatest athletes.”

Mills long dreamed of becoming an Olympian, first becoming aware of the concept soon after his mother died.

“My father had brought home some literature from some Jesuits at Holy Rosary, what is now Red Cloud, and it had an article about how Olympians were next to gods,” Mills said. “It was naive on my part, but as a young boy I thought that if one day I could become an Olympian and get next to the gods that maybe I could see my mother again.”

Mills suffered another terrible loss when he was 12 and his father died, but not before he made a huge impact on his young son’s life.

“We were out fishing one day on the reservation and he was massaging my shoulders, kind of rubbing my back, and he told me that I had broken wings,” Mills said. “And he told me that he would share some things with me and that if I followed them, some day I would have the wings of an eagle. He told me to look through the hurt, the hate, the jealousy, the self pity. He said that I had hate inside because I had just lost my mother and because people had expressed hate toward us. He said I had jealousy because we don’t have anything of material value. But he said that blinded me because I couldn’t see the good in other people and other cultures, or even our own culture. And he said that those things would destroy you.”

That was when Mills said his father gave him his greatest advice and something he would remember for the rest of his life.

“He told me that I had to look way down deep to where your dreams lie,” Mills said. “He told me to find my dream and follow it and that it is the pursuit of the dream that heals you. Follow your dream, son.”

Mills followed that dream all the way to Haskell, Kan., and later the University of Kansas, where he had an all-American cross country and track career.

While he was in high school, his coach helped him to realize that his early Olympic aspirations were well within his reach. Mills struggled with a lack of energy at times, leading to some inconsistency in his results. After joining the Marine Corps, Mills was diagnosed as hypoglycemic, leading to drops in his blood sugar levels. He suffered one of these drops on the final lap of his winning 10,000-meter Olympic run.

“I could tell it was happening, so I let (the lead runners) get a few yards in front of me so that I could rest a little before one last charge,” Mills said.

Later, Mohammed Gammoudi would tell Mills that he looked like an arrow being shot out of a bow on the homestretch.

Mills said the wings his father promised he would develop carried him across the finish line.

“I knew that I could win the race at that moment, that I was close enough to reach my dreams,” Mills said. “As I passed a lapped runner, I looked over and saw an eagle on his shirt out of the corner of my eye. I could hear my father talking about the wings of an eagle and it truly felt like they were carrying me to the finish.”

Mills later sought out the lapped runner to look at his singlet, but there was no eagle to be found.

The win reverberated around the world, and in no place more than Pine Ridge.

“I don’t remember the actual race all that much, but I remember him coming back after he won the gold medal,” Pine Ridge resident Reggie Rowland said. “That was big for the whole area, for the whole tribe when he did that. To see that happen, to see one of our own do that, gave hope to a lot of people.”

Mills went on to set world records and finish his commitment to the Marines before moving onto a successful career as an insurance salesman and motivational speaker.

Mills continues to return to Pine Ridge at least every couple of months, as he will Wednesday on his way to London. He says he hopes to see more youth on the reservation take his own father’s advice.

“Find your dreams,” Mills advises. “Mine was sports, but no matter what it is — student government, public speaking, acting, music — find a dream and chase it.”

Billy Mills by the numbers

Ron Clark of Australia, center, works out on the United States Olympic team track in the mountain above South Lake Tahoe, California, Sept. 13, 1968. The altitude is more than 7,000 feet. Clarke, one of the world's distance stars, is allowed to work out on the track when the U.S. team is not officially using it. With him are American distance stars Billy Mills, left, Olympic 10,000-meter champ in 1964, and Conrad Nightengale.

Former Olympian Billy Mills takes his turn carrying the flame during the Olympic torch relay in St. Louis in 2004.

Logo to go with Olympic series. 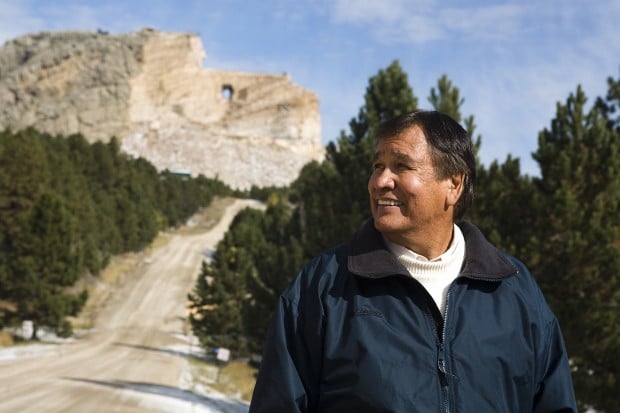 Billy Mills is the only man from the Western Hemisphere to ever win the Olympic 10,000 meters.