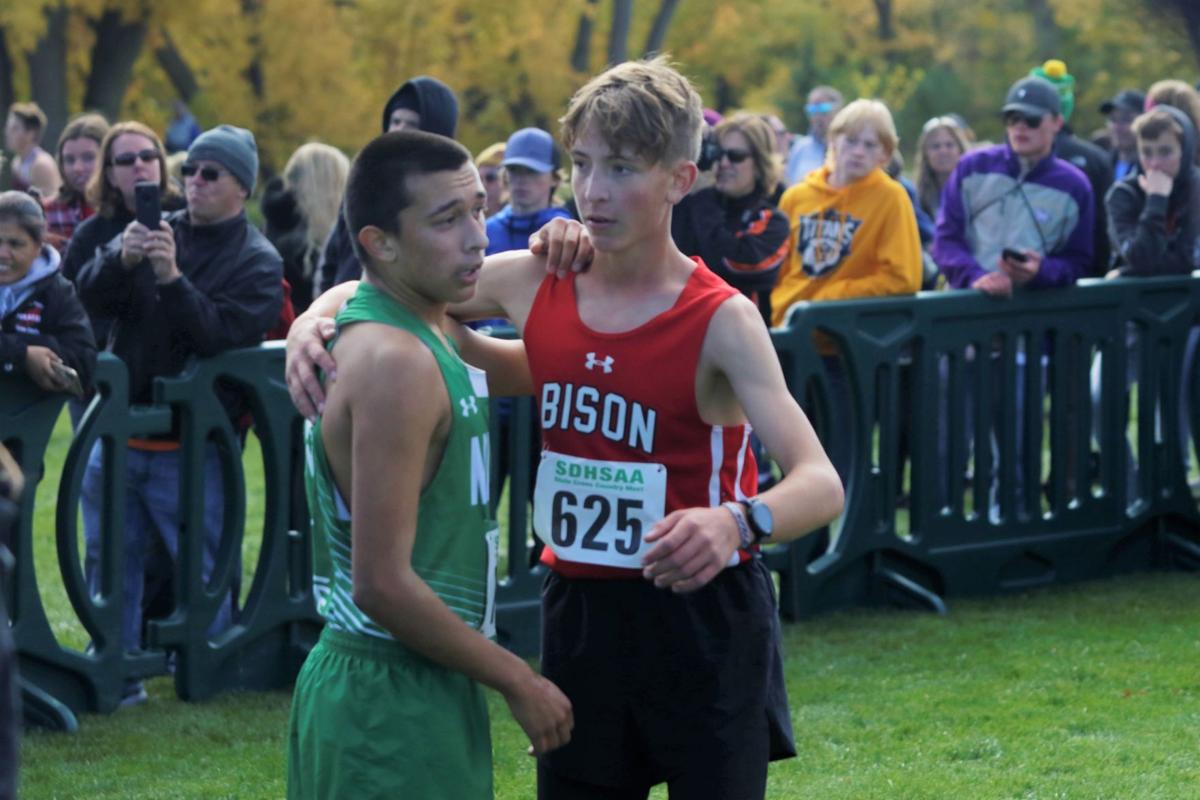 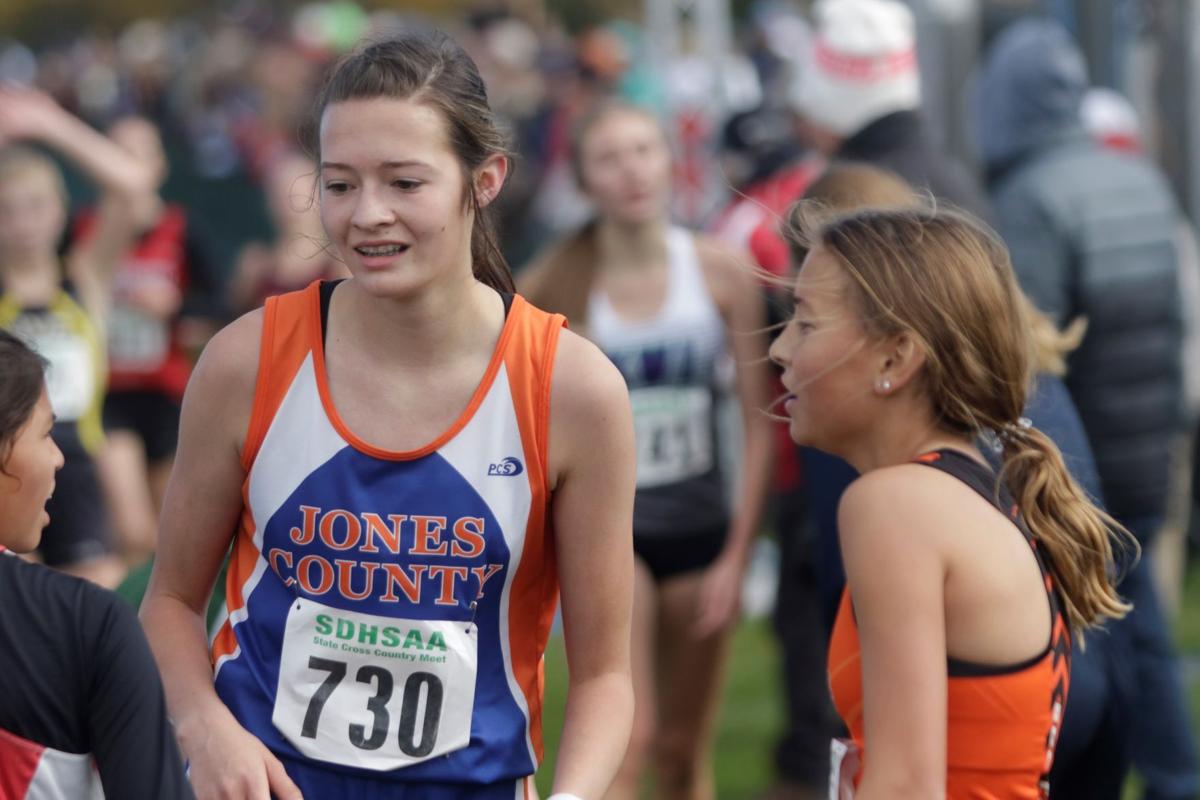 Jolie Dugan of Jones County, center, and Presley Terkildsen of Philip talk to another runner after finishing the Class B State Cross Country Championship Saturday at Yankton Trail Park in Sioux Falls. Terkildsen finished ninth and Dugan was 12th.

Before the State Cross Country Championships, Bison head coach Brad Burkhalter said that Lane Krautschun was the best runner in Class B, even though he had the second best time going in.

He was right and Krautschun is the best runner in Class B, as he won the 5k title Saturday at Yankton Trail Park.

Krautschun basically had an easy time of it, although he said he didn’t feel that great, as he won the race in 16 minutes, 35.82 seconds, 18 seconds ahead of second-place finisher Josiah Schroeder of Canistota. Pierce Baumberger of Miller was third in 16:58.52, followed by Alex Schumacher of Miler in fourth, Nicholas Schlachter of Potter County in 17:17.21 and Garrett Winkler of Newell in sixth place in 17:18.63.

“It feels pretty great,” Krautschun said. “Since track season was over, I have had my eye on this. It feels good to get it.”

Last season as a freshman, Krautschun finished in third place, with teammate Jonathan Burkhalter one place ahead of him. That was a confidence booster, he said, going into this season.

“Obviously Jon is not here, he graduated, so it has been different not having him here. I think it has been good,” he said.

Brad Burkhalter said Krautschun’s strategy was to just run with the leaders early on, at least through the first mile, and he did a perfect job of that.

“He hung in there. He didn’t feel all that great, but he ran hard and pushed through the second and third mile and got some distance on them. He just looked really good to me,” he said.

After that first mile when Krautschun took the lead, he just wanted to make sure he stayed in the lead.

“I wasn’t trying to go out too fast, but just keep it in control and see what everybody else was doing. I just went with it, when I felt good,” he said. “Then I was just running for my life. I was scared that they were going to catch me, so I was just going for it.”

Krautschun felt better about his chances once he got a comfortable lead with a little eye contact with his coach.

“Before the loopteeloop by the tree, my coach was right there and I signaled to him, ‘Am I good? Am I good?’ He was giving me the OK,” he said.

The Bison program, which won the state team title behind Jonathan Burkhalter and Krautschun, is beginning to establish a strong reputation of quality runners with Daniel Burhalter winning a title a few years ago.

“Both Dan and Jon were a huge inspiration to me and big role models, so to do what Dan did — Jon didn’t quite get it done — but what they did was really, really cool,” Krautschun said.

Brad Burkhalter said it is a big step for their program for somebody other than a Burkhalter to have success.

“It is really good. We have some work to do with some of our younger kids, but they have seen him win, they see him in practice every day. They know what it takes to get to that point,” he said. “Hopefully they can plug in and buy into the program and put some miles in during the off-season and come back next year and put their good foot forward and do well.”

Krautschun, meanwhile has two more years of high school to build on his early success.

“This is a good starting point, that is what it is,” Krautschun said. “I just have to work hard.”

Miller ran away from the field with 25 points (only three in team scoring), followed by Northwestern with 48 points and Freeman Academy/Marion with 51. Philip finished a strong fourth with 56 points and Kimball/White Lake was fifth with 58 points.

The Class B girls’ team race was the closest of the three classifications, as Kimball/While Lake edged Potter County 26-29 for the title. Aberdeen Christian was third with 44 points, followed by Ipswich with 45 and Arlington with 63. Northwestern rounded out the top six with 75 points

Individually, Elle Boekelhide of Northwestern won the race in19:39.44, followed closely by Autumn Baker of Kimball/White Lake in 19:41.58. Kaelyn Ulschmid of Arlington was third, with Jada Koerner of Freeman Academy was fourth and Autumn Falls of Highmore Harrod in fifth.

Jolie Dugan of Jones County, center, and Presley Terkildsen of Philip talk to another runner after finishing the Class B State Cross Country Championship Saturday at Yankton Trail Park in Sioux Falls. Terkildsen finished ninth and Dugan was 12th.