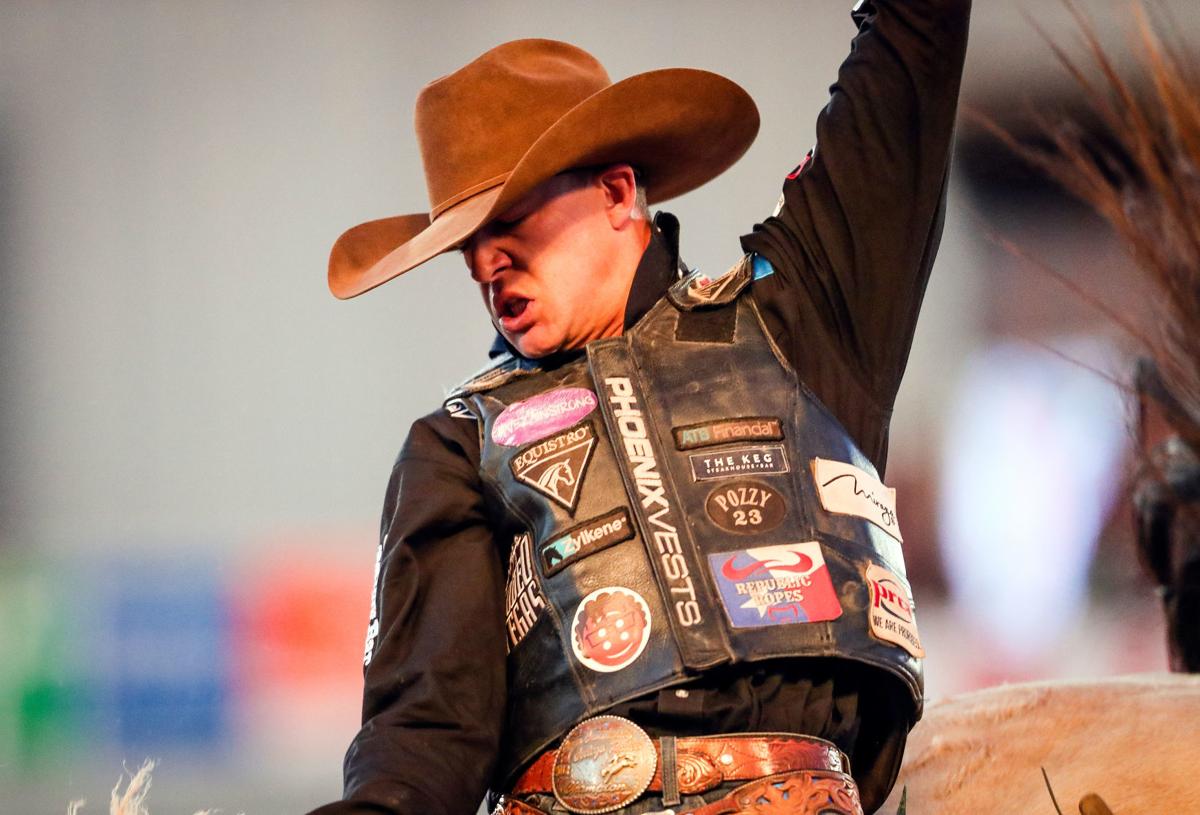 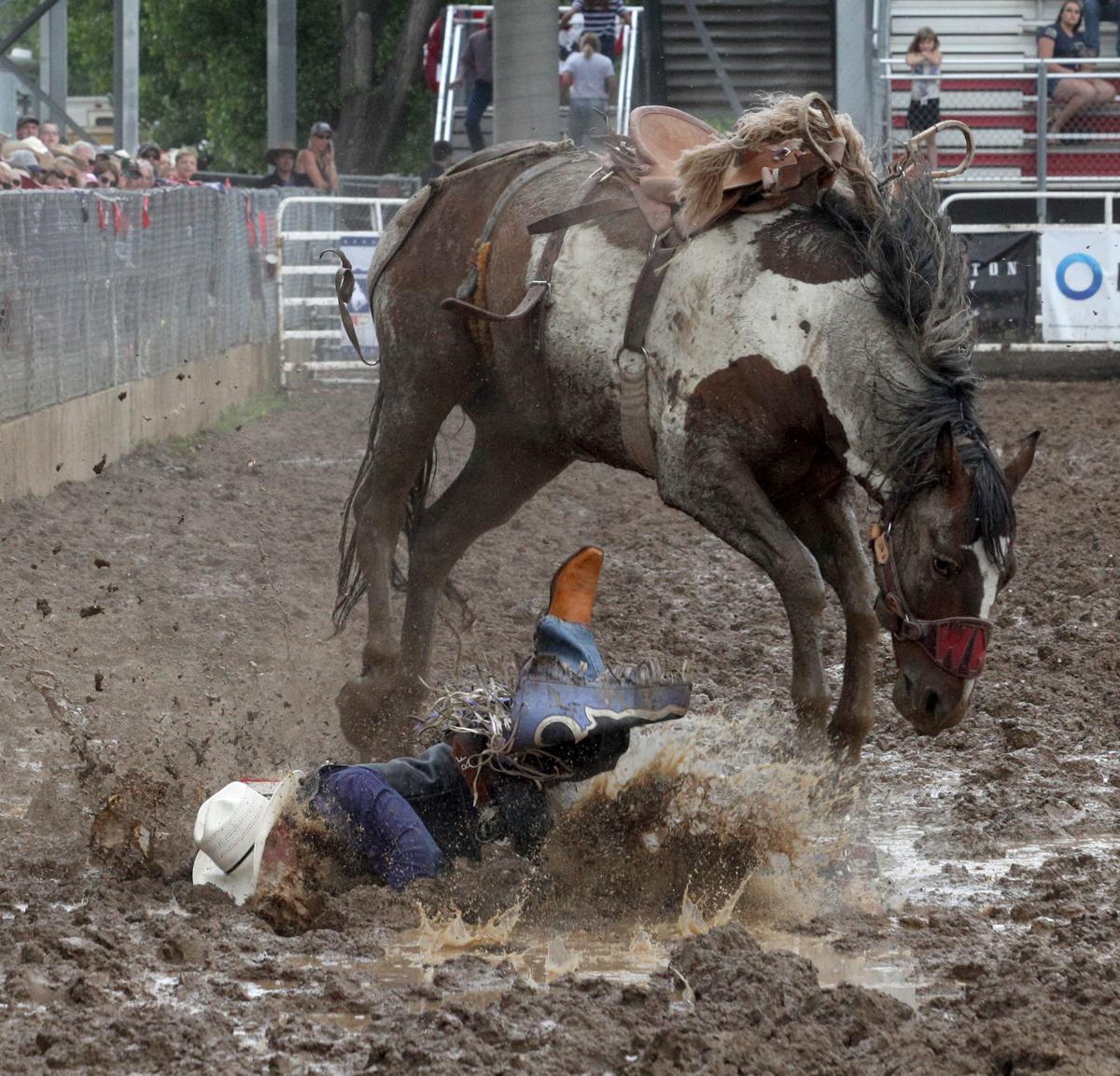 Rhett Fanning from Martin is thrown from his saddle bronc mount by Ramble On during the 100th Annual Black Hills Roundup Rodeo in 2019.

The historic Black Hills Roundup Rodeo, a Fourth of July celebration unlike no other, topped off 100 years of premier rodeo and community celebration with a centennial edition last year.

That there would be a 101st edition was in doubt a couple of months back as sporting events were put on hold due to the sudden arrival of the coronavirus pandemic.

Fortunately, for the Belle Fouche community, and a whole lot of rodeo participants, the 101st edition of the Roundup will kick off on Wednesday with at the Belle Fourche Roundup Rodeo grounds.

“There was definitely some doubt as to whether we would be able to make it happen this year,” said Keith Anderson, Chairman of the Roundup Rodeo Board. “About six weeks ago we had a meeting, and with things getting a little more lax with restrictions, we decided that if we were going to do it. We had to commit then or we wouldn’t have enough time to do it.”

With the commitment made, the board and the Belle Fourche community stepped up in short order to make it happen.

“Absolutely, there were a lot of extra protocols and a lot of extra work that went into it this year,” Anderson said. “It was a little overwhelming at first, but then we sat down and visited with the mayor and implemented some of the city’s protocols as far as cleaning and sanitizing everything.”

“We will have people walking through the stands during the performances and disinfecting the handrails and other things, and we will have five or six food trucks rather than one so that people aren’t congregating in those areas,” Anderson said.

While Covid-19 has necessitated some changes in this year’s Roundup Rodeo, one aspect will remain unchanged: quality rodeo featuring the very best professional rodeo athletes in the world.

And a bunch more than in the past.

South Dakota ladies will challenge as well, led by defending barrel racing champion and two-time NFR qualifier, Jessica Routier of Buffalo, and a host of area competitors in both barrels and breakaway roping, a new event added this year. Among them, a trio of sister combinations — Rickie and Taylor Engesser, Shayla and Brooke Howell and Carlee and Savana Johnston, all former state high school champions.

And while ticket sales are down somewhat from previous years, Anderson is optimistic that people will respond to what has been a cherished Belle Fourche tradition dating back to 1918.

“We are hoping that people will decide to walk up and buy tickets. I think that will happen since everybody around here is excited that the rodeo is on this year,” Anderson said while pointing out that the Black Hills Roundup is a community celebration.

“The parade will go on as will the carnival though it will be cut back a little bit to make room for social distancing," Anderson said. "But, yes, we are very much on track for what we have had in previous years.”

The PRCA rodeo portion of the Black Hills Roundup kicks off Wednesday with the first performance scheduled for 7 p.m. The second and third performances are scheduled for Thursday and Friday at 7 p.m. as well while the fourth and final performance slated for 3 p.m. on the Fourth of July.

The complete Black Hills Roundup event schedule can be sourced at blackhillsroundup.com.

This is the third update of coverage that precedes President Trump's visit to the Black Hills and tonight's fireworks show at Mount Rushmore.

This is the second update of coverage that precedes President Trump's visit to the Black Hills and tonight's fireworks show at Mount Rushmore.

The woman approached the bison to take a picture and got within 10 feet of it multiple times before it gored her on June 25, according to a news release from the park.

Rhett Fanning from Martin is thrown from his saddle bronc mount by Ramble On during the 100th Annual Black Hills Roundup Rodeo in 2019.