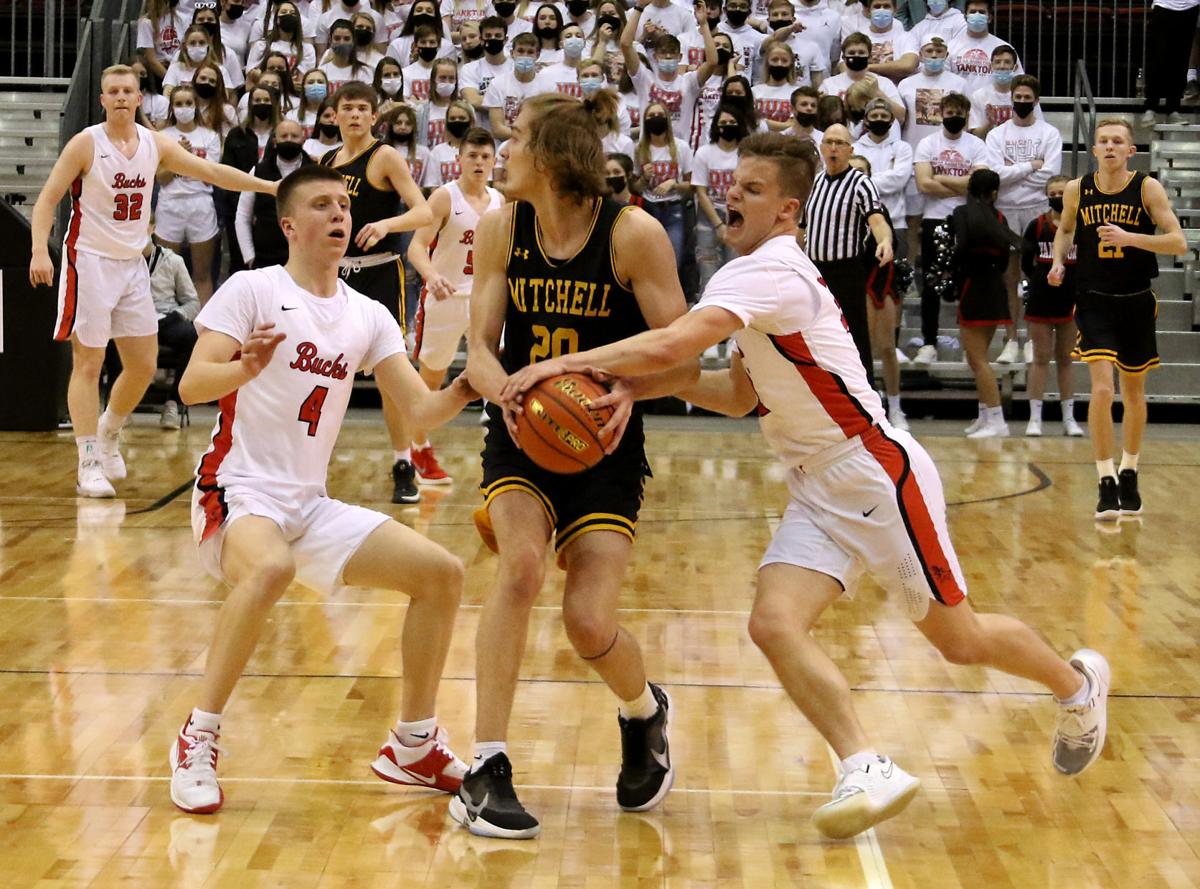 Caden Hinker is stripped of the ball by Yankton's Trevor Fitzgerald on the Bucks press in the first half of Yankton's 50-46 win over Mitchell in the first round of the AA State Tournament Thursday. 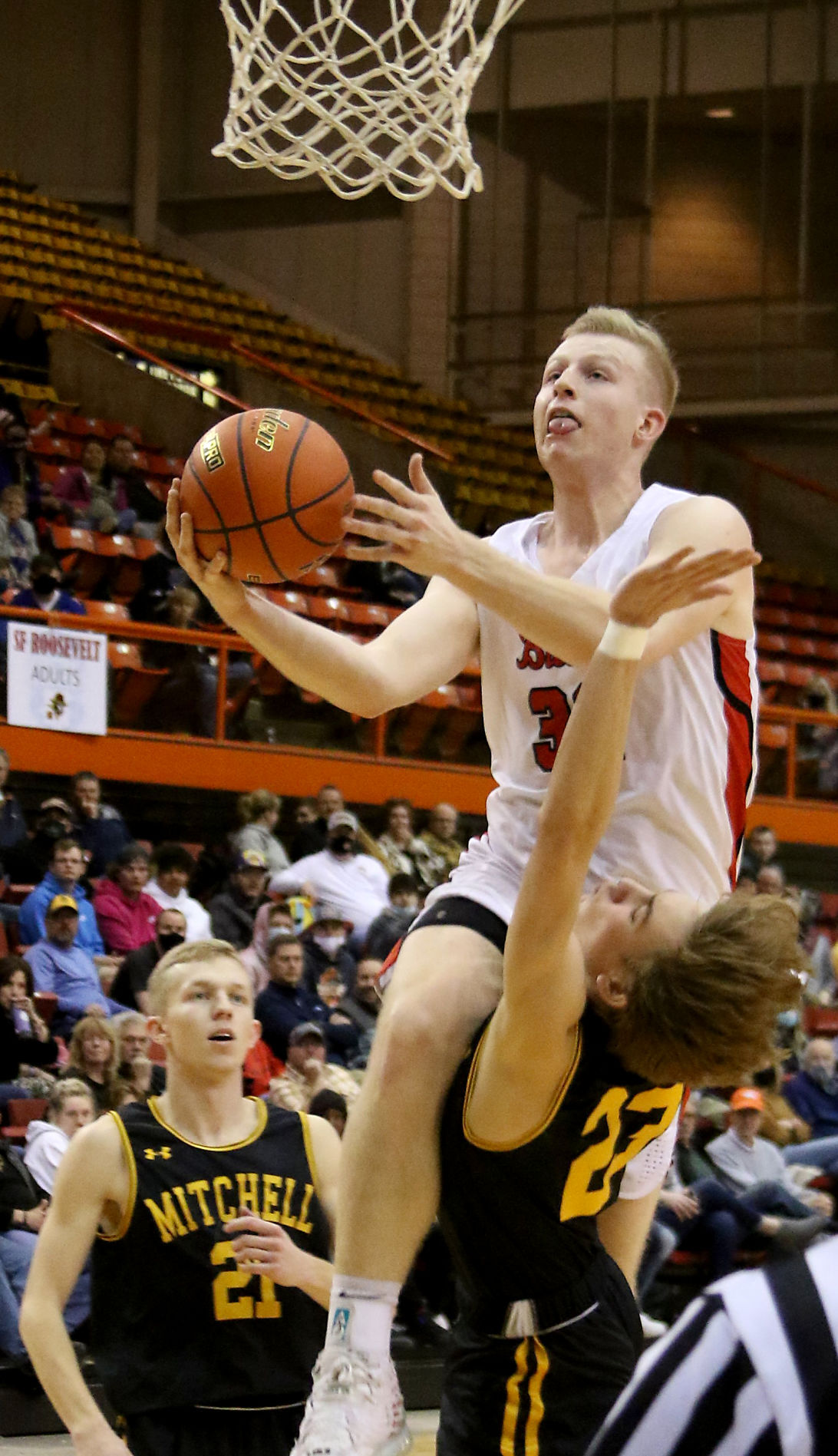 Yankton's Matthew Mors gets the call and the bucket as Mitchell sophomore Dylan Soulek is called for blocking. Mors led the No. 2 Bucks to a first round win over the Kernels.

With no field goals and just one point in the first quarter, the No. 2 Yankton Bucks finally warmed up — just enough — to rally past No. 7 Mitchell 50-46 Thursday night in the first round of the Class AA Boys State Basketball Tournament a Barnett Arena.

Somebody had to step up and hit some shots, and senior Wisconsin commit Matthew Mors helped get the Bucks back in the game after trailing 12-1 at the end of one. But it was guard Dylan Prouty who got Yankton, 19-3, over the hump and eventually into the semifinals Friday night against Sioux Falls Roosevelt at 7:30 p.m.

Prouty hit 7-of-10 from the field — all 3-pointers — scoring a game-high 25 points. Yankton coach Chris Haynes said Prouty has shot the ball well all year  and he did again Thursday night.

Prouty, who hit 3-of-4 3-pointers in the first half, knocked down three straight 3s midway through the third, putting the Bucks up 35-29, and Yankton would take a four-point edge in the fourth.

Leading by five, Prouty hit his seventh 3 with five minutes to play, but it was far from over. Caden Hinker came right back for the Kernels with a trey and Zane Alm's short jumper made it a 40-37 game with 3:45 remaining.

Mors then picked up his fourth foul, but he stayed in the game, drawing a charge on Hinker, his fifth, with 3:23 to play.

Haynes said Mors drawing the charge was the play of the game.

"That's a senior stepping up and making a play," he said. "He has four fouls, Hinker has four fouls. He stepped up, it was clear, and no doubt, he took the charge. It was a great play. You can say all you want about all of the big plays Matthew has scored on, that is one of the best plays he has ever made."

The Kernels remained on the Bucks' heels and kept it a three-point game on a basket by Alm, but a Mors' turnaround jumper behind the free-throw line put Yankton up 46-41, only to see Jaden Kral hit two free throws a few seconds later.

Mors missed the front end on the line with 32 seconds remaining, but the Bucks got a steal and time out to keep possession. Prouty then hit four free throws in the final 28 seconds to seal the win. Gavyn Degen connected on a long 3-pointer at the buzzer for Mitchell to close the scoring.

"Every game we play, we know Matthew's going to get a lot of the attention, which opens up stuff for us other guys," Prouty said.

"When he got his fourth foul going to the basket, we told him that 'hey, you might have to hit a couple of pull-ups here,'" Haynes said of Mors. "He did a great job of attacking tonight, and it is not easy to score on those guys, Alm and Hinker, they are great around the basket."

Although his team struggled offensively, Haynes said its defense kept the Bucks in the game.

"Even though we only had one point in the first quarter, we were still in it. We were down a dozen points or whatever it was, we were still in it and were able to make some shots in the second quarter, get in our press and get the momentum going our way," he said. "We couldn't do that without our defense. It wasn't the prettiest game, that's for sure, but we had to make it that way. Our guys did a great job, great effort. This time of year, you just have to survive and advance."

The Kernels couldn't have asked for a better start, leading 12-1 at the end of the first quarter. Yankton didn't get its first field goal until the 6:42 mark of the second quarter on a three-point play by Rugby Ryken. The Bucks took their first lead at 23-20 on a late three-point play by Mors and led by one point at halftime.

Mitchell coach Todd Neuendorf said Yankton was able to come back in the second quarter because his two leading scorers, Hinker and Alm, were on the bench in foul trouble.

“When your two leading scorers are sitting on the bench, that allows a team to come back. With Hinker and Alm sitting, that got them back in the mix," he said.

“I don’t mean to sound like sour grapes, but you can’t have your one and two leading scorers sitting on the bench," Neuendorf said. "If we are going to do that, let’s do that on the other side too to see how the game turns out. We had a 14-point lead, we went according to script. The guys did what we wanted. But the script got ripped in the second quarter and you just have to battle through. “

SIOUX FALLS O'GORMAN 58, HARRISBURG 39: The Knights remained hot and moved on to the semifinals with the big win over the Tigers.

Sioux Falls O'Gorman won its 10th straight game and dominated from the start, up 15-4 at the end of the first quarter and 29-11 at halftime.

Harrisburg chipped away some in the third, cutting the lead to 11, but O'Gorman never let the Tigers back in the game and pulled away again in the fourth.

Kade Moffit led a balanced O'Gorman attack with 14 points and Joe Lynch, who was 6-of-6 from the field, added 13 points. The Knights shot 55 percent from the field, and a hot 7-of-14 from 3-point land.

O'Gorman, 16-6, takes on rival Sioux Falls Washington Friday night at 5 p.m. in one semifinal game, while Harrisburg, 16-6, takes on Aberdeen Central at noon in the consolation round.

SIOUX FALLS ROOSEVELT 64, BRANDON VALLEY 47: The third-seed Rough Riders pulled away in the final minutes to advance to a semifinal matchup with No. 2 Yankton.

Roosevelt led most of the way and was up by double-digits late, but saw the Lynx scrap back and cut the lead to four points with four minutes remaining.

That woke the Rough Riders up and they closed by scoring the game's final 13 points for the lop-sided win.

Class B In Aberdeen

Class A In Sioux Falls

Caden Hinker is stripped of the ball by Yankton's Trevor Fitzgerald on the Bucks press in the first half of Yankton's 50-46 win over Mitchell in the first round of the AA State Tournament Thursday.

Yankton's Matthew Mors gets the call and the bucket as Mitchell sophomore Dylan Soulek is called for blocking. Mors led the No. 2 Bucks to a first round win over the Kernels.