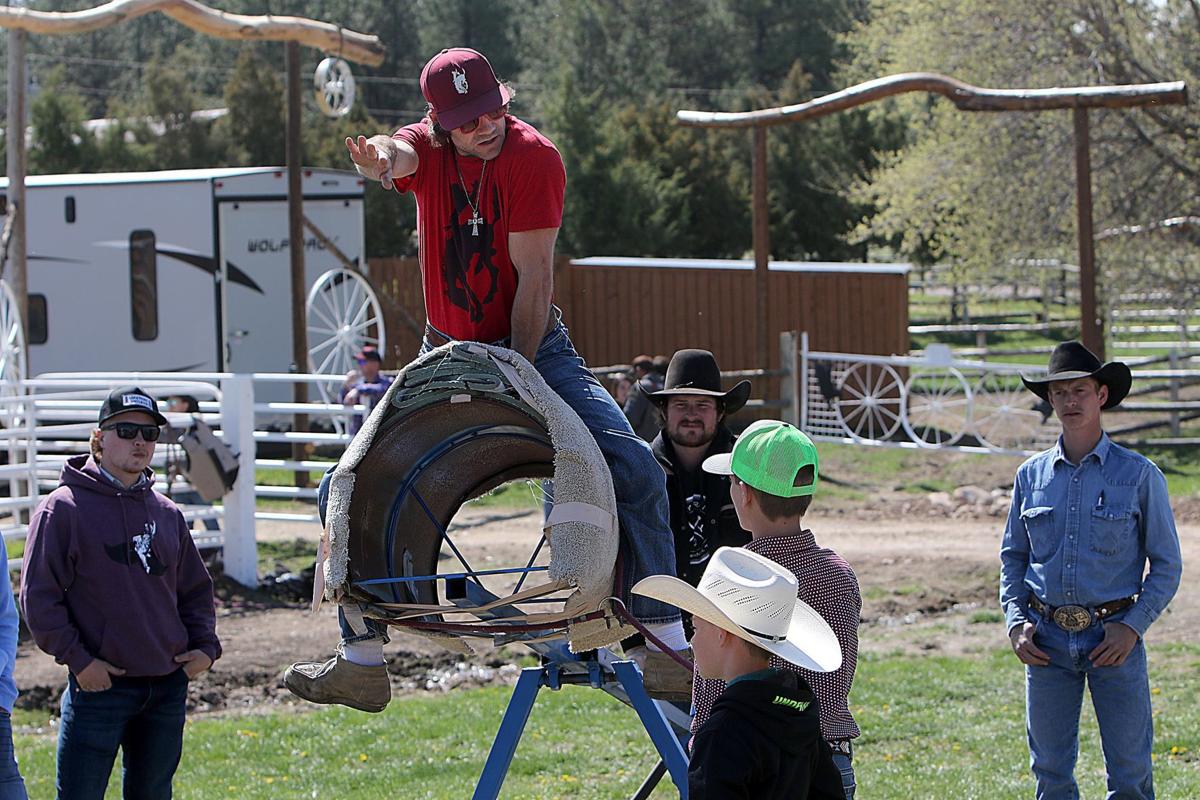 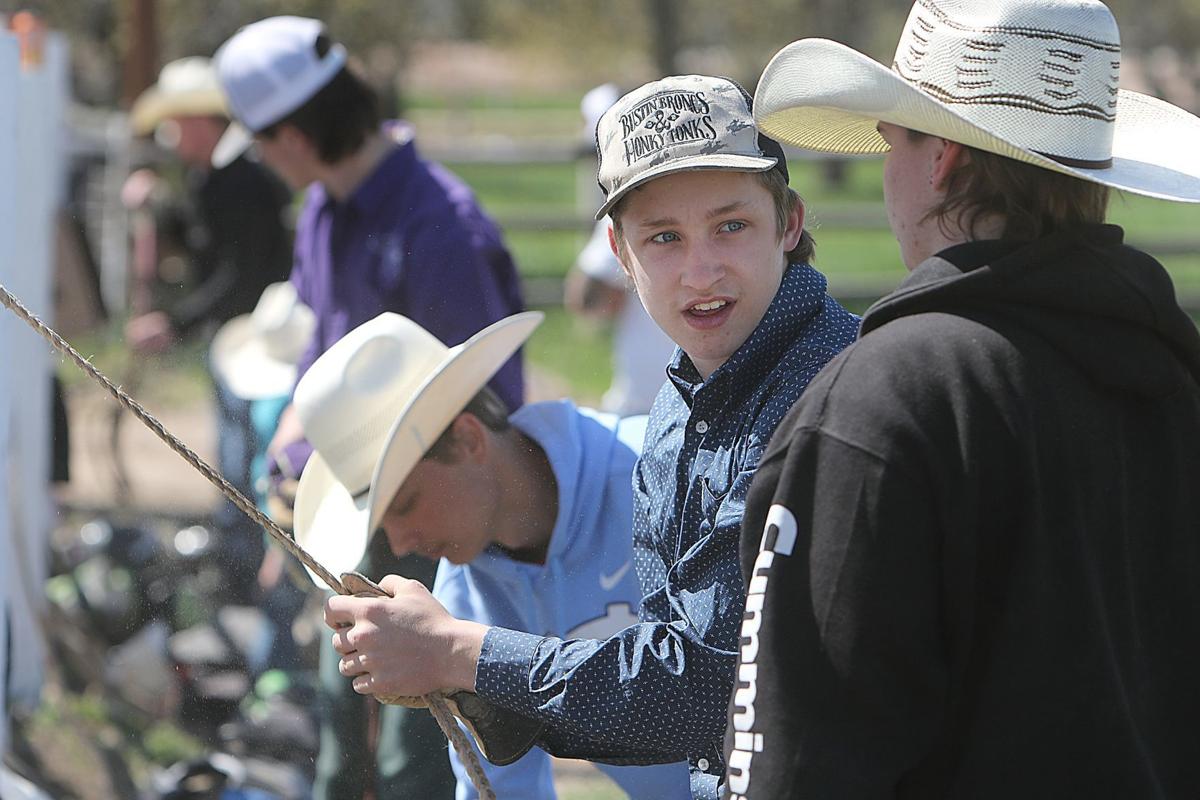 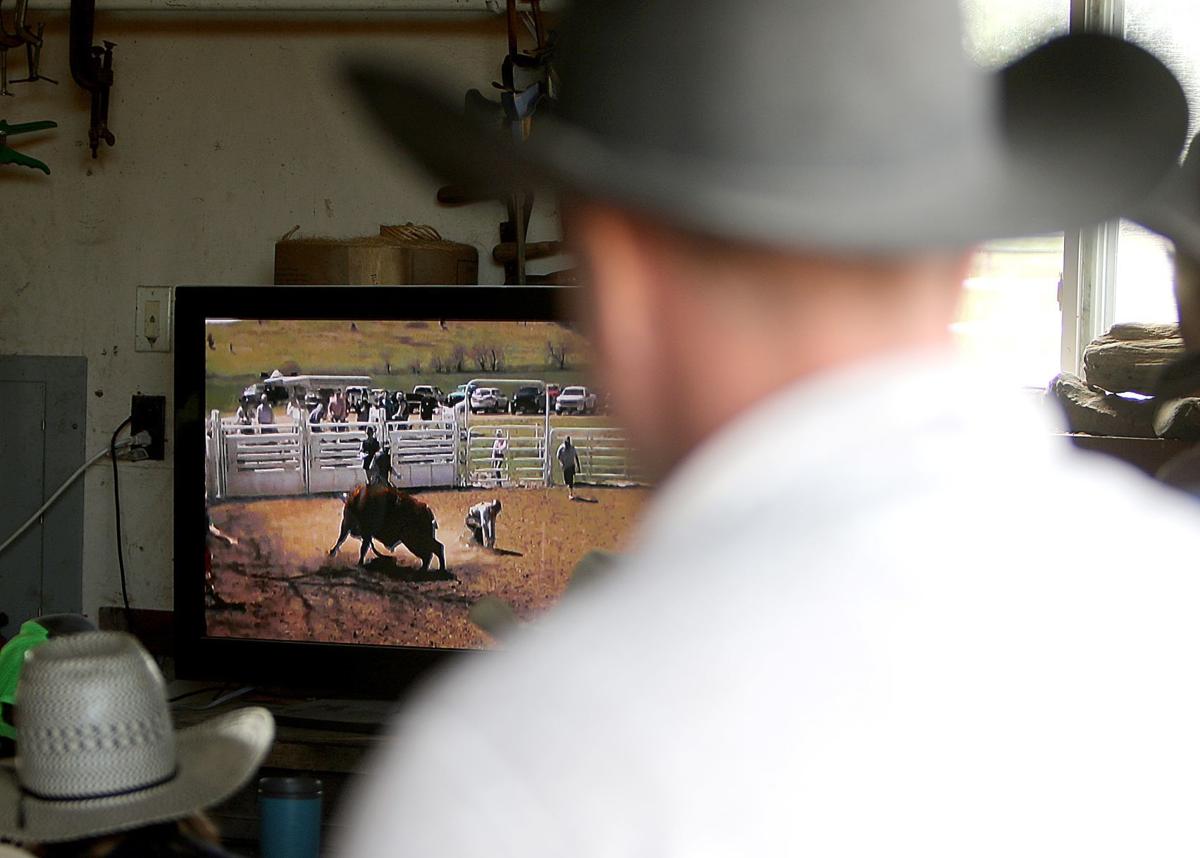 Participants in the bull riding camp review video of their rides from the first day of the camp, which was held at Thad Boswell’s ranch north of Rapid City on April 30-May 2. 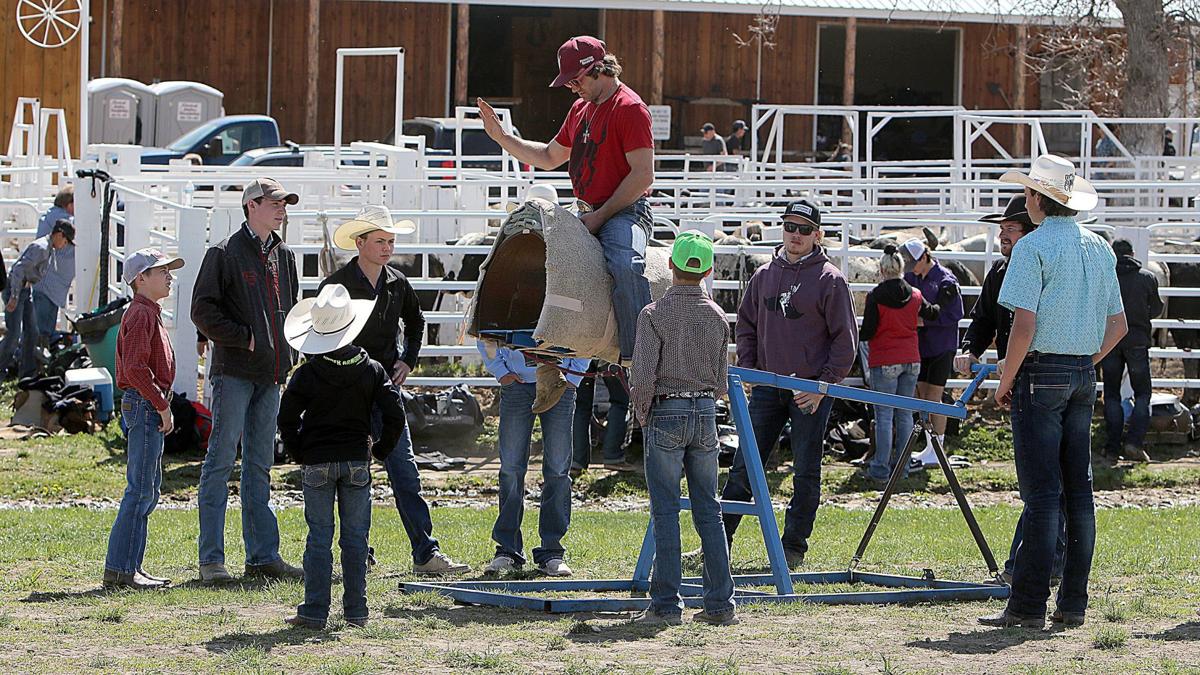 For young bull riders looking to sharpen their skills, the annual Bothwell-Weischedel Bull Riding & Fighting School is an excellent opportunity to test their mettle and learn the tricks of a very dangerous trade from top professional bull riders.

This year’s event, held on May 1-3 at the Bothwell ranch north of Rapid City, accomplished that purpose in fine style, according to Thad Bothwell, a former National Finals Rodeo qualifier and organizer of the event.

“We had 36 kids with the bull fighters (four), and I think this was one of our best schools,” Bothwell said. “We had great weather and a good group of kids who wanted to learn and get better. We had scheduled the event for April, but postponed it because of everything that was going on with the virus. Having the school early in the year helps get the kids tuned up for the high school and junior high rodeos. And we try to have stock (in addition to Bothwell Bucking Bulls, stock contractors included Weischedel Bucking Bulls and Ed Chauncey Bucking Bulls) that the kids can learn on with little risk of injury.”

“This was my first year doing the school, but I’ve known the Bothwell’s for a handful of years now and they hit me up early this year and asked me if I wanted to be a part of it,” said Savage, the 2005 National High School champion. “I put on a bull riding school in Casper in April every year, and it’s something I like to do, so I was more than glad to get to do it. I like to help the next generation coming up, and it helps me, too, to just get back to the basics. It helps kids out a lot and really it helps me out a bunch, too.”

“Counting this year, I’ve been there three times,” Bradford said. “They were all good teachers, and it was nice to get on good bulls and learn all you can. This year I learned how to slide and ride and not just get that comfortable seat so you can react when they come out. I didn’t expect to win, and it didn’t really matter to me. I was there to learn and not to win. I wanted to learn all I could and get everything out of it I could.”

Cooper Filipek earned the distinction as the top-hand among the bull fighting continent. Perhaps not surprising given the unique perspective the Rapid City Central junior takes with him into the rodeo arena.

“People say I’m kind of crazy for doing that, but it’s pretty fun,” Filipek said. “You just can’t be scared. Just have a good mindset and just think of the bull as some mother’s calf.”

“My brother rides bulls and they always needed someone to help out fighting bull, and I just kind of got into it that way. And I’m thankful they had a school that I could go to learn about it," he said. "Pat Crawford was the teacher and he taught me a lot. I had a lot of fun with him and he helped me out with a lot of stuff including how to think on your feet when you are out there.”

Thad Bothwell wasn’t the only Bothwell with bull riding experience at the event. Thad’s son, Tanner, a two-time Sturgis high school state wrestling champion and 2019 Rodeo Rapid City bull riding champion, was on hand to help with herding bulls to chutes and flanking when necessary.

“Being my dad’s son, I grew up into it and that’s kind of how I started riding bulls. I got picked on by the guys who were in the school that were getting on bulls and that I needed to get on bulls and I finally started, I guess,” Bothwell said. “It’s always been a good school, but this year was a really good school given the circumstances with Covid 19 and everything. Brett and Clayton and I all traveled together at one point in time and they were really good bull riding coaches for me. And Jobie Dryden is one of my dad’s students and he has probably been to every school my dad has ever had, and is really good with the kids.”

A good assessment according to his dad.

“What I like about them is that they are just good with the kids,” Thad Bothwell said. “There are a lot of good bull riders out here, but a lot of them can’t relate to the kids and teach and explain as well as they can. I’ve been doing this since ’99 and will keep having them as long as I can get good guys to work with the kids.”

One arrested at secondary protest, police grateful for peaceful demonstrators

One person was arrested in Rapid City during a secondary protest of the death of George Floyd Saturday afternoon.

Participants in the bull riding camp review video of their rides from the first day of the camp, which was held at Thad Boswell’s ranch north of Rapid City on April 30-May 2.