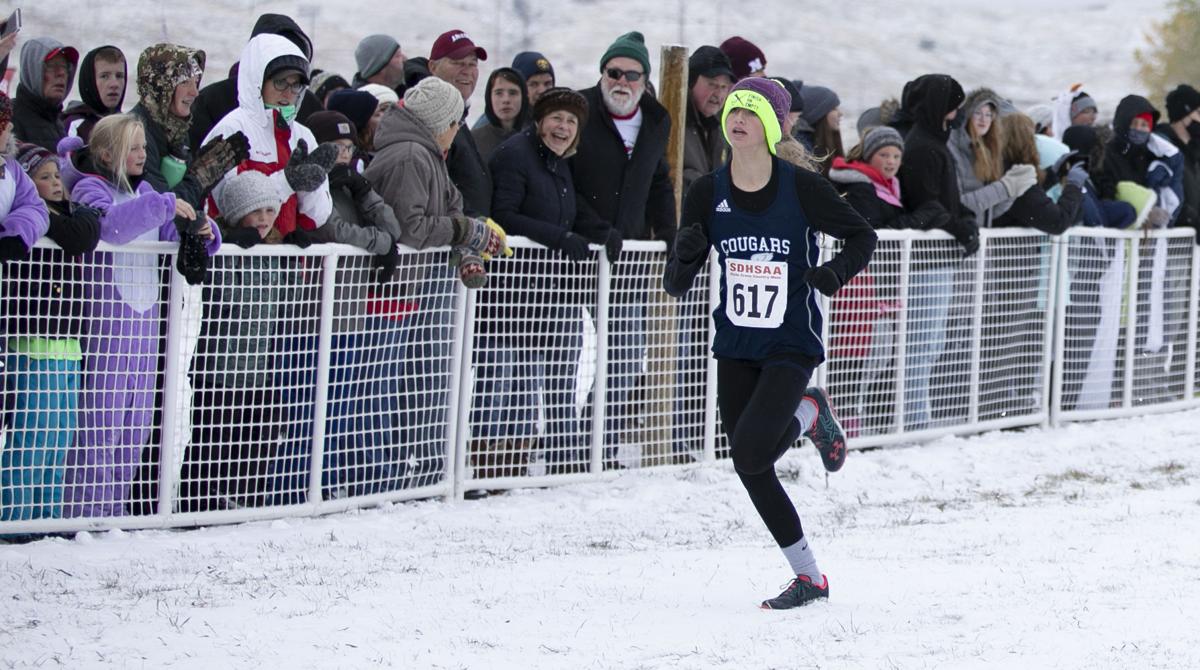 Eighth-grader Hallie Person of Burke crosses the finish line at the Class B Girl's Cross Country State Championship on Saturday at Hart Ranch. Person placed first with a time of 19 minutes and 24 seconds. 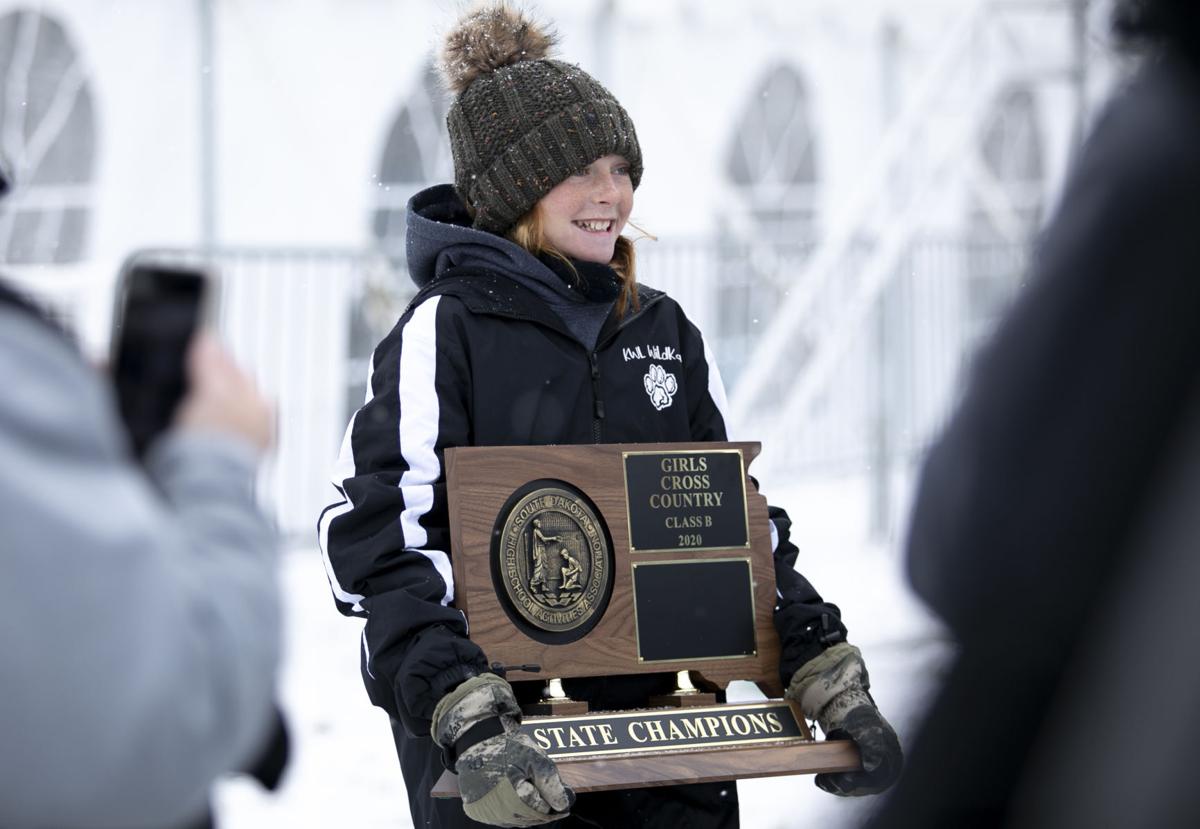 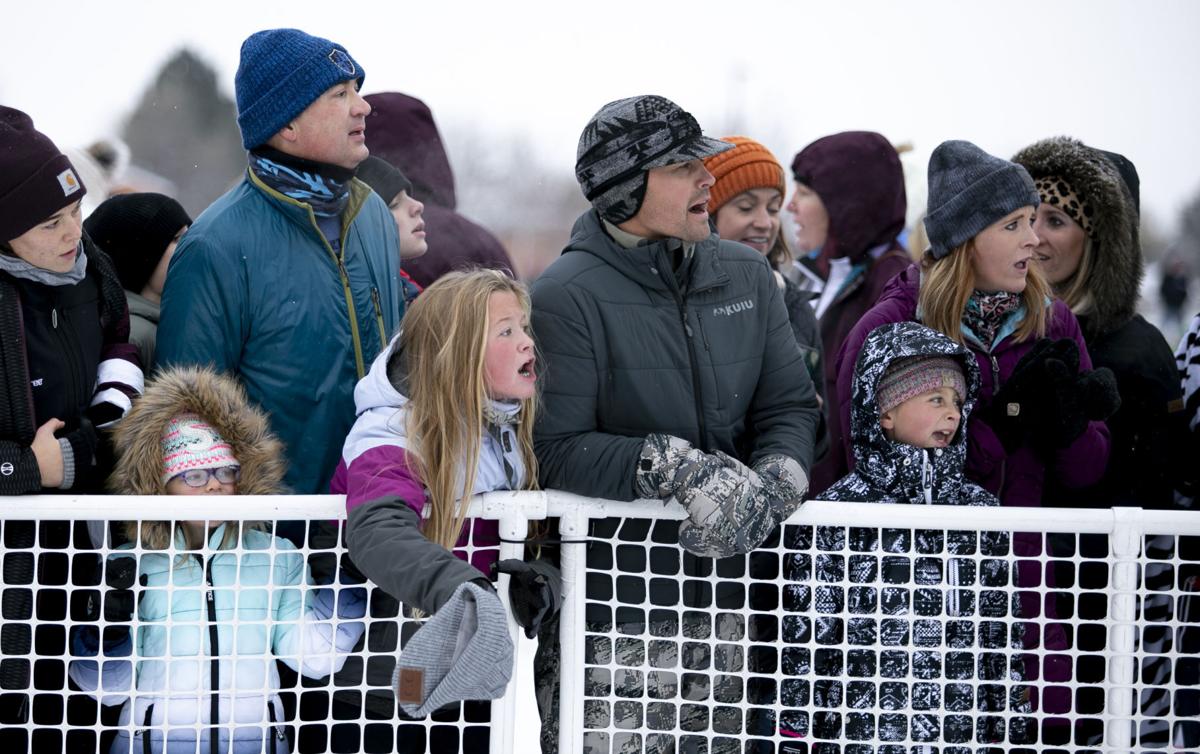 People cheer on runners at the Class B Girls Cross Country State Championship on Saturday at Hart Ranch.

Hallie Person couldn’t feel her face by the time she reached the finish line Saturday morning, but it was her legs that carried her past it before anyone else.

The eighth-grader from Burke stayed neck and neck with Dakota Hills freshman Madison Zirbel for nearly all 3.1 miles, but she was a few steps ahead down the home stretch to finish first and claim the individual title at the Class B Girls Cross Country State Championship at a frigid and snowy Hart Ranch.

“It’s unbelievable,” Person said. “I never thought I could do it, and I’m so glad I had (Zirbel) pushing me the whole time.”

Person ended with a time of 19 minutes,24.02 seconds, edging Zirbel by 3.32 seconds. The two concluded their performances well-ahead of the pack, as the third-place runner crossed the finish line more than 30 seconds behind.

With firm snow on the course and temperatures in the mid-20s, Person said it was important to push through the conditions.

“It was very cold, but I guess it was better than it being 100 degrees,” she said. “You’ve just got to stay warm when you’re warming up.”

Despite not having any top 10 finishers, the Kimball/White Lake girls squad earned a pair of top 20 performances and another in 27th to gain enough points to secure the team championship.

The Wildkats collected 33 points and beat Aberdeen Christian by six points to claim the title.

“We had high hopes and expectations, but we weren’t sure with the weather and a lot of great teams in there,” Kimball/White Lake head coach Stephanie McCord said. “The girls all ran very well. They had that look in their eyes. They knew they were going to go out there to do something special, and they did it.”

Sidney McCord led her team by finishing in 12th place with a time of 21:01.19. Taya Chelmo placed 20th with a time of 21:21.41 time, and Autumn Baker’s 21:33.03 time was good enough for 27th. Christine Gaulke and Summer Skluzak also picked up points for the Wildkats with 31st and 72nd place performances, respectively.

Stephanie McCord said the weather was a possible issue, but it was warmer and less windy than she expected.

“We were a little concerned with it maybe being slippery in some places,” she said. “But we knew everybody else was in the exact same position as we were, and we tried to look at it as an adventure.”

Wall finished in 11th place out of 20 schools and New Underwood ended in 19th.

Eighth-grader Hallie Person of Burke crosses the finish line at the Class B Girl's Cross Country State Championship on Saturday at Hart Ranch. Person placed first with a time of 19 minutes and 24 seconds.

People cheer on runners at the Class B Girls Cross Country State Championship on Saturday at Hart Ranch.