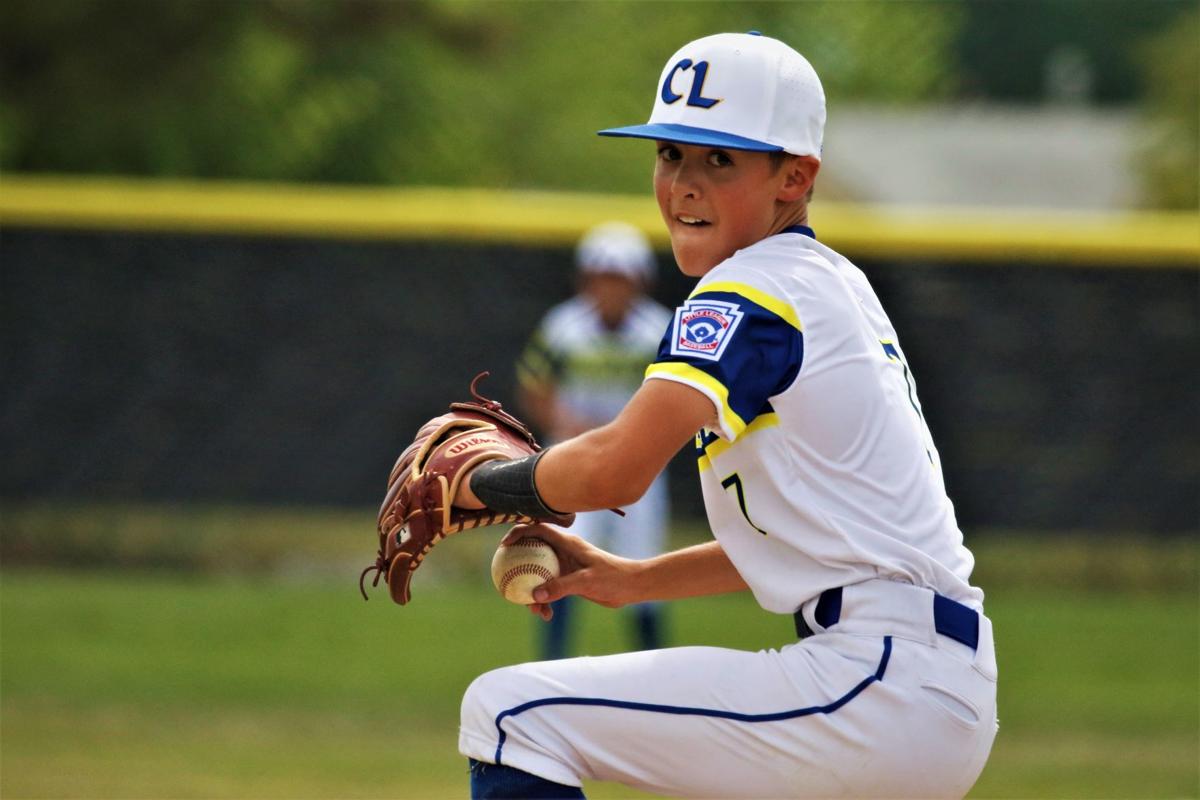 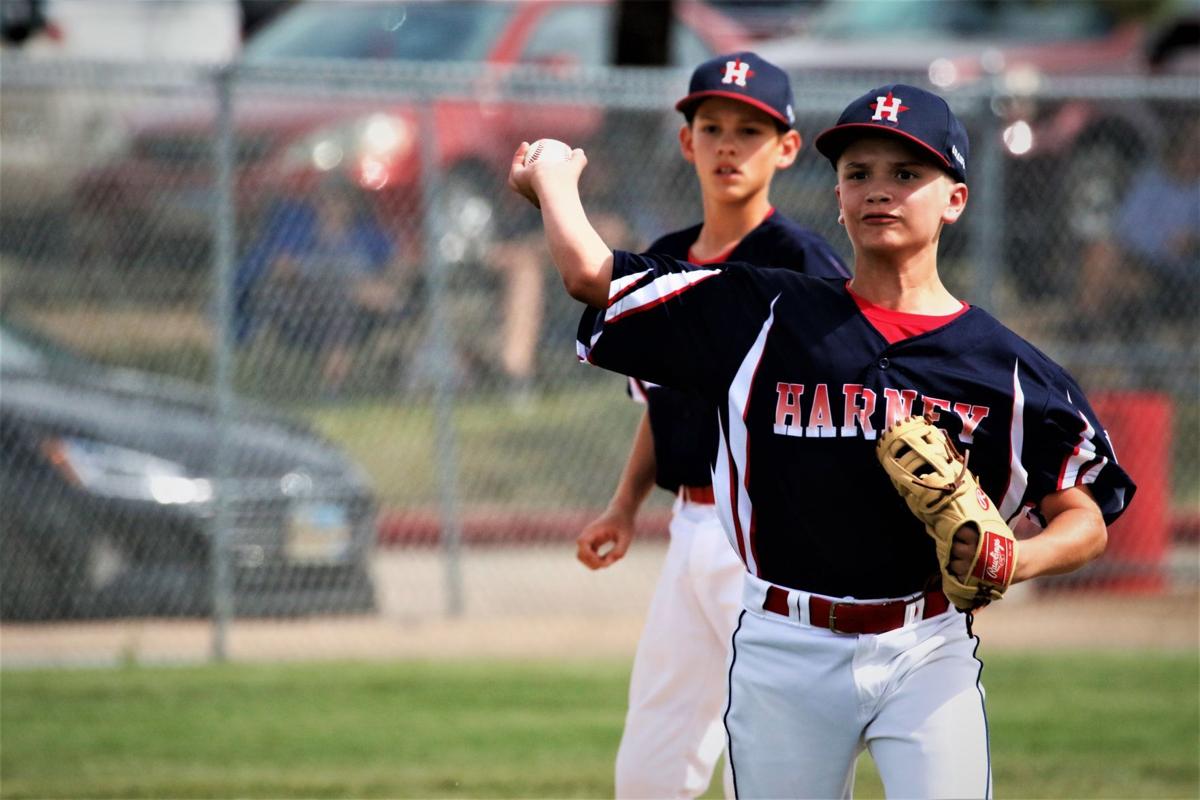 Harney third baseman Aiden  Devine makes the throw to first base for an out Saturday in the South Dakota State Little League semifinals against Canyon Lake at the Harney Little League Complex. 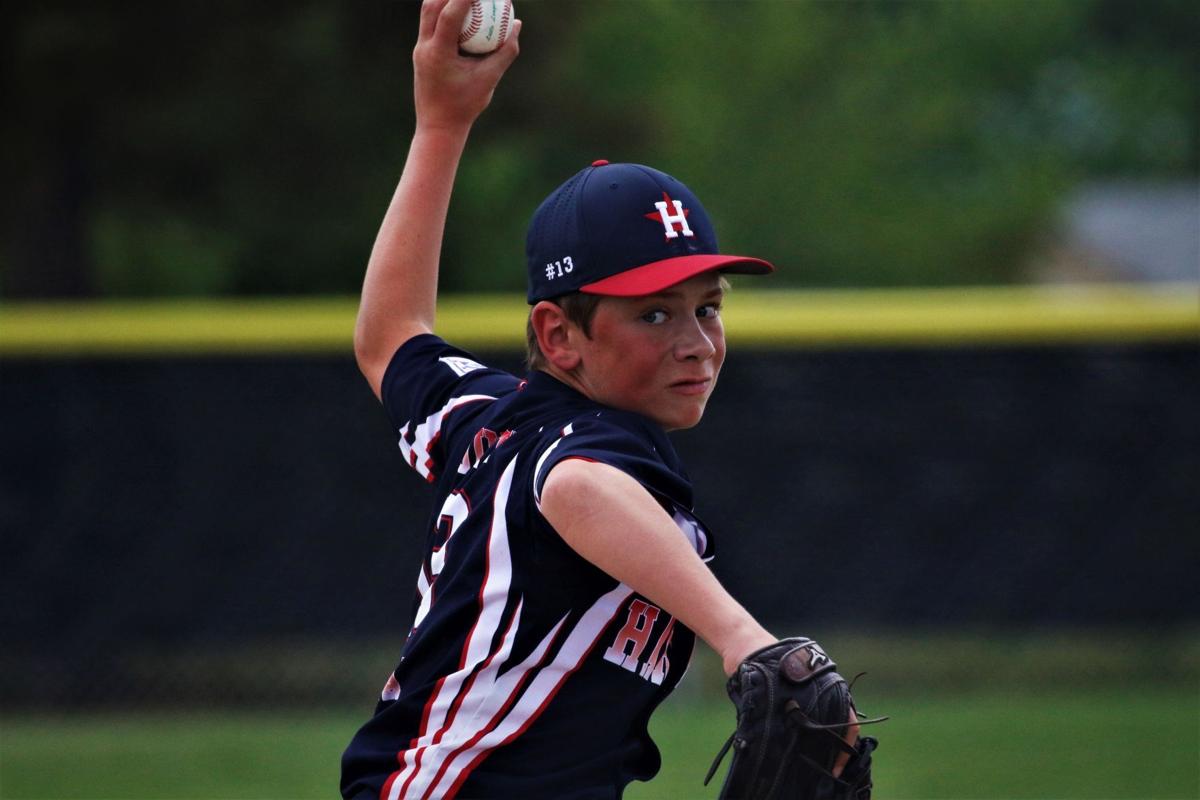 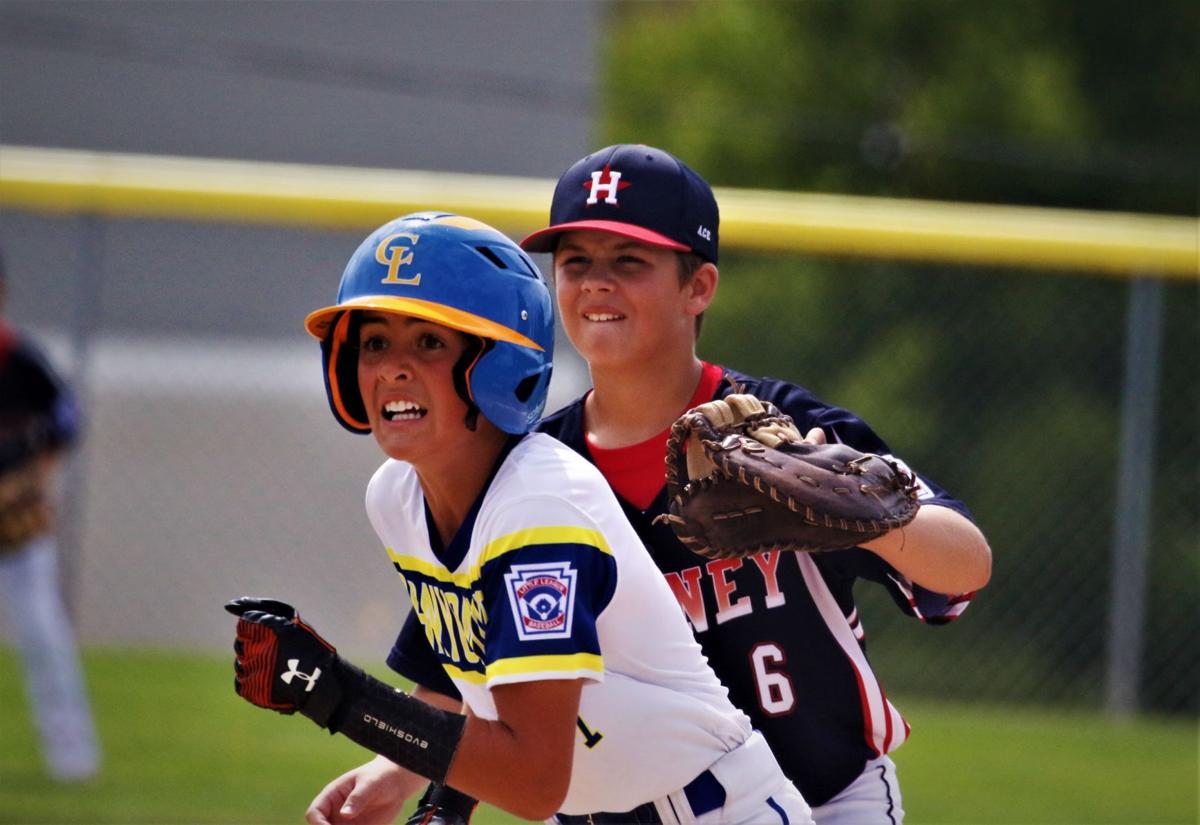 Wyatt Reeder of Canyon Lake watches the ball as he goes a few feet off of first base as Harney first baseman Ashton Paulsen gets ready for the play Saturday during the South Dakota State Little League tournament at the Harey Complex. 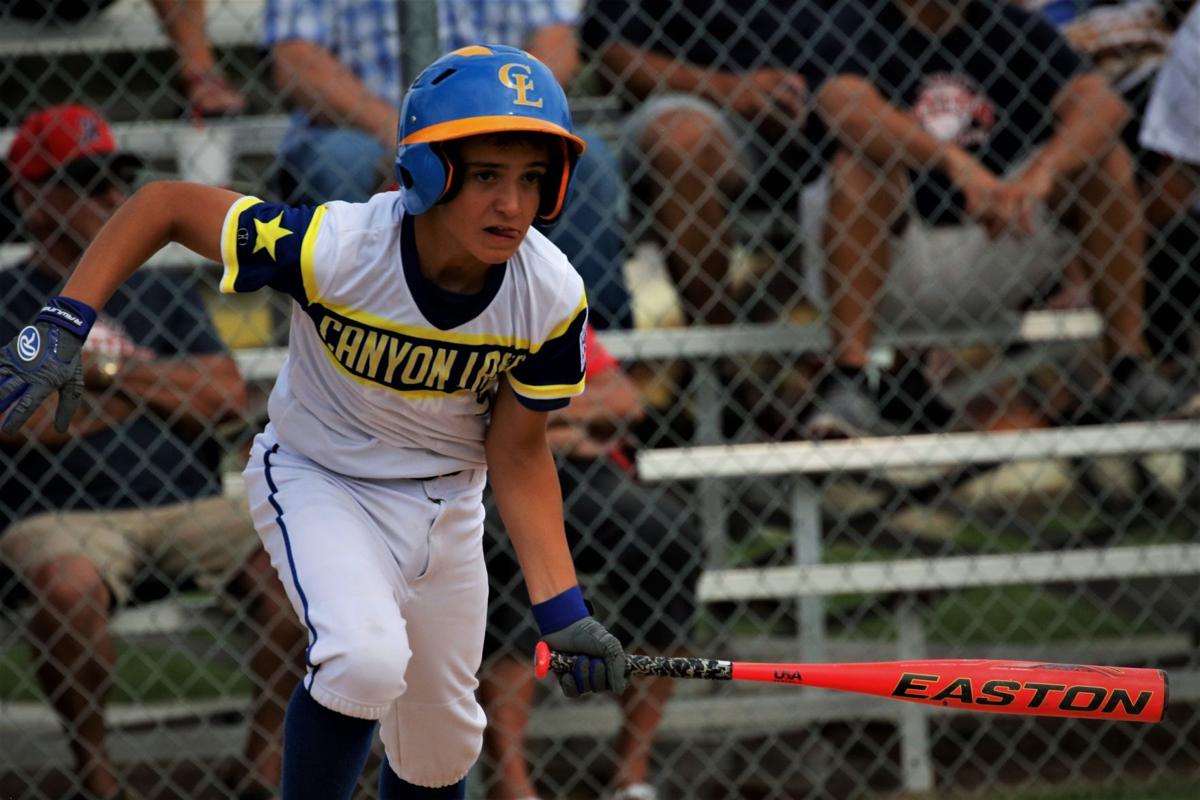 Canyon Lake's Burke Eschmeyer runs to first base after a ground ball against Harney Saturday in the South Dakota State Little League semifinals against Canyon Lake at the Harney Little League Complex. 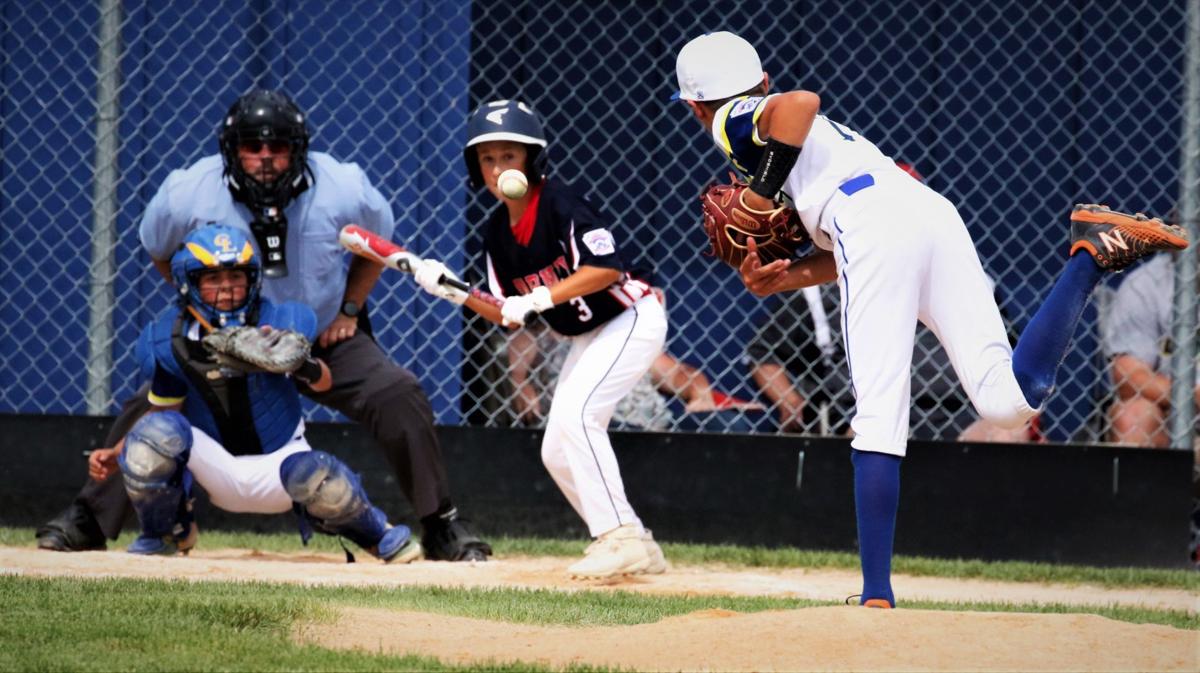 In the title game, Canyon Lake will face Sioux Falls, which got by Capital City Saturday night 4-1.

"I take my hat off to the Harney team," said Kieffer, the Canyon Lake manager. "We knew it was going to be a battle. Declan (Mickley) is a a great pitcher. He throws hard and more importantly, he is a great kid."

The manager's son, Lars Kieffer, broke the game open with a bases-loaded triple in the top of the fifth.

"I couldn't have done it without my teammates," Lars Kieffer said. "I had the triple, but scored them. If they didn't get on base, I wouldn't have scored anybody. They (Harney) are a good team and fought hard, but we pulled it out and got the W."

Canyon Lake got on the board with a pair of runs in the first inning. Kieffer scored when Karter Brager reached on an error and he cored on a sacrifice fly by Connor Cruse.

Harney cut the lead to 2-1 in the third inning on a RBI double by Josh Elder, scoring Mickley, who had singled.

Once again Harney hung tough and cut the lead to 4-2 in the bottom of the fourth when Mickley doubled and scored on an error.

A tight game through four innings didn't stay that way when Canyon Lake broke it open in the fifth inning on the bases-loaded triple by Kieffer to make it an 8-2 game. One hitter earlier Reeder was hit by a pitch with the bases loaded.

Brager led the inning off with a single, but he was ejected for unsportsmanlike conduct for throwing his bat. He had been warned earlier for the same thing.

There was no out, and Bridger Karn replaced him on the bases. Because Brager was ejected, he cannot play in Sunday night's title game.

"I have a soft heart for Karter because he was on my Rocker team this year and I have played with him for a couple of years," Chris Kieffer said. "First and foremost, he is a great kid. It was devastating for him, being in his last year of Little League. The kids held their composure, and I am so proud of them. It was something where they could have put their head down and go the other way."

With Reeder pitching well on the mound, Canyon Lake got a pair of insurance runs in the top of the sixth inning on a two-run double by Reagan Koskan.

"They just started hitting the ball really hard," Harney manager Mike Devine said. "They were finding the open spots. Hats off to them, they played a great game."

Reeder led Canyon Lake with two hits and two RBI, while Knutson and Adam Jaragoske both had two hits. Kieffer had the three RBI and Koskan had two runs batted in.

Reeder went the distance for Canyon Lake and gave up four hits and two runs, walking one and striking out three. Mickley gave up four runs on four hits in four innings for Harney. He walked four and struck out four.

"Our kids came out and hit the ball hard. So much better today than the last game. And we had an amazing pitcher  (Reeder) on the mound," Chris Kieffer said.

Mickley had two hits for Harney, with Elder and Aiden Devine with one RBI each.

"The kids did great. Declan was throwing well on the mound. We had a couple of errors early that ran up his pitch count, but that is Little League baseball," Mike Devine said.

Harney will play Capital City in the third-place game at 5:30 p.m.

Canyon Lake, the defending state champions, will shoot for another championship Sunday night.

"We have to play hard as a team, stay together and never back down," Lars Kieffer said.

Chris Kieffer said it is East River vs. West River for the championship, and that should make it a fun game.

"We'll take a look, but we won't change the way we attack it, and we'll try to go play our game and do the best that we can," he said.

In the other semifinal game, all five runs were scored in the first inning, with Sioux Falls jumping on Capital City for four in the first. There were only seven hits in the game and none of the runs were earned.

Drake Eastman went the first 5 1/3 innings for Sioux Falls, giving up two hits and the one unearned run, striking out seven. Cason Mediger got the final two outs for the save.

Cooper Terwilliger went the distance on the mound for Capital City, giving up four hits and the four unearned runs. He walked one and struck out nine.

Earlier in consolation play, Rushmore advanced to the fifth-place game with a 6-4 win over Timberline.

Rushmore took a 4-1 lead with a four-run second and added a pair of runs in the fourth, breaking a 4-4 tie.

Rushmore had eight hits, with Riggin Kasusk leading the way with a pair of singles.

Colton Mehlhaff, Blayn Hung and Carter Kemp all had two hits for Timberline.

Rushmore faces Belle Fourche in the fifth-place game at 3 p.m., while Timberline takes on Sturgis for seventh place at 12:30 p.m.

Belle Fourche moved into the fifth-place game with a tough 4-3 win over Sturgis. Belle scored one run in the second inning but tied the game with a two-run third inning and scored the eventual game-winner in the the fifth.

Trig Thomsen and Isaac Runyan led Belle Fourche with two hits each. Sturgis, which scored single runs in the first three innings, was led by Jace Thurman with two hits.

A Rapid City employee driving a pickup hit a person who was lying down on the bike path on Monday morning.

Fewer than 10 COVID-19 cases have been reported to the state health department associated with Camp Judson, state epidemiologist Derrick Haski…

Harney third baseman Aiden  Devine makes the throw to first base for an out Saturday in the South Dakota State Little League semifinals against Canyon Lake at the Harney Little League Complex.

Wyatt Reeder of Canyon Lake watches the ball as he goes a few feet off of first base as Harney first baseman Ashton Paulsen gets ready for the play Saturday during the South Dakota State Little League tournament at the Harey Complex.

Canyon Lake's Burke Eschmeyer runs to first base after a ground ball against Harney Saturday in the South Dakota State Little League semifinals against Canyon Lake at the Harney Little League Complex.