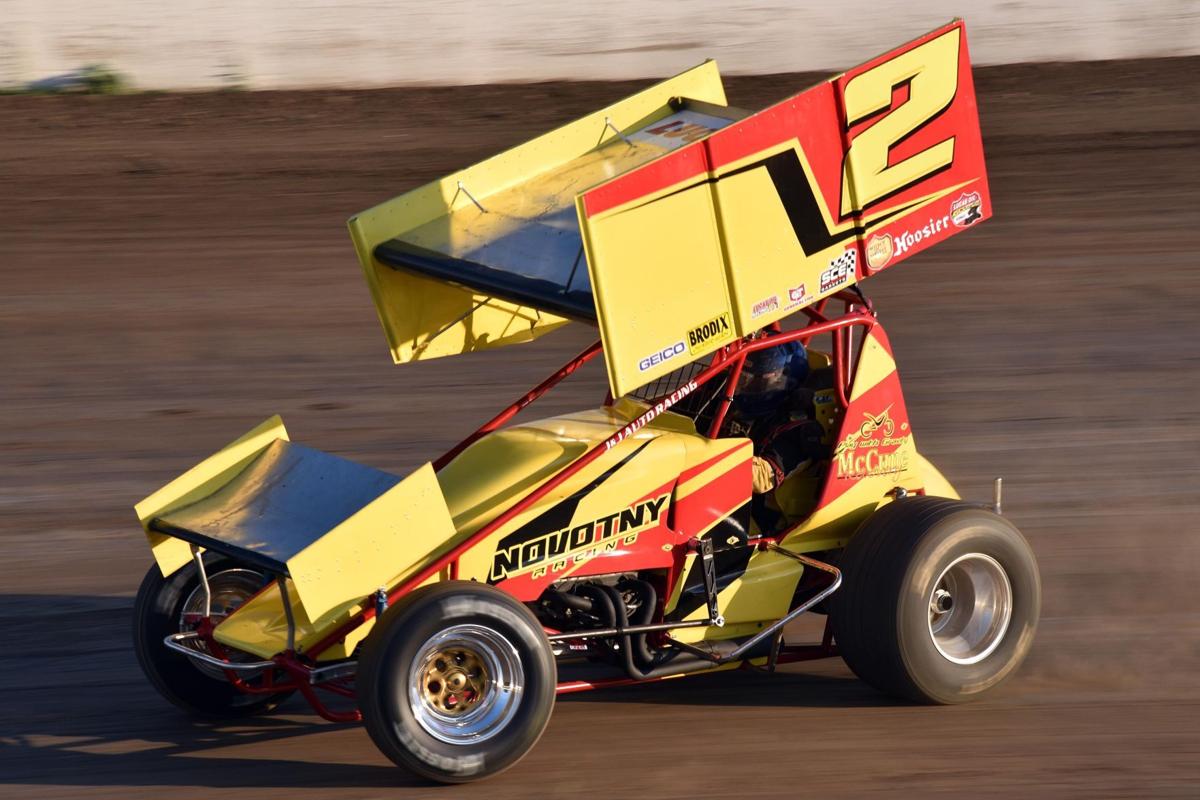 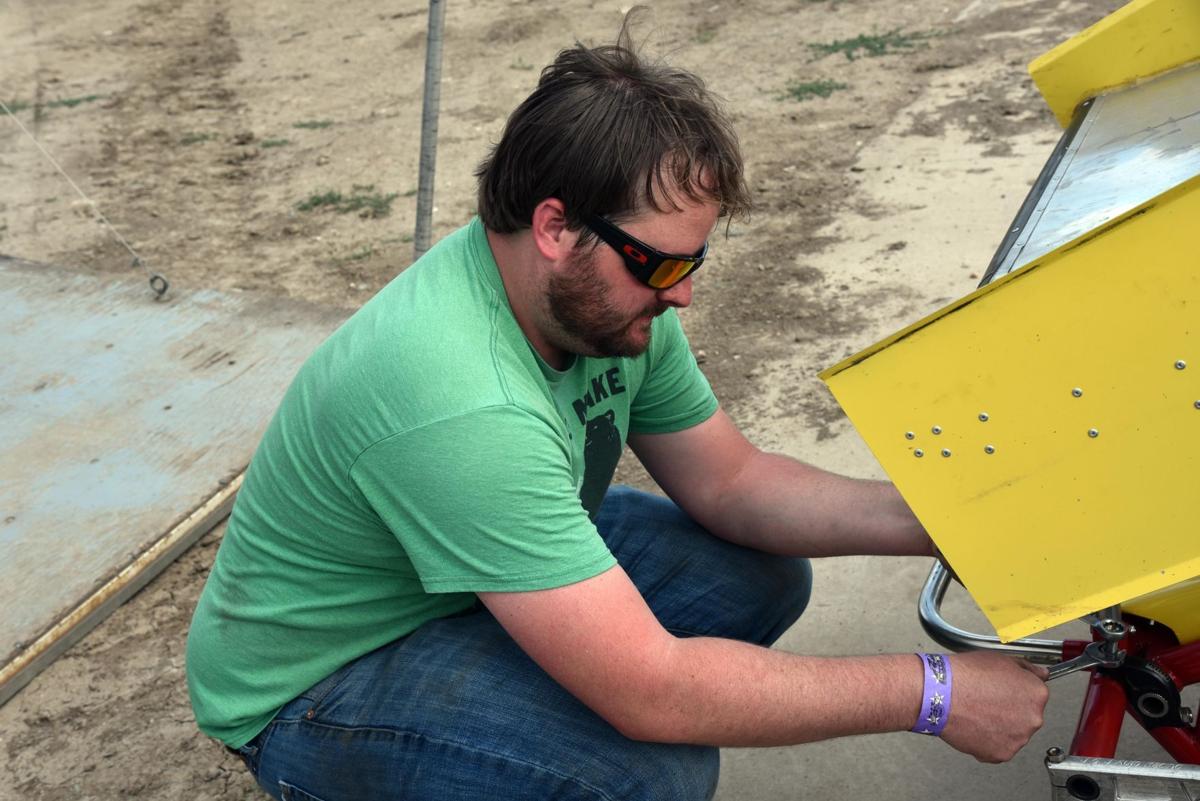 Shad Peterson of Casper, Wyo., does a little wrench work Friday before competing at the Black Hills Speedway.

When it comes to Wyoming racing royalty, the Novotny family is clearly at the top of the hierarchy. With roots taking hold in the earliest days of raising dirt rooster tails across the country, Gene Novotny and his milieu of “open cockpit jockey" established a dynasty from their Casper home ground.

From the early homemade crates to today’s uber high tech sprint cars, the tradition shows little sign of slowing down. One of Gene’s protégés from the halcyon days of lore has given the gift of speed to his son, Shad Peterson, who just happens to be Gene’s grandson.

Shad’s father Reed circled many an oval in his active years of service, giving toddler Shad a clear future direction.

“I always knew that one day, I would be driving one of these,” Shad Peterson said. “Never a doubt."

Filling big shoes didn’t faze the young speedster. “I never felt any pressure; not once," he said.

Since those beginning years, he and the instantly recognizable deuce on the wing have traversed the countryside looking for a chase, though the Black Hills Speedway holds a special place.

“My earliest memories are being in the camper while everyone got the car ready,” he said. “It was such a neat place; I couldn’t wait until I could race on it.”

Away from the track, he is like any other family man, going to work, working on race cars and occasionally being a featured attraction at county fairs as a motorcycle exhibition rider.

Two wheeled racing propelled him to much notice in his teenage years.

For the fair crowds, he performs a dare devil act that might have made Evel Knievel proud. A routine of jumps and other mischief entertains the rider as well as the attendees.

“I don’t really think about what I’m about to do. I’m just as careful as I can be and enjoy the heck out of it," he said.

Thanks to the Covid situation, those hijinks have had a very limited schedule in 2020.

“Only one show so far this year” he says with a sigh.

With the American Sprint Car Series in town for their last show at the this year, Peterson is set to debut a new car and a new look. While holding true to the basic yellow and red theme Novotney Racing has owned for the better part of two decades, the new scheme was a must with the new car.

The only component not new is the power plant.

“Like everything this year, the new motor is still a work in progress so we’ll just have to make do with the old one," he said.

His old ride almost carried him to a big win at the track earlier this year. He led for most of the race, ceding the top spot only in the closing laps.

“That was a heart breaker for sure, but I’ll take a second and a good run any day," Peterson said.

His own family is a constant on most race nights. Pointing to his 2 1/2 year old son he stated, “I was his age, doing the same exact thing I can’t think of a better thing for a kid to be involved with.”

“He always has an answer to every question I throw at him.," he said.

Even with support from such veterans, he is quick to counter with “Ever since I got into one of these, I knew I had to be self sufficient. You have to know everything about the car, and you have to know how you drive it.

“After a disastrous night one night, it ate at me. Really bugged me," he said. "I knew I was better than that. I studied the race all week in my head, turned wrenches on the car during the week and it was better. Not perfect, but a step in the right direction.

“Sometimes little steps are better than a big leap.”

Peterson started tonight’s feature all alone in the final row, quietly maneuvering his way up seventh spots for sixth-place money.

Ryan Bickett of Ramona led the most laps of the event, capturing his second feature win in as many appearances at the speedway this year. He had some extra motivation as a sponsor put up a $500 bonus if he could park the bright white 17b in victory lane.

Mindy McCune, half of a husband and wife racing pair from the Billings, Mont., area ran to runner up status.

The first feature of the night was highlighted by a door to door battle between IMCA Hobby Stock stars John Garrigan and Klayson Jager towards the race’s conclusion. Jager’s chances ended with a collision exiting turn four, Garrigan controlling the race at the restart and going on for the win.

For most of the Wissota Street Stock main event, Arlen Ferguson appeared to have victory number two of the season all but sewn up. Troy Murner finessed his way to the win as the checkered flag blanketed the side by side contention.

Wissota Midwest Modified defending point champion Matt Heinzerling’s season has been one disappointment after another, after failing to finish most of the events entered.

Perseverance paid dividends as man and machine were in perfect synchronization for his first victory lane celebration of the year. Current high point man Darin Hauff held off Kyle Harkin for second.

The Lebanese government has resigned. Will revolution ensue?

The Lebanese government has resigned. Will revolution ensue?

Shad Peterson of Casper, Wyo., does a little wrench work Friday before competing at the Black Hills Speedway.