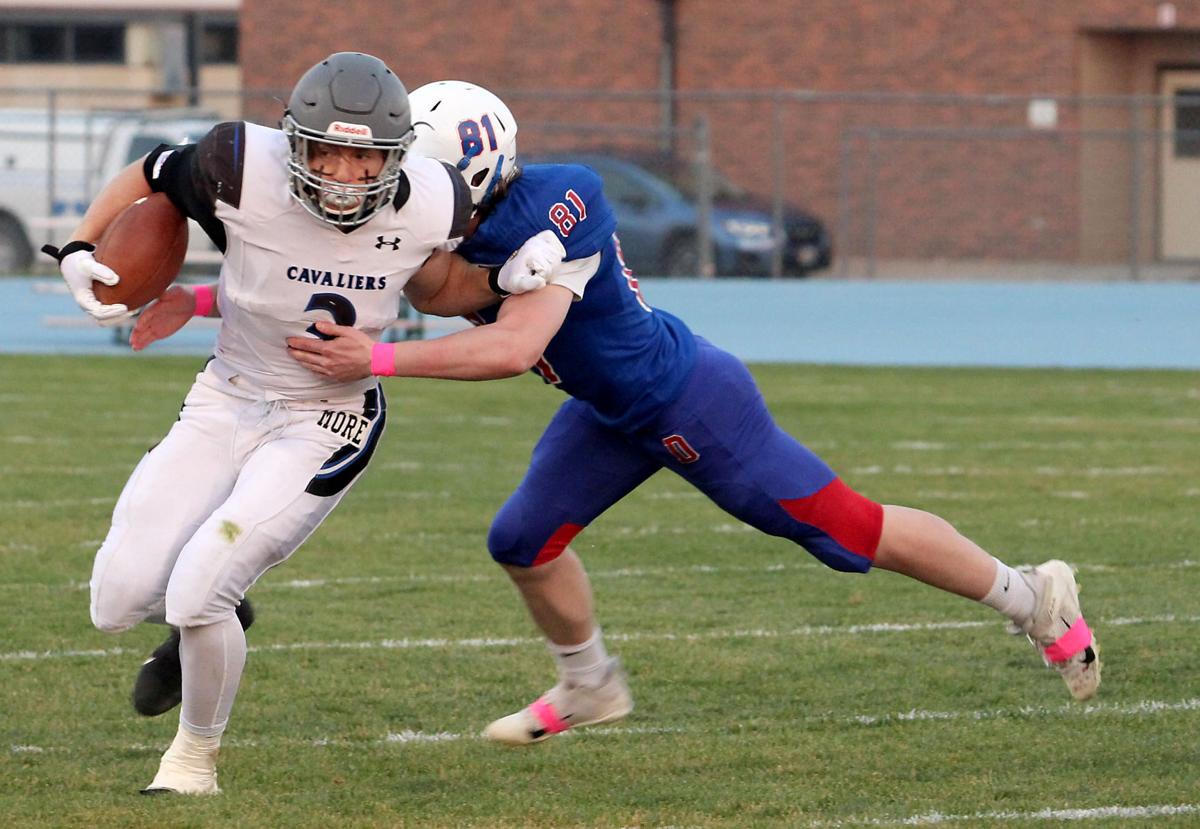 St. Thomas More's Ryan Wojcik breaks a tackle on a big run for the Cavaliers in their win over Douglas on Dave Brodie Field at Patriots Stadium in Box Elder. 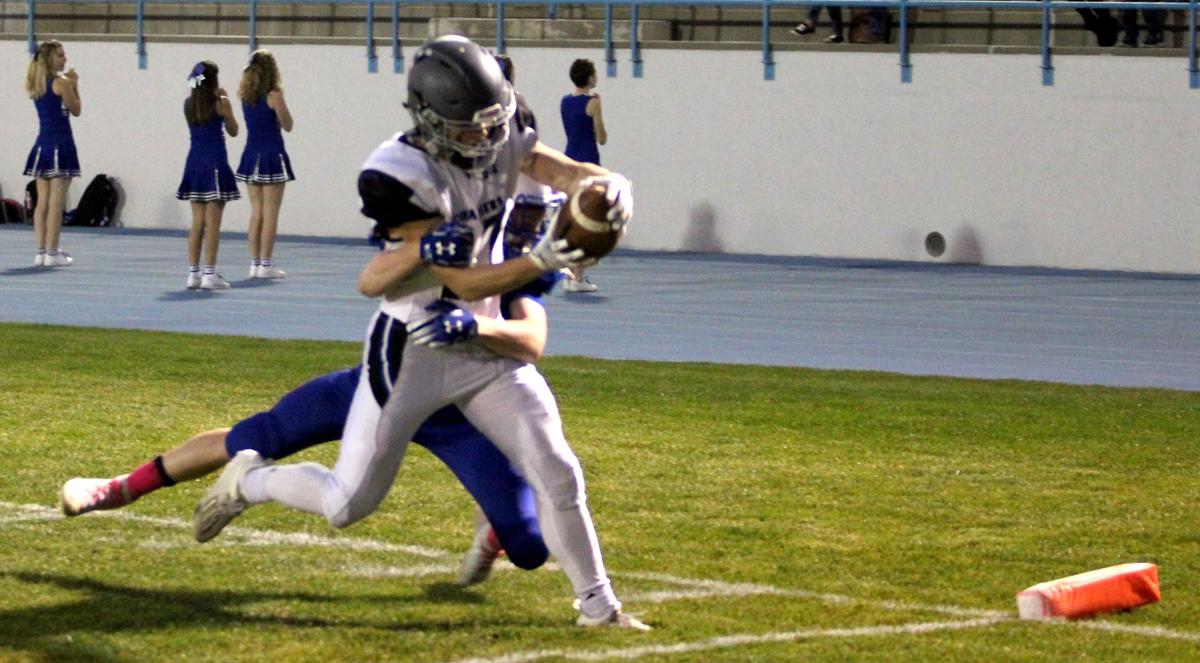 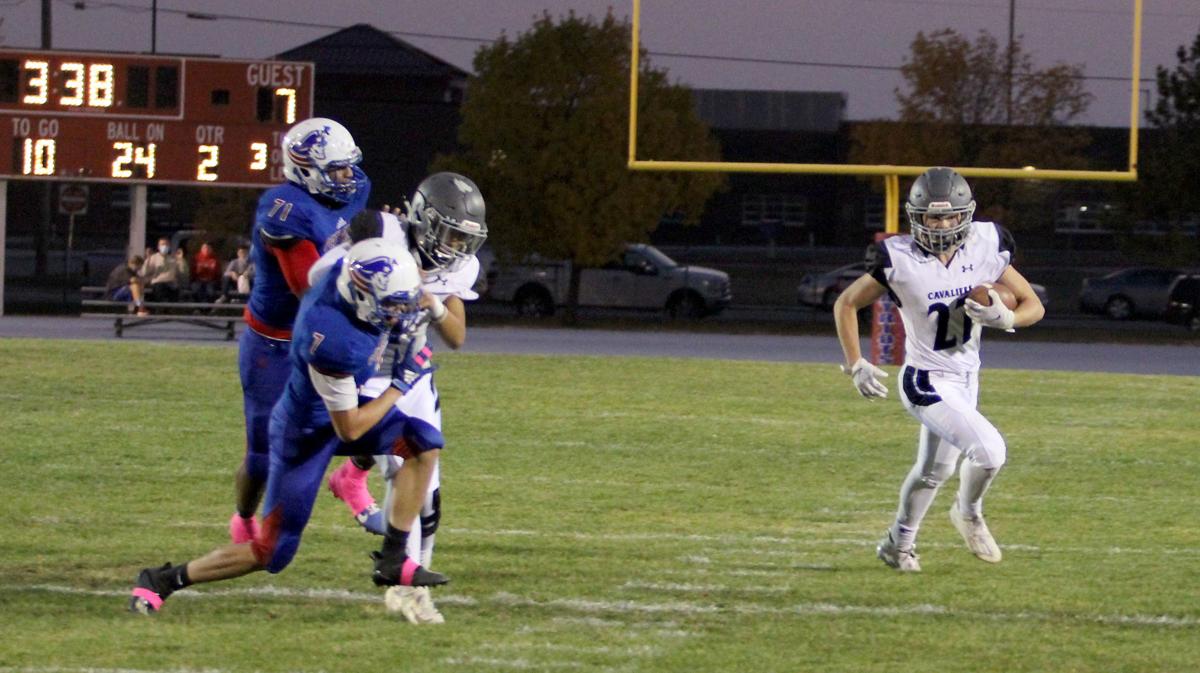 St. Thomas More quarterback Jed Sullivan got out in front of a toss play to make a block to spring Matthew Larson for a touchdown run in the second quarter of the Cavaliers' win over Douglas on Dave Brodie Field at Patriots Stadium in Box Elder. 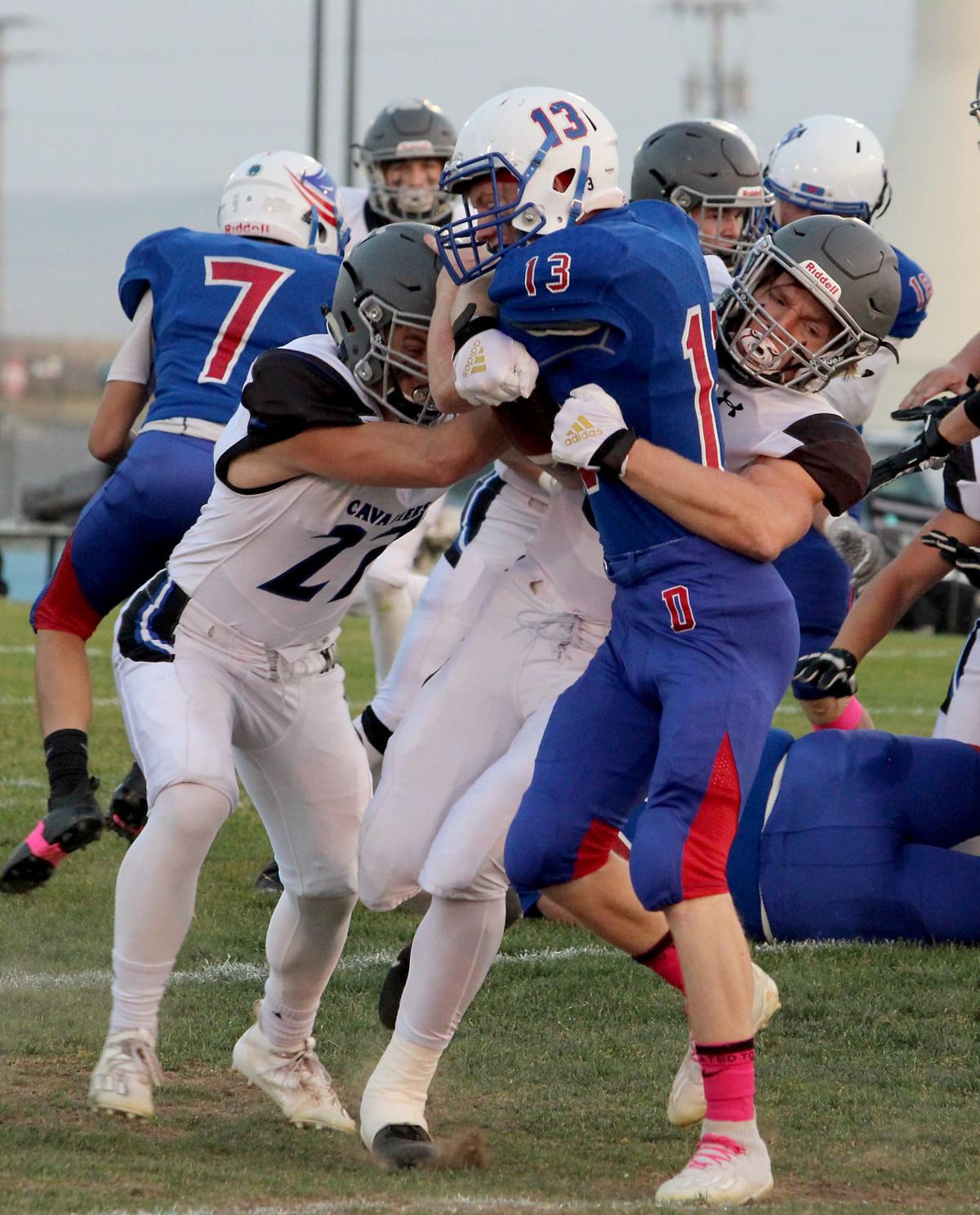 For the eighth straight year and 15th in the last 17 years, the Cavaliers did just that, winning the Rushmore title by running past Douglas 45-18 Friday night at Dave Brodie Field at Patriot Stadium.

"As always, we had a goal in mind, the seniors wanted to win four straight Black Hills Conference championships, and they did that," STM head coach Wayne Sullivan said.

It wasn't always an easy win for the Cavaliers, as the Patriots played physical as well and kept St. Thomas More out of the end zone for the first 16 minutes plus of the game.

"That Douglas team is a darn good football team," Sullivan said. "They have probably the best offensive line we have seen all year, along with Winner. They are big, they are strong and physical. As always, Coach Majic had them ready to play."

St. Thomas More, however, took advantage of a couple of second-quarter turnovers and took a 21-0 lead into the locker room at halftime.

After a scoreless first quarter, senior running back Ryan Wojcik got the Cavaliers on the scoreboard first on a 1-yard touchdown run, capping a 42-yard drive. Wojcik opened the drive with a 15-yard run.

STM recovered a Douglas fumble and the Cavs quickly made it 14-0 with 3:32 remaining until halftime on a 24-yard TD run by Matthew Larson.

Another mistake by the Patriots — an interception by Tyson Durham at the Douglas 48-yard line — gave the Cavs another scoring chance late.

Wojcik set up the TD drive on a 30-yard pass from quarterback Jed Sullivan and Charlie Larson went in from 15 yards out for the three-touchdown lead.

"We can out a little flat in the first quarter, then we got our lather going. We had a couple of penalties here and there, and we can't do that as we go on," said Sullivan. "You can't stall our own drives. It's the little things and we preach that, so we have to get better."

STM took the opening second-half possession 65 yards, capped a 1-yard TD run by Charlie Larson, to make it 28-0 four minutes into the third.

Douglas broke through on the scoreboard on a 6-yard TD run by Tyler Clark, capping a 69-yard scoring drive.

The Cavaliers turned to defense for their next score, when Kellen Weber jarred the football loose from Clark and it popped straight in the air into the arms of linebacker Jack Green, who took it to the end zone from about 15 yards out.

The Patriots responded when quarterback David Severson took it in himself on a keeper from 42 yards out to make it a 35-12 game.

Weber, now in at quarterback, got on the scoreboard for the Cavaliers when he scored on a 16-yard run for a 30-point STM lead midway through the final quarter.

Green then added three more points for the Cavs with his leg on a 19-yard field goal with 2:53 to play. He would finish with 15 points scored in the game -- nine through kicks and his touchdown.

Clark closed the scoring on a 15-yard run with 38 seconds remaining.

Veteran Douglas coach Dan Maciejczak said they started with the mistakes early and it cost them.

"When we line up and do the things that I know we can do, which is hammer the crap out of the football, we're a tough football team," he said. "Defensively, it's the same thing, but we have to make tackles. We get ourselves in spots, and at times we look like a really good football team. At other times, the same kids are out there, and we struggle. The sad part for me is I believe we have a darn good football team. But we just make too many mistakes that I don't understand how to fix all of the time."

Unofficially, the Cavs had 351 yards of total offense, including 289 on the ground. Charlie Larson led the way with 114 yards, Wojcik with 66 and Matthew Larson with 45 yards.

"I think we played great on both sides of the football, honestly," STM tight end and defensive end Jake Goble said. "We were quicker and faster than all of them on the field, and we used it to our advantage. We had sweeps right down the middle. I think we out-played them."

Clark had a strong game on the ground with 142 yards on 20 carries. As a team, the Patriots unofficially had 267 yards of total offense.

"I felt like we were a pretty physical football team, but in the game of football, you can't just be physical, you have to be physical and a little smarter, keep working hard and cut down on our mistakes," Maciejczak said. "If we can do that, I still feel like we can be pretty strong."

With the win, STM moved to 5-1 on the season, winners of four straight contests.

Sullivan said he thinks his players are finding their rhythm and are comfortable in what they're doing right now.

"We're running behind our ponies. Our offensive line is doing phenomenal," he said. "They are moving the line of scrimmage, even against this big team today."

STM closes the regular season at home Friday against Lead-Deadwood.

Douglas, 1-5, is at Class AA No. 1 Yankton Friday before closing the regular season Oct. 23 at Pierre.

St. Thomas More's Ryan Wojcik breaks a tackle on a big run for the Cavaliers in their win over Douglas on Dave Brodie Field at Patriots Stadium in Box Elder.

St. Thomas More quarterback Jed Sullivan got out in front of a toss play to make a block to spring Matthew Larson for a touchdown run in the second quarter of the Cavaliers' win over Douglas on Dave Brodie Field at Patriots Stadium in Box Elder.