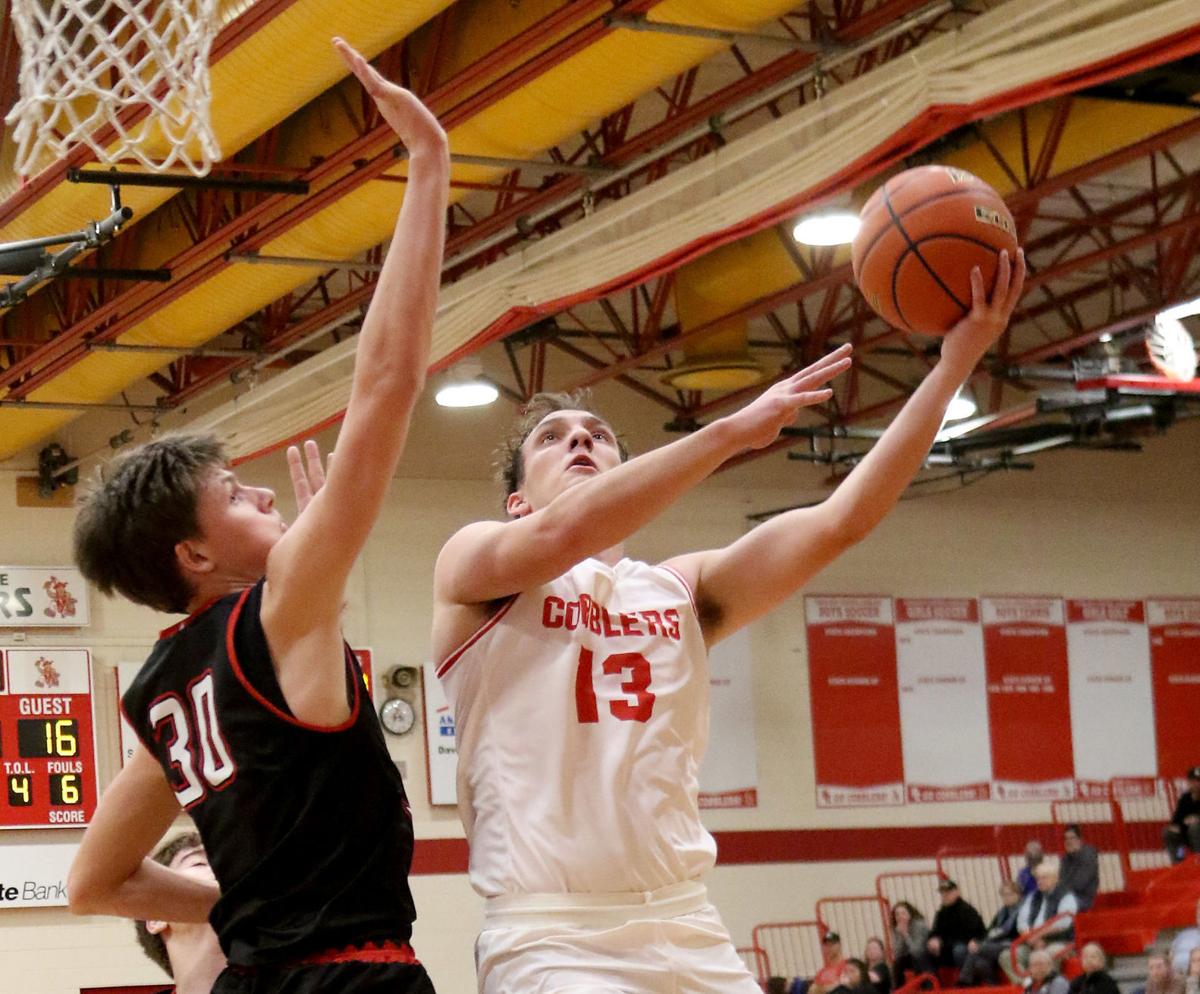 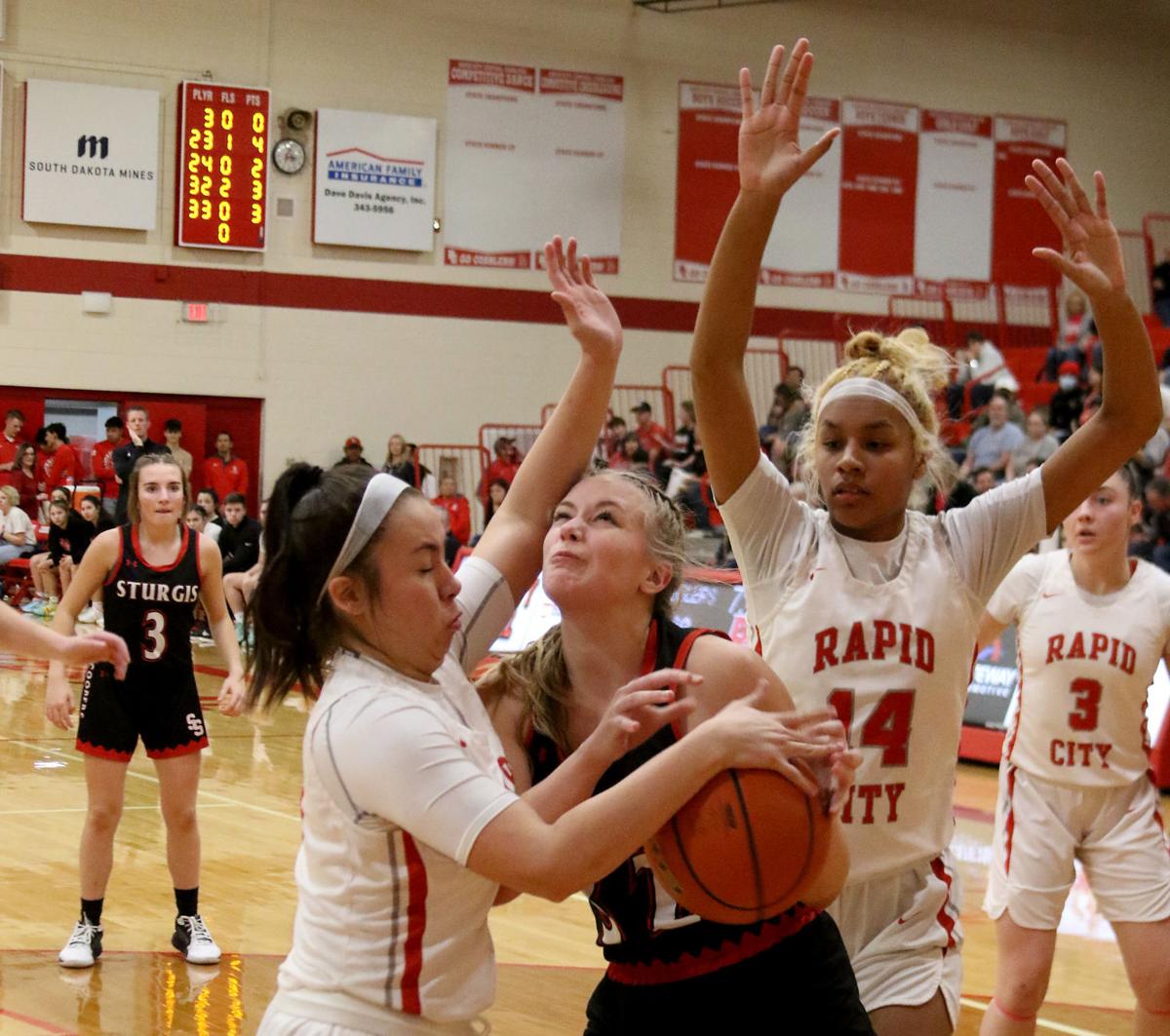 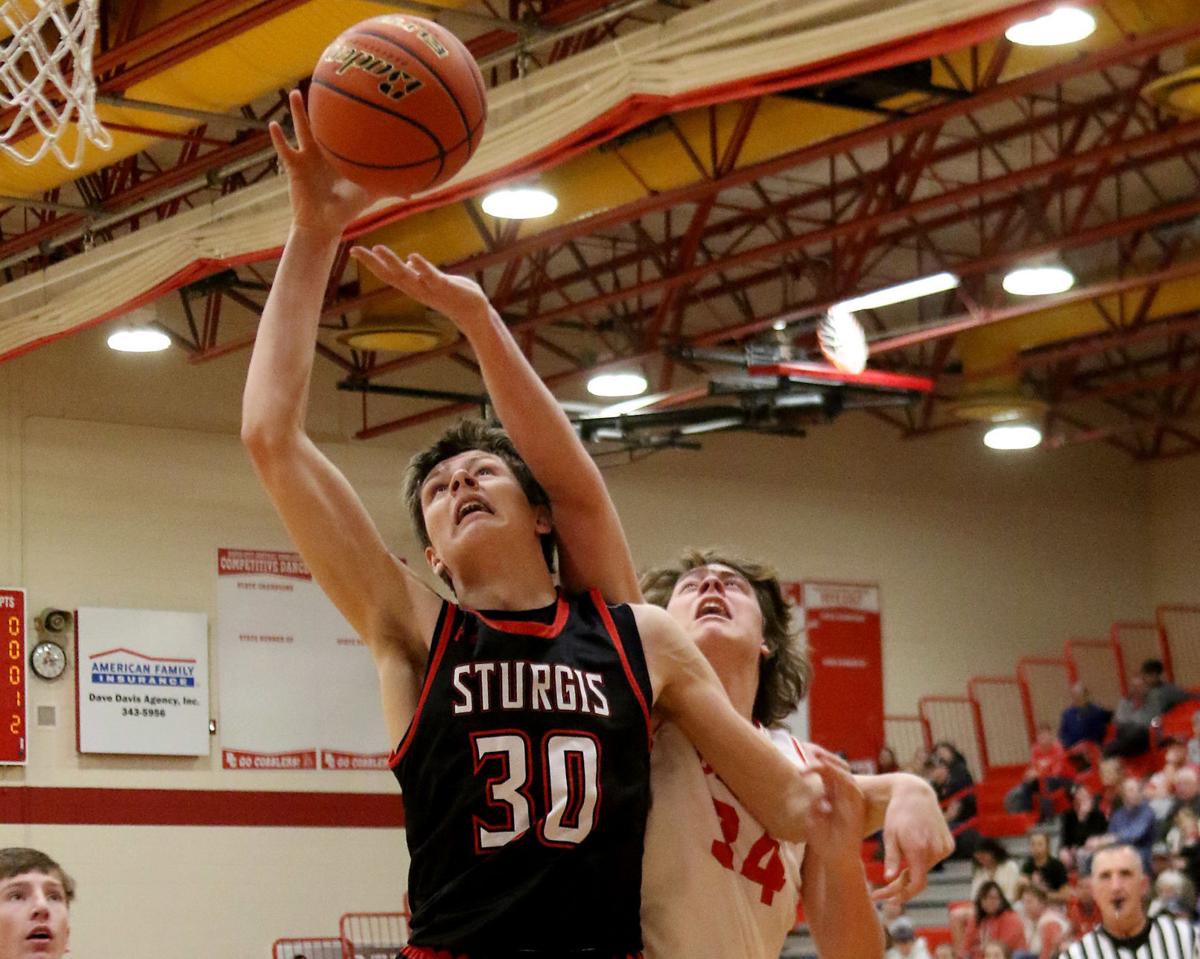 Sturgis center Jake Vliem (30) pulls down a rebound over Rapid City Central's Cooper Totten during the Cobblers' win over the Scoopers Thursday. 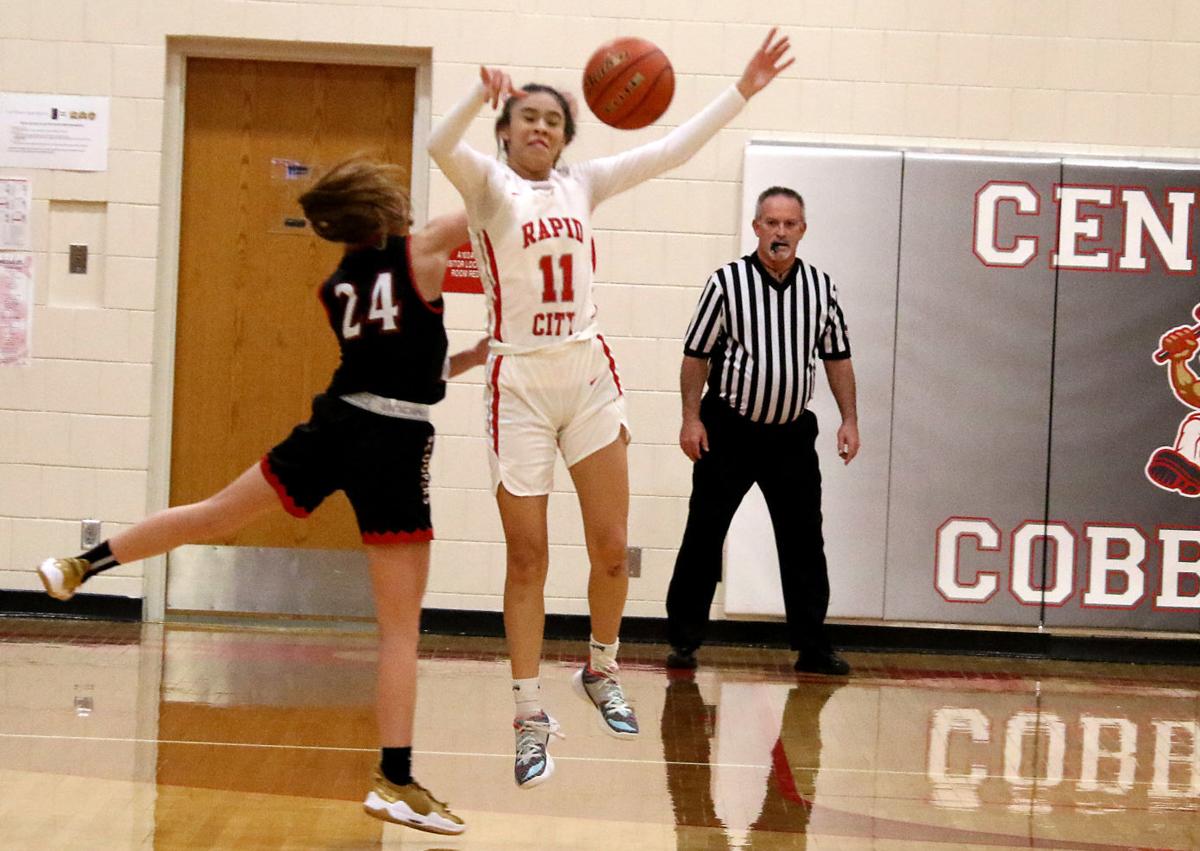 Rapid City Central guard Aaliyah Jones (11) steals a pass and takes the ball coast-to-coast for a layup in Thursday night's win over Sturgis.

After a low-scoring first half where the Rapid City Central and Sturgis boys basketball teams were separated by a point, one team needed to make a run.

It was the Cobblers who found one, stringing together 11 straight points in the third quarter, then holding off the Scoopers in the fourth for a 47-38 win in Class AA action Thursday night at Naasz Gym.

Wyatt Anderson’s efficient inside game netted him a game-high 17 points on 6 of 9 shooting for Central (2-5), while Cooper Totten added 13 points. The Cobblers shot nearly 60% from the floor, went 2-for-5 on 3-pointers and converted just 7 of 15 free throws.

Sturgis (1-9) did not have a double-digit scorer as a trio of players tallied seven points to lead their squad; Jake Vliem, Dysen Peterson and Owen Cass. The Scoopers shot 44% from the floor, went 3-for-11 on 3s and converted 11 of 15 free throws.

Sturgis was held without a field goal in the opening quarter and through the first 10 minutes of the game as Central took a double-digit, 14-4 lead early in the second period with five points from Anderson and a 3 by Jet Janvrin on a wrap-around pass from Anderson.

When the Scoopers did finally sink one outside the free-throw line, a Peterson 3, it sparked a 10-0 run with the help of five points from Vliem, including a 3-point play, to even things up at 14-14 less than halfway through the second.

Neither team managed to break away before halftime, with the scoring standing at 18-17 Cobblers.

Gavin Ligtenberg’s (five points) steal and fastbreak bucket, his first field goal of the even, to begin the second half started a 6-0 run for Sturgis, with Ligtenberg capping off the run with a jump shot to beat the shot clock buzzer and take a 23-18 advantage.

Central answered, however, as Anderson drilled a 3 from the corner, Cael Meisman (six points) converted a jumper and Reno Lowe (two points) hit a reverse layup on the big 11-0 run for a 29-23 lead.

Konner Berndt (five points) and Ridge Inhofer came off the bench and nailed a pair of 3s, Inhofer’s coming at the third-quarter buzzer, to keep the game close and get Sturgis within four, 33-29, heading into the fourth quarter.

Cass opened the fourth with a 3-point play to make it a one-point affair before the Cobblers put together a 7-0 run and held off the Scoopers with a 7-6 scoring advantage in the final 5:25 to secure their second victory of the season.

Central travels to Spearfish next for a game against Wyoming’s Campbell County (3-5) on Saturday at Black Hills State University. Sturgis will host Mitchell (7-2) Jan. 21.

The Rapid City Central girls basketball team had three made 3-pointers through the first three quarters of Thursday night’s clash with Sturgis, hitting one in each period.

In the fourth quarter the No. 5 Cobblers drilled four alone, earning most of their points in the frame and turning an already decided game into a blowout, topping the Scoopers 55-39 in Class AA action at Naasz Gym.

“We’ve shot the ball really well from the perimeter all year long, other than when we played Sioux Falls Jefferson and we couldn’t get a shot,” Central head coach Allan Bertram said. “So it was good to see the kids get back in rhythm and just flow.”

Sadie Glade hit a trio of 3s and finished with a game-high 15 points on 6 of 13 shooting for the Cobblers (6-1). Aaliyah Jones added nine points, while Josie Hill and Nevaya Cuny chipped in eight points apiece.

“We feel we have seven kids who we can really rely on, have a lot of experience and understand what we want from them,” Bertram said. “They all play a ton of minutes and as you can see, nobody really tears the score up. The ball just moves and they find the open girl. It’s really fun to play basketball when you have that kind of teamwork.”

Kelly Heikes came off the bench and paced the Scoopers (2-8) with 11 points, while Kaylee Whatley and Tatum Ligtenberg picked up six points each.

Hill also had a stellar performance on the defensive end, blocking more than half a dozen shots, hauling in rebounds and turning those rebounds into points in transition.

“People get so tied up in points and all that. She’s averaging 13, 14 points a game but people don’t understand how she changes the game,” Bertram said. “A lot of things she does don’t show up in stats that really make us a much better basketball team.”

After a slow start, Central got on the board three minutes and 19 seconds into the contest with a steal and fastbreak layup from Glade, which sparked a 15-2 scoring advantage to close out the first quarter, including a steal and fastbreak bucket by Jones and a 3 from Wicahpi Cuny (five points), for a 15-6 lead.

Following Sawyer Dennis’s (three points) corner 3 off an inbounds pass to start the second period, the Cobblers strung together seven straight points and took a double-digit advantage, 20-9, on Nevaya Cuny’s corner 3, and Central led 28-15 at halftime.

In the third quarter, Jones tallied back-to-back buckets after Glade hit a corner 3, and the Cobblers stretched their advantage to 41-21 after three frames.

Glade opened the fourth with back-to-back 3s, Jones drilled one and Nevaya Cuny finished with the final shot from beyond the arc to make it a 27-point game before subs entered and the Scoopers ended the contest on a 12-0 run.

“You can’t ask anything more from your kids than getting good shot opportunities,” Bertram said. “So I thought they did a really good job of executing the offense and getting the ball where it needed to go to have a chance at some success.”

Central travels to Spearfish next for a game against Wyoming’s Campbell County (3-6) on Saturday at Black Hills State University. Sturgis faces Mitchell Jan. 21 at the Corn Palace.

A teenager was arrested Tuesday for allegedly bringing a loaded firearm to a basketball game at Douglas High School in Box Elder.

Adding 175 sites to the campground in Custer State Park is just wrong, starting with the cost per site to the damage to the park and wildlife.

Rapid City Police are currently seeking the public's help to locate 17-year-old Deaundrea Janis.He has been identified as the suspect in last …

Lawmakers elected to represent us in Pierre have once again stomped on the wishes of the voters. They passed HB1004, a bill to outlaw the home…

Former mayor of Summerset resigns as consultant from city

At a special meeting Sunday, the city of Summerset accepted the resignation of George Mandas — a consultant and former mayor of the community.…

This giant panda cub playing around will make your day

Party time in the wild? Do animals actually get drunk?

Party time in the wild? Do animals actually get drunk?

Sturgis center Jake Vliem (30) pulls down a rebound over Rapid City Central's Cooper Totten during the Cobblers' win over the Scoopers Thursday.

Rapid City Central guard Aaliyah Jones (11) steals a pass and takes the ball coast-to-coast for a layup in Thursday night's win over Sturgis.