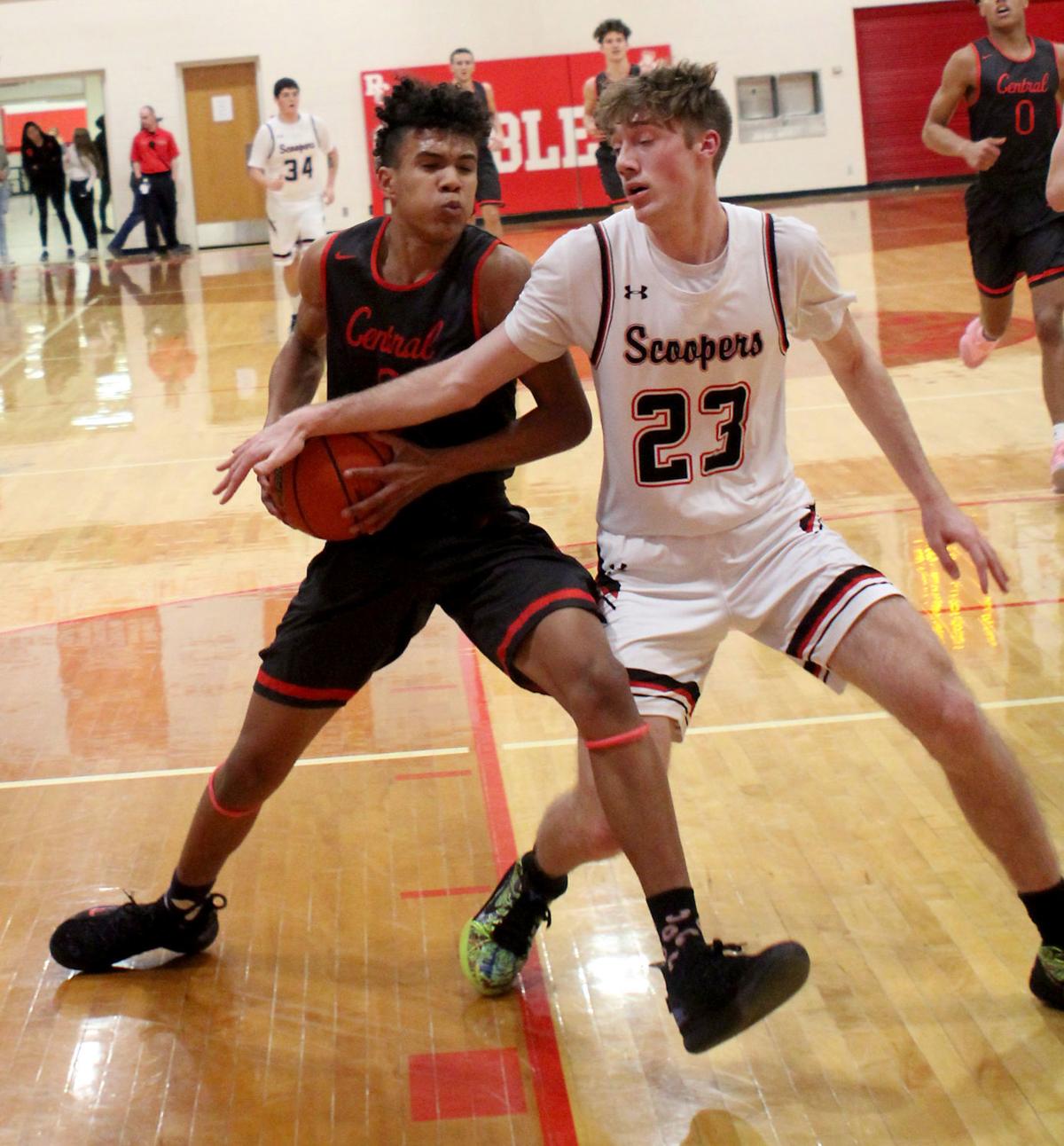 Central's Micah Swallow is fouled by Sturgis' Marcus Myrick as he drives to the basket in the Cobblers' win Thursday night. 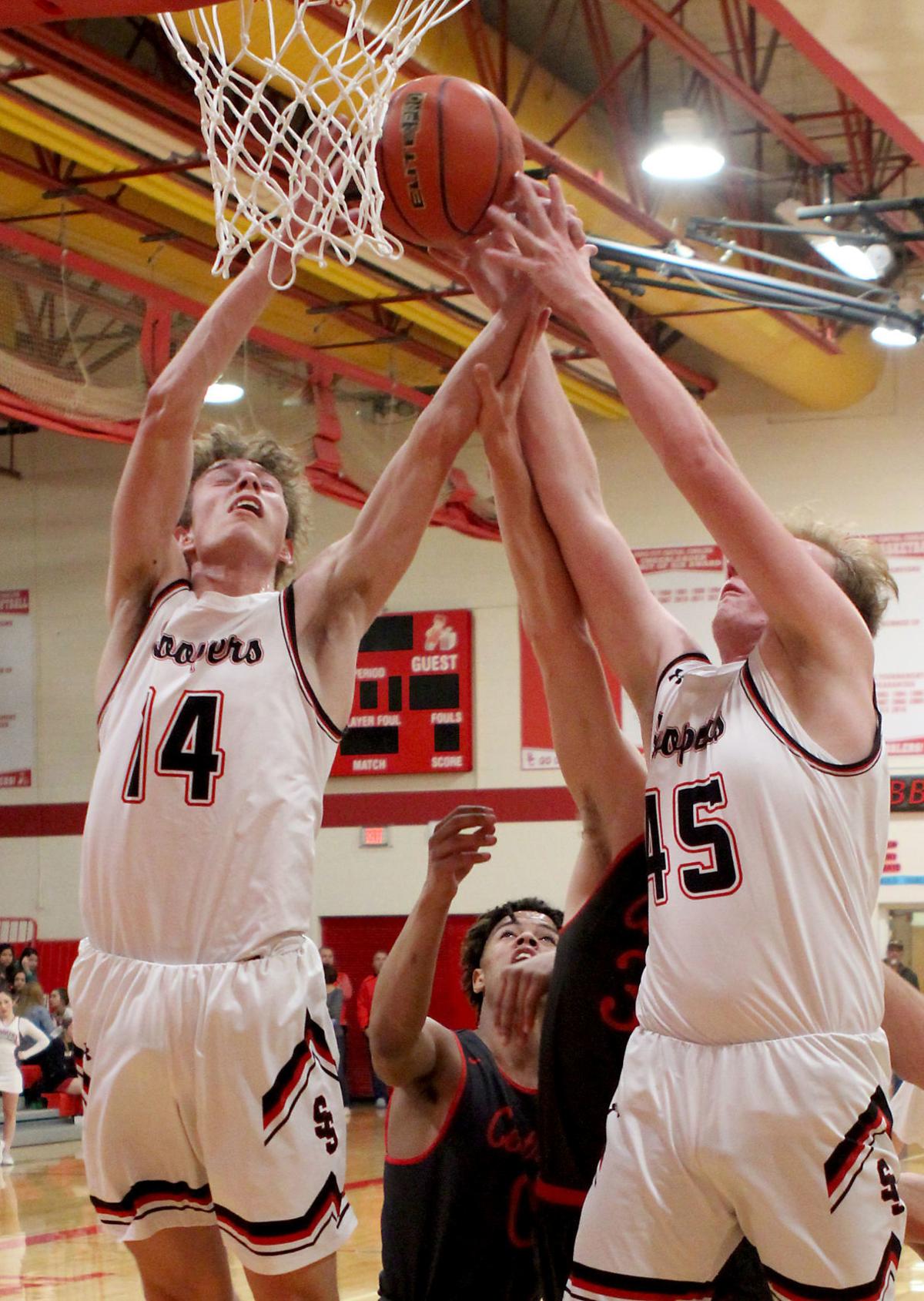 Sturgis' David Anderson and Ryder Ladner go up high for a defensive rebound Thursday night in the Scoopers' loss to Rapid City Central. 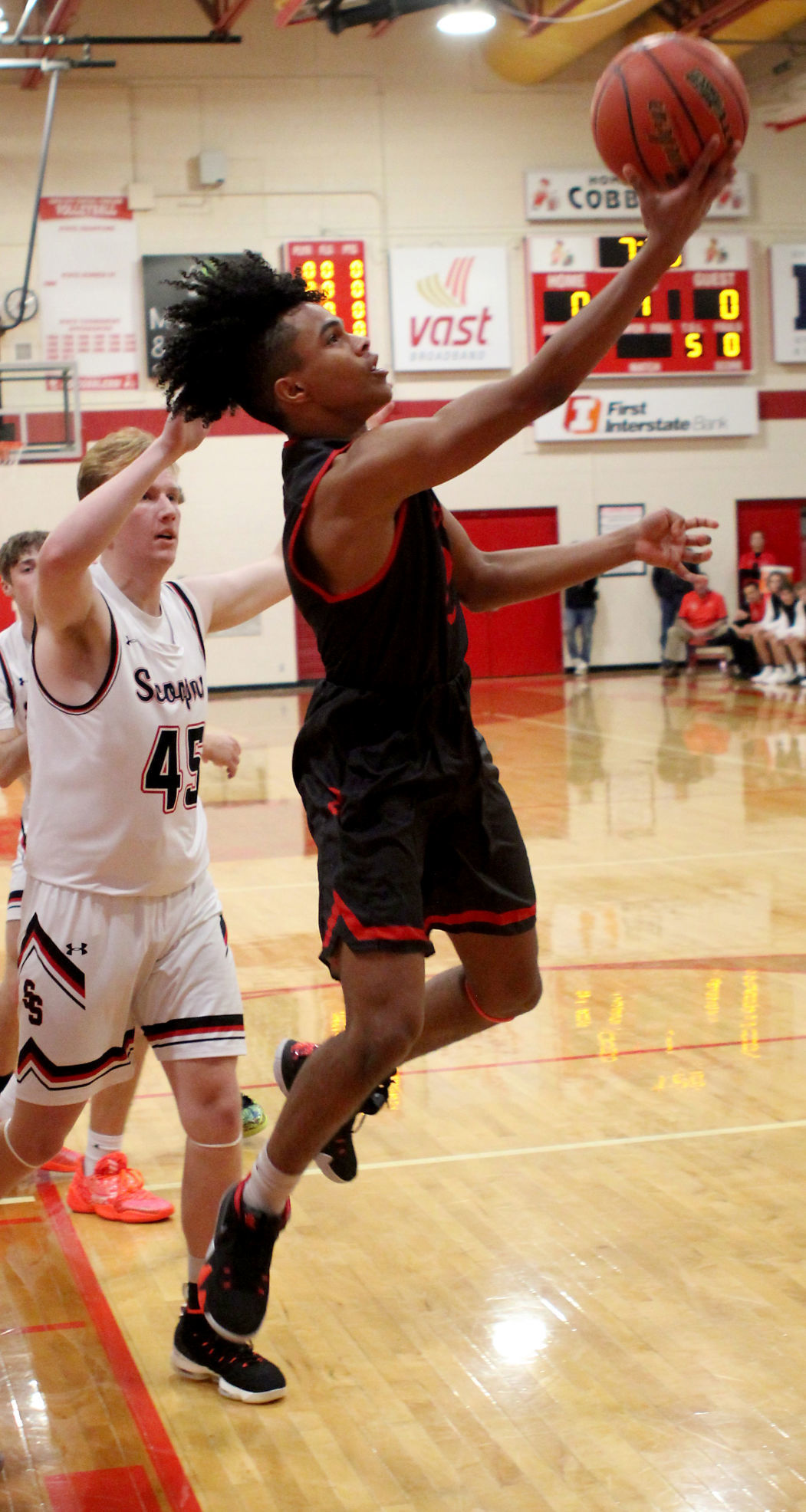 Cobbler point guard Julian Swallow flies to the basket for two points Thursday in a 61-44 win over Sturgis.

The Rapid City Central boys' basketball team might have gotten an encouraging pep talk at halftime, and it was defense that did the trick as the Cobblers rallied in the second half for a 61-44 win over Sturgis Brown Thursday night at Naasz Gymnasium.

The Scoopers had the hot hand from the outside and led a tight first half, 32-31 at the break after Central was up by one at the end of one.

But the Cobblers gave up just 12 second-half points and did enough on offense to win their fifth game in a row to move to 7-3 on the season.

It was all about a defensive adjustment on the screen and roll, Central coach TJ Hay said.

Central junior Micah Swallow, who led all scorers with 20 points, said they just had to listen to their coach — which they did — coming out in the third quarter.

"We just focused on what Coach was saying in the locker room because sometimes we get in our heads and stuff," Swallow said. "He just talks to us and encourages us to keep pushing and fighting. When we are out on the court, we just cheer each other on and help each other out."

The Scoopers stayed in the game and then led after 16 minutes because of a nice combination of outside and inside play. Sturgis hit 4-of-6 3-pointers in the first half — two by Ryder Ladner and one each by Marcus Myrick and Gabe Legner — and 12-of-18 overall from the field.

Those Central adjustments forced the Scoopers to miss all six of their 3-pointers in the second half and only connect on 5-of-22 overall from the field in the final 16 minutes.

The Cobblers also improved offensively, especially on the boards, as they turned several rebounds into points from Swallow, Robbie Weber and Erik Keohane. Weber and Keohane had four offensive rebounds each.

"We had some huge key offensive rebounds in the third quarter," Hay said. "That helped stretch it out to 10 or 12. We also shot better. In the first half we shot 36 percent. We weren't bad offensively in the first half, we just weren't good defensively."

Central outscored Sturgis 14-6 for a 45-38 lead going into the fourth and led by as much as 19 late in the contest.

Swallow was 7-of-16 from the field, with just one 3-pointer, while also dishing out three assists with five steals.

His brother Julian Swallow added 13 points and five assists, followed by 12 points from Kohl Meisman, who hit 3-of-5 3-pointers, and 10 points from Weber.

"I wasn't really shooting well, so I just started focusing up and started making my shots, but only layups because my 3s weren't dropping at all," Micah Swallow said.

Ladner led the Scoopers with 10 points, with Zach Shoun scoring eight and David Anderson and Myrick with seven each.

About halfway through the season, the Cobblers are on somewhat of a roll, winning their last five games. At the same time, Hay said they are still waiting to put a full game together, especially on defense.

"We're scoring 60-70 points a game, which is enough to win, but we can't give up wide open looks," Hay said. "We keep getting better and we stress that all week long, but we have a tough game (Friday) with Campbell County. They spread everybody out and shoot a ton of 3s, which for our big guys those are tough matchups. Those are 6-3 or 6-4 guys who play out on the perimeter."

Central is at Campbell County (Gillette, Wyo.) tonight at 8.

One dead, one injured after crash on icy road near Piedmont

One man is dead and another seriously injured after a rollover crash Tuesday night on an icy road in Meade County.

Central's Micah Swallow is fouled by Sturgis' Marcus Myrick as he drives to the basket in the Cobblers' win Thursday night.

Sturgis' David Anderson and Ryder Ladner go up high for a defensive rebound Thursday night in the Scoopers' loss to Rapid City Central.

Cobbler point guard Julian Swallow flies to the basket for two points Thursday in a 61-44 win over Sturgis.