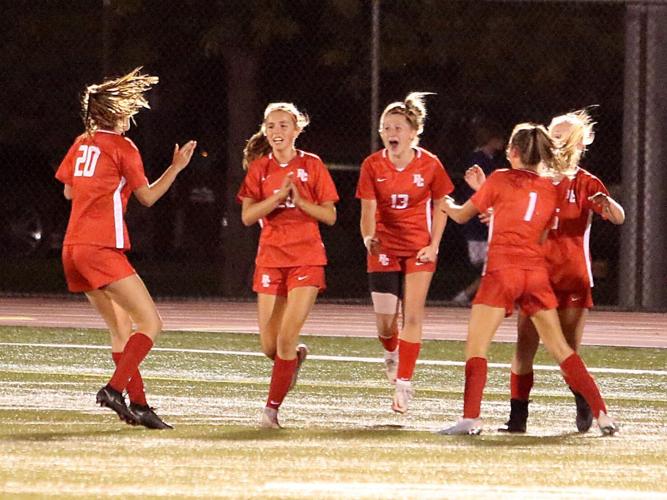 Rapid City Central freshman Kiley Mellum (13) celebrates with her teammates after scoring a late goal to give the Cobblers a 1-0 win over Rapid City Stevens on Tuesday at Sioux Park. 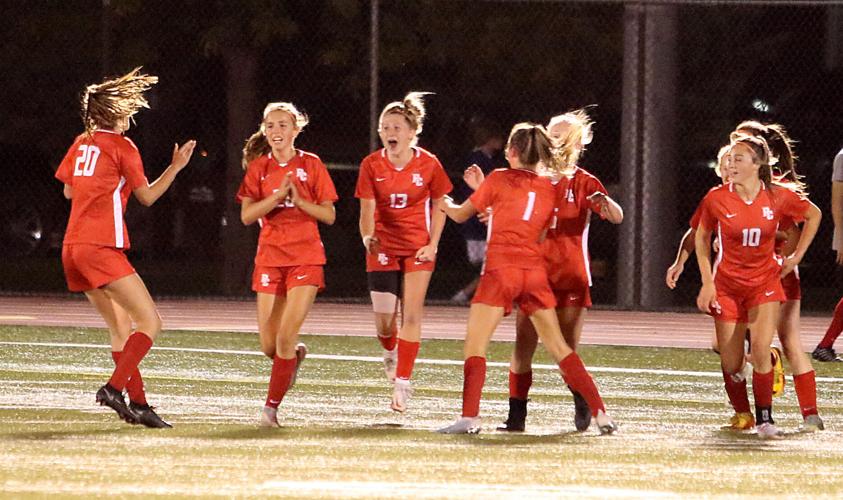 Rapid City Central freshman Kiley Mellum (13) celebrates with her teammates after scoring a late goal to give the Cobblers a 1-0 win over Rapid City Stevens at Sioux Park Tuesday night.

For 78 minutes Tuesday night, it looked as though another low-scoring rivalry matchup between the Rapid City Central and Rapid City Stevens girls soccer teams would end in a scoreless draw.

But in the 79th minute, freshman Kiley Mellum finally broke through, firing a shot 25 yards out from the middle of the Sioux Park stadium field that curved right and out of the outstretched arms of the Raiders goalkeeper, hitting the back of the net for the go-ahead goal.

“It’s bigger than just what a great shot it was,” Central head coach Mark Morgan said. “Kylie has continued to grow throughout this season, and for her to nail that shot was such a big confidence-builder for her. She’s been playing really well, but for her to get that shot was just fantastic.”

The late goal all but sealed a stunning 1-0 victory for the Cobblers, who avenged their loss to the Raiders two weeks ago with the same result and are now on a two-game winning streak for the first time this season.

“It was unreal. I kind of had mixed emotions,” Mellum said of her goal. “Finally beating Stevens this year just felt amazing.”

Joanna Williams, an eighth grader who was promoted from the JV squad to take over starting goalie duties, stopped all 11 shots that came her way to aid in the clean sheet. Central (3-5-2) has allowed only two goals in its last four games.

“It’s so special. It’s the time of my life being out here and playing with them, especially against our rival Stevens,” Williams said. “A 1-0 shutout win is just amazing.”

The Cobblers had no shortage of chances in the contest, finishing with 14 of 17 shots on net. The Raiders (6-4-0), meanwhile, who received votes in the latest coaches poll, ended with 20 shots, including a penalty kick in the 73rd minute that sailed wide right.

Stevens also saw its three-game winning streak snapped, though the goal it surrendered Tuesday is just the first out of its last four contests.

“Stevens, hats off to them. They’re a fantastic team. I love Stevens, and I love playing against them because they’re good for both of us,” Morgan said. “Being on this side of the state, we have to take what we get for competition, and for us to be able to play each twice at a high level nearly the end of the season prepares us for the postseason.”

“We really brought the intensity, we knew we wanted to win and we knew the last game was a really bad win,” Cox said. “We needed to make it better and we worked over practice, fixed a couple things and came out here ready to win.”

“I thought we played similarly to how we played last time, but we were a little more composed in the final third with our finishing. That made the difference,” Stevens head coach Jeff Fierro said. “We just found the net. We relaxed a bit in front of the net.”

Zack Williams, who has spent time at midfield and forward this season, played this mid in the contest and scored the first goal of the night in the 13th minute after missing a penalty kick off the right bar, the rebound coming to Sam Tschetter, who fed it back to Williams, who finished off the second chance.

Cox then tallied his first in the 16th minute in the box off a corner kick before Luther Busching finished off the half with a goal in the 37th minute to make it 3-0 at intermission.

Cox knocked in his second goal three minutes into the second half, then Tschetter capped off the rout with a goal in the 59th minute.

“Gabe is tenacious,” Fierro said. “It will seem like there is no reason for him not to get the ball as it's coming to him or he’s in a certain space. All of a sudden, he comes from out of nowhere, or he manages to work his body around the other guy and position himself to get the ball. He just makes things happen.”

The Raiders are now on a four-game winning streak and have outscored opponents 20-1 during that stretch.

“We’ve got a plan on how we want to develop, and right about now is when we start really working on our speed of play and our quality of shots and getting behind their defense,” Fierro said. “Things are coming together in a good way.”

Stevens travels to Box Elder on Thursday for a meeting with Douglas/Rapid City Christian/New Underwood, while Central battles Spearfish on the road Saturday.

Rapid City Central freshman Kiley Mellum (13) celebrates with her teammates after scoring a late goal to give the Cobblers a 1-0 win over Rapid City Stevens on Tuesday at Sioux Park. 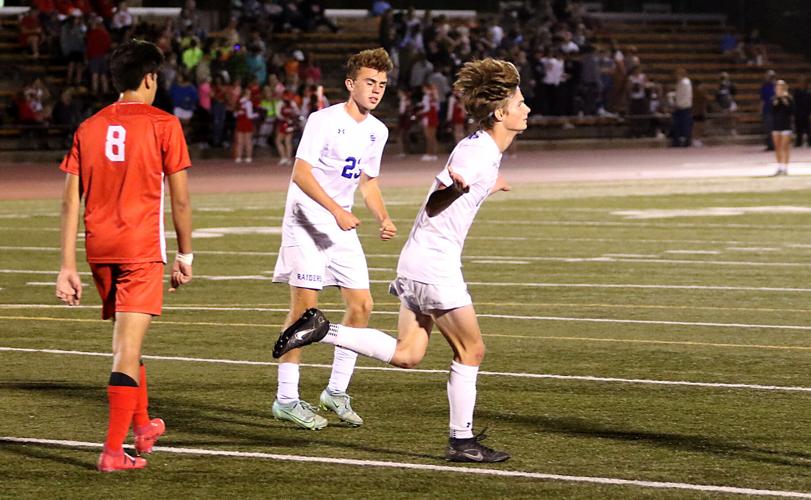 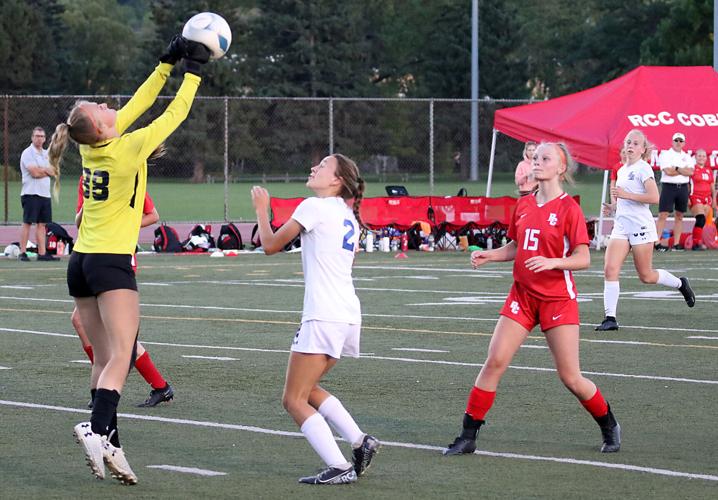 Rapid City Central freshman Kiley Mellum (13) celebrates with her teammates after scoring a late goal to give the Cobblers a 1-0 win over Rapid City Stevens at Sioux Park Tuesday night.