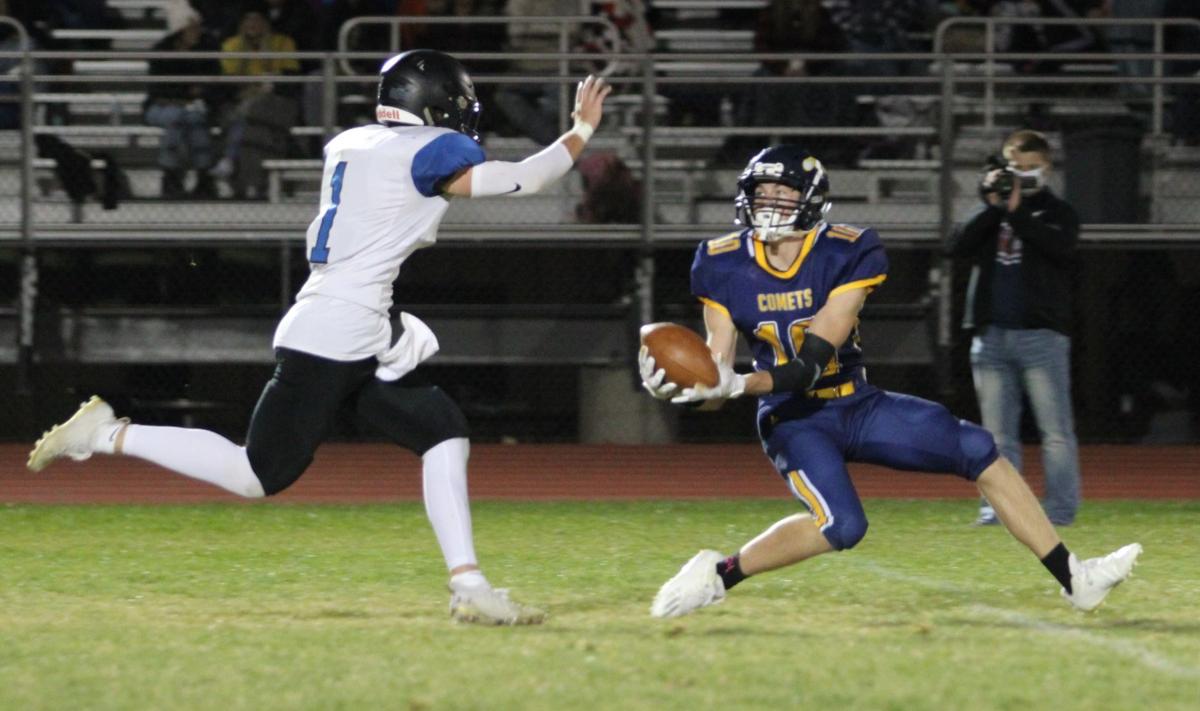 Rapid City Christian wide receiver Avery Wipf hauls in a reception for a first down on a 3rd and 10 play in the first half of the Comets' win over Jones County/White River Friday. 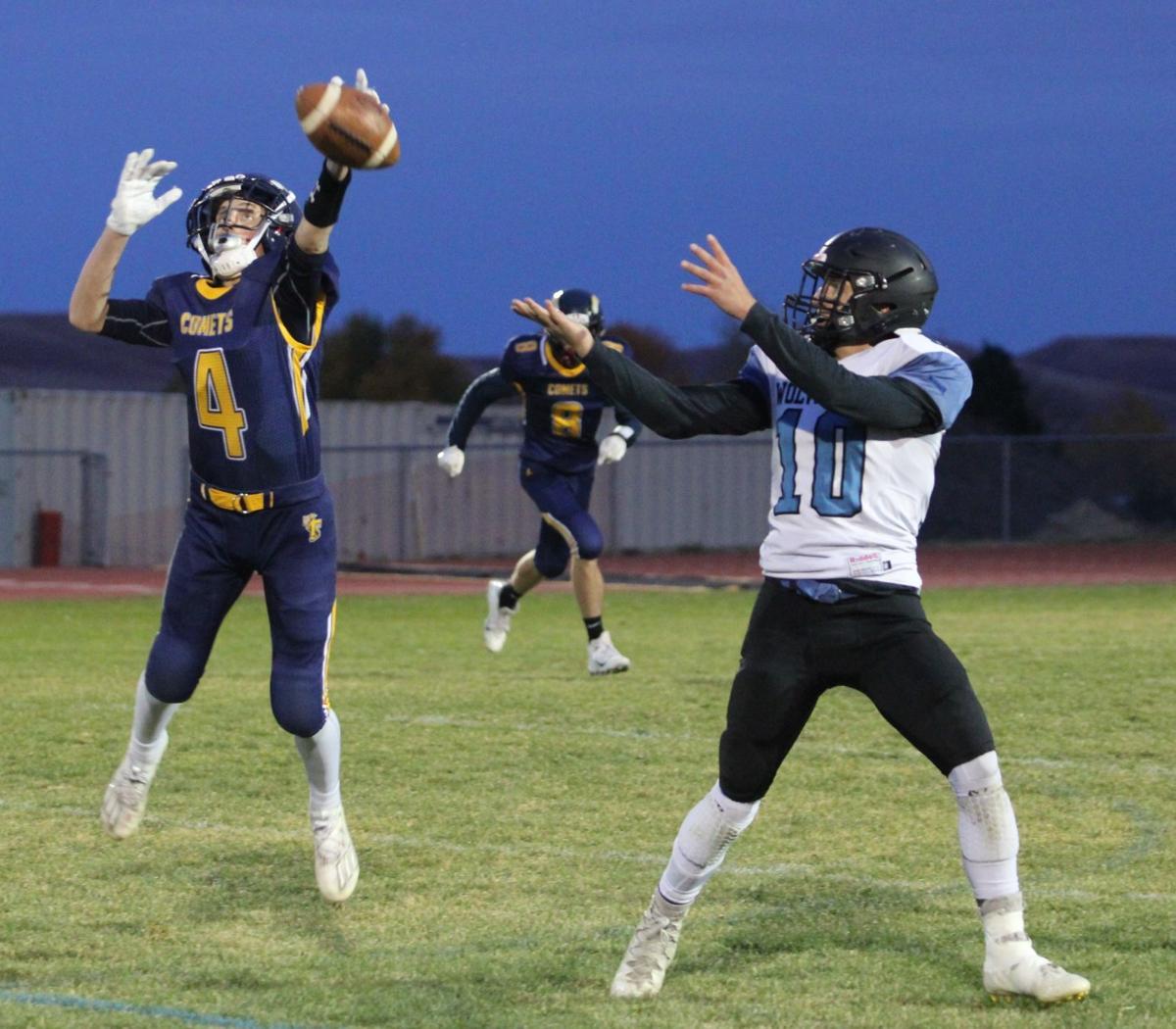 Rapid City Christian defensive back Wyatt Batie breaks up a pass in the first quarter of the Comets' win over Jones County/White River Friday night at hart Ranch.

The Rapid City Christian offense cut through the Jones Country/White River defense like a hot knife through butter and earned a home-playoff berth by thumping the Wolverines 56-8 Friday night at Hart Ranch.

With the win, the Comets are now the No. 2 seed in Region 4 and will face the same Jones County/White River squad, 3-5, Thursday at home in the first round of the 9AA playoffs.

Rapid City Christian, which has now won its last four games (including one forfeit win) after starting 0-5 under first-year head coach Ben Connot, scored five touchdowns on just 19 plays to open the game, leading 24-0 at the end of the first quarter and 40-8 at halftime.

"Our offense has been clicking lately," said Connot. "The last couple of weeks we have been able to get on rhythm ... our receivers, quarterback, the line getting their rhythm. When all aspects of the game are working, it is really good."

Senior quarterback Sam Schlabach guided the Comet offense with his hands on all seven touchdowns in the game, along with seven 2-point conversions.

"Coming out fast and hard, that's what we try to do every game," Schlabach said. "Executing plays well and working hard is our philosophy."

Rapid City Christian went into the game as the No. 3 seed, with Jones County/White River the No. 2 seed. The winner was likely going to host the first round of the playoffs.

It will be the first time Rapid City Christian has hosted a playoff game.

"There was some history on the line and this team wants to be special," Connot said. "They went to work during the summer and battled through all of the adversity that we faced during the year to get to this point. They did it and I'm very proud of them, and they deserved every bit of it."

After Mitchell Heidecker blocked a Wolverine punt on the first possession, the Comet offense went to work, scoring on the second play from scrimmage with a 35-yard touchdown pass from Schlabach to Presley Myers. On the first play, Schlabach scored on a long touchdown run that was called back because of a holding penalty.

No worries, Schlabach went through the air the next play.

After getting the ball back, the Comets scored on a three-play drive that also featured a TD that was called back because of a penalty. This time Schlabach kept it himself and ran it in from 42 yards out for the score that counted.

Rapid City Christian made it 24-0 in the opening quarter after a Schlabach interception. The score took just one play as he hit Avery Wipf from 63 yards out, the first of three touchdown receptions for Wipf.

The Comets made it 32-0 early in the second on a 42-yard connection between Schlabach and Wipf, before the Wolverines got on the scoreboard on an 11-yard TD pass from Colbe Scott to Wyatt Olson.

Christian came right back and made it 40-8 when Schlabach lifted a high pass over the Jones County/White defense for a 11-yard TD pass to Jackson DiBona.

The Comets closed the second half with a 16-yard TD run by Schlabach and a 29-yard touchdown pass to Wipf.

"Sam is a guy who is very experienced. He played quarterback the last couple of years here," Connot said. "When I was able to come here and get my hands on him, we've been able to work. He's made some great strides, and he has taken the team to the next level just with his consistency and accuracy."

Schlabach was 11 of 19 passing for 254 yards and five touchdowns. He also rushed the ball 11 times for 157 yards and two scores. Most of those rushes came on keepers, often up the middle. He also scored five 2-point conversions, mostly on that same keeper.

"My offensive line, I trust them," Schlabach said. "I trust my running back and we trust each other. When we see something, we make it happen."

"We have some guys who are really good basketball players who we can put out wide on the perimeter," Connot said. "Those type of guys thrive out in space, using their bodies to get open."

The Rapid City Christian defense might have been a bit overlooked in the game because of the offensive firepower, but it had a strong day with two interceptions and two fumble recoveries.

Connot said their motto on defense is bend, but don't break. For much of the game, they didn't even bend.

"Teams can drive the ball, but we have to be able to drive our heals in. If we can keep battling, those balls will eventually roll our way and we have to capitalize on those," he said.

Scott was 5 of 13 passing with 87 yards for the Wolverines, with all five receptions going to Olson. Jones County/White River had 142 yards on the ground with Garret Hatheway leading the way with 47 yards.

Although the brackets haven't been established at the Journal deadline, the playoffs begin Thursday, and these two teams will likely face off once again.

Schlabach said they will be ready.

Rapid City Christian wide receiver Avery Wipf hauls in a reception for a first down on a 3rd and 10 play in the first half of the Comets' win over Jones County/White River Friday.

Rapid City Christian defensive back Wyatt Batie breaks up a pass in the first quarter of the Comets' win over Jones County/White River Friday night at hart Ranch.