Members of the Rapid City Police Department and the Pennington County Sheriff's Office investigate shootings at the intersection of Anamosa and Greenbriar streets on Tuesday, August 2, 2011. Rapid City Police Officers Nick Armstrong and J. Ryan McCandless were killed in the shooting and officer Tim Doyle was wounded. (Ryan Soderlin/Journal staff) 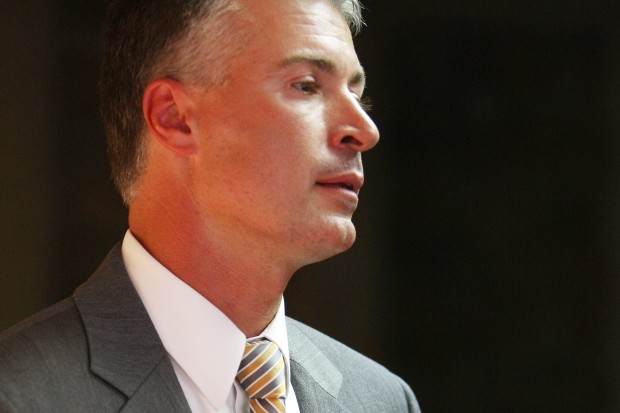 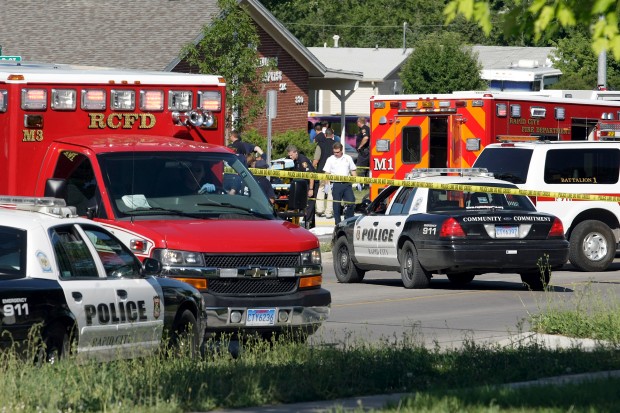 The man who killed two Rapid City police officers and wounded a third in a North Rapid shootout Aug. 2 was a suspect in a recent burglary and an armed robbery and had been arrested two weeks earlier for advancing on police with a concealed knife.

Daniel Tiger, 22, also had marijuana in his system and a blood alcohol level of .098, higher than allowed for driving, when he pulled a concealed .357-caliber revolver from his waistband and opened fire, a summary of a state investigation into the gunfight released Tuesday by Attorney General Marty Jackley said.

And the report said Tiger had previously told acquaintances that he would rather die than return to prison, where he had spent time in connection with a previous assault on law-enforcement officers.

But officers J. Ryan McCandless, Nick Armstrong and Tim Doyle were not aware of Tiger’s identity or the potential danger during what appeared to be a routine stop of Tiger and three companions for suspicious behavior and an open container of alcohol at about 4:20 p.m., Aug. 2, at the corner of East Anamosa and Greenbriar streets.

Nor were they prepared when, after a 10-minute encounter that witnesses in the report described as “very calm, non-confrontational with no physical contact” Tiger pulled the handgun and opened fire, the report said. The officers all had their weapons holstered when Tiger drew on them, witnesses – including Tiger’s companions -- agreed.

“This was very unprovoked,” Jackley said. “There was no physical contact. It was a very cordial conversation. The escalation came when the shooting suspect pulled a concealed weapon and began shooting.”

The 90-page report compiled by the state Division of Criminal Investigation summarized by Jackley gives a graphic account of the bloody gunplay, which was over in a matter of seconds but left McCandless, Armstrong and Tiger fatally wounded. Doyle, although knocked down with a serious wound to the side of the face, would recover and this week returned to work as a liaison officer at Central High School.

Jackley said Doyle’s account of the shooting was consistent with the accounts offered by Tiger’s three companions, none of whom has been implicated in the shooting. That consistency runs through information from other witnesses as well as “evidence at the scene,” Jackley said.

“What you had was evidence from the three people with Tiger, Officer Doyle and about 50 other witnesses,” he said. “Those other witnesses ranged from those whose houses were struck by bullets to those who heard things to those driving by who saw parts of it, to some not even at the scene.”

Two of those interviewed who weren’t at the scene gave indications that Tiger was in a downward spiral leading toward disaster. Both said Tiger, who had an extensive criminal record for a person in his early 20s, told them he would die before going back to prison. And one said Tiger lamented having “no job, no home, nothing to live for” and mentioned “suicide by cop.”

Jackley’s investigation summary said Tiger had been arrested about 15 times between January of 2007 and July of 2011, with at least three arrests involving threatening, assaulting or resisting a law enforcement officer. The background check also revealed that Tiger was a suspect in a recent middle school burglary and an armed robbery at a convenience store.

And in another incident, he had been arrested for approaching police officers with a concealed knife. The officers had responded to a call in an area where Tiger was living.

Rapid City Police Chief Steve Allender said Tuesday that in that incident, a police officer drew his gun and pointed it at Tiger, ordering him to drop the knife. Tiger did.

With that history, Jackley said it is possible that Tiger “thought the officers knew more than they did about his other issues” during the Aug. 2 stop. Tiger had become the focus of questioning in that stop, because he had an open bottle of vodka and was refusing to give his real name. Officers were allowing Tiger’s three companions to leave, but were continuing to question him when he pulled the gun.

One of Tiger’s companions gave a statement shortly after the shooting. Two others were detained briefly but left the scene in the chaos. They were located and interviewed the following morning, Jackley said.

“One of them actually assisted with CPR at the scene, which was confirmed by other witnesses,” Jackley said.

There is no indication at this time that Tiger’s companions knew he had a gun or what he might do with it. Jackley declined to give their names.

“It’s up to them whether they want to talk to people about this,” he said.

The investigation continues into the .357-caliber handgun Tiger used in the shooting, a Dan Wesson brand traced back to 1978, which was recovered after the shooting.

And as Tiger lay bleeding at the scene, he admitted to police and emergency personnel that he shot the officers, according to the report. He also told them he was sorry for what he did.

“While they were handcuffing him soon after the first responders arrived and secured the weapon, one of the officers asked who did it. And he said he did, and then he apologized,” Allender said. “It is bizarre. Somewhere in that bizarre, we stop trying to make sense out of it and shake our heads like everyone else.”

The DCI investigation sought to make as much sense and give as clear a picture of the shooting as possible, Jackley said. The DCI was assisted by the Pennington County Sheriff’s Office, and also by the FBI, the Drug Enforcement Administration, the Bureau of Alcohol, Firearms, Tobacco and Explosives, the South Dakota Highway Patrol and the U.S. Marshal’s Office.

The Rapid City Police Department was excluded from the investigation since it had officers involved. Allender said he got a summary from Jackley only after it was finished but prior to release Tuesday.

“We made it a point not to interact too much with the investigators,” Allender said. “I’m always worried about an appearance that I’m trying to help investigators come to a conclusion.”

Jackley said the witnesses and evidence did that, helping investigators reach a clear conclusion after a thorough review. Jackley said the investigation showed that the officers had acted professionally and appropriately prior to the point where Tiger pulled his gun. After that, the officers were “dealt a circumstance completely out of their control” and were “justified in firing their weapons and using lethal force,” Jackley said.

“This was a troubled individual who made bad decisions and placed three officers in a situation they could not control,” he said.

Jackley said the state and community of Rapid City will be “forever grateful” for the officers’ sacrifice. He also sent condolences to families of those who died, including Tiger’s family, who he said have cooperated with the investigation.

“It was during that time when all the focus was on the officers who died and their families, as it should have been,” Allender said. “But I kept thinking about Tiger’s family, and how they had lost a loved one, and what their grief was, too. I couldn’t get them off of my mind. I felt like I should go to see them.”

The family was welcoming, anguished and bewildered, Allender said.

“They’re suffering in all of this, too,” he said.

Photos from the funeral for Officer McCandless in Michigan on Thursday.

Photos from Thursday's funeral and procession for Officer Nick Armstrong.

Where the subjects were

The state Division of Criminal Investigation’s probe into the bloody Aug. 2 gunfight between three police officers and their assailant added p…

Members of the Rapid City Police Department and the Pennington County Sheriff's Office investigate shootings at the intersection of Anamosa and Greenbriar streets on Tuesday, August 2, 2011. Rapid City Police Officers Nick Armstrong and J. Ryan McCandless were killed in the shooting and officer Tim Doyle was wounded. (Ryan Soderlin/Journal staff)