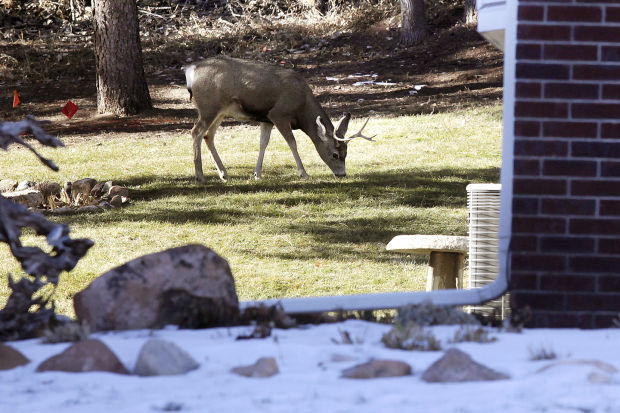 This deer enjoys a snack in a Rapid City yard. Deer venturing way into town is not uncommon, but can cause problems with gardens and collisions. 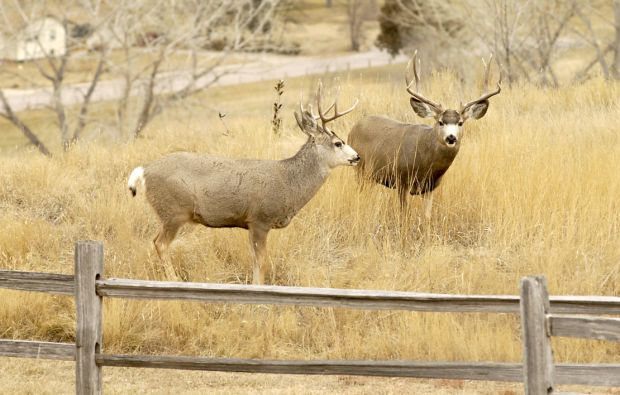 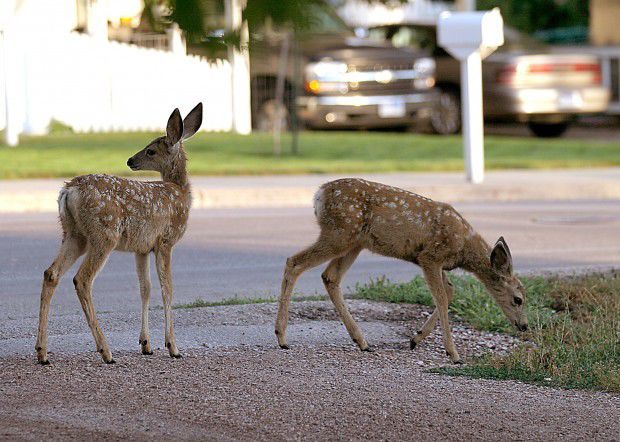 A pair of twin fawns make their way through the Chapel Valley neighborhood a few years ago. 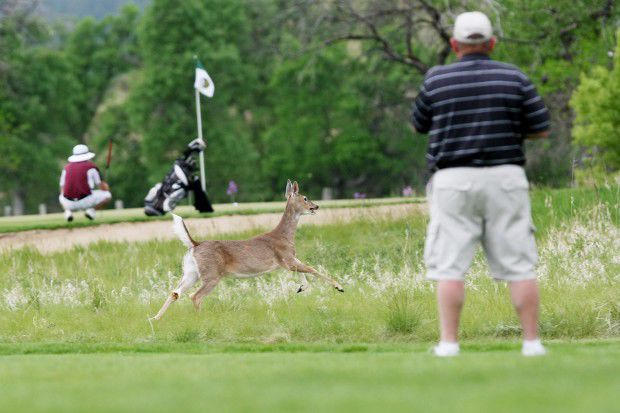 A deer crosses between fairways at Hart Ranch Golf Course in 2012.

Residents of Rapid City may have noticed some new visitors to their backyards.

Deer have been coming from the Black Hills into some areas of Rapid City, although the trend is not new, according to South Dakota Game Fish and Parks Resource Biologist Kris Cudmore.

Cudmore said depending on the conditions in the Black Hills, deer can travel into urban areas like Rapid City to find sources of food.

"It's variable about what's going on in the hills," he said. "Urban places do have areas for the deer to come in and have a perfect spot to rest and have all the food they need."

The areas where most deer are seen aren't too far from the nearby hills, according to Cudmore, but seeing deer in an urban environment isn't uncommon.

The easiest way to avoid having a deer problem in your backyard is to stop feeding any animal, according to Cudmore.

"A lot of problems are perceived problems," he said. "A lot of problems come from feeding animals, not necessarily deer, and one of the ways to alleviate those problems is to not feed anything, whether it be deer or other animals."

What are the problems with deer coming into urban areas? They can range from gardens to car crashes.

"Deer will get into gardens sometimes," Cudmore said. "We see some vehicle collisions. It's something we have to deal with around here because we have wild animals."

Cudmore said to the highest time for any animal darting out in front of on coming traffic is early morning and in the evening.

Deer migrating into urban populations isn't a bigger issue this year than in other years, according to Cudmore. He said there are population control methods the South Dakota Game Fish and Parks takes, but only as a last resort.

"There's a lot of rules and regulations, and we work closely with the city parks department," he said. "Police have a ban on firearms and archery in the city limits, and rightfully so, you have to keep safety in mind."

Cudmore said that is the heightened time when pets are in danger of being attacked by deer, but pets should still be kept on a leash at all times.

Deer have been known to attract many larger predators, but Cudmore said deer moving into Rapid City doesn't necessarily mean the predators, such as mountain lions, will follow them.

"It's possible, especially in outlying areas," he said. "Sometimes we get reports of coyotes or mountain lions, but they usually don't want human interaction."

Human interaction is one thing deer become more used to as they move into urban areas, and Cudmore reiterated that the best way to avoid attracting a herd of deer is to not try to feed other animals like birds.

"When they move into Rapid, they become less and less afraid of humans," he said. "It really comes down to not feeding anything outside."

This deer enjoys a snack in a Rapid City yard. Deer venturing way into town is not uncommon, but can cause problems with gardens and collisions.

A pair of twin fawns make their way through the Chapel Valley neighborhood a few years ago.

A deer crosses between fairways at Hart Ranch Golf Course in 2012.