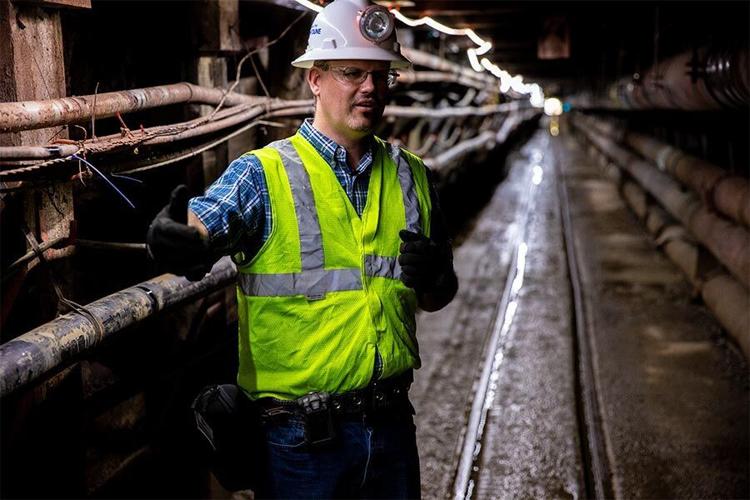 Joshua Willhite stands inside the Sanford Underground Research Facility near the location of the DUNE excavation that is currently taking place. 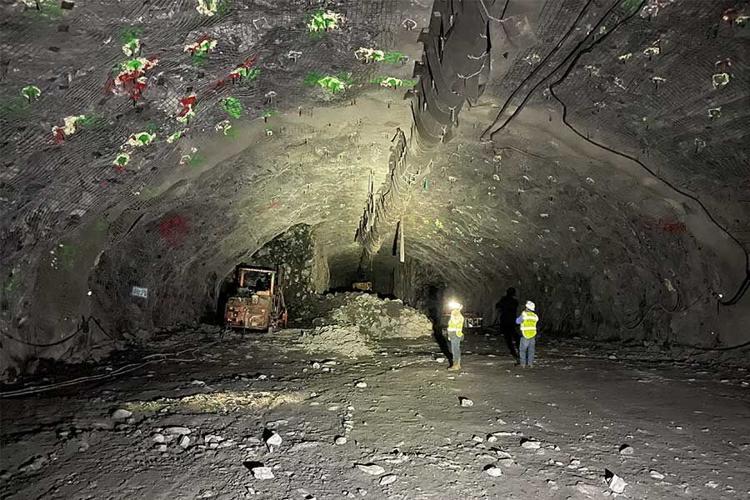 Two workers examine the top of one of the DUNE caverns now being excavated at the Sanford Underground Research Facility. Once completed, this cavern will be seven stories high.

Some magnificent sights are hard to capture well in photos that truly convey their grandeur and magnitude. Consider the gargantuan cliffs of Yosemite, the Great Pyramid of Giza or a sunrise over the Manhattan skyline. Soon, the caverns for the Deep Underground Neutrino Experiment, or DUNE, will be added to that list. The DUNE is being built under the Black Hills of South Dakota at the Sanford Underground Research Facility.

“The DUNE caverns are mind-bogglingly big. There is no question about it,” said Joshua Willhite, one of the engineers leading the DUNE excavation and a South Dakota Mines mechanical engineering graduate. “It’s impossible to wrap your mind around it without being there. I can show you all the pictures and diagrams, but without actually seeing it, you can’t truly fathom an opening that big underground."

DUNE will become the world’s largest physics experiment in the study of neutrinos.

Willhite is an engineer at the U.S. Department of Energy’s Fermi National Accelerator Laboratory, which leads the DUNE project. He is the project manager for the infrastructure being installed for DUNE in the former Homestake Mine. He said there are other caverns of similar or larger size on Earth that are closer to the surface, but nothing the size of DUNE has ever been done at this depth, 4,850 feet below ground.

“Every bit of air that is underground has to come down through one shaft and go back out another shaft, and this requires management of air movement,” Willhite said. At the 4,850 level of SURF, the natural temperature of the surrounding rock walls is 95 degrees, so ventilation for air conditioning is key.

“We don’t do anything to generate excess heat underground,” he said.

Water cannot be taken for granted in the DUNE construction. Pumping water between the surface and the construction site to install a bathroom would require almost 2,200 pounds per square inch of pressure. Engineers like Willhite have broken down the plumbing that supplies water to DUNE into a series of stepped segments to reduce the pressure needed by individual pumps.

“It still requires a lot of power to pump water back out. Because of these challenges, we try to limit water use wherever possible,” Willhite said.

Heavy equipment like excavators and front-end loaders and construction materials like long steel beams that are normally a part of any construction operation are not so easy to come by at DUNE.

“These massive caverns take huge equipment. But we are supplied by mine shafts that are not that much bigger than a normal elevator, and there is no piece of excavation equipment that will fit in an elevator, so we have to disassemble the equipment at the surface and reassemble it at depth,” Willhite said.

The rock being excavated from these large caverns must be placed back on conveyances and moved to the surface.

The size and complexity of the DUNE construction are not the only mind-blowing details about the project. The facility, funded by the U.S. Department of Energy, is a true international project that includes 1,000 scientists and engineers from more than 30 countries around the world. The large caverns of DUNE will hold massive tanks of liquid argon that will detect the neutrinos coming in from a beam generated at Fermilab in Illinois. Argon liquifies at about 300 degrees below zero Fahrenheit. Willhite will help with the construction of two tanks, which will be the size of five-story buildings and will each hold 17,000 tons of -300 degree liquid argon.

“To maintain that temperature, we use a large nitrogen generator and refrigeration system to create liquid nitrogen at -320°F,” Willhite said.

The liquid nitrogen will be used to help cool the argon.

“Aside from the ridiculously cold temperature, when these liquids boil, they expand over 700 times their volume. There is nothing inherently hazardous about argon gas except it displaces any oxygen. We have to ensure that this expansion is minimized, controlled and ventilated properly for worker safety,” he said.

For Willhite, the engineering challenges at DUNE are part of what make it a fulfilling project.

“We’re working with world-renowned engineering firms in the design and construction of this project,” he said.

In 2010, Willhite was invited to work at the site that would become SURF. Today, he is more excited about the future of the area than ever.

“I think the Black Hills has always been known for natural beauty and tourism and not so much for professional job opportunities. I think this project at SURF and other developments are changing that,” he said.

In 2021, crews at Sanford Underground Research Facility in Lead completed an amazing feat: stabilizing a large section of the Yates Shaft in j…

Sanford Underground Research Facility in Lead is the deepest underground laboratory in the United States — and among the deepest in the world.

Nicole Mehlhaff grew up in the shadow of three volcanoes: Mount Rainier, Mount St. Helens and Mount Adams, all just over an hour’s drive from …

Since 1997, visitors to The Journey Museum and Learning Center in Rapid City have explored the Black Hills area through the lenses of history,…

LBNF/DUNE excavation achieves a gem of a milestone

SURF plans for the next 20 years

What will underground science look like in 20 years? And how can Sanford Underground Research Facility in Lead remain a destination for physic…

Bench warrant issued for man who fled from police

Joshua Willhite stands inside the Sanford Underground Research Facility near the location of the DUNE excavation that is currently taking place.

Two workers examine the top of one of the DUNE caverns now being excavated at the Sanford Underground Research Facility. Once completed, this cavern will be seven stories high.