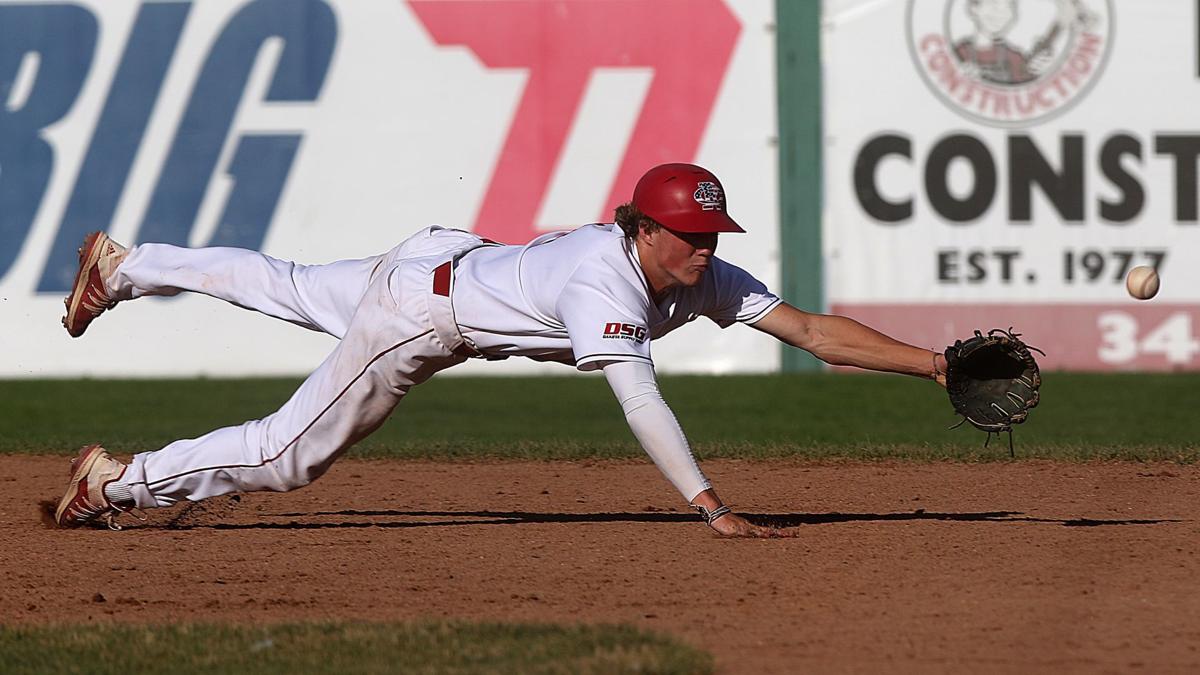 A groundball bounces just out of the reach of a diving Colton Hartford, shortstop for Rapid City Post 22, during the Hardhats’ game against Premier West, Colo., as a part of the second day of action Thursday in the 45th annual Firecracker Tournament at Fitzgerald Stadium. 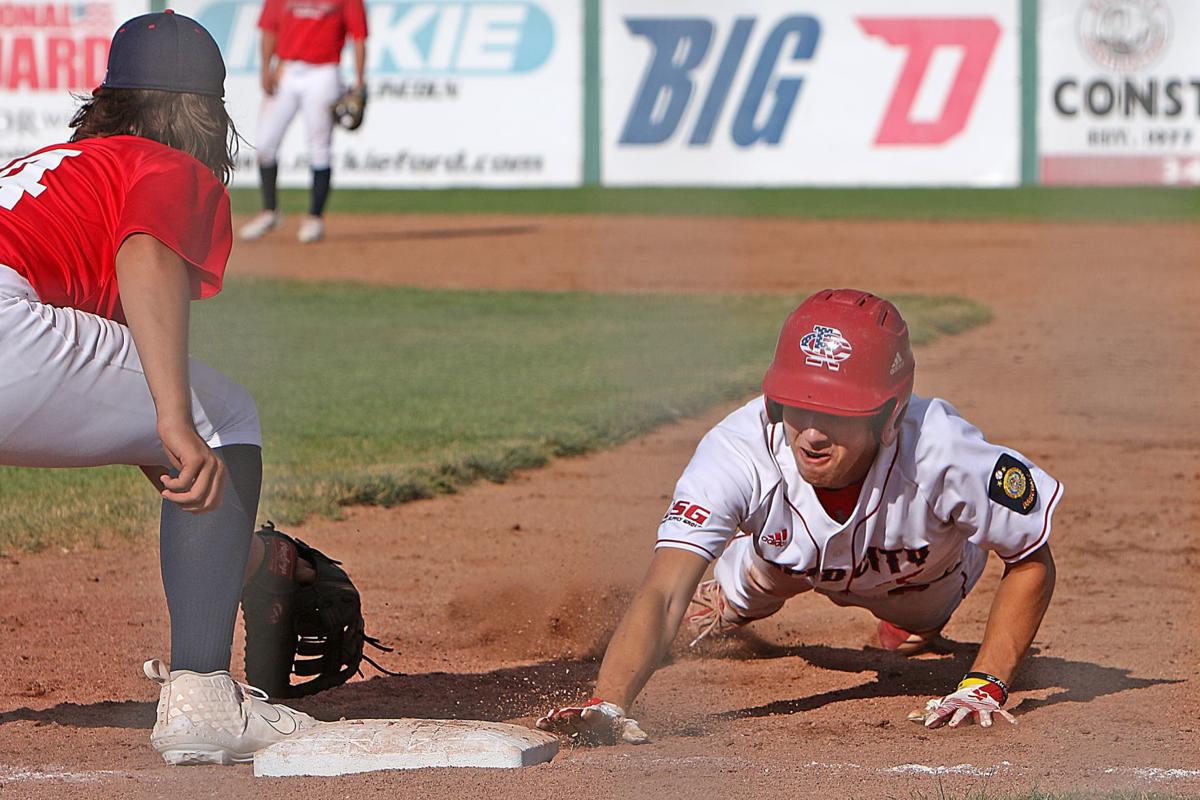 Rapid City Post 22 baserunner Drew Scherbenske dives back into first base to beat a pick-off throw during the Hardhats’ game against Premier West, Colo., on Thursday during action on the second day of the 45th annual Firecracker Tournament at Fitzgerald Stadium. 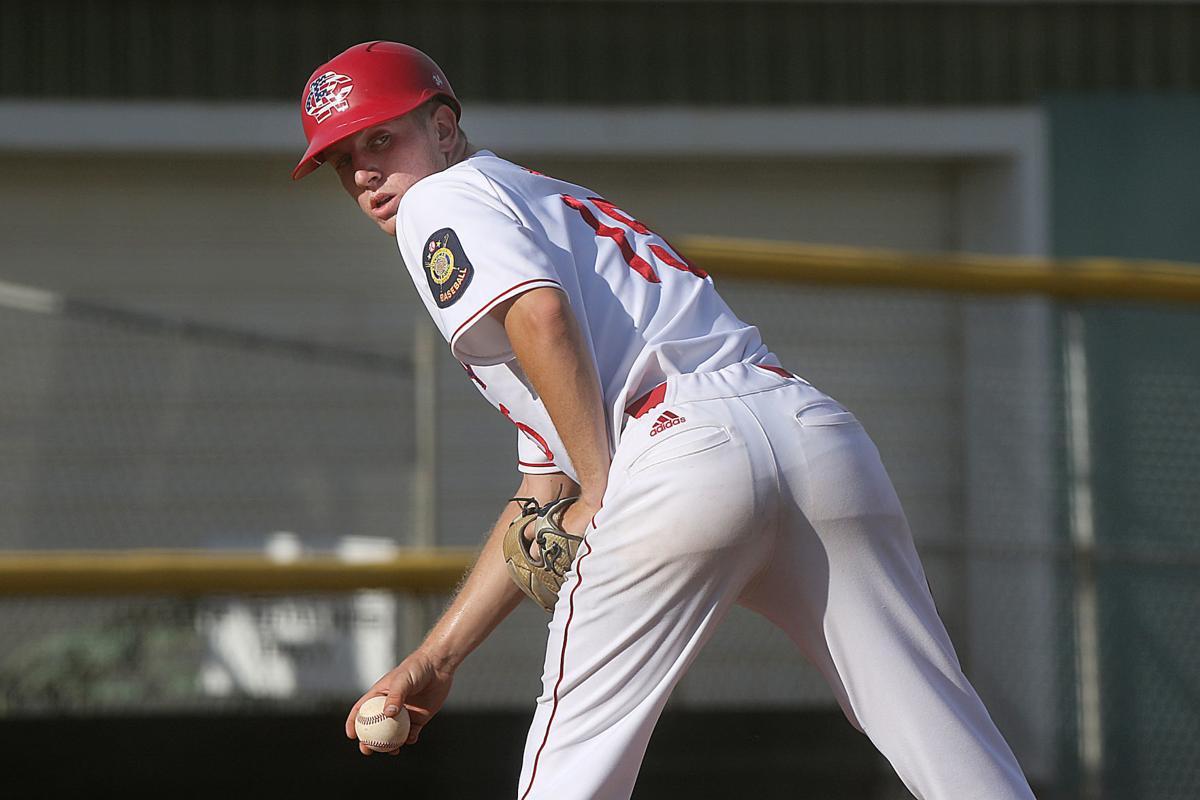 Rapid City Post 22 starting pitcher Troy Wilhelm looks to first base to check on a baserunner during the Hardhats’ game against Premier West, Colo., on Thursday during play in the second day of the 45th annual Firecracker Tournament at Fitzgerald Stadium.

It wasn't like Eli Oxner was miffed or really motivated when Premier West intentionally walked hard-hitting Jake Goble to get to the Rapid City Post 22 youngster.

He was just doing his job when he laced a double to right center field, lifting the Hardhats to a sloppy 10-9 win over the Cardinals Thursday night in the Firecracker Tournament on Dave Ploof Field at Fitzgerald Stadium.

"I came in and had to do what I had to do, which was finish the game," Oxner said. "Any of us could have done it, but I was just the one that was up at the end of the game."

Post 22 made it a sweep on the night, beating Sterling, Colo., 14-1 in five innings in a late game that didn't start until about 9 p.m.

Against Premier West in the bottom of the eighth, Ryan Bachman was on second after a walk and wild pitch. The Cardinals elected to let Goble go to first base without a pitch for the force and get to Oxner.

It was the smart thing to do, Post 22 head coach Kelvin Torve said.

"Goble is a cleanup hitter, 6-4 and 230, and he hits the ball a long way," he said. "Eli is a defensive replacement, so it was predicatable, classic baseball move, and Eli made them pay. Kudos to Eli, he ended this crappy baseball game, and God bless him."

The game was basically the exact opposite of a baseball clinic. There were 53 total baserunners — 32 hits, eight errors, 12 walks and one hit batsman. There were also six wild pitches and several passed balls and a total of 360 pitches thrown by seven pitchers.

Torve said the Hardhats did one thing right, and that was win the game.

"Other than that, we played atrocious. We had no energy, we made baserunning mistakes, the pitching was bad, we took way too many fastballs," he said. "The list of negative things goes on and on. But, at the end of the eighth inning, we won. There is something to be said for that.""

Oxner, who has spent most of his time this summer with the junior varsity Expos, came in during the fifth inning as a defensive replacement. He had just three at bats and one hit on the varsity level going into the game.

Friday, he reached base all three times with two hits and a walk.

"I was with the Expos and I got pulled up, and I just had to show out when I got the opportunity," he said.

With one out, the Cardinals got on the board when Connor Hardman walked and moved to second on a single by Hayes Eden, scoring on a single by Elias Fiddler. A hit-by-pitch to Jacob Frazzini, followed by a RBI bloop single by Aaron Brake made it 2-0.

Post 22 took the lead in the bottom of the second when Edens, Premier West's catcher, uncorked two wild throws. Isaac Arnold was trying to steal third and sc ored on the first throwing error. Peyton Tipton was on second and scored when Thomas Maguire struck out with a passed ball and Edens' throw was high and wide to first.

Post 22 made it 4-2 in the third inning when Ryan Bachman singled, stole second and third and scored on a passed ball.

Kadin Nelson came in to pitch in the fourth and immediately got in trouble, walking the first hitter and giving up two singles. His errant pickoff at first scored Ben Spengler. After Gabbert was caught at home trying a double steal, Edens hit a RBI single to tie the game at 4-4.

Frazzini's RBI single put the Cardinals back in front and Marcus Burton's single made it 6-4, still with the bases loaded and only one out. Hartford came in to pitch for the first time this season and induced a fly ball for the second out, and Frazzini, at third, was called for leaving early for the double play.

Hartford helped his own cause in the bottom of the fourth on a RBI double, scoring Maguire, who had singled and stole second and third.

Premier West, however, got that run back on a RBI double by Edens.

The Hardhats needed some offense and got it in the bottom of the fifth when Bachman walked and Goble singled. Goble was caught in a pickle between first and second, but Bachman scored on the play to make it 7-6. Oxner, who had singled, was left on third to keep it a one-run game.

Post 22 regained the lead in a long bottom of the sixth on a RBI single by Drew Scherbenske and an error on Goble's groundout to third, scoring Scherbenske.

In the top of the seventh, the Cardinals took an 9-8 lead with doubles by Edens and Fiddler, with Fiddler also scoring on an error by Bachman at shortstop.

On cue, Post 22 tied the game in the bottom of the seventh when Tipton and Jenson doubled.

Hartford led the Hardhats with three hits and two RBI, while Scherbenske, Goble, Oxner and Jenson all had two hits.

Edens had a big game for Premier West with four hits and two RBI, while Frazzini and Brakel had three hits each, Gabbert and Fiiddler two hits apiece.

Against Sterling, the Post 22 bats came out early and jumped out to an 11-0 lead after two innings, scoring eight runs in the second. Post 22 had seven hits, but also drew nine walks.

"It all started with Hunter Tillery pounding the strike zone," Torve said. "He came out and had energy, throwing strikes and got them out one, two, three. Both of their pitchers had trouble throwing strikes and we showed good discipline at the plate and did what we were supposed to do in that situation."

Hartford had two hits and two RBI, while Tipton hit a three-run home run in the third inning and drove home four in the game.

Although the Hardhats earned the sweep, they ended the day on a much more positive note.

"We won two games, there's not much you can argue with there," Torve said. "Hopefully tomorrow we'll be a lot more mentally prepared than we were in the first game today."

In the first game of the day, the Gillette Riders earned a hard-fought 5-4 walkoff win over the Missoula Mavericks.

Gillette led 4-3 until Missoula tied the game with a run in the top of the seventh.

The Riders answered when Kaden Race walked, moved to second on a bunt single by Hayden Sylte and to third on a passed ball, scoring the winning run on another passed ball.

Mason Powell led the Riders with a pair of hims, including a solo home run in  the bottom of the fourth. Charlie Kirgan hit a two-run home run for Missoula in the top of the fourth.

The game between Gillette and Rocky Mountain was moved to 9:30 a.m. Friday because of rain, lightning and hail.

A Rapid City employee driving a pickup hit a person who was lying down on the bike path on Monday morning.

Fewer than 10 COVID-19 cases have been reported to the state health department associated with Camp Judson, state epidemiologist Derrick Haski…

A groundball bounces just out of the reach of a diving Colton Hartford, shortstop for Rapid City Post 22, during the Hardhats’ game against Premier West, Colo., as a part of the second day of action Thursday in the 45th annual Firecracker Tournament at Fitzgerald Stadium.

Rapid City Post 22 baserunner Drew Scherbenske dives back into first base to beat a pick-off throw during the Hardhats’ game against Premier West, Colo., on Thursday during action on the second day of the 45th annual Firecracker Tournament at Fitzgerald Stadium.

Rapid City Post 22 starting pitcher Troy Wilhelm looks to first base to check on a baserunner during the Hardhats’ game against Premier West, Colo., on Thursday during play in the second day of the 45th annual Firecracker Tournament at Fitzgerald Stadium.