More than 150 people turned out for the uranium mining forum Thursday night at the American Legion in Hot Springs. 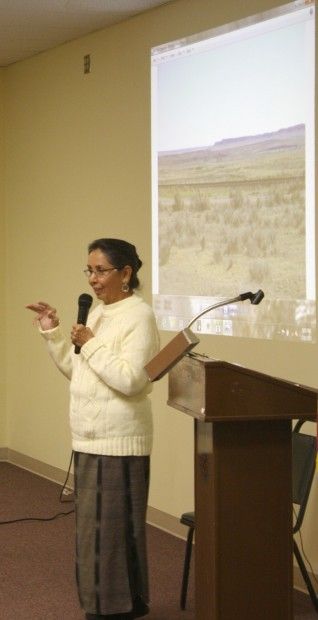 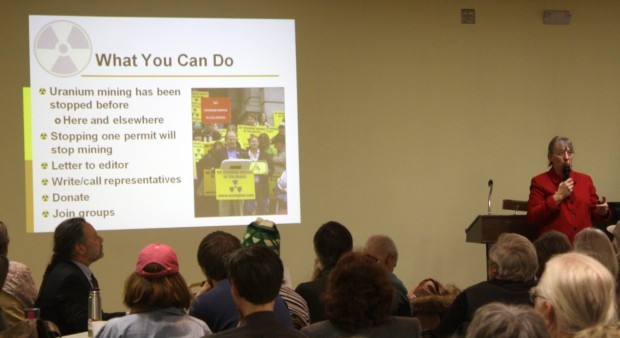 Dr. Lillias Jarding of Rapid City shares concerns for the safety of in situ uranium mining with the audience at a public forum at the American Legion in Hot Springs on Thursday night.Curt Nettinga, Hot Springs Star

HOT SPRINGS | Opponents of a proposed uranium mine were told Thursday night the project threatens Native American sites and the quality of drinking water in southwestern South Dakota.

“You look at this picture and see the prairie, but I look at this area and I see ancient burial sites,” said Charmaine White Face, coordinator of the Defenders of the Black Hills and one of three speakers who addressed the crowd of more than 150 at the American Legion.

Those in attendance are concerned about a plan by Powertech Inc., a Canadian-based mining company that wants to mine about 150 acres north of Edgemont by using in situ mining, a process that uses injection-recovery wells to extract uranium from ore formations hundreds of feet under the ground. It is a process that has raised questions about radioactivity and potential water degradation underground.

On Thursday night in Hot Springs, those concerns were amplified at the forum held by the Rapid City-based Clean Drinking Water Alliance.

Bruce Ellison, the organization’s counsel, said his group is now in litigation with Cameco, the company operating an in situ uranium mining operation at Crow Butte, Neb.

“We have been pursuing this company — a Canadian company like Powertech — for five years without a hearing,” he said. “This is part of their history.”

Ellison also said that Powertech officials convinced the South Dakota Legislature in 2011 to pass Senate Bill 158, which took away oversight of in situ mining by the Department of Environment and Natural Resources.

“Why?” Ellison said. “If they are going to do things the right way, if they will maintain the integrity of our drinking water and maintain the aquifers, why do they have to get the laws changed to relax the oversight?”

Ellison said his organization is working to bring some of the state’s past laws back into existence.

“Colorado now has laws that are similar to what ours used to be,” he said. “Powertech tried getting permits in Colorado but couldn’t, so they came here. They see us as suckers and easy marks.”

Ellison also said that DENR hearings on the two water permits requested by Powertech will take place West River, as would a hearing on the mining permit by the Nuclear Regulatory Commission.

“We are trying to make sure that those hearings take place right here in Hot Springs,” he said. “We will have a wonderful opportunity to let our voices be heard.”

White Face said the project threatens Native American sites and that she has concerns about the regulatory process.

“We have so little trust for the federal government. Native gravesites have been exploited for generations,” she said. “That’s why our THPO (Tribal Historic Preservation Office) has opposed any mining at this site.”

Dr. Lillias Jarding, the third speaker at the event, urged the crowd to take on Powertech’s proposed project.

“Uranium mining has been stopped before and it must be again,” she said.

More than 150 people turned out for the uranium mining forum Thursday night at the American Legion in Hot Springs.

Dr. Lillias Jarding of Rapid City shares concerns for the safety of in situ uranium mining with the audience at a public forum at the American Legion in Hot Springs on Thursday night.Curt Nettinga, Hot Springs Star 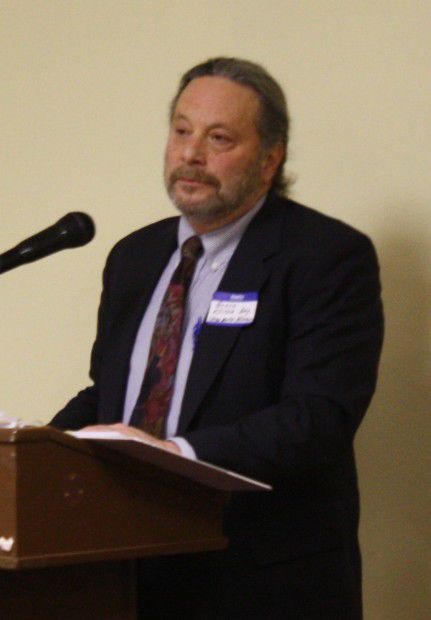