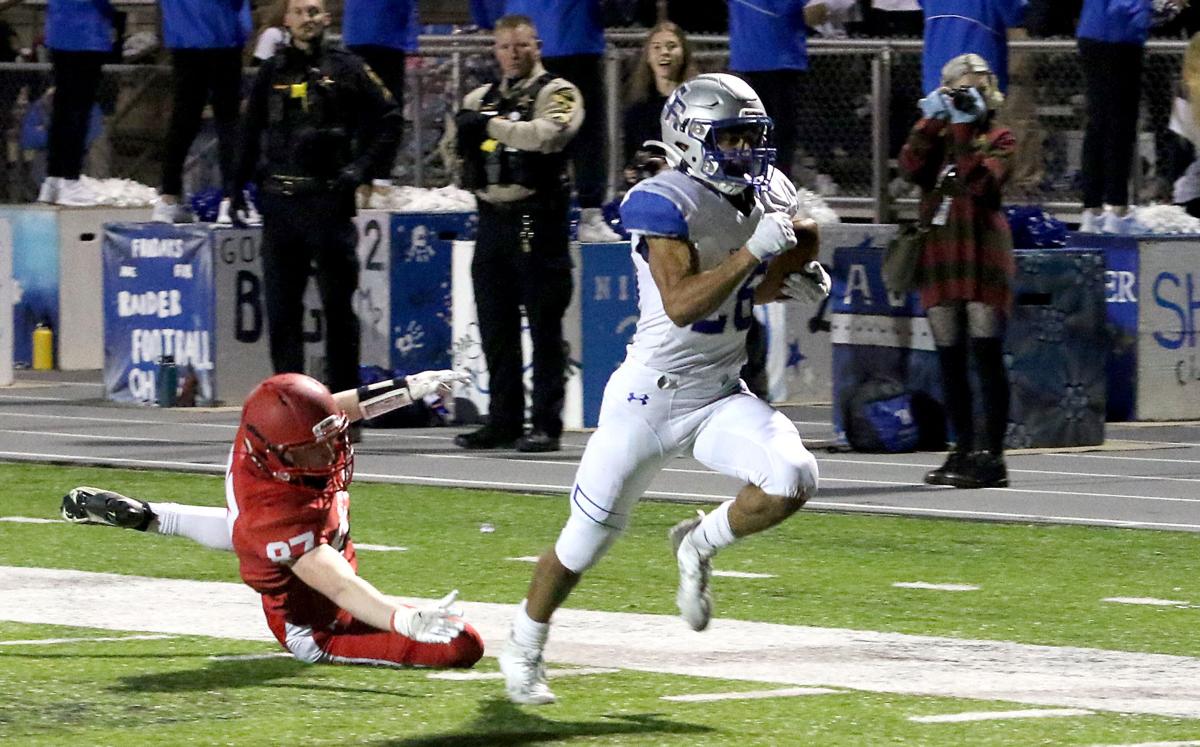 Raider running back Uriah Glynn beats the final Cobbler defender on a long touchdown run Thursday night. Glynn had five rushing touchdowns and one receiving touchdown for Stevens in in 49-0 win to seal a playoff spot. 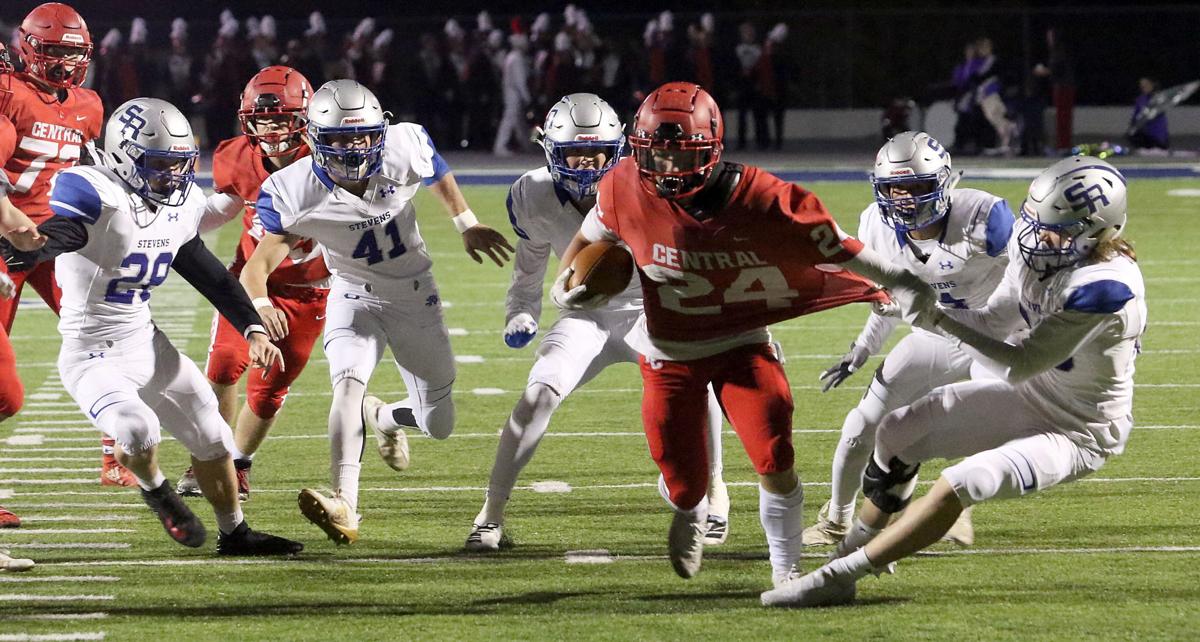 Rapid City Stevens senior Myles Schmaltz holds on to the jersey of Central kick returner Lane Darrow until the rest of the coverage team could arrive.

Raider running back Uriah Glynn beats the final Cobbler defender on a long touchdown run Thursday night. Glynn had five rushing touchdowns and one receiving touchdown for Stevens in their 49-0 win to seal a playoff spot. 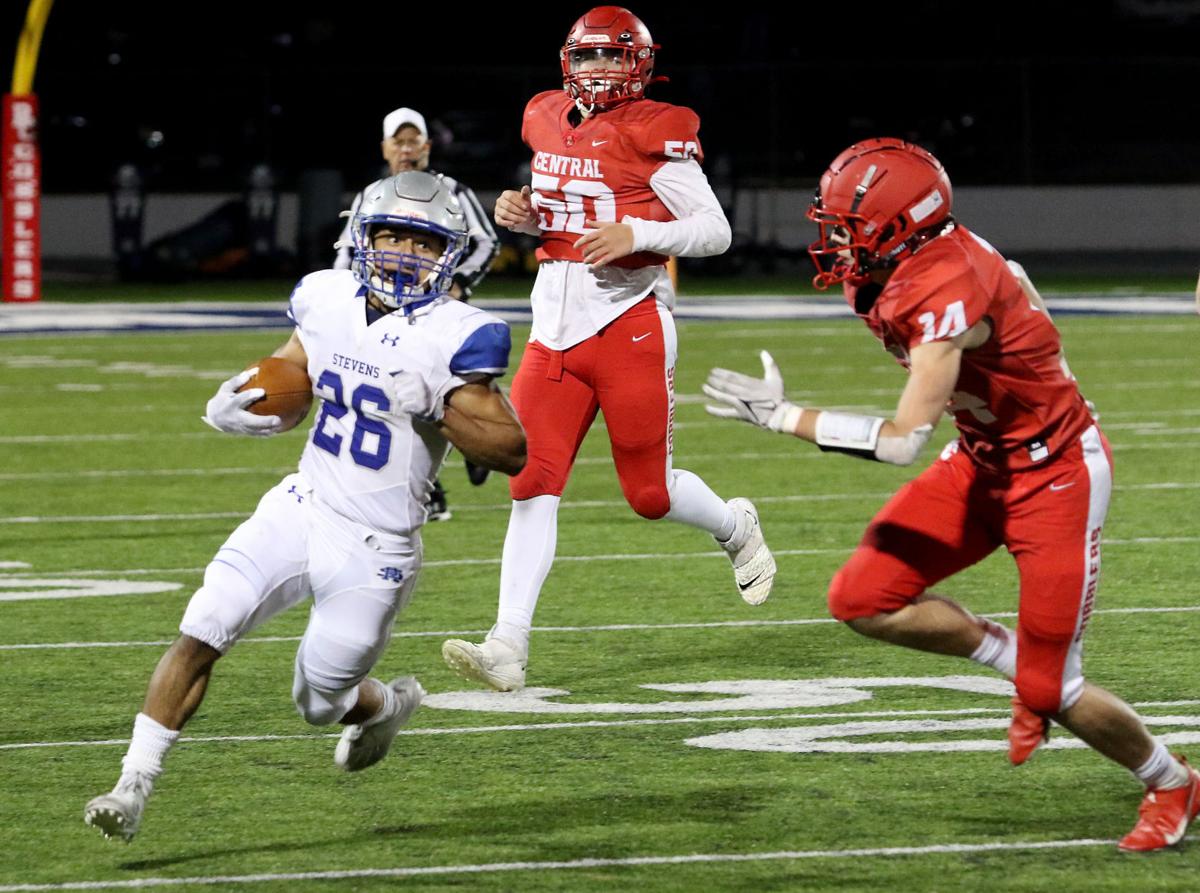 Raider running back Uriah Glynn gets the corner on a long run Thursday night. Glynn had five rushing touchdowns and one receiving touchdown for Stevens in their 49-0 win to seal a playoff spot. 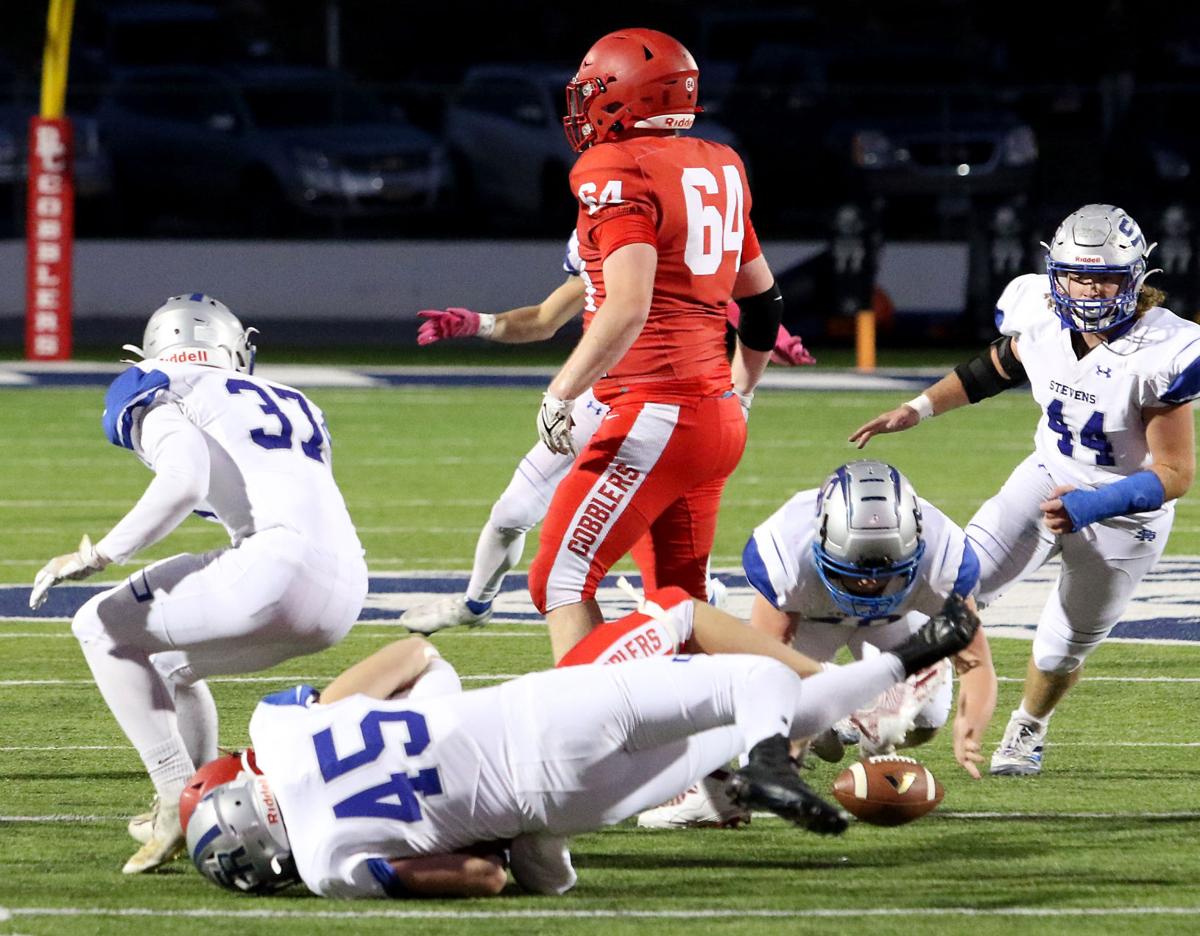 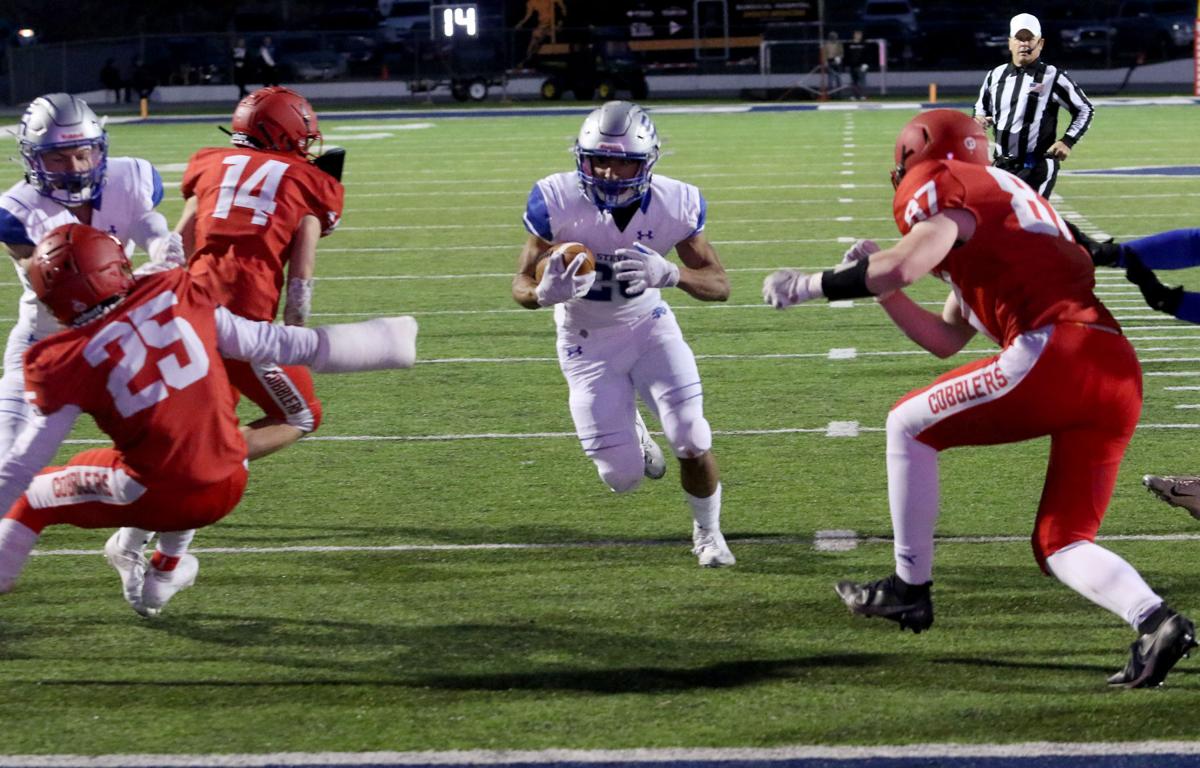 Raider running back Uriah Glynn busts through a bi hole on touchdown run Thursday night. Glynn had five rushing touchdowns and one receiving touchdown for Stevens in their 49-0 win to seal a playoff spot.

Uriah Glynn watched some tape this week of his coach, Michael Scott, when Scott played, and then went out and ran for over 200 yards, scoring six touchdowns, as Rapid City Stevens kept its season alive with a 49-0 win over rival Rapid City Central Thursday night at O'Harra Stadium.

The winner of the game was going to the Class AAA playoffs, while the loser was done for the season. Glynn and the Raiders made sure they were going to continue on, and will go in as the No. 8 seed, facing No. 1 Harrisburg next Thursday in Harrisburg.

After a scoreless first quarter, Glynn scored four times in the second and Stevens jumped out to a basically insurmountable 28-0 advantage at halftime. The Raiders defense forced five turnovers by the Cobblers in the game – four fumbles – and the offense scored on all but one of the miscues.

“Tonight, the Raiders came out and played solid football on both sides of the ball, even on special teams,” Scott said. “I told them all week, and before the game, if we came out and played one play at a time, and we executed, we had a real good chance of being victorious.”

Glynn, who went into the season with some high expectations and statewide notoriety, had struggled at times this season, but not on Thursday. He would go on to touch the football 16 times for unofficially 246 total yards of offense, scoring six touchdowns.

“I feel like in the beginning of the season when I was trying to find holes, I would be anticipating and holding in the backfield too long,” Glynn said. “Coach Scott, he was telling me that I just need to plant my foot and get downhill. He showed me a few of his highlights when he would do that, and I was like, ‘Yeah, I really have to do that,' so I was working on that.”

Scott talked to his seniors at a team dinner Wednesday night and told them — he said selfishly — that he wasn’t ready for the season to end for them.

“I told them, ‘I love this game and I need this game a lot more than you think I do.’ I challenged them to come out and play their hardest and just play their game, and they did just that,” he said.

Glynn is one of those seniors that Scott coached when he first joined the Raiders as an assistant. He said Thursday's performance was extra special to see.

“I absolutely love the kid. He is one of those when I first got the opportunity to coach at Stevens as the running backs coach, he was one of my first backs,” he said. “I challenged him. I said, ‘Uriah, sometimes we have to fight through adversity.’ We haven’t always been able to create the running lanes, but when we have, he has taken advantage of it. The special ones, they find a way. I told him that we were going to run him a lot tonight, and he said, ‘coach, I am ready, just give me the opportunity.’”

The Cobblers, who would have moved into the eighth spot with a win because of the head-to-head, stayed tough for the first quarter, holding the Raiders to punts on their first two possessions.

Taking over after Stevens recovered a Central fumble on the 28-yard line, Glynn had a 23-yard run to the 5 and scored on the next play, only to have to the play nullified by a holding call. The Raiders would stall and turn the ball over on downs on the 4.

But three plays later the Cobblers fumbled again and Glynn quickly scored his first of six TDs on a 13-yard run.

Another Central lost fumble on its own 23 led to a Raider touchdown. Quarterback Jed Jenson had a 23-yard TD pass to Easton Ogle called back because of a holding call, but Jenson came back to Ogle for a 31-yard reception to the 2 and Glynn scored his second touchdown from 2 yards out.

The Cobblers had their best chance to score after a nice kickoff return by Lane Darrow to mid field, along with a penalty, starting on the Stevens 35. But driving inside the 20, Central lost another fumble on the 19. Glynn capped a five-play, 81-yard drive with a 32-yard touchdown pass from Jenson for a 21-0 Raider lead with 3:32 remaining in the second.

That looked to be the score at halftime, but with the ball near midfield with just a handful of seconds remaining, it was enough for Glynn and the Raiders. Glynn scored for the fourth time in the opening half with just six seconds remaining on a nifty 54-yard run, seemingly avoiding tacklers up the middle and then down the left sideline for the score.

“Coach said, ‘hey, just run it again and see what you can do with it,’” Glynn said. “I just read the holes and my wide receivers were blocking for me. I read their butts like Coach told me all week. That is something I hadn't been doing at times this season. I finally did that and it worked out.”

If that wasn’t the deflating play of the game, the next one was as Carter Doney took the second-half kickoff 84 yards for the score before Glynn scored two more times, first on a 3-yard run, and on the first play of the fourth quarter from 36 yards out.

The first-half turnovers were killers for the Cobblers, head coach Neal Cruce said.

“Taking care of the football was huge. It (turning the ball over) is something that you can’t do,” he said. “The one thing that Stevens did is they capitalized on every single one of them. That is something that really takes the wind out of a high school team’s sails. When you can’t seem to catch a break at all, then it starts to really deflate the confidence of kids.”

Cruce added that the loss was on his shoulders.

The Raiders finished with 328 total yards on offense and held the Cobblers unofficially to 68 yards. Darrow led Central in rushing with 59 yards on 14 carries and sophomore quarterback Ryan Wetch was 5-of-16 passing for 18 yards.

“The defense is pretty much the heart and soul of any football team, and when they come out and play like they played tonight with five turnovers, the chances of us being victorious is really high,” Scott said. “They came out and created turnovers and we were able to capitalize on them on offense. Hats off, they pitched a shutout and that is super darn awesome.”

Jenson finished 7-of-13 passing for 106 yards, with Julian Scott catching three passes for 28 yards and Glynn two catches for 46 yards.

Stevens, 3-6, will now get to play another day in the Class AAA playoffs.

“I told them (teammates) I don’t want to go out now. It’s my senior year and we have more games to prove ourselves,” Glynn said. “I feel like a lot of people have been doubting us and I feel we can keep building and use the momentum.”

A bizarre twist! Cotton candy was invented by who?

A bizarre twist! Cotton candy was invented by who?

This Jordanian sanitation worker is a TikTok star

This Jordanian sanitation worker is a TikTok star

Raider running back Uriah Glynn beats the final Cobbler defender on a long touchdown run Thursday night. Glynn had five rushing touchdowns and one receiving touchdown for Stevens in in 49-0 win to seal a playoff spot.

Rapid City Stevens senior Myles Schmaltz holds on to the jersey of Central kick returner Lane Darrow until the rest of the coverage team could arrive.

Raider running back Uriah Glynn beats the final Cobbler defender on a long touchdown run Thursday night. Glynn had five rushing touchdowns and one receiving touchdown for Stevens in their 49-0 win to seal a playoff spot.

Raider running back Uriah Glynn gets the corner on a long run Thursday night. Glynn had five rushing touchdowns and one receiving touchdown for Stevens in their 49-0 win to seal a playoff spot.

Raider running back Uriah Glynn busts through a bi hole on touchdown run Thursday night. Glynn had five rushing touchdowns and one receiving touchdown for Stevens in their 49-0 win to seal a playoff spot.