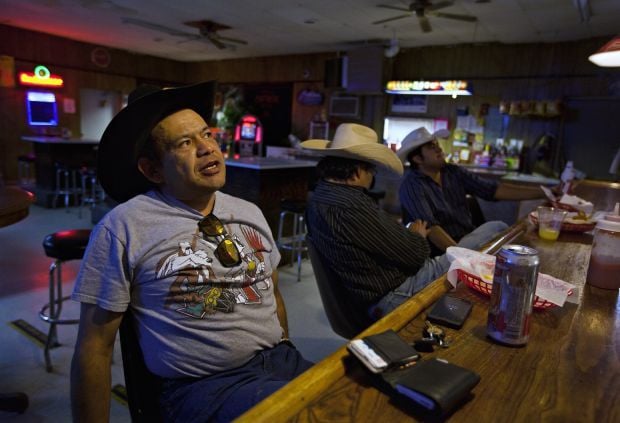 Gerry Runnels of Colorado, sits at the Swett Tavern while keeping out of the heat on Thursday in Swett, SD. Runnels said that he and his friends would hang out in the parking lot of the tavern drinking soda and eating chips while they were kids. 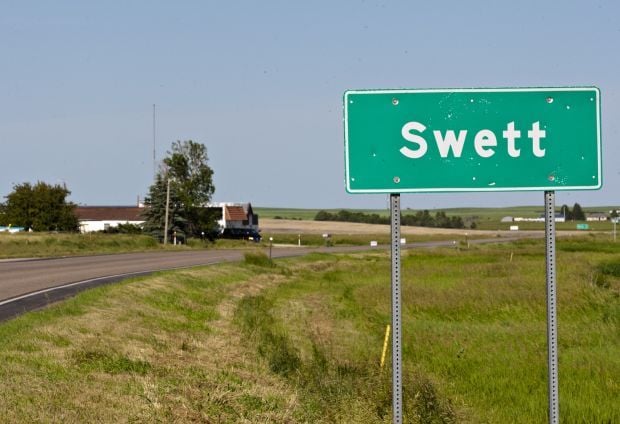 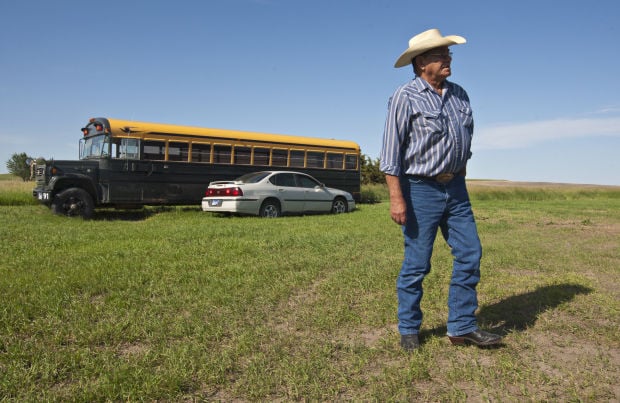 Wayne Witt, a volunteer manager at Swett Tavern, stands in front of a bus and an Impala while touring the small property of Swett, S.D., which is up for sale.

Have you ever dreamed of owning your own town, or just taking a ride around town knowing all you see is really yours?

Lance Benson, the sole owner of Swett, an unincorporated hamlet in Bennett County about two hours southeast of Rapid City, is putting the whole town up for grabs: including its bar, workshop, three trailers, single house, and 6.16 acres of prime prairie real estate.

Benson, the owner of a travelling concession business, said that while he would love to keep the town, he wanted to focus on his core business.

"Like I say, I hate to get rid of it," said Benson, who listed his town for sale with Rapid City Coldwell Banker, LKH Real Estate agent Stacie Montgomery last week. "If I don't sell it, if I don't sell it this first year, I would probably keep it."

Like many rural towns in America, Swett has shrunk dramatically over the past century as its inhabitants migrated to urban centers. Once a town of about 40 people in the 1940s — with a post office, a few houses, and a grocery store — the town now stands as little more than a few ramshackle buildings along U.S. Highway 18.

Ownership of property in the town concentrated during that decline, eventually falling to a single person. The town changed hands a few times before Benson bought it in 1998. He signed it over to his ex-wife in a divorce, but reclaimed the town around 2012.

Today, with Benson and his new wife living in a house beside the Swett Tavern, the town's population officially stands at two.

"And Daisy, that makes three," joked Wayne Witt, a friend of Benson's, referring to the couple's rottweiler mix.

But although the town's fortunes have waned, its tavern has remained its beating heart. As the only watering hole in a 2-mile radius, the Swett Tavern is still the defacto gathering place for a small army of local cowboys and wheatgrowers.

On Thursday, the beer was flowing and the pool cues were well-chalked as a family of horse-trainers from Batesland sought refuge from the afternoon heat.

"This place is pretty much where the highway ends and the Wild West begins," joked 47-year old Gerry Runnels, his fingers wrapped around a cold bottle of Budweiser.

Runnels is a third generation patron at the Swett Tavern. It was at this bar that his grandfather drank, where his father would wile away the hours playing Keno, and where, at age seven, barely able to see over the table's edge, Runnels learned to play pool.

Although Runnels has watched ownership of the town change over the years, its bar has always maintained a distinctly local veneer; a place where cowboy hats are de rigueur and rusted wagon wheels adorn the front facade.

It's a legacy that also, at times, has included a reputation for attracting rough customers. Runnels still remembers the words of an Oklahoman, traveling through the area, who stopped by for a drink.

"He said you need a Bowie knife to get in this place and a chainsaw to get out," Runnels said with a laugh.

Fortunately, under Benson's ownership,the Swett Tavern has cleaned up its image in recent years.

"It's now kind of a place you can come in and have a meal with your family rather than defend your family," said Ray Runnels, Gerry's 27-year old nephew, who sat at the bar with a tequila sunrise.

Although the atmosphere might be friendlier in the bar, whether the town sells or doesn't sell, at least these locals hope it doesn't lose its Western charm.

Gerry Runnels, downing the last drops of his Budwesier, still laughs at the memory of another man, a refined friend from Seattle, who he first introduced to the Swett Tavern.

"He said, 'this looks like a good place to be killed'. And I said, 'you could be killed anywhere, Randy. You could get killed at home feeding your furless cats, at least here it will be exciting'."

[Editor's note: This story has been changed to reflect a correction, Boondocks Bar & Grill in Martin is located two miles from Swett.]

Who would buy a town?

Swett isn't the first unincorporated community to be put up for sale in South Dakota. In 2011, the town of Scenic, about an hour southeast of Rapid City, was put on the selling block for $799,000.

The town was largely owned by Twila Merril, a woman who slowly acquired the town's property as it fell on hard times. Merril eventually sold Scenic to a Filipino church for $700,000, called Iglesia Ni Cristo, which has done little with the town since its purchase. The church has never publicly commented on why it bought the town.

How do I buy Swett?

Gerry Runnels of Colorado, sits at the Swett Tavern while keeping out of the heat on Thursday in Swett, SD. Runnels said that he and his friends would hang out in the parking lot of the tavern drinking soda and eating chips while they were kids.

Wayne Witt, a volunteer manager at Swett Tavern, stands in front of a bus and an Impala while touring the small property of Swett, S.D., which is up for sale.