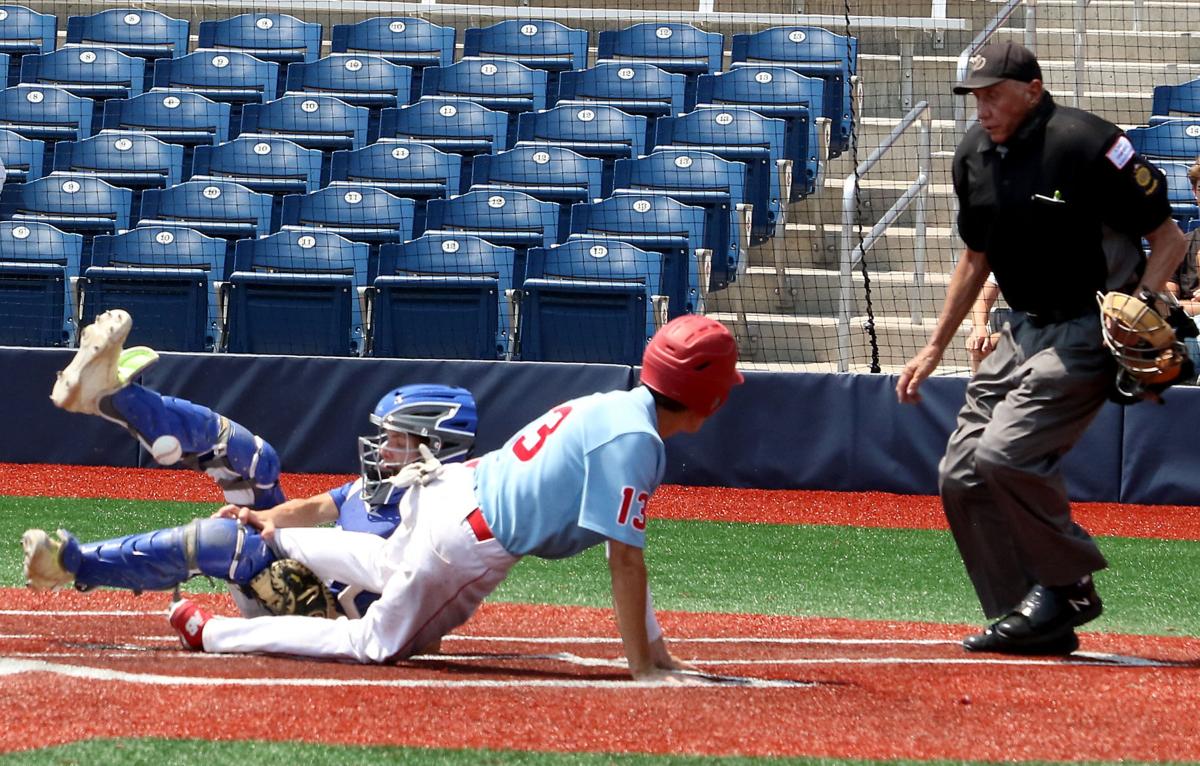 Hunter Tillery jars the ball loose from the Renner Post 307 catcher on a play at the plate after he tagged up on a short fly ball in foul ground. Tillery scored the fifth run in a 6-3 Post 22 win. 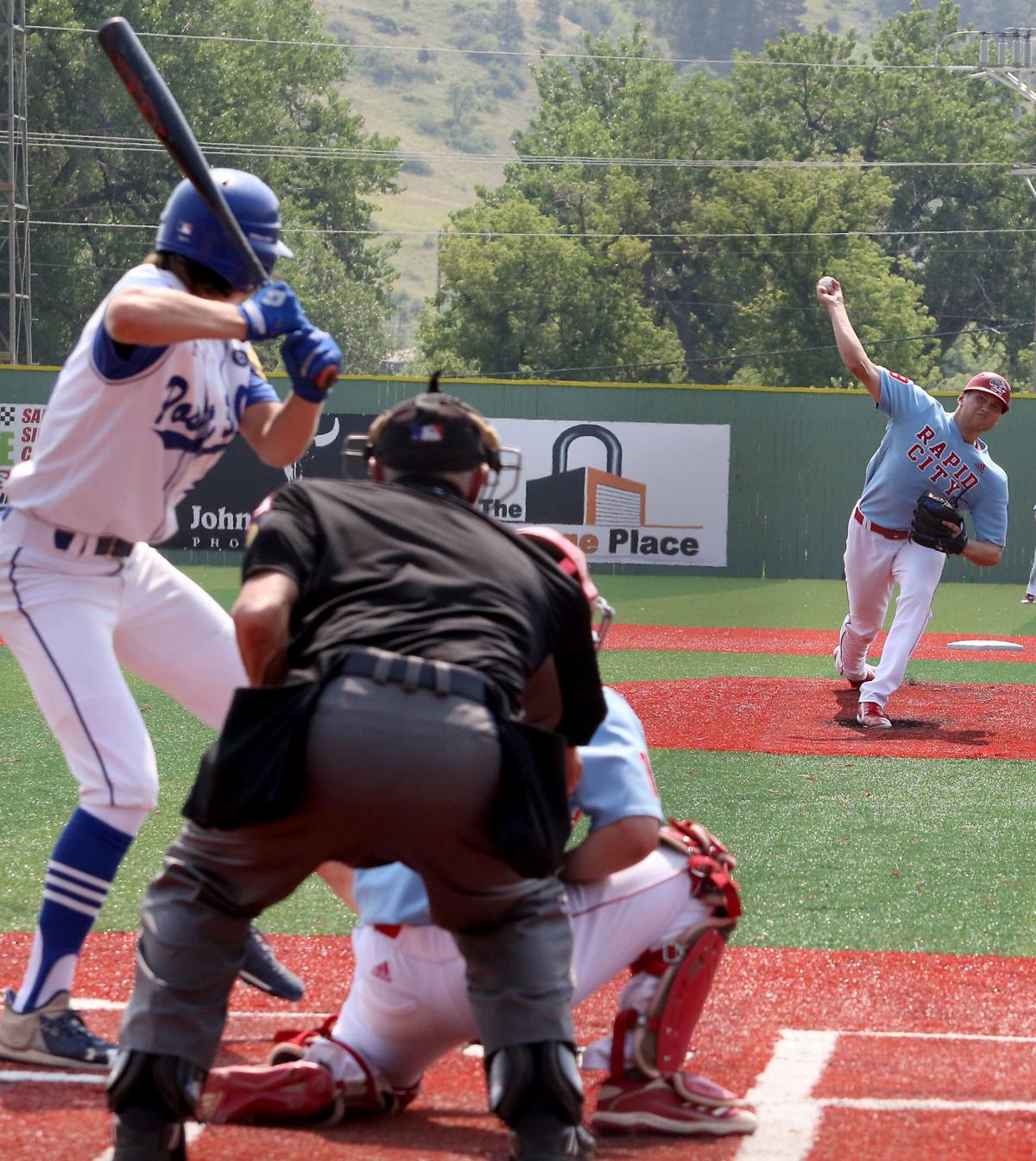 Jake Goble fires a fast ball for a strike in the first inning. Goble pitched into the seventh inning and got the win for Post 22 in a 6-3 win over Renner Post 307. 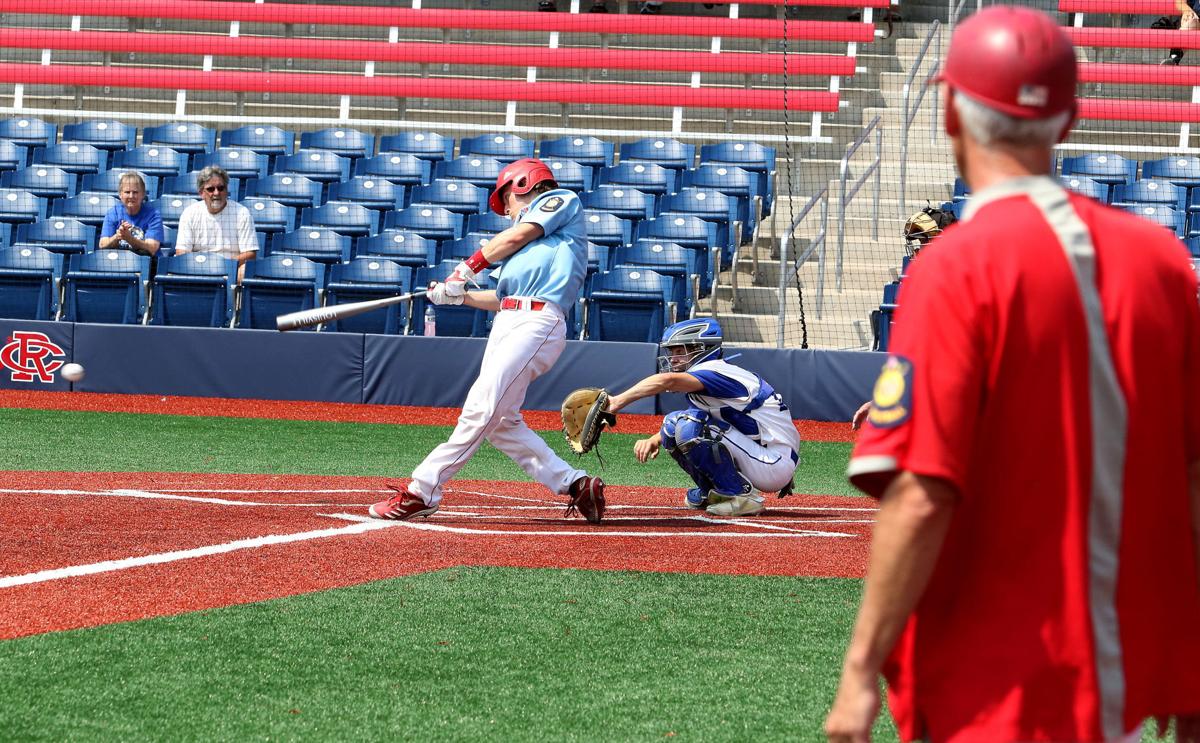 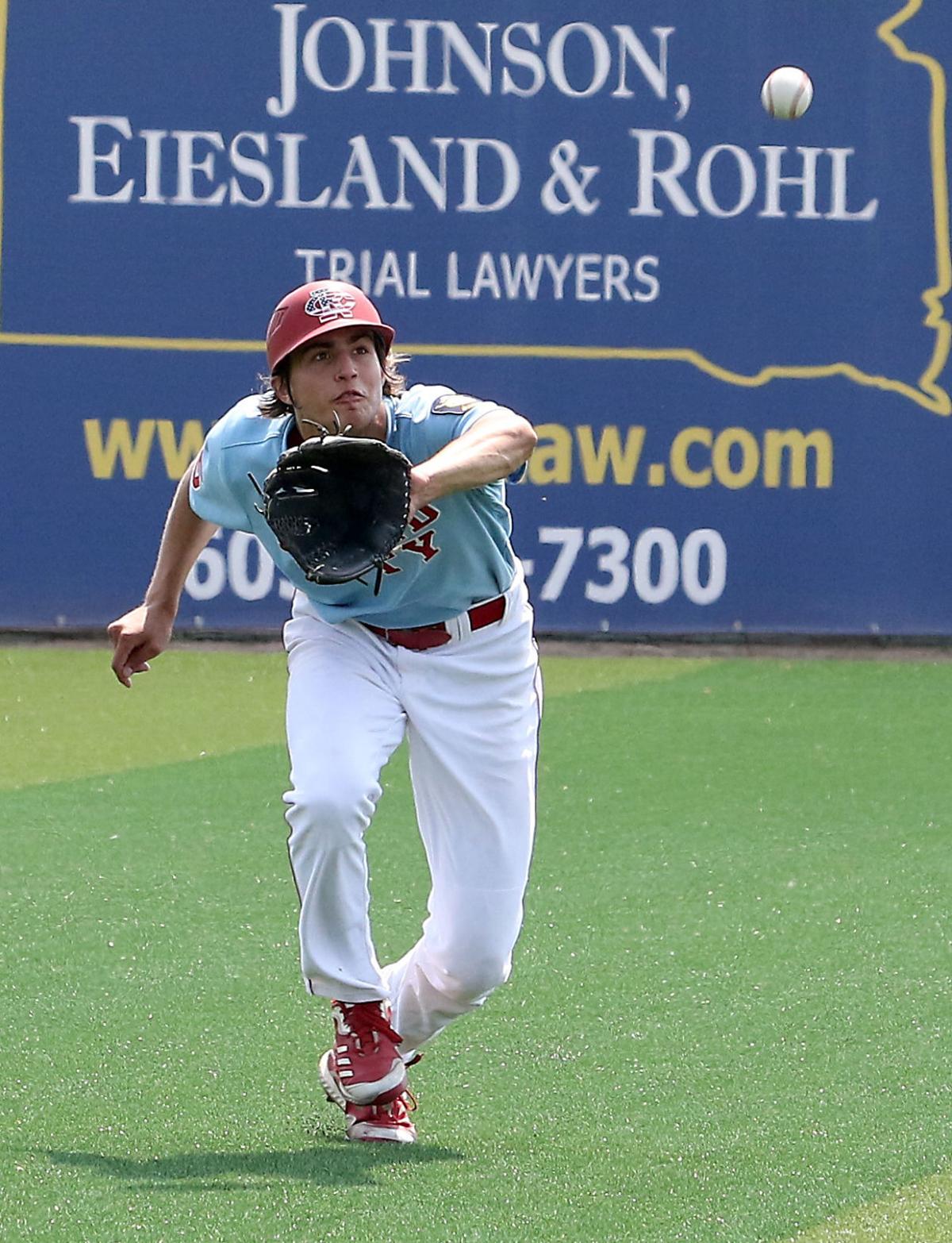 If saving your best for last will get you back to the American Legion state tournament, the Rapid City Post 22 Hardhats could be on their way to playing for a 44th state championship.

At least they're getting there again after sweeping Renner Post 307 in two games in the best-of-three regional series Saturday at Black Hills Surgical Hospital. After beating Renner 3-2 Friday night, the Hardhats followed with a 6-3 victory Saturday afternoon.

Rapid City Post 22 manager Kelvin Torve said they played up to the potential of what this team can do.

"We played well, we played two good baseball games," Torve said. "We made a mess of the seventh inning today, but other than that, we threw strikes and we played tight defense. It was fun to watch."

Saturday, behind the strong pitching from Jake Goble and timely hitting in the top of the seventh inning, the Hardhats took a 6-1 lead into the final half frame.

But Post 22 made two errors sandwiched around one Goble walk to load the bases with no outs. With one out reliever Drew Schebenske walked in one run and Trey Heckenlaible had a RBI ground out to make it 6-3.

But Scherbenske struck out Keegan Wenande looking to end the game and send the Hardhats to state.

Torve said that it wasn't only that Goble threw a lot of pitches (99), but he was running the bases and would have to go out and pitch.

Goble moved to 7-3 with the win and gave up just four hits and three runs (one earned) in six innings, walking four and striking out six.

"It was getting a little long with the heat here, but it was easy to pitch with my defense behind me. They made a lot of plays and not many errors at all," Goble said. "So it was easy."

Goble said he was throwing OK with good command of his fastball the first few innings. His curve ball was here and there, he said, but it was decent overall.

He said he was just trying to get weak contact and challenge hitters to go as long as he could.

"That worked out pretty good I think," he said. "There were a few couple-pitch at-bats with weak contact to the infield, so my plan worked."

Post 22 got on the board first in the second inning when Wyatt Anderson scored from third on a passed ball, and Rapid City took a 3-0 lead in the top of the fourth (Post 22 was the visiting team) on RBI doubles by catcher Jacob Solano and right fielder Peyton Tipton.

Renner scored its first run in the bottom of the sixth on a RBI single by Leo Hueners, but Goble got out of a second and third jam with one out on a fly ball and when he made a pickoff attempt at first on Hueners, who was tagged out at second before a run could score.

The Hardhats came back in the top of the seventh with three big insurance runs. Shortstop Blake Weaver singled and first baseman Tillery reached on a bunt single, followed by a sharp double by right fielder Harrison Good over the third base bag and down the left field line, scoring Weaver.

Left fielder Ryker Henne and Scherbenske made it a 6-1 game with consecutive sacrifice flies for runs.

Good said that Saturday for him was all about hitting the ball hard, although he didn't always have positive results — until his final at bat. He grounded out twice and hit a gap once but it was caught. In his final at bat, he laced the RBI double to get the Hardhats on the board again.

"I had the shortstop and second baseman asking me if that was fair. I said 'Yeah, it was called fair,'" Good said with a smile. "I think it was.

"Hunter came in with a big bunt getting first and third. I drove one down the line and Drew is red-hot. I had a lot of confidence in the team. Just getting on base was key for me."

Solano and Weaver finished with two hits each, while Henne drove home two runs without a base hit. Scherbenske pitched one scoreless inning.

Post 22 had 20 hits in the two games but struggled at times to put together hits for runs, especially Friday night and early Saturday.

Torve said they threw away too many at bats.

"Friday night we scored three runs on 11 hits and we need consistent, competitive at bats from all nine guys," Torve said. "That is what we are going to work on this week. There were too many bad swings in hitter's counts today and yesterday."

Regardless, Torve was still pleased with the team's effort in both games.

"We came out and played baseball from the first pitch ... (Hunter) Tillery Friday night and Goble today," he said. 'We scratched and clawed and scored a run here and there. The sixth inning today was our first big inning for both games. Once we start stringing together competitive bats, we'll be fine."

The Hardhats, 31-25, open the state tournament in Brandon Friday against Sioux Falls West, which qualified by beating Sturgis two out of three games. In the other first round matchups it will be Watertown against Sioux Falls East, Pierre vs. the Renner Royals and Harrisburg against Brandon Valley.

"It (qualifying for state) means a lot to Post 22, that's what we play for every year," Torve said. "The teams do as well, but there is an expectation at Post 22 that at the state tournament, we're going to play well. We embrace that and I think our team is starting to get it. We've played two good games now."

Hunter Tillery jars the ball loose from the Renner Post 307 catcher on a play at the plate after he tagged up on a short fly ball in foul ground. Tillery scored the fifth run in a 6-3 Post 22 win.

Jake Goble fires a fast ball for a strike in the first inning. Goble pitched into the seventh inning and got the win for Post 22 in a 6-3 win over Renner Post 307.