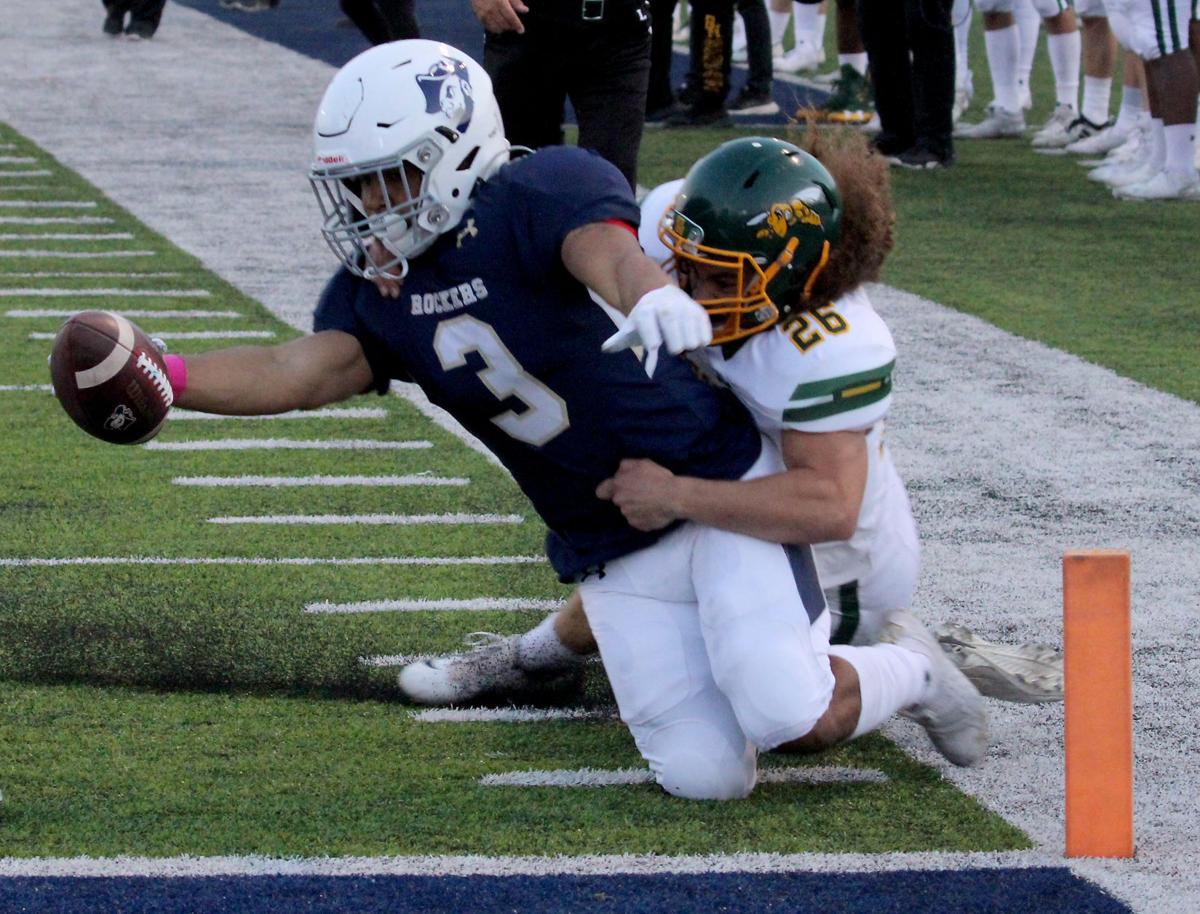 Isaiah Eastman extends the ball over the goalline on a first half touchdown for South Dakota School of Mines against Black Hills State University Saturday at O'Harra Stadium. The Hardrockers took home The Hometake Trophy with a 34-17 win. 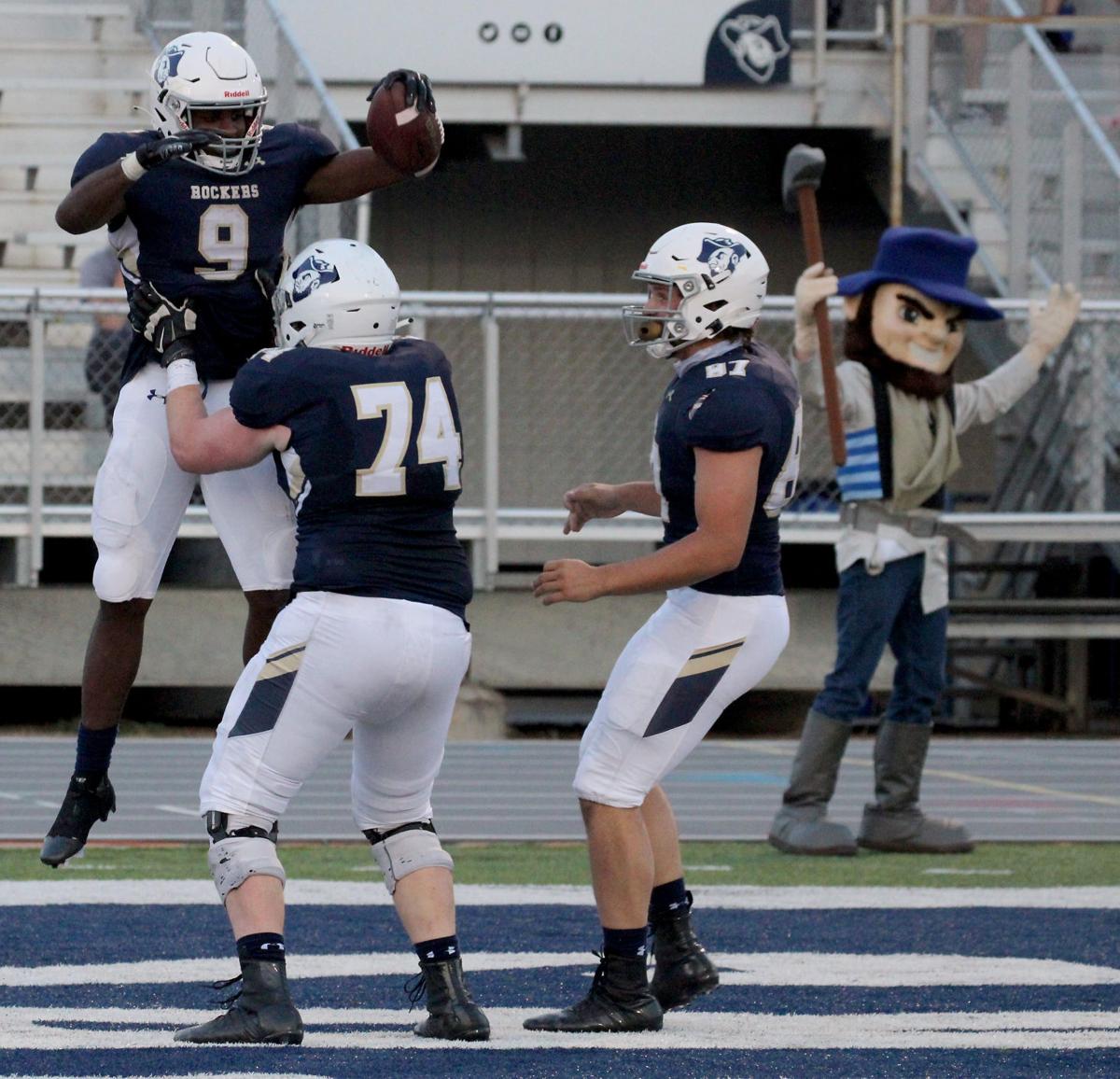 Ahmad Lewis celebrates a 42-yard touchdown run in the second quarter for the South Dakota School of Mines Saturday in its win over Black Hills State University at O'Harra Stadium. 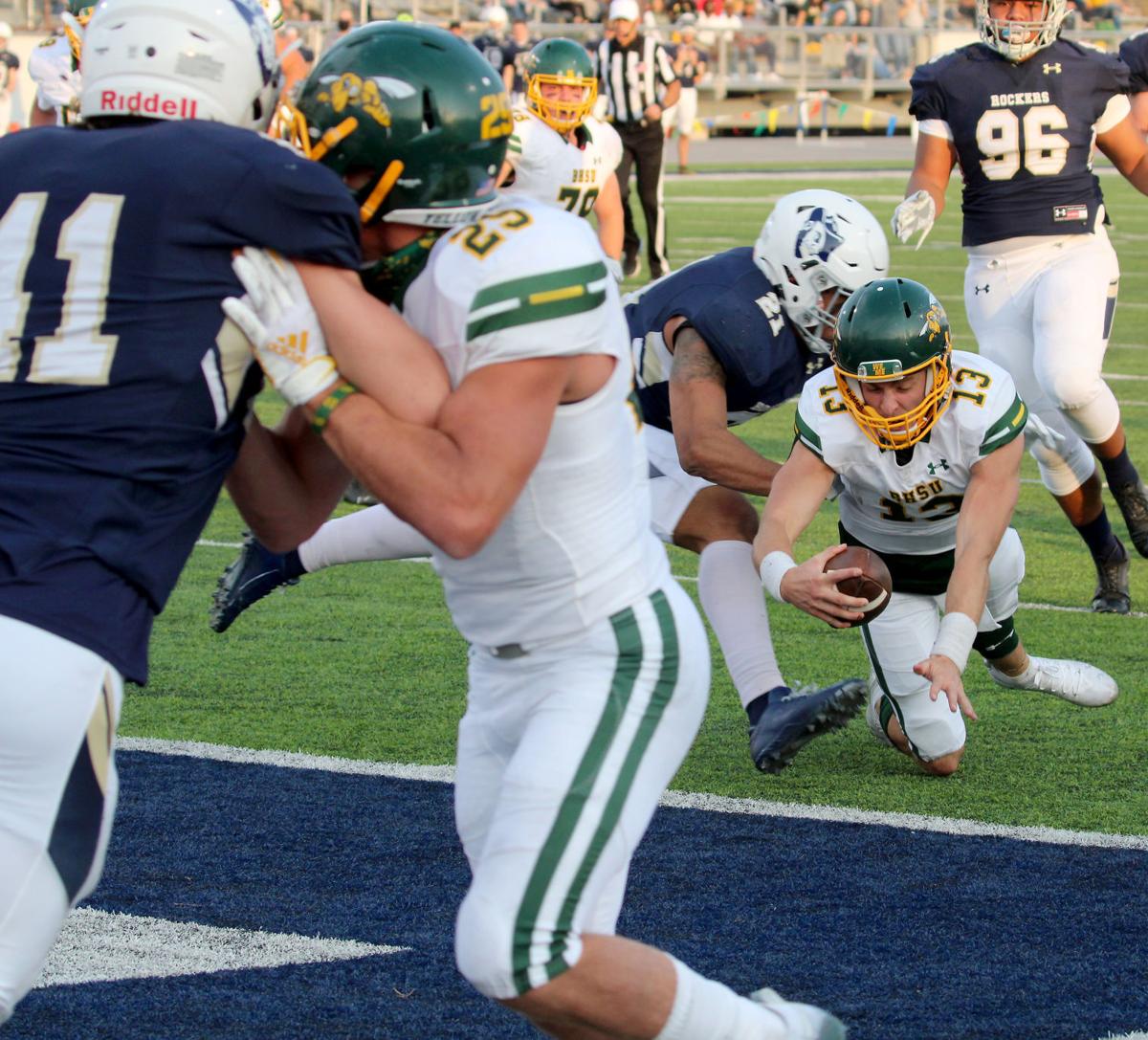 Yellow Jacket quarterback Chance Eben extends the ball over the goal line to get Black Hills state on the scoreboard early in the first half Saturday. 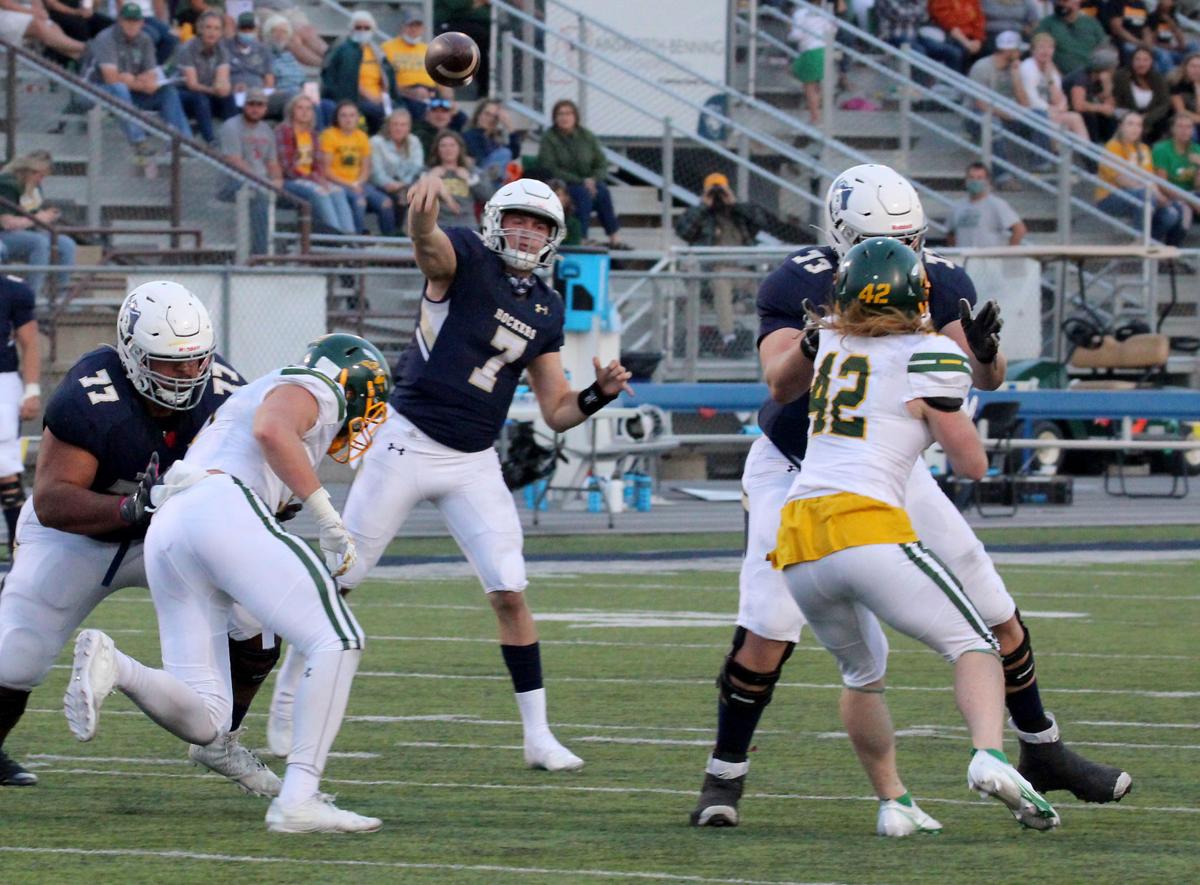 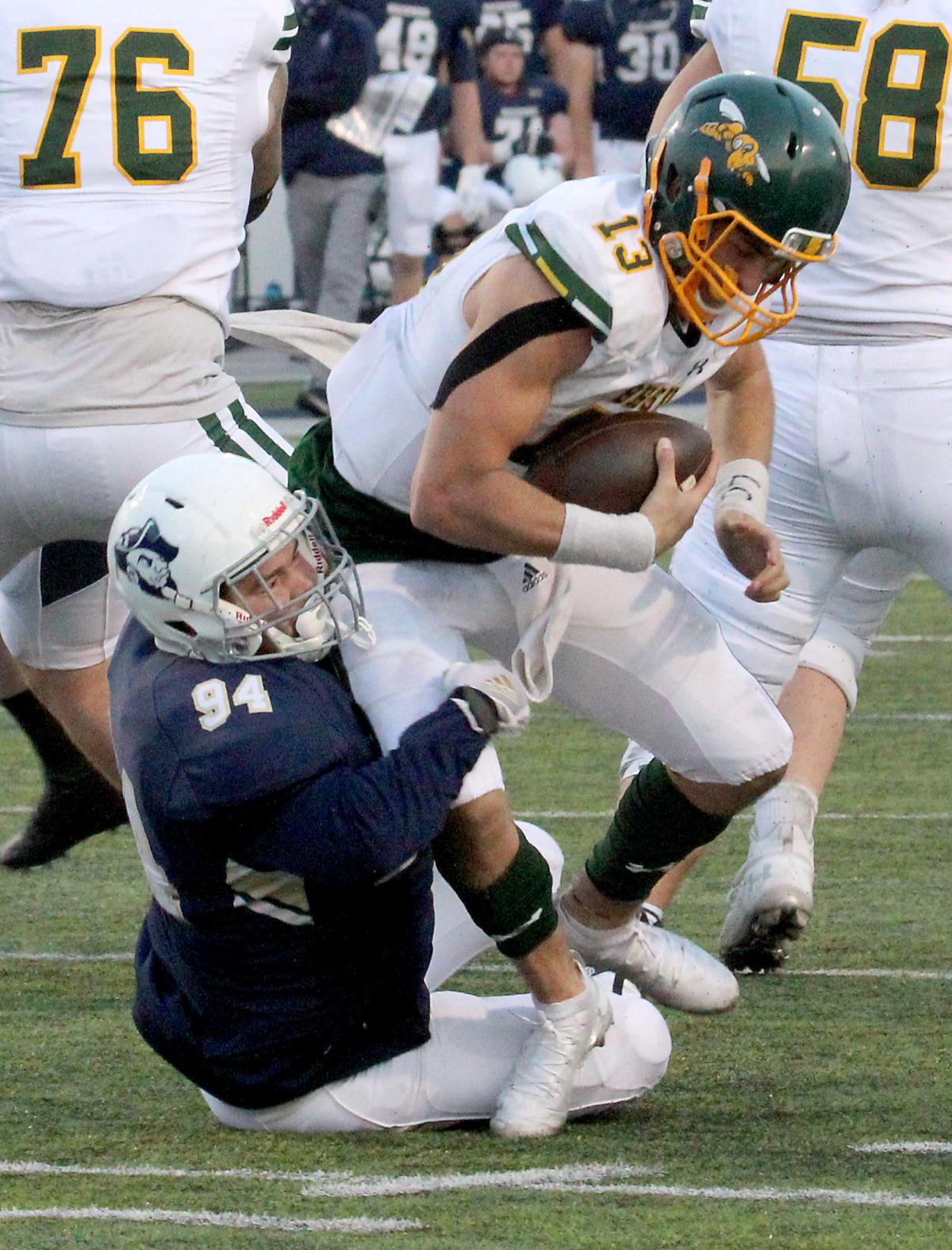 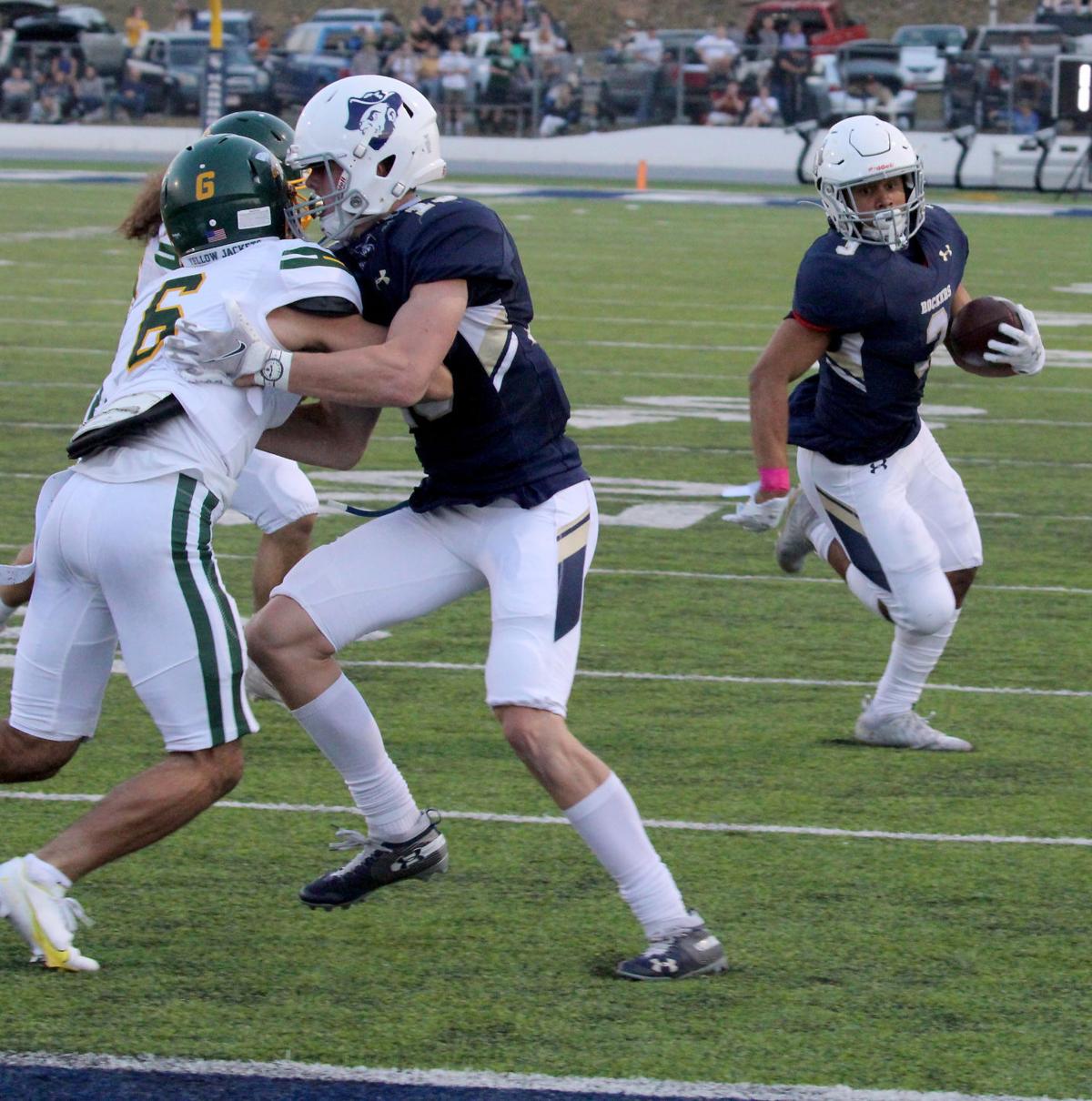 Isaiah Eastman races around a block for a first half touchdown for the Hardrockers.

It will never be a normal college football season for South Dakota School of Mines and Black Hills State University, but the fact that both teams are playing this fall and they opened against each other Saturday might have gotten their juices flowing.

At least it did for the Hardrockers as they downed their arch-rivals 34-17 to win back the Homestake Trophy on Dunham Field at O'Harra Stadium.

In the 135th game of this heralded series, it might have been a typical Black Hills State-South Dakota School of Mines game. There were several mistakes, some chippy play, a controversial call or two by the officials and some big plays on both sides.

Black Hills State led 7-0 at the end of the first quarter, only to see the Hardrockers score 24 unanswered in the second. BHSU closed the gap to seven points after three quarters, only to see Mines win the fourth quarter.

The win was not only Charlie Flohr's first as a Hardrocker, but his first as a head coach.

"First and foremost, they came out and played for a full 60 minutes," Flohr said. "Going into the game we knew it was going to be a battle. They fought hard and did everything they could to win the game. I’m so proud of our kids now.”

It was also the first win for redshirt freshman quarterback Jayden Johannsen, who transferred from North Dakota State. Johannsen was 15-of-22 passing for 149 yards and one touchdown, rushing the ball 11 times for 66 yards and one score.

“Jayden really hadn’t played football in over a year. He earned the starting spot for us and really got control of our team,” Flohr said. “He showed his leadership skills, not only through camp and through this football game today. I’m proud of how he handled himself."

The Black Hills defense had problems stopping the Mines rushing attack, led by Ahmad Lewis, who led all runners with 166 yards and two scores. As a team, Mines ran for 293 net yards.

BHSU head coach Josh Breske, who played in this rivalry game as a Jacket All-America lineman, said it was more like a tale of quarters, not a tale of halves.

Both teams got one first down on their initial possession, but were forced to punt. The Jackets, however, struck first on their second time with the ball, capping a nine-play, 70-yard drive on a 14-yard touchdown run by quarterback Chance Eben.

Earlier on the drive, Eben hit Hasaan Williams on a nice 29-yard sideline pass, although Williams was called for unsportsmanlike conduct after the play, costing the Jackets 15 yards. Eben came right back with a 13-yard pass to Kieler Harpham, setting up his TD run.

The Hardrockers put together a nice drive, led by Johannsen, who was 4-of-5 passing for 46 yards, but Enis Sefa missed a 28-yard field goal to keep them scoreless.

But they weren't scoreless for long. Mines got a stop on defense and marched right down the field behind the arm and legs of Johannsen, who scored on a 3-yard run, capping a 7-play, 61-yard drive. Johannsen also had a 17-yard run on the drive, as well as a 12-yard pass to Collin Zur. Zach Hoopman also had a 13-yard run.

The second quarter was a disaster for the Jackets, as a muffed punt recovered on the BHSU 25 led to a 33-yard field goal by Sefa, and an interception by Tony Monroe, Jr., on the 18 led to a 15-yard TD pass from Johannsen to Isaiah Eastman.

They say bad things come in threes and it happened to the Jackets. After a holding call on a punt, BHSU was forced to kick again out of the end of its end zone and Mines took over on the BH 42.

Two plays later  Lewis broke a couple of tackles and rambled home from 42 yards out for a 24-7 Mines lead, the score it took into the locker room at halftime.

“Shoot, those two plays were tough to come back from,” Breske said of the turnovers. “At some point of the game I feel like we just lost our spirit a little bit. I wasn’t coaching the guys up on the field as much as I was on the sideline.

The first four minutes of the third quarter was about as strange as it could get. Mines lost two fumbles and the Jackets one. The Hardrockers were called for a roughing the placekicker penalty when Jacob Parks missed a 42-yard field goal, and two plays later Eben found Mitch McKibbin on a 12-yard TD pass to make it a 24-14 game.

Mines had another nice drive going but Sefa missed a 35-yard field goal. Parks responded for the Jackets from 22 yards out to cut the lead to 24-17 with 2:43 remaining in the third.

Flohr said the second half didn’t come out the way they wanted it to.

“We always talk about the most important drive of the football game is the first drive of the second half,” he said. “We ended up having two turnovers. Our kids hung in there; they kept fighting, they kept believing and I’m so proud of that.”

The Hardrockers put the game away on a 17-yard TD run by Lewis with 6:39 remaining. Spencer Zur came in at QB and had three rushes for 33 yards on the drive as Johannsen left the game with leg cramps. He returned on the next possession.

“Our kids battled, they responded. They knew there was a lot of football left,” Flohr said. “They finished the game the way we needed to.”

Eben, who led the Jackets to the 48-28 win over the 'Rockers last season in Spearfish, was 7-of-28 passing for 103 yards, with 31 yards on the ground. But he was sacked four times and the Mines defense harassed him into several hurried throws.

"He is a big physical kid, he runs hard, but he took a lot of shots today. He is going to be sore (Sunday),” Flohr said. “Our defense did a phenomenal job of answering the bell when they needed to.”

Nolan Susel led the Jackets with 47 yards rushing. BHSU had 115 yards on the ground and just 218 total yards of offense.

The Hardrockers will be at Chadron State next Saturday. The Eagles fell at Colorado Mesa 10-7 in overtime.

“Anytime you start the season against an arch-rival, you can throw the records out. I’m just proud of the kids in the way they handled themselves," Flohr said. "We played hard, we played physical. We just have to continue to grow that. The biggest increase in a team is from week one to week two, and we have a very tough opponent down in Chadron.”

SIOUX FALLS | South Dakota Gov. Kristi Noem is cashing in on nationwide support as coronavirus cases surge in the state.

Isaiah Eastman extends the ball over the goalline on a first half touchdown for South Dakota School of Mines against Black Hills State University Saturday at O'Harra Stadium. The Hardrockers took home The Hometake Trophy with a 34-17 win.

Ahmad Lewis celebrates a 42-yard touchdown run in the second quarter for the South Dakota School of Mines Saturday in its win over Black Hills State University at O'Harra Stadium.

Yellow Jacket quarterback Chance Eben extends the ball over the goal line to get Black Hills state on the scoreboard early in the first half Saturday.

Isaiah Eastman races around a block for a first half touchdown for the Hardrockers.