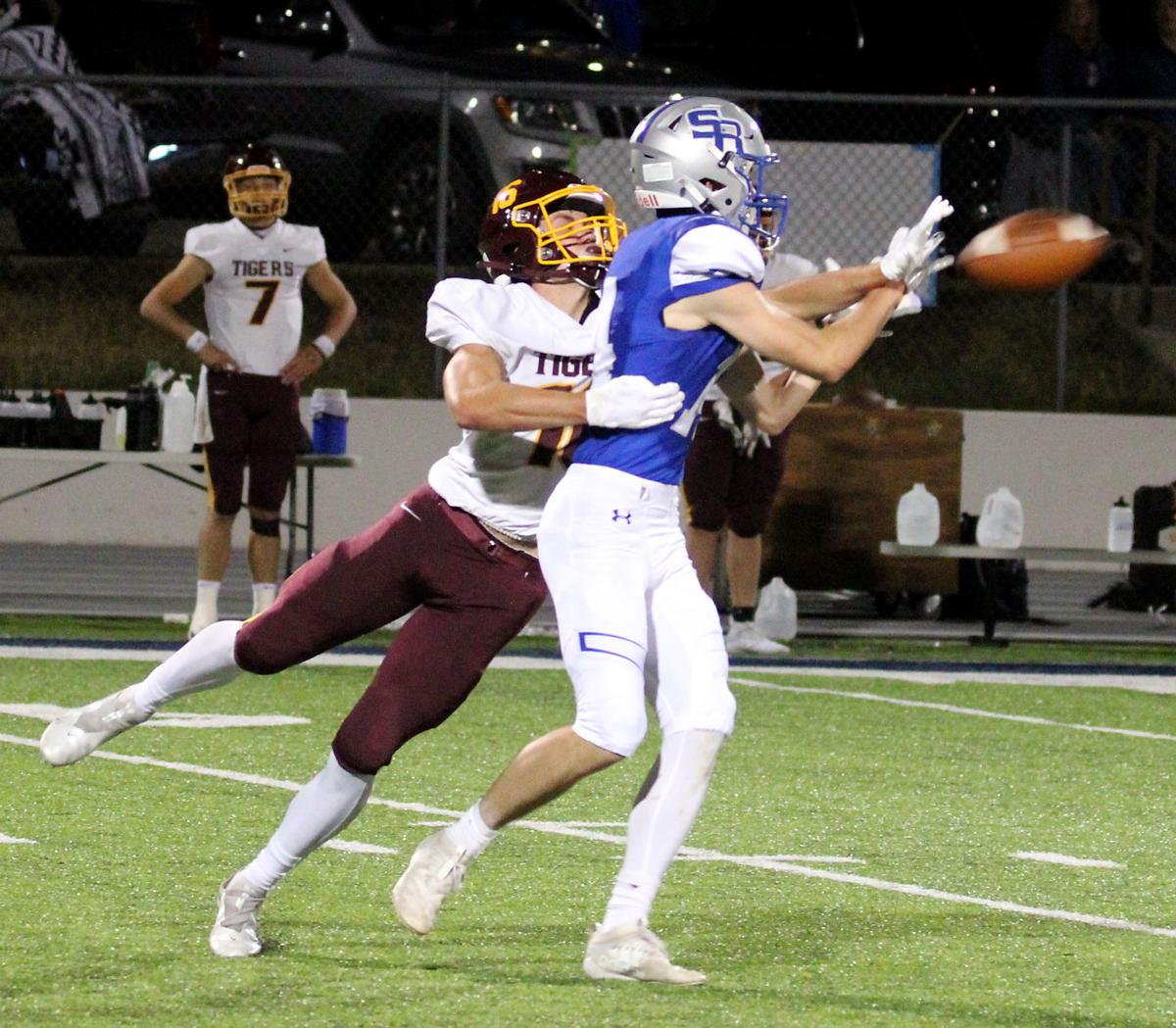 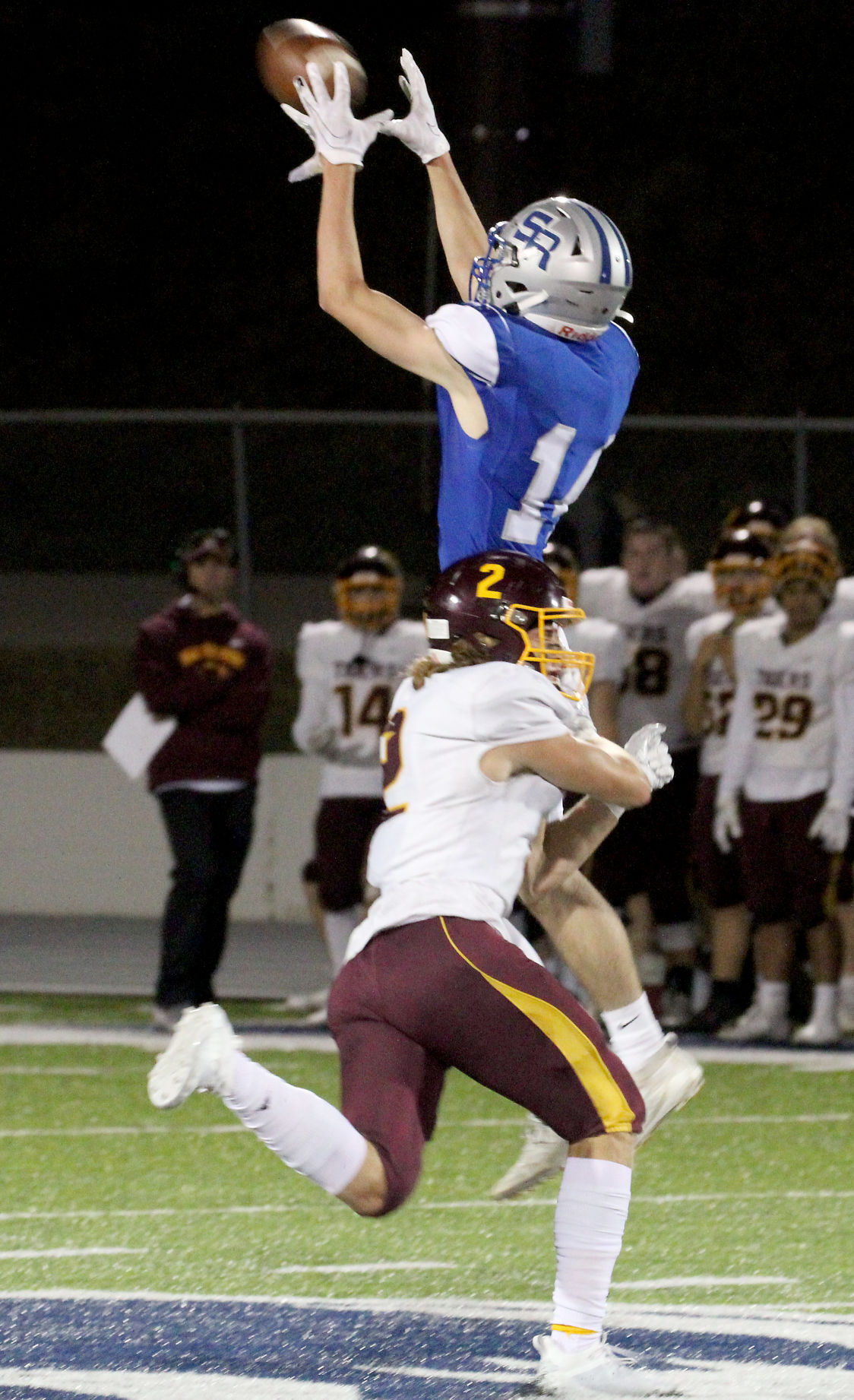 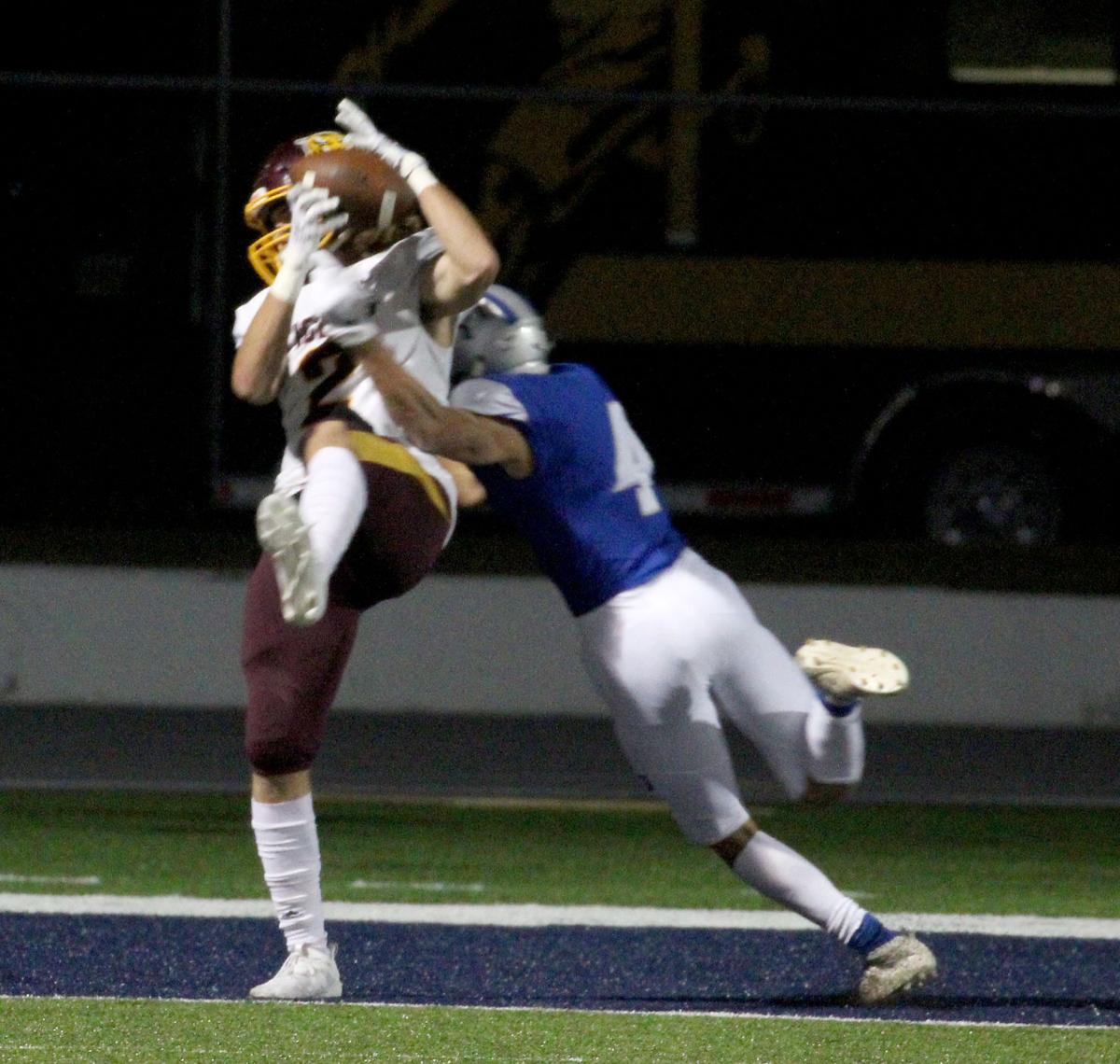 Raider defensive back Corter Doney breaks up a pass in the end zone Friday night. 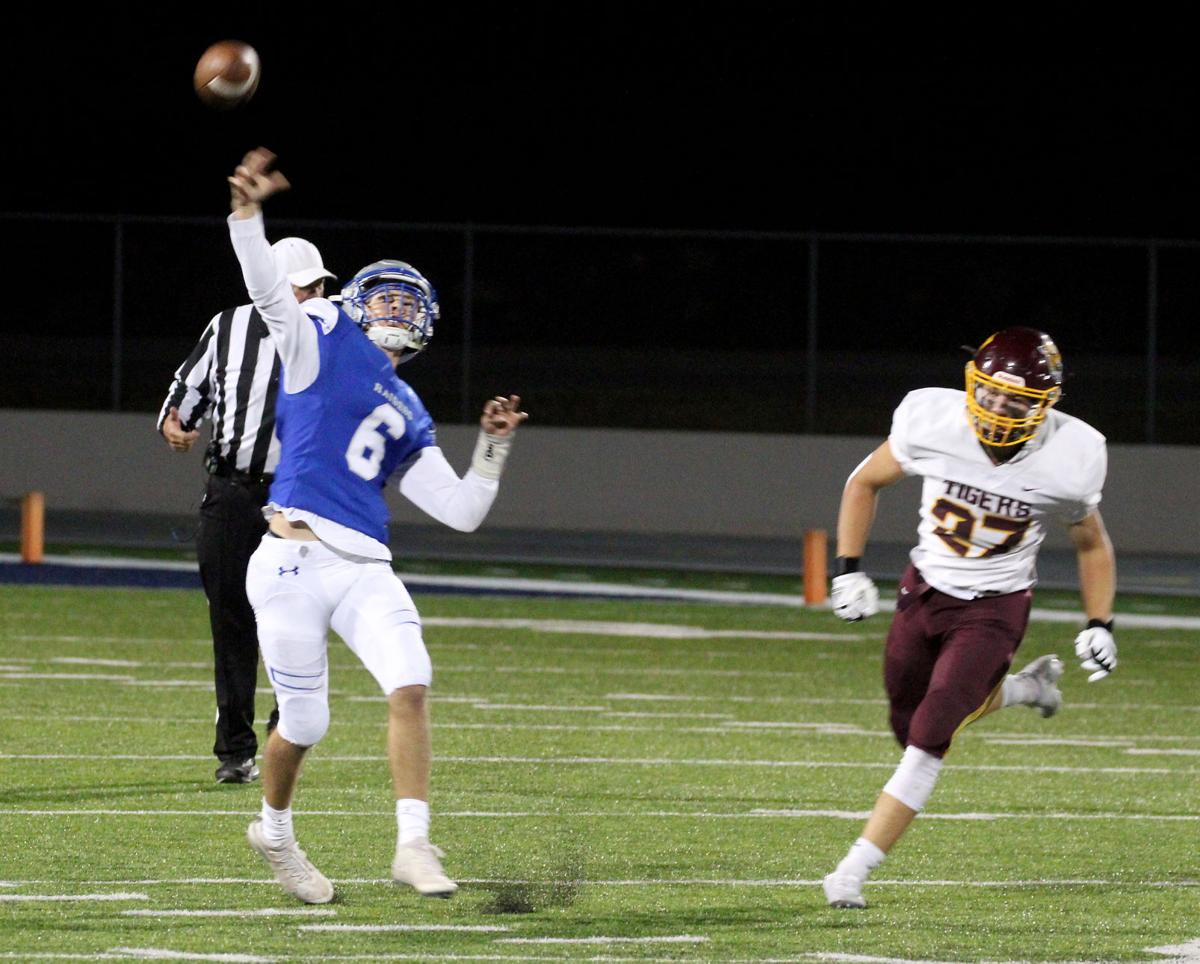 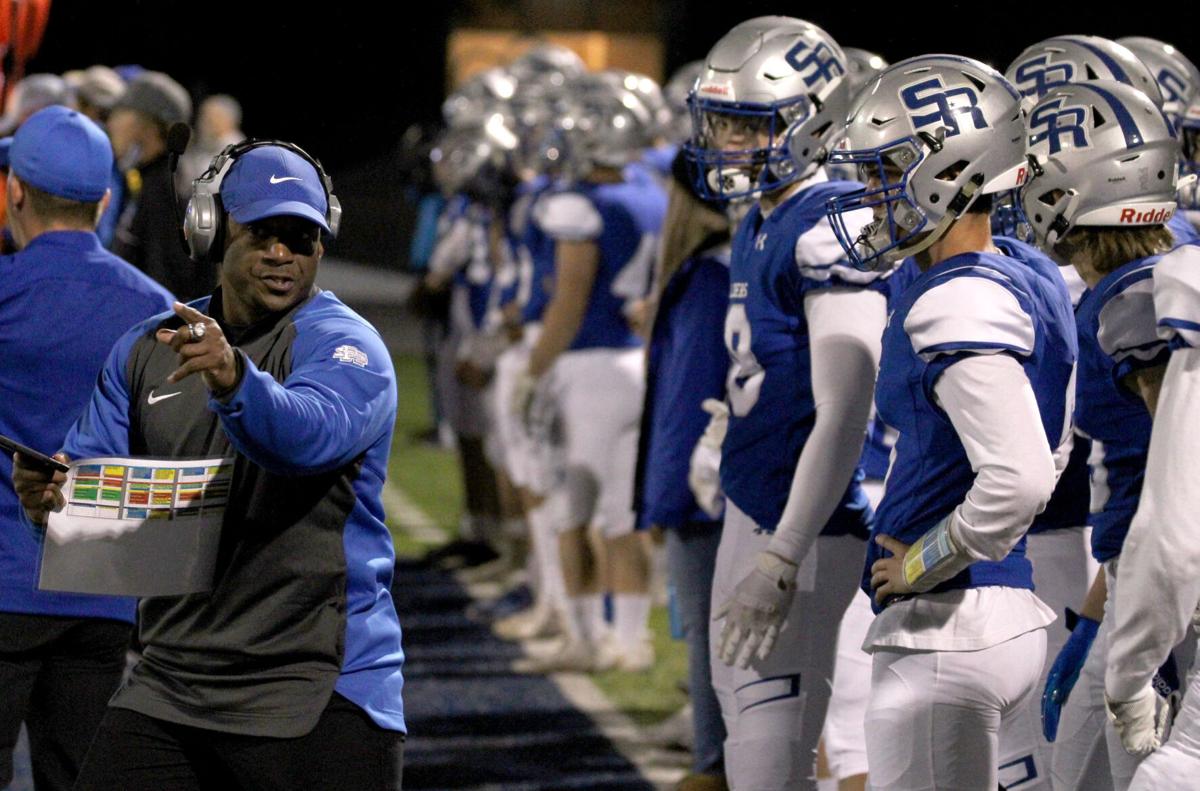 Raider Head Coach Michael Scott tells his offense what he wants on passing routes during the first half of Rapid City Stevens' game against Harrisburg.

Rapid City Stevens failed to get its offense past the opposing 36-yard line and was stifled on offense after starting quarterback Jed Jenson left the game with an injury, and was shut out by Harrisburg 44-0 in the second Rushmore Bowl game on Friday at O’Hara Stadium.

“We’re young, and we were able to move the football, we’ve just got to capitalize on those opportunities,” Raiders head coach Michael Scott said. “We couldn’t catch a football or touch a football until the end of July. We had a short amount of time before we were really able to put things in, and in that short period of time, I’ve seen these boys progress tremendously.”

Jenson finished 6 of 16 for 92 yards and ran for another 26 yards on three carries in one of half of action before going down with what Scott said is a broken collarbone. Alex Trohkimoinen and Easton Ogle also caught two passes each for 36 and 55 yards, respectively.

The Tigers went on offense to start the contest and scored on a 15-yard touchdown pass from Jacob Knuth to Brandon Simunek. Knuth connected with Simunek again in the second quarter for a 29-yard touchdown, and Bryce Soli kicked a 35-yard field to make it 17-0 at halftime.

The Raiders punted four times in the first half and turned the ball over on downs twice. They reached the 36-yard line on a 44-yard pass from Jenson to Kasin Nelson, but a 4-yard rushing loss and three straight incompletions ended the drive.

Eli Oxner intercepted a Harrisburg pass in the end zone early in the second quarter, but Stevens failed to reach beyond its own 40 on the ensuing possession.

Tate Crosswait entered the game for Jenson and struggled under pressure, throwing three interceptions, two of which were returned for touchdowns in the third quarter. The Tigers also scored twice on offense in the frame on rushing and passing plays.

“We’re going to make mistakes,” Scott said. “I will say, on the bright side, we didn’t have nearly as many penalties tonight. We didn’t have any botched or bad snaps, and that plagued us for the first two games. Those boys were able to fix that. I still believe in them. I’ll take this team over any team in the state, any day of the week.”

Eli Oxner gets an interception in the end zone for Stevens Friday.

Raider defensive back Corter Doney breaks up a pass in the end zone Friday night.

Raider Head Coach Michael Scott tells his offense what he wants on passing routes during the first half of Rapid City Stevens' game against Harrisburg.