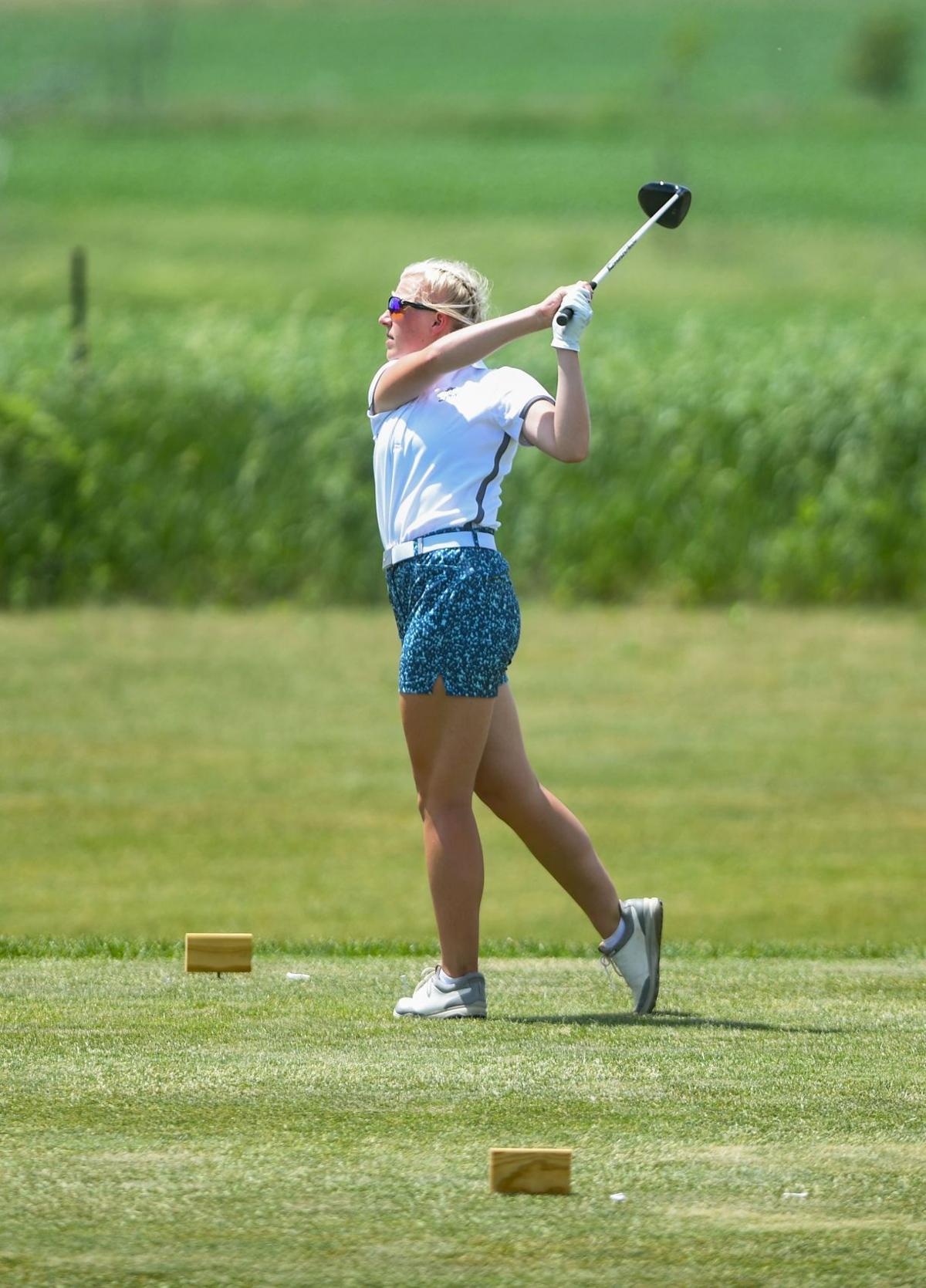 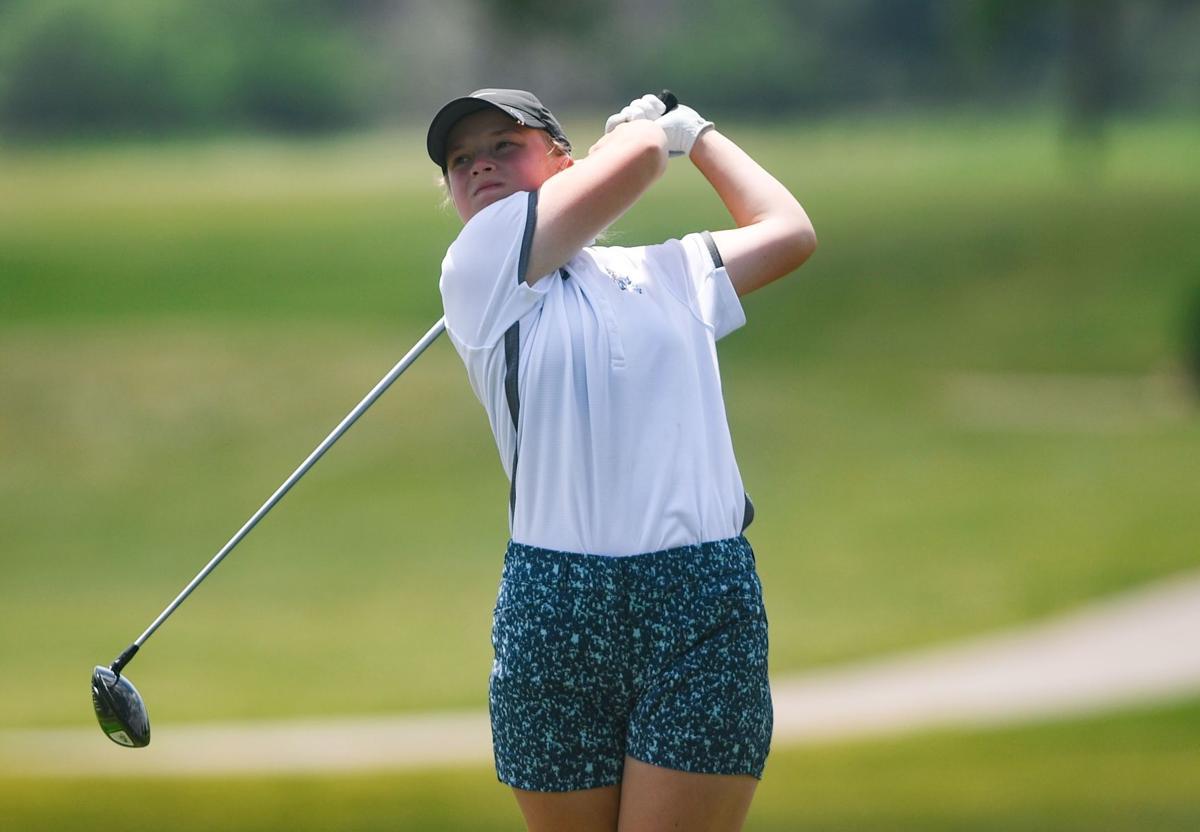 Tuesday’s final round of the 2021 SDHSAA Class AA Girls golf tournament at Bakker Crossing Golf Course in Sioux Falls was a bit short on suspense.

It was, however, not at all short on excellence as Reese Jansa capped off two days of superb golf by winning the individual title by 11 strokes and establishing an all-time state tournament record in the process. And in the team race, Sioux Falls O’Gorman captured a fourth consecutive team title.

Leading by six shots after a Monday’s opening round of 66, Jansa promptly birdied the first hole and eagled the second (the only eagle recorded in the tournament) to open an eight-shot lead over defending champion and only challenger, Shannon McCormick of Sioux Falls O’Gorman.

For the Harrisburg junior, the remainder of the round was a veritable walk in the park interrupted only by quality golf shots enroute to a three-under 68, and a 36-hole tournament total of eight-under 134 to break the previous all-time record of seven under set by Kimmy Kaufman of Clark in 2007.

“I was feeling it today. I was so excited about my round yesterday, a PR, and I just thought I’ve got this today. And then I just nailed my gap wedge from a hundred yards out and made my putt,” Jansa said of her eagle on hole No. 2. “With a six-point lead going into today I couldn’t really be discouraged at any point. I just felt like I had to dig deeper and see what truly I could do. Kim Kaufman has been one of my biggest role models since I was young. I’ve always looked up to her. She’s on the LPGA and I would love to be on that.”

About the only missing from Jansa’s two-day golfing tutorial was a hole-in-one. Just barely. On the 11th hole (the third toughest hole in the tournament), Jansa just missed an ace nearly jarring a pitching wedge from 144 yards.

“I was about an inch away on that hole 11,” said Jansa who will be busy the next couple of weeks competing in a USGA Junior Qualifier next week and the First Tee National Championship in South Carolina the week following. “It would have been my first (hole-in-one). I’ve watched some before but I’ve never had my own.”

Though driving the ball consistently well, Phares struggled around the greens, leaving chips and pitches shorts thereby putting pressure on her putting game.

“Sometimes I left them too short and I wasn’t always able to make my putt to save par,” Phares said. “And when I missed iron shots into the greens, I felt like I had to chip it close or I wasn’t going to save par”.

Paired with Jansa in the final round and defending champion McCormick on Monday, Phares came away confident that the chance to share shots and conversation with the state’s best will render long term benefits.

“Honestly, I think playing with people who are better than me pushes me to be a better player, and gives me motivation to get to their level so it was a really good opportunity for me,” Phares added.

“It always feels great but with having lost a year to Covid and not be able to see the kids that were new to the program for literally two years and then to have them come together like this is just really amazing,” O’Gorman coach Tom Jansa said (great uncle of Reese). “We had three stalwarts but the other three girls who didn’t have much experience stepped up to the plate and I couldn’t be prouder of them. That fourth score comes from three different girls so they each have had their moment in the sun.”

Rapid City Stevens coach Nick Rotella expressed satisfaction with his young Raider squad (junior, sophomore, three freshman and an 8th grader). And excited at the prospect of what may lay ahead.

“We would have liked to have fourth, but I’m happy with where we finished,” Rotella said. “Most everybody improved their score from yesterday which shows that they adjusted from yesterday’s play. We have a young team and all six are coming back next year. I know it’s 365 days away but I’m already looking forward to playing next year.”

Though neither team fielded a complete squad with which to compete in the team race, sophomore Josie Farrier (105, 102-207) posted the low score for Rapid City Central while Ashley Bear (123, 119-242) did likewise for Sturgis.

Complete team and individual scores and totals are available at the SDHSAA website (sdhsaa.com) and Golfgenius.com.