For the past several weeks, the Hill City volleyball team has fought through adversity and continued to win despite losing their head coach, earning the program’s second-ever berth in the Class A State Tournament.

On Thursday they were faced with more adversity in a match that started to resemble last year’s first-round contest, going down two sets to none and finding themselves on the brink of elimination.

“We just had to prioritize what we wanted it for,” senior Abby Siemonsma said. “Not playing for the people watching but just for each other.”

The Rangers started figuring things out in the second set, and bolstered that into a dominant victory in the third to stay alive. In the fourth they went tit-for-tat with the Red Raiders, including two staved-off match points, and a deciding set seemed imminent, but No. 4 Wagner refused to let it get there, converting its third match point to knock off No. 5 Hill City 25-18, 25-21, 11-25, 26-24 at Summit Arena to advance to the Class A semifinals.

“They came back, they fought hard and they played how they should’ve come to play,” said Rangers head coach Renae Schneider. “They came out a little, maybe nervous, and I was hoping with the experience they had last year that they maybe wouldn’t, but they played well to come back.”

“We’re just really happy to be here and it kind of sucks because you always want to win that first match,” Siemonsma said. “But we’re not perfect, nobody’s perfect, and we’re just excited to keep playing because we’ve still got two more left.”

The Rangers built an early 9-5 lead in the opening set but struggled against the power and precision of the Red Raiders, who tallied eight kills while grabbing 12 of the next 13 points, including an 8-0 run, to pull ahead 17-10.

Siemonsma dialed up an ace and Taylor notched her first kill of the afternoon, winning a joust at the net, as Hill City went on a 6-2 run to cut their deficit to 20-17, but Wagner quelled the threat and finished off the opening frame on a 5-1 stretch.

“Our region is strong, so we’re used to having people attack on us,” Schneider said. “I don’t think Wagner was any different than playing (Rapid City) Christian or Belle (Fourche) or STM. They’re used to that.”

The Red Raiders carried momentum into the second set and constructed an 11-3 advantage before the Rangers started to find their game. Trailing 20-10, Peckosh tossed in a pair of aces and Whitney Edwards tallied a kill on a 7-0 run to get within three points, down 20-17.

The deficit proved too much, however, as Wagner eked out the frame for a two-sets-to-none advantage, but Hill City was starting to find a groove.

“Normally when you lose the first two sets you’re done for, but we just knew we had to fight for each other,” Siemonsma said. “We really wanted it and we didn’t really let it get to us.”

Peckosh opened the third set with a kill and followed it with a combined block alongside Taylor as the Rangers took advantage of Wagner errors that were starting to pile up. Edwards dumped in back-to-back aces to help her squad build a 14-5 lead, which extended to 20-10. Kirsch, Peckosh and Siemonsma all fired in consecutive kills before a Red Raiders mishit gave the Rangers a set point.

Hill City smacked a serve short on the next point, but Wagner returned the favor with a serve long to put their opponent on the board.

“Our passes got to where we could run in-system,” Schneider said. “Instead of having to set behind the 10-foot line out of system all the time.”

Both squads strung together mini runs in the fourth set. The Red Raiders went on a 5-0 stretch to pull ahead 10-9 before the Rangers answered with a 4-0 run to move back in front 13-10. Seven lead changes and 10 ties told the story of the frame, with the most crucial of the latter coming at 22-22 when Wagner dialed up back-to-back kills to gain two match points, ahead 24-22.

Siemonsma staved it off with a tipped kill, then Riley Wiese saved the second with a spike from the left side to level the set at 24-24.

But Hill City failed to win another point as Wagner closed it out by seizing the next two, clinching the victory with an ace on its third match point.

“They’re disappointed in the way they came out,” Schneider said. “And I think they believe that they still have things to prove for the next two matches.” 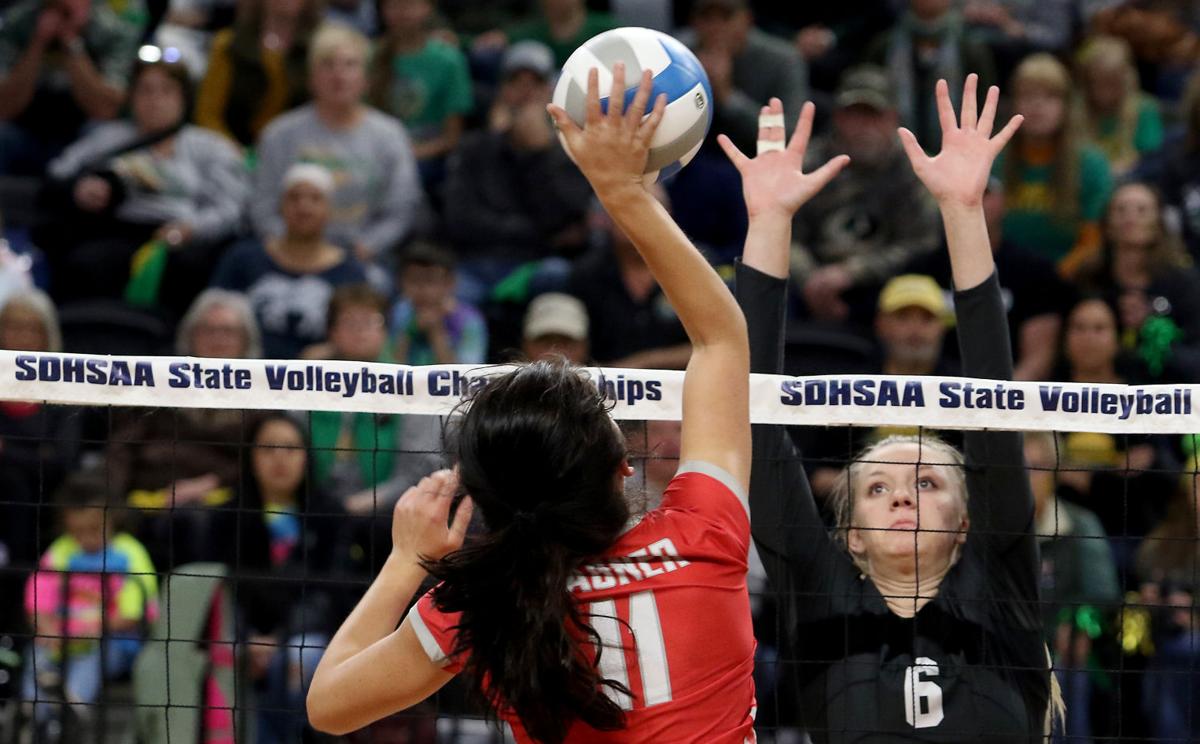 Hill City's Maggie Taylor (6) jumps to block a Wagner shot attempt during the first round of the Class A state volleyball tournament Thursday at Summit Arena. The Rangers fell to the Red Raiders in four sets. 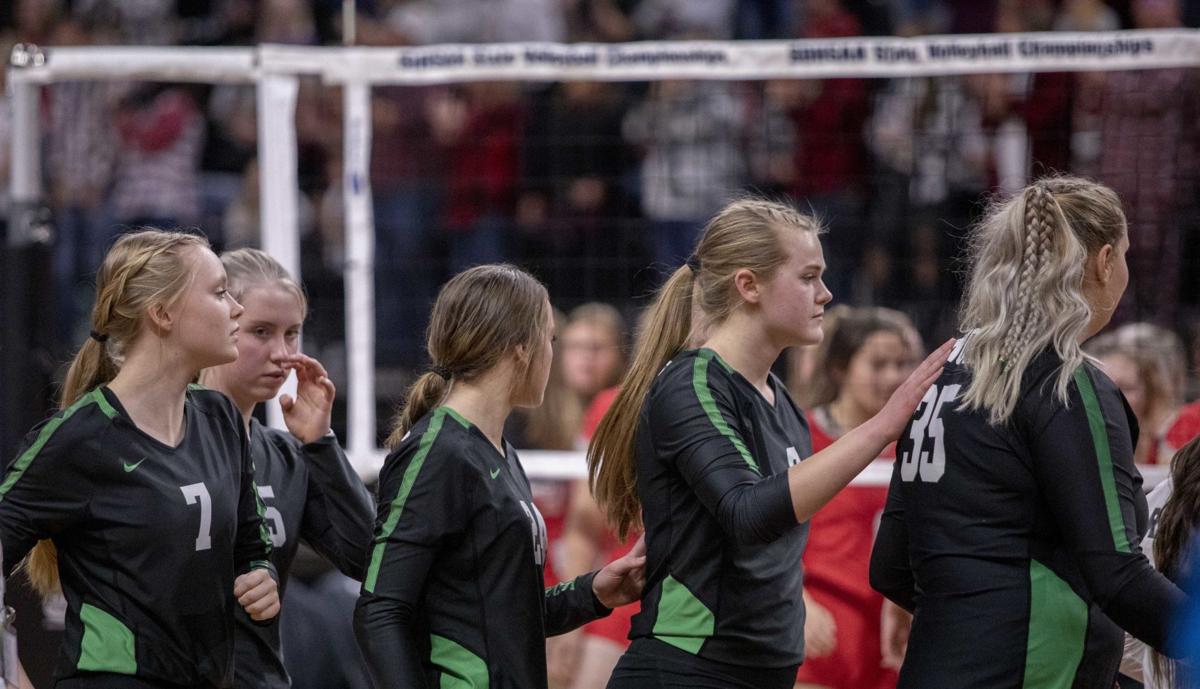 Hill City teammates prepare to leave the court after falling to Wagner on Thursday in Summit Arena. 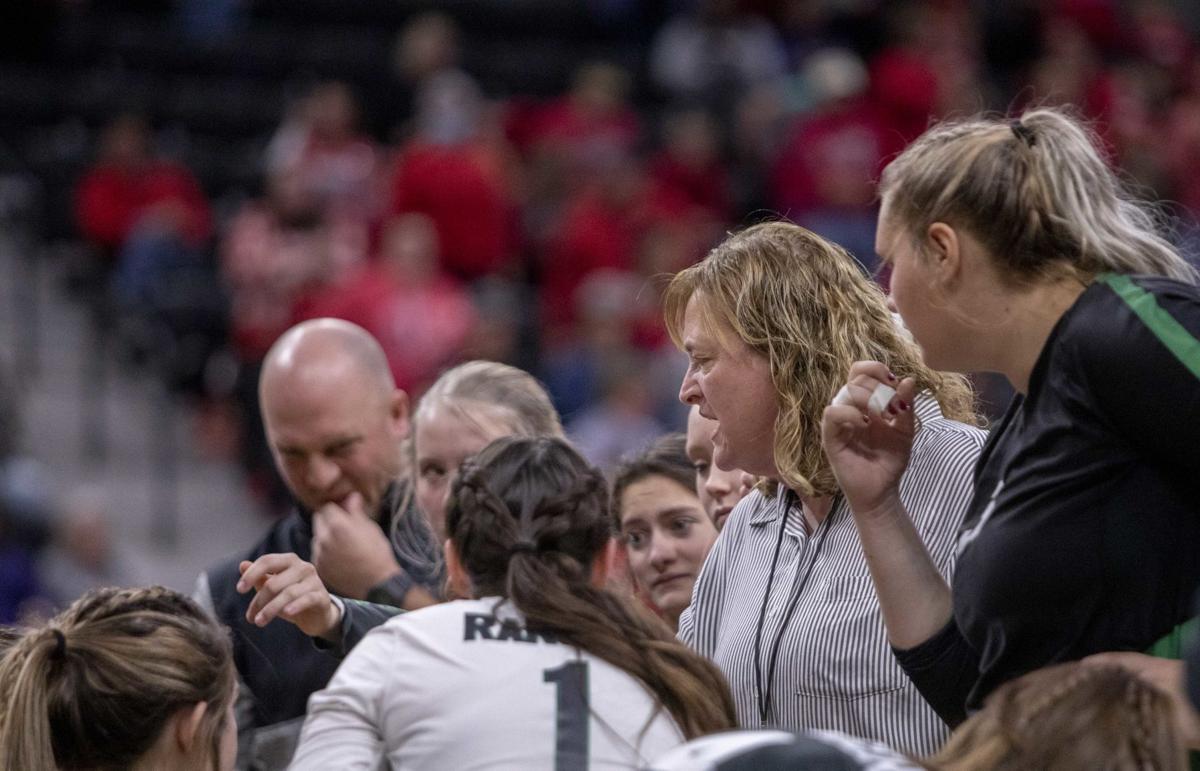