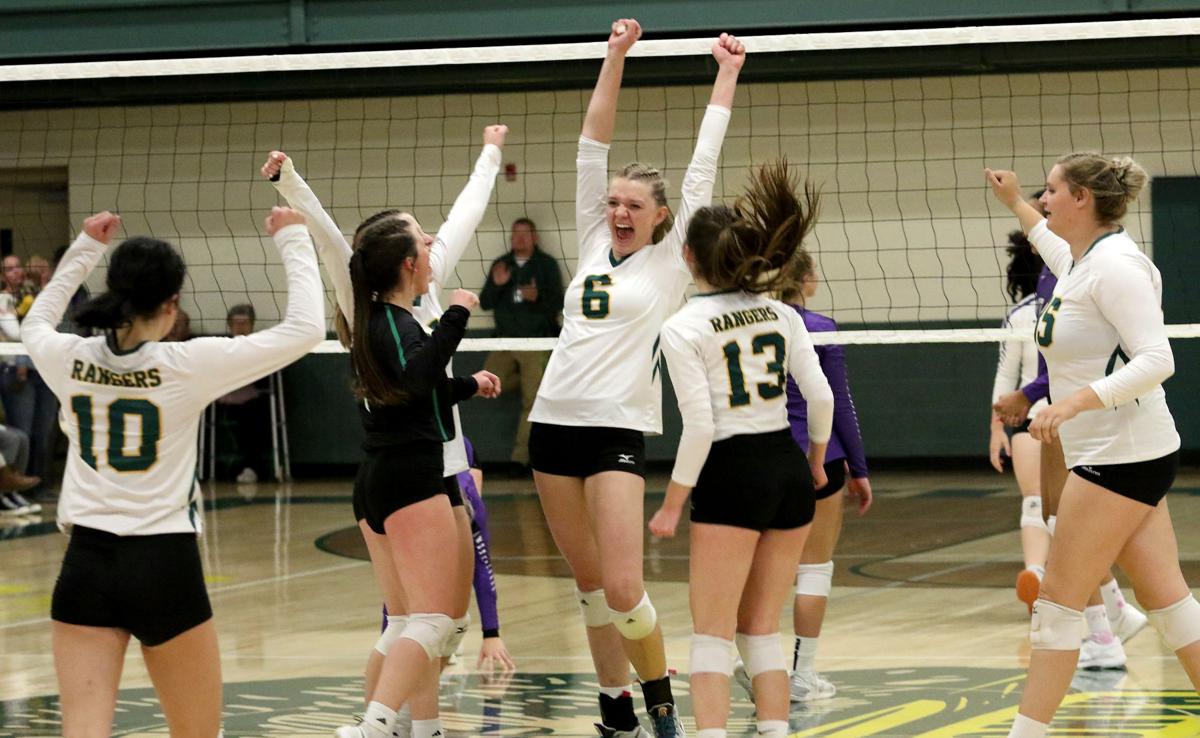 Hill City sophomore Maggie Taylor celebrates with her teammates after a block in the fourth set to help the Rangers beat Belle Fourche 3-1 Tuesday at Hill City High School. 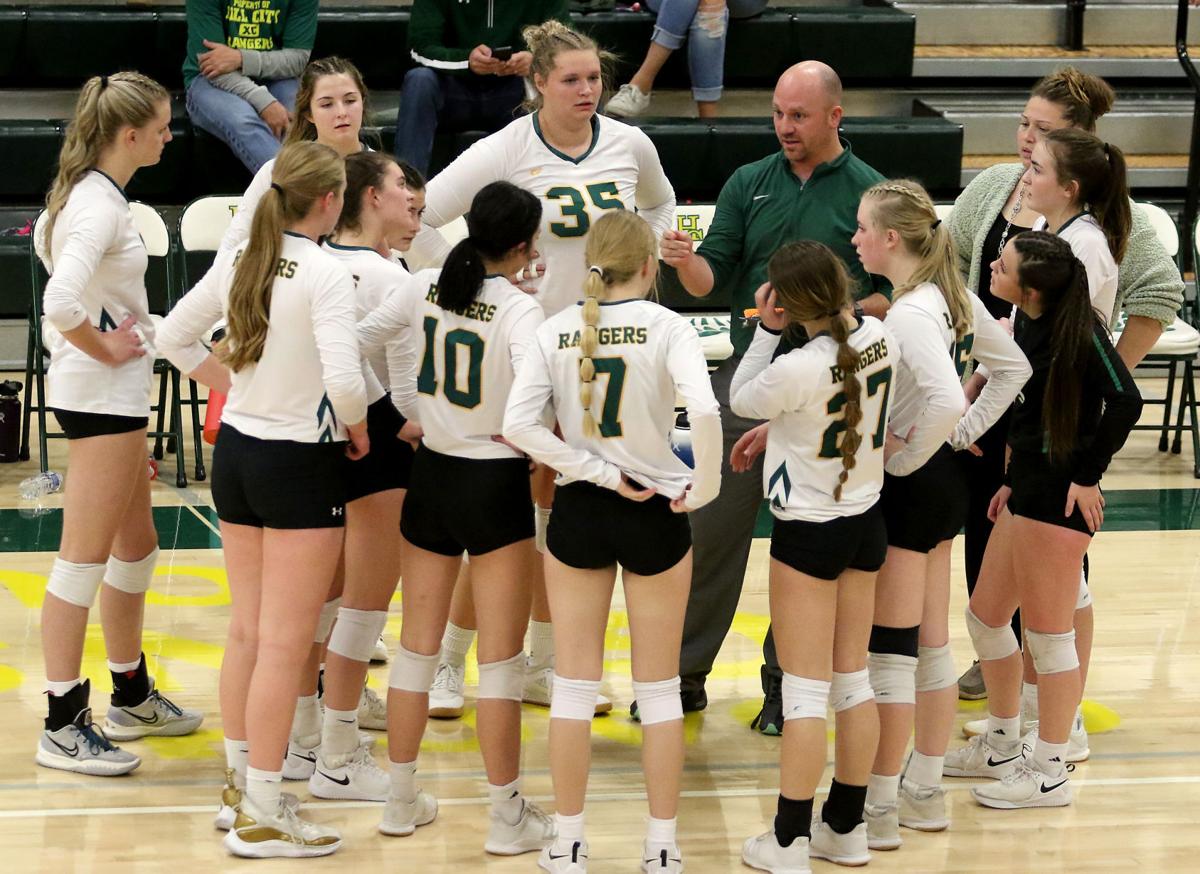 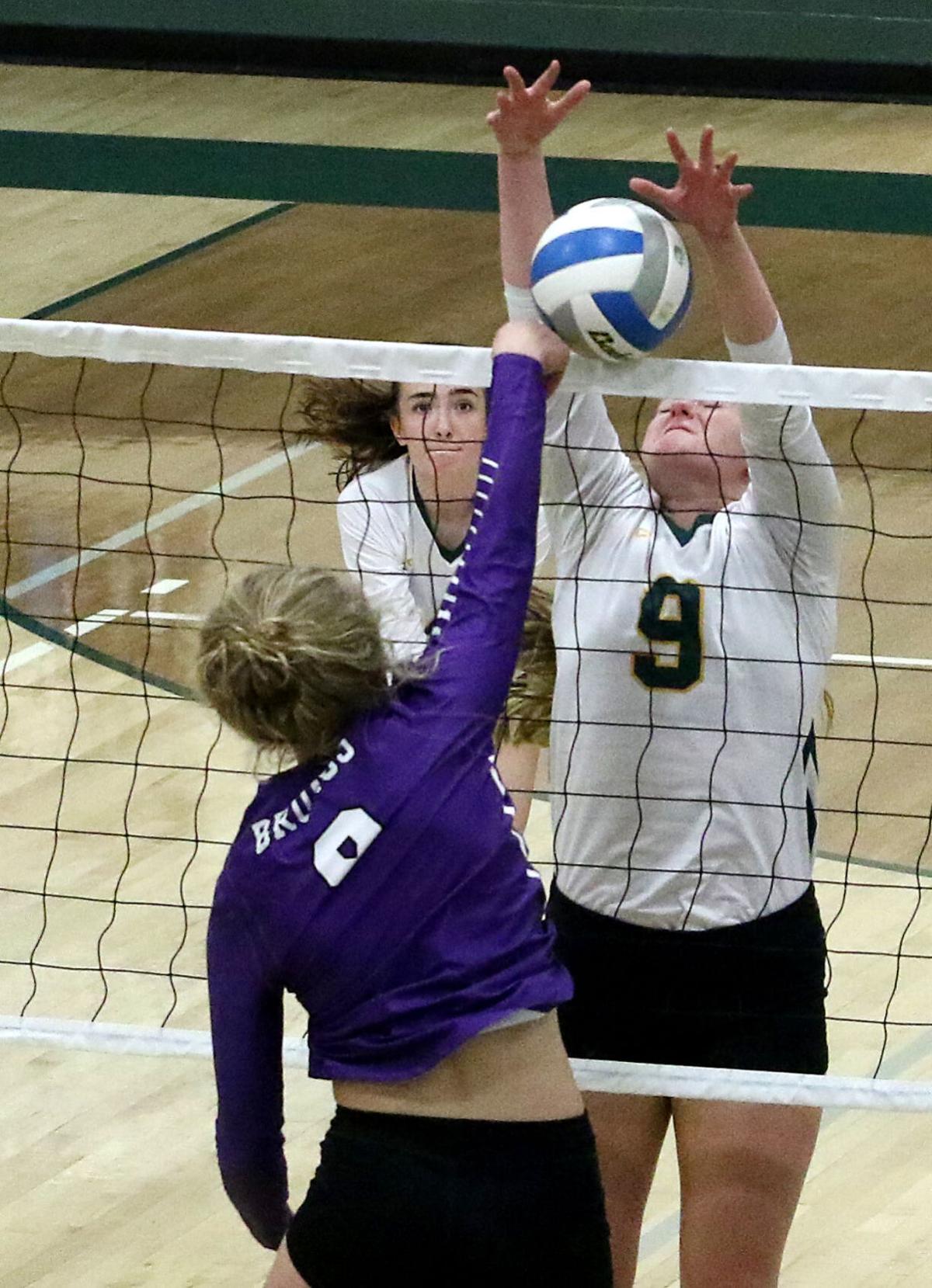 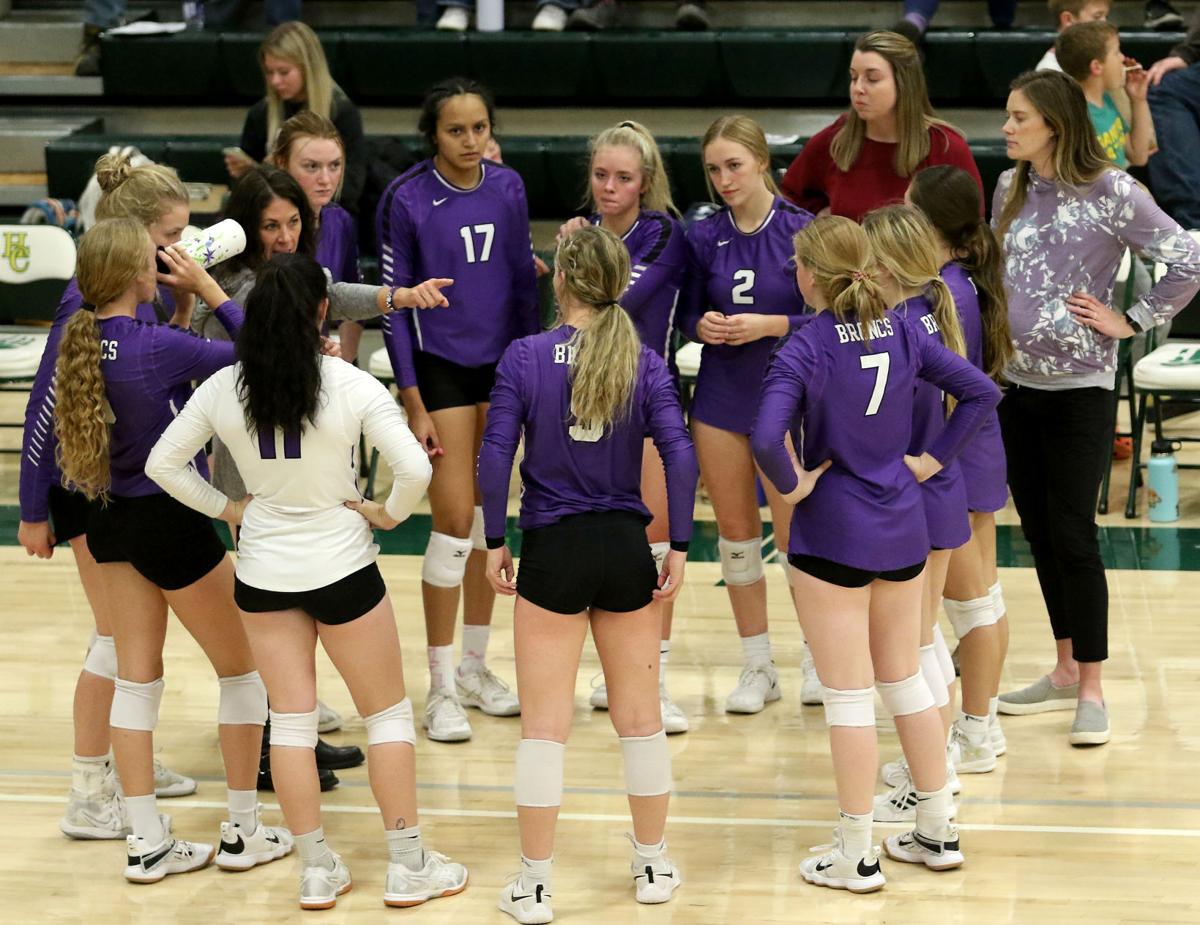 The Broncs utilized blocks to keep points alive and rode that wave to a one-set advantage.

“We weren’t covering very well to begin with, so it’s that constant reminder that you always have to be ready,” said Rangers athletic director and interim head coach Wade Ginsbach. “You have to cover the blocks, cover the spikes.”

The Rangers rebounded by dropping shots over would-be blockers and used its power hitters, who blasted shots through defenders and led a comeback charge as No. 4 Hill City topped Belle Fourche 17-25, 25-18, 25-16, 25-19 in their regular season finales.

Both squads now await their first-round opponents in the Region 8A tournament set for Tuesday.

“It just shows us that even when we’re down we can really dig ourselves out of that hole and just lift each other up,” senior middle hitter Whitney Edwards said. “Once we started playing as a team and executed, everything worked out, so we just have to remember that for the postseason.”

Belle Fourche picked up four points off blocks, led by Garza and Ward, in the opening set and roared out to a 15-7 advantage. Ahead 23-13, Hill City started to make its move and rattled off four straight points but back-to-back errors handed the first set to the visitors.

The two teams went back-and-forth through the early going of the second before the Broncs notched four consecutive points off three errors for a 9-6 lead. The Rangers eventually pulled ahead 18-16 after Marle Peckosh dialed up three straight aces before Taylor and Kirsch took care of business with two kills apiece on a 6-0 run to level the match at one-set each.

“The first set was a little bit rough,” Edwards said. “But then we were reminded what our goals were and what our plans were and we executed it really well.”

Hill City used two sizable runs in the third set to take a two-sets-to-one advantage. Edwards recorded a pair of kills on an 8-0 run for 16-7 lead, then successfully blocked a shot on a 7-0 run for a 23-12 lead. On set point a few plays later, the 6-foot-2 Taylor smoked a shot down that line that ricocheted off a Belle Fourche player for the kill.

“They know that volleyball is set after set,” Ginsbach said. “So we played well, we kept it together and we stuck to the game plan.”

It was a back-and-forth fourth set, with neither squad building a lead of more than three, until an Edwards kill gave the Rangers the first six points of the final eight to claim the match. They took the last three in the process, set up by a slam dunk by Taylor off a Broncs dig.

“It’s a game of ups and downs, and we were consistent,” Ginsbach said. “That’s what we preach; to bring energy and be consistent.”

The first round of the Region 8A tournament is slated for next Tuesday. The final round takes place Thursday with the last two teams advancing to the SoDak 16.

Hill City sophomore Maggie Taylor celebrates with her teammates after a block in the fourth set to help the Rangers beat Belle Fourche 3-1 Tuesday at Hill City High School. 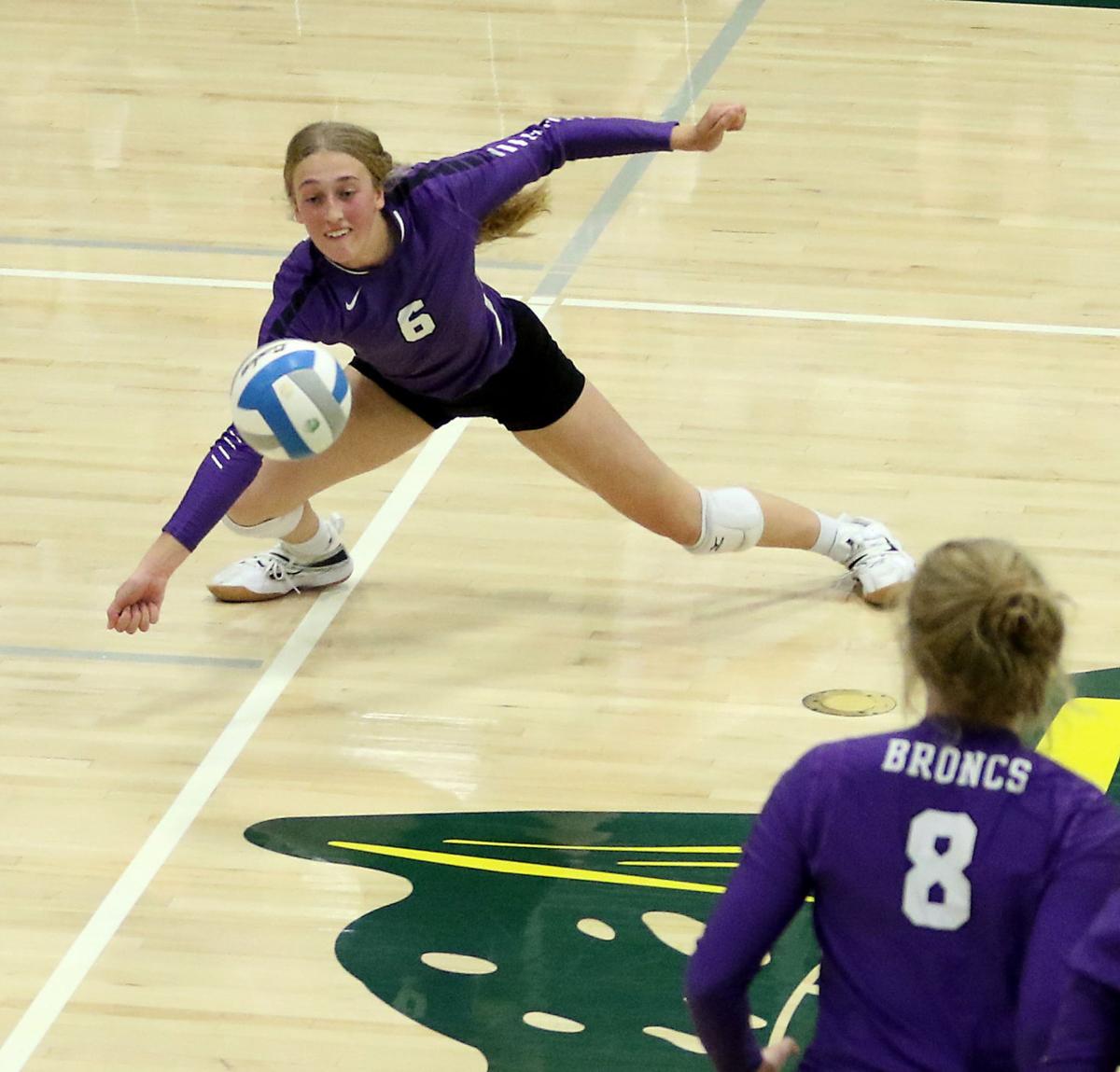 Belle Fourche sophomore Mataya Ward gets a dig for the Broncs Tuesday night in Hill City. 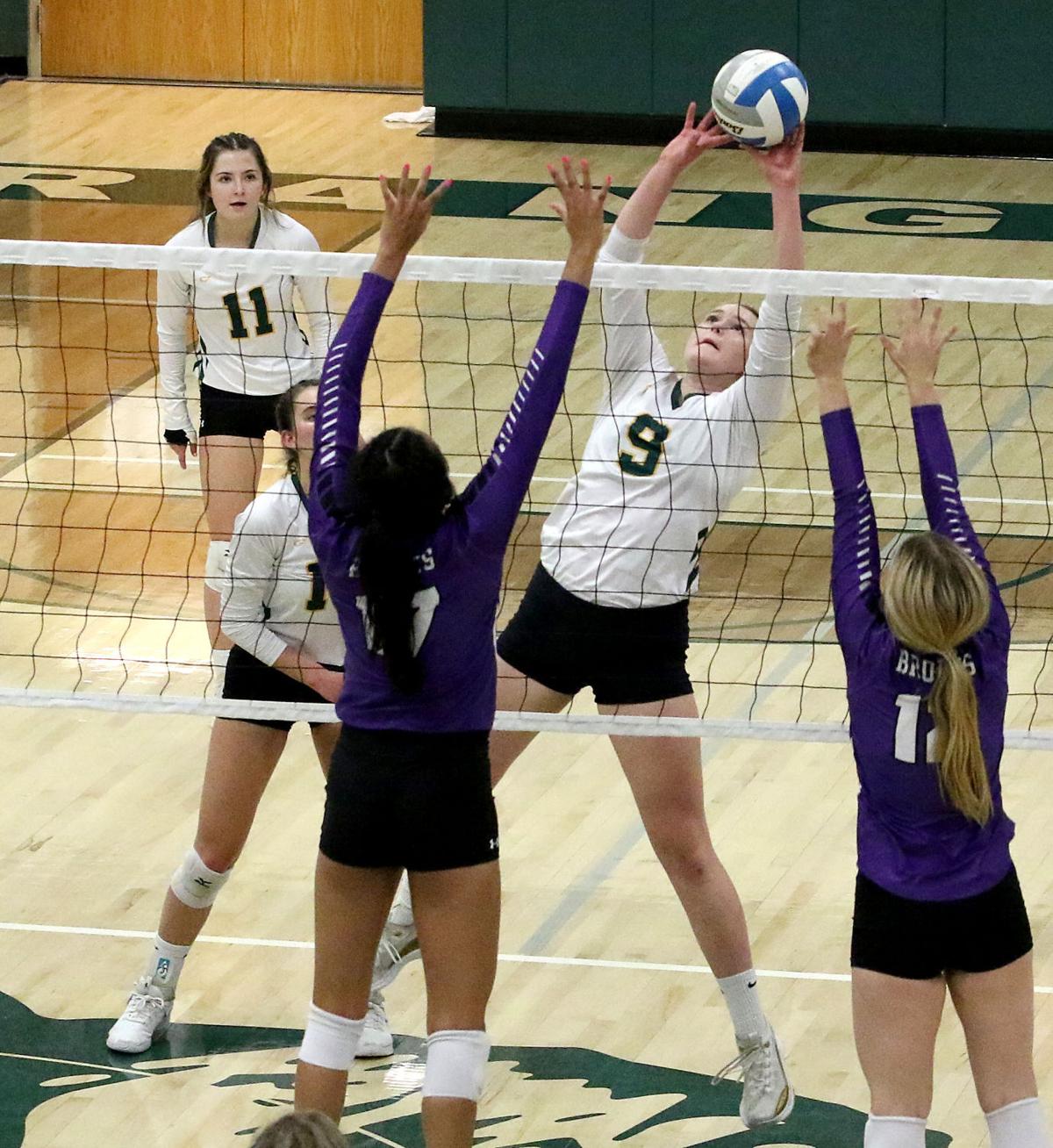 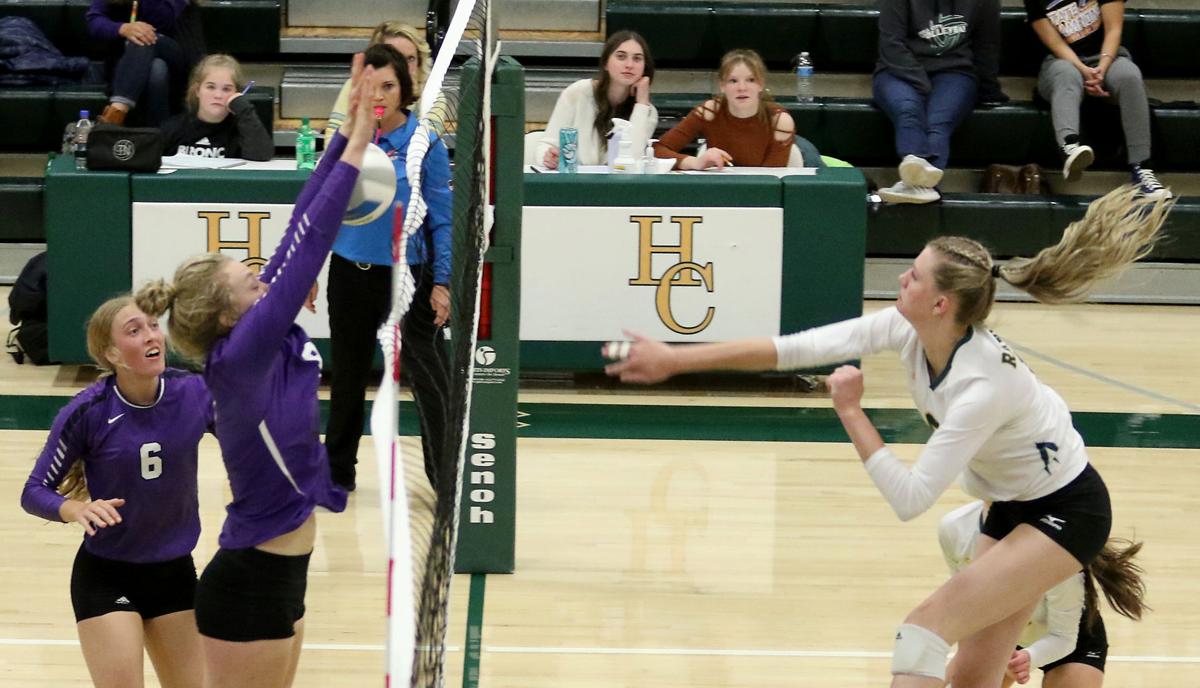