The Hot Springs boys basketball team finally got to practice a little Saturday morning in preparation for the West River Tournament title game later in the night against Faith.

Apparently it helped, as the Bison won the tournament, now in its 40th year, going into overtime before prevailing over the Longhorns 54-47. Hot Springs outscore Faith 9-2 in overtime to pick up its sixth West River Tournament title.

“The boys played hard and I was happy with the way they were able to overcome this tournament,” Hot Springs head coach Aaron Noteboom said. “We had some guys come up a little sick early this week, and we had some issues with not being able to practice because of school. Coming into this tournament with no practices wasn’t ideal, but I was glad to see how the boys responded.”

Although the Bison led for much of the game, it looked as if the busy last three days were going to catch up to them as Faith battled back from an 11-point deficit to force overtime. Momentum, however, wasn’t on the Longhorns side despite that rally, as the Bison controlled the five minutes of extra basketball.

Hot Springs (8-1) sophomore Camron Maciejewski said the team’s defense and bench came through, especially in overtime, and a couple of critical shots offensively made sure they got there.

“Playing three days in a row definitely wears you down, but once you are there you don’t feel it,” Maciejewski said. “You just talk on defense and really, you’re fine.”

Faith (6-4) had the hot hand early and led 6-2 thanks to a rare 4-point play by sophomore Jackson Schauer, but Hot Springs responded with the final 10 points in the first quarter, with Maciejewski and sophomore Josh Kleinsasser scoring four points each.

Faith hung around in the second and led 15-14 after four points from Schauer and two free throws by sophomore Caden Selby, who also hit a 3-pointer to open the quarter.

With a minutes remaining in the fourth, Selby’s steal and layup tied the game at 45-45, and both teams missed out on chances to win in regulation. Faith junior Jess Harper missed a short jumper at the buzzer as the game went into overtime.

Preston Iverson opened OT with a 3-pointer and a layup and the Bison never looked back. Hot Springs closed by hitting 4 of 6 from the free-throw line to clinch the win.

“We got the shots we were looking for. Sometimes they go in and sometimes they don’t,” Faith head coach Travis Grueb said. “At the end of regulation, I thought we did a great job of getting a stop and coming down and getting a good 15-foot jump shot to win. Our kids were battling, but we really didn’t have our good stuff tonight.”

After wins over Moorcroft, Wyoming (59-43) and Upton, Wyoming (62-61), Grueb said he felt like they were ready to go against a good Hot Springs squad, but the three games likely took its toll.

Schauer led all scorers for the Longhorns with 17 points and Selby added 11 points.

“I told the guys that we looked like we were giving the effort, but it didn’t seem like we had that extra bounce and that extra gear, but they were still battling,” he said. “But three games in three days, and in the championship night is where you want to be to give yourself a chance.”

Maciejewski, who had 12 points, as did Preston Iverson, finished the tournament with 41 points for Most Valuable Player honors.

“It really comes from hard work, facilitating on the floor, hitting big shots when they come to you,” Maciejewski said.

Noteboom said he thought his team did a good job of playing unselfish basketball, moving the ball and finding the mismatches where they were on the floor.

“We have a few guys on this team who can shoot the ball, and they are starting to come into their own, starting to grow and mature as basketball players and as young men,” he said. “It is a lot of fun to watch.”

Hot Springs advanced to the title game with two close wins, 60-56 over Wall and 47-43 over New Underwood. The Bison return to action Monday when they host Alliance, Nebraska.

“Anytime you can win the West River Tournament, it is a boost for the guys at mid-season and it gives you that tournament atmosphere," Noteboom said. "Which is an invaluable experience.”

Faith has some time off before hosting Potter County Jan. 25.

“Losses don’t hurt as much now, so we can learn from it and get ready to go in March,” Grueb said.

Preston Iverson and Grill were also named to the All-Tournament team for the Bison, as were Schauer, Selby and Corbin Mackaben for the Longhorns. Also on the team were Luca Brooks, Reece Barritt and Nathan Baker, all from Upton; Linkin Ballard from New Underwood, Reid Hansen and Brodi Sundall from Wall and Cole Stripp from Moorcroft.

A 7-year-old Texas girl has been found dead two days after being reported missing. A FedEx driver who made a delivery to her home shortly before she disappeared was arrested in her death. A  tip led authorities to the man. 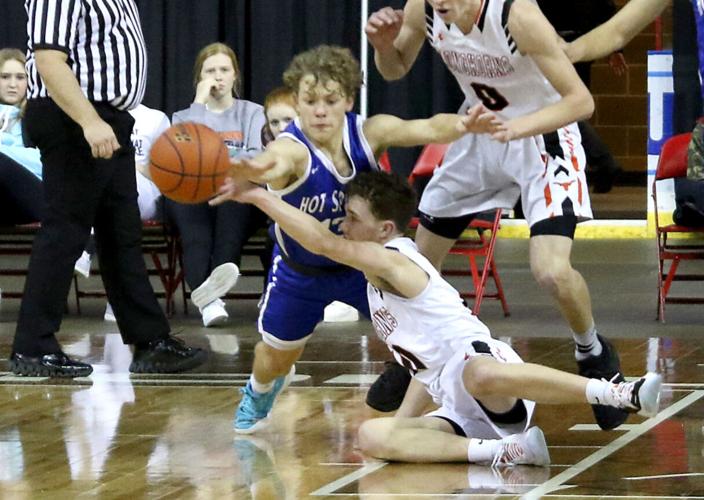 Faith point guard Jackson Schauer (right) controls the ball on the floor and passes around a lunging Preston Iverson of Hot Springs late in the fourth quarter in the Bison's overtime win over the Longhorns in the championship game of the West River Tournament Saturday at The Monument Ice Arena. 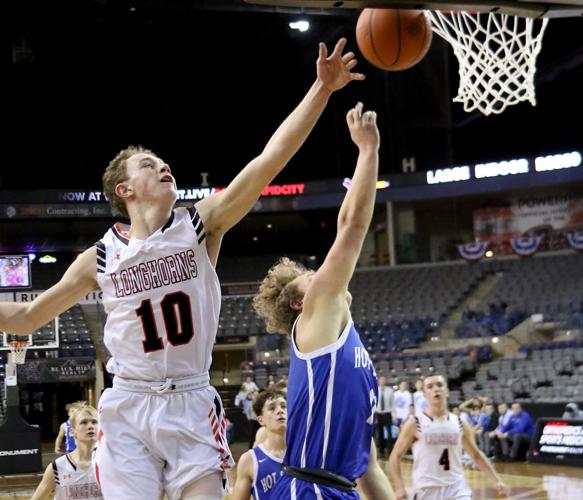 Faith point guard Jackson Schauer (10) hustles back on a fast break to block the shot of Hot Springs' Landon Iverson (right) in the championship game of the West River Tournament Saturday night at The Monument Ice Arena.